The Offer of the Gospel and the Mandate for Missions

The Offer of the Gospel and the Mandate for Missions

And he said unto them, Go ye into all the world, and preach the gospel to every creature.

To the evangelical world of our day Calvinism seems necessarily to stand at cross purposes with the mission mandate of the church. If people are unconditionally chosen and necessarily saved, why should anyone do mission work? God will do it all. He doesn’t need us. Why should we try?

When then we go a step further and deny that the gospel should be offered, that is even more disconcerting. If you can’t as much as offer salvation to people, what is there left? The Protestant Reformed reputation as a church that doesn’t believe in missions may be mistaken, but it certainly is widespread; and it is well that we should clarify our position on this point.

To begin with, we have to understand the ramifications of the word “offer.”

At the time of the Reformation Latin was the language of theology, and the word offero had a simple, basic meaning. We find it in our Latin dictionary yet, “to bring before, to exhibit, to obtrude.”¹ That was what Calvin meant with it; and that was what that great international company of theologians who gathered at the Synod of Dordt understood as well. So it appeared in their Canons, as we read in Head III, IV: Art. 9, “It is not the fault of the gospel, nor of Christ, offered therein . . . .” And when we examine the overall context of the Canons, we learn precisely what that meant, II: 5, “Moreover, the promise of the gospel . . . together with the command to repent and believe, ought to be declared and published to all nations, and to all persons promiscuously and without distinction, to whom God out of his good pleasure sends the gospel.” And again in III, IV: 11, “But when God accomplishes his good pleasure in the elect . . . he . . . causes the gospel to be externally preached to them . . . .”

These men saw the gospel as a message of truth given to them by revelation from God, a very special blessing, a hidden treasure now revealed, a pearl to be valued above everything else. With this message God comes and makes Himself known to us, reveals as much of His greatness as we can endure, and thereby draws us into communion with Him. That is its power; and out of it arises the strength of the Christian life. But with it comes a responsibility.

We as children of God are told by the Scriptures, even as we are inwardly moved by the Spirit, to take this word which has worked so wonderfully within us, and to proclaim it into all the world. Our calling is toexhibit it, to set it before everyone to whom God brings us in life, or, in the Canons’ own words, “the gospel . . . ought to be declared and published to all nations, and to all persons promiscuously and without distinction, to whom God out of his good pleasure sends . . . .” This is Gods command; and, even while using us as messengers, it remains His ‘work. He knows to whom He will have the gospel brought; in His providence He provides the opportunity to bring it; and His word holds within itself the power to accomplish the purpose to which He sends it. It will find those whom God desires, speak to them; ascertain and prepare their hearts, and draw them into fellowship with Him; even while others by that same word are offended, hardened, and repelled. God will have His will done, often in ways far beyond what we can comprehend; and it is simply our privilege to serve as His agents, His ambassadors, in bringing, that word.

Calvin understood this; and his little town of 15,000 people sent out missionaries by the scores. Unceasingly they went, some into inconceivable dangers, some to almost certain death, and some as far away as the distant shores of Brazil. Their calling they knew. God had given His word; they were to bring it as precisely as they could, and it would accomplish what God willed. There was nothing for them to change, nothing to adapt, and certainly nothing to add. God’s word is to be brought as it is, and nothing else.

Even as they were doing that, however, another viewpoint was coming to the fore. It had its roots and its mentality in the humanism which filled the Universities. In many ways it seemed closely related to the Reformation and served it. Humanistic scholars, having rediscovered the ancient world, restored study in the original languages of Scripture, recovered and republished its early manuscripts, and gave good directions as to how the text of Scripture can best be interpreted and understood; but at heart there was a difference.

In their fascination with ancient civilizations, the scholars of humanism had come to the conclusion that it wasn’t so much what the ancient writers said that mattered as how they said it; and they put their effort into trying to recapture the secret of their rhetorical and dialectical styles. Those ancient poets and philosophers had been effective, they concluded, because they had known how to use words. They could speak well; they could hold the attention of the people; and they could persuade them how to live. That was the important thing.

The consequence was, however, that these humanists also began to take a different view of the Christianity in which they lived. No longer did its doctrines appear to be a primary concern. In fact, these doctrines didn’t actually seem to be that different from what the Greeks had concluded through their reason; or, for that matter, what any good scholar can discern almost intuitively. In turn, truth itself is not that definite, if not often variable, and even contradictory to the human mind. But the crucial thing is not doctrine but practice. Theology is best defined as “the science of living well”;² and its first problem, how to express Christianity in a way that the lives of people will be affected. If people can be shown persuasively the value of good living, and convinced to alter their lives accordingly, that is what counts.

Beneath this all, of course, was one basic presupposition, that of the freedom of the human will. They were all convinced, following the route of philosophers through the ages, that this was a principle that must never be relinquished. To every person must be left final control over his own life and will; and the only thing any one else can do, even if He be God, is with good and convincing words to influence him how to live it.

The main line reformers—Luther, Calvin, Beza, etc.—recognized this for what it was, and would have nothing of it. But there were others in the Reformed churches who were attracted; and they were only too ready to bring this viewpoint in. Beginning in Germany and France it spread, through the lowlands, into England, and finally to the colonies of the new world. James Arminius, a precocious young Amsterdam preacher, was one of them; he wanted something more attractive and practical than what he felt he had learned in Beza’s Genevan Academy. Nor was he alone; many, even of those who remained theologically more sound than he, began to focus their attention on practice in life as the primary thing, and the motivating of people their chief concern.

It isn’t our purpose here to trace this through historically; but we can see the effect by looking at the word “offer” once again, particularly as it is now used in modern English. A whole new connotation has arisen around it, as we find it defined in a present day dictionary: “an undertaking to do an act or give something on condition that the party to whom the proposal is made do some specified act or make a return promise.”³ No longer is an “offer” a simple exhibition or presentation to others; it has become a means of rhetorical force to move people to change. But always the supposition is there, they have the final control; and they have to be satisfied. Something attractive, something alluring to them, must beoffered if they are to be drawn into modifying their ways.

And the result is not hard to see, especially as it is evidenced in modern evangelical circles. Doctrine—the teaching of the Bible—is not of great concern. It can be used if it will serve a purpose. But the question again isn’t what, but how; how can the gospel—whose content can be taken for granted—beoffered in such a way that it will be attractive? That is the question, for it is the crucial link in bringing men to salvation. God is stable, He will do His part, but people have to be satisfied if they are to work along. That’s the crux of the matter, regardless even of how it may reflect upon God.

To this we object.

It’s all just too presumptuous. Man isn’t in control of his life, regardless of what he may think. His sin is a bondage which he cannot break; and we aren’t clever enough to lure him to do it. We may catch his attention for a moment; but that doesn’t give a new heart. Only one power is able to change the soul and save it, that pointed out by Paul in Romans 1:16, 17, “For I am not ashamed of the gospel of Christ: for it is the power of God unto salvation to everyone that believeth: to the Jew first, and also the Greek. For therein is the righteousness of God revealed from faith to faith: as it is written, The just shall live by faith.” And the setting forth of that gospel is our only mission mandate. 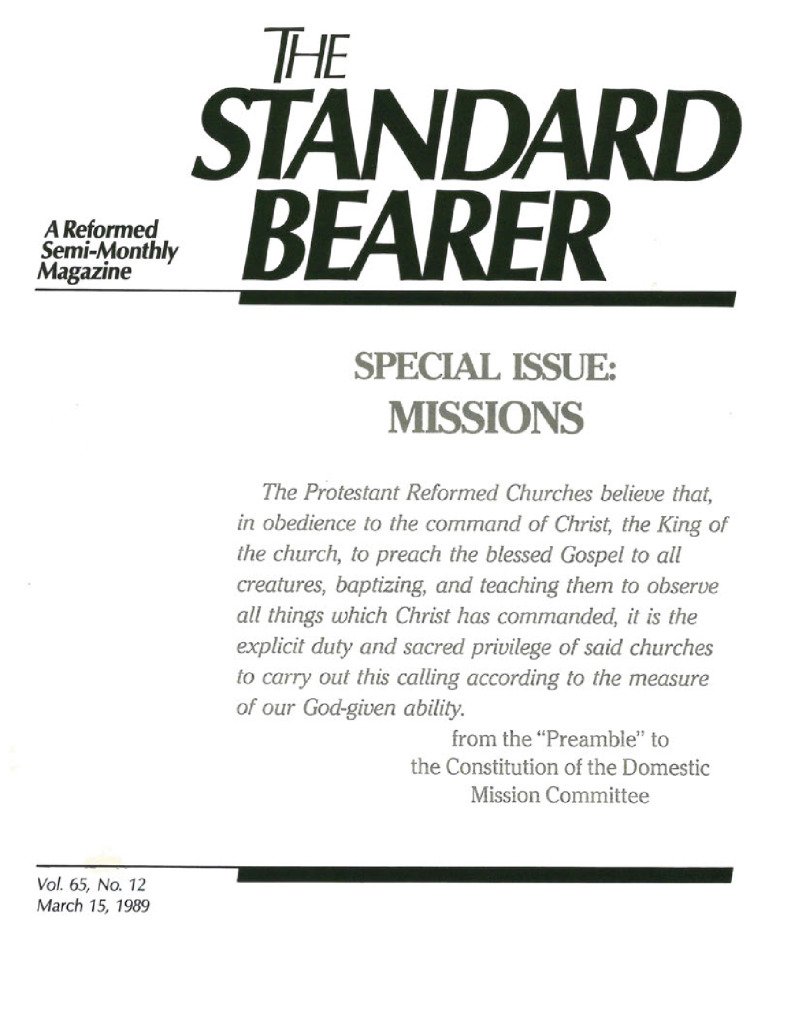