The Obedience of Christ

The Obedience of Christ

It would not be possible to think of Christ in His death on the cross as having done but one thing for us, namely, to have paid the just penalty of our sin. He did much more than that. If all He had done by His death was nothing more than to pay the penalty due against man’s sin, where would man be? He would certainly not be back where Adam was when he was in the state of rectitude where he daily paid God the debt of obedience he owed Him. For Adam had fallen and had brought moral and spiritual ruin upon himself and on all mankind. So that since the fall of man, he has been incapable of any good and prone in all wickedness. Since then he has been unable to render obedience to the law of God. If then he were absolved from the penalty of the law and nothing more, he would still be a sinner before the law, helpless to keep it? never keeping it, but always breaking and dishonoring it. At the same time he would never be called to account for any falling short of God’s glory or His law, since he is delivered from its penalty. If that were all Christ did for us in His death, then we would not be saved from our sins, but in our sins. Nor would God be in an honorable position. For His law would not be magnified. Man would be delivered from wrath, but not gifted with eternal life, and in no position to obtain eternal life. For sin must be removed before eternal life can be bestowed. There man would be in no danger of punishment, but would be besmirched with the defiling effects of sin. He would never be cleansed from an “evil conscience.” (Heb. 10:22) He would be worse off than Adam ever was. For after the fall, Adam had the sacrifice, the altar, the coats of skins and, so, restored fellowship with God. Adam had lived under the divine demand of perfect obedience, which he personally rendered. But even this perfect obedience of his had no reward such as eternal life pronounced upon it. Adam was a friend and servant of God. A servant only does what is his duty to do. Fulfilling his duties does not earn him the right to, or qualify him for the reception of, eternal life. That would have to be purely the reward of grace. After the fall, he still lived under the demand of perpetual obedience, only that obedience conceived of now not personally rendered (that no longer being possible), but as representatively fulfilled in and by Christ. Christ was his only hope.

Christ not only had to pay the penalty of Adam’s sin and the penalty of all our sins, but He had to bear those sins and take them away—if man was to be left any hope at all. The Lord had not only to pay the penalty of the law, but also to keep the demand of the law. He came into the world to save us from our sins as well as from wrath. That He did by His death, but also by it He purchased for its beneficiaries a perfect righteousness, so that gifted and clothed with His righteousness they are in the sight of God as righteous as He, and cannot, as Adam could have before the fall, become unrighteous. His death then raises us out of our spiritual death to a position higher than Adam ever had. Eternal life never could have been possessed for the rendering of perfect obedience. Obedience is that which a servant owes his sovereign. Giving faithfully what is owed cannot in any way entail eternal life. But if a representative could not only pay what was owed, but in doing so pay a price of infinite value and worth so that there would be purchasing power sufficient to procure eternal life, then his clients would become heirs of eternal life. This Christ did. He by His perfect obedience merited, won and bestowed eternal life on them.

But the popular religion of the day in the world is that of Pelagianism, the philosophy of humanism, the religion of the “man on the street.” According to it, Christ’s death has a moral influence on mankind. Every man has a spark of divinity in him, is by creation and nature a child of God, but that spark needs to be fanned into flame, and the wandering child needs to return to his heavenly Father. By an act of his own will he had strayed from his Father, and by an act of his own will he must return. But what shall induce him to take steps to return? Everything from God’s side is open for him to make such a return. Only his own follies have clogged the way. He could hurdle these barriers if he could be made to see again that God is still his Father, still loves him, and is always more ready to forgive than man is to be forgiven. Then man would be restored to the favor of his Father and the joys of his Father’s house.

What is it which really gets to man so that he will return to the Father, His house and the benefits of sonship? He must look at the cross of Christ, exposing himself to its influences. Jesus was a son of God; indeed, because he was such a unique exemplar, he could even be called the son of God. When he went so far as to die on the cross there was revealed the highest manifestation of God’s love for a wayward humanity. Feel the impact of that love and all opposition to the Father should be overcome. The cross, if man will only contemplate it, will have such a persuasive influence on him. In keeping with this thinking of the world, the one who died on the cross was not true God, and did not need to be, in fact, that would only be a hindrance, putting him that much farther from us. He was a third party (cp. Russellism, where Christ is neither God nor man, but a third something to reconcile both!) who by his, supreme example of self-sacrifice would show the way (cp. Christian Science’s view that Christ is not the Way, but merely the way-shower!) for man to get back to God. If man will only get inspired by that example he will discover that he has attained to the higher life of the sons of God. The cross becomes to him the pathway leading from moral decrepitude to moral integrity.

Many of the religious books on the market and many of the modern religionists speak very freely about the cross of Christ. But is not the view of the cross they present that just set forth above? They will readily say that His death was redemptive, just as they will say that Jesus was divine. They say that Jesus was divine because man is divine. So they say that Christ’s cross is our cross, and so his sufferings were redemptive. For after all, our sufferings are also redemptive. Christ shows the way of redemptive suffering. Many follow in his train to purchase to themselves the good degree of a life elevated above poverty, sordidness and strife. This is also the religion of our politicians from the president on down.

This is the modern and prevailing view of the cross—merely an example of a general principle of self sacrifice meant to be patterned after in individual instances of practice. Salvation then is walking in the way of the cross, so conceived. This means, of course, that it is not Christ’s cross that saves us, but our cross. Christ’s cross has power to influence to walk in the way of it, but it is our cross that has power to save once we walk in that way. Then it is not Christ’s walking in the way of the cross, but ours which ultimately saves us. The blood of Christ does not save a man. It simply arouses him so that he may get busy and save himself. Disguised with familiar Christian terminology, and decked out in modern attire, it is nevertheless the old Pelagianism and the old moral influence theory of the atonement.

The governmental theory is no better. It is hardly more than another form of the moral influence theory. It holds that the cross of Christ was not necessary to satisfy the offended, eternal justice of God. It was necessary that good order in the world be preserved. Sinners must not get the idea that they can sin and riot with impunity. If men go on in violence and corruption unrestrained, the world will go to pieces morally and physically. That would not be for the greatest good of the greatest number. So God set up the cross to teach that sin is with Him a serious matter, to show what sin deserves, and what He could justly do to the sinner. Thus the cross is meant to act as a restraint on sin so that the world may be preserved. This enables God to offer salvation on much easier terms than on that of perfect obedience. He offers it on the terms of “faith.” Then “faith” will look at the cross, see what man deserves, what God could have done to him, and so be moved to quit the life that disturbs the proper government of God’s world. Such philosophizings deny the justice of God, deny that justice demands punishment of sin (a very prevalent dream today!), deny the holiness of God, and deny the love of God which went to such cost as to make the body an soul of His Son a sacrifice for the sin of His people. 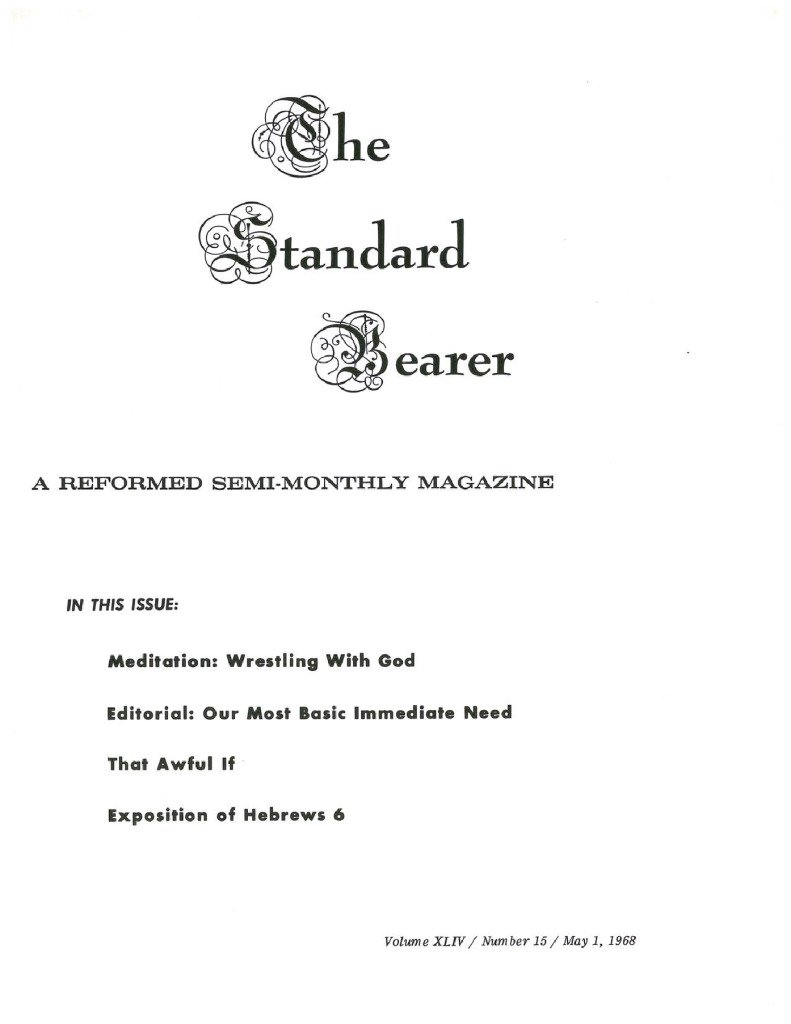