Article 11—We look for the resurrection of the dead, Article 12—and the life of the world to come. Amen.

In Article 11 the early church confessed her faith in the resurrection of the dead.

The reality of such a resurrection was denied in the history of the early church by the world of pagan religion and philosophy. The prevailing thought of the pagan world was that all things physical and material, the human body included, are inherently evil. Hence, although a certain immortality of the soul was acknowledged, there was no room for a bodily resurrection. The body was considered to be the prison house of the soul. At death the soul was finally liberated from the body, never more to be brought back into the bondage of the body. At death the body was happily destroyed forever. It was quite evidently this thinking that Paul encountered in Athens on his second missionary journey. “Then certain philosophers of the Epicureans, and of the Stoics, encountered him (Paul). And some said, What will this babbler say? other some, He seemeth to be a setter forth of strange gods: because he preached unto them Jesus, and the resurrection” (Acts 17:18). Continuing through this chapter we find that the Athenians brought Paul to the Areopagus on Mars’ hill to hear more of his doctrine. “And when they heard of the resurrection of the dead, some mocked: and others said, We will hear thee again of this matter. So Paul departed from among them” (Acts 17:32, 33).

A similar position concerning the inherent evil of all things material, and with that a denial of the resurrection, was also to be found with certain heretical groups cast out of the Christian church at this time. This was true for example of the Gnostics, as well as the Manicheaens.

Over against all this the early church maintained and confessed the Biblical teaching of the resurrection of the dead.

The early church fathers did not have so much to say concerning the life of the world to come. This is no doubt because the Scriptures do not give a very clear picture of what this life will be. The Scriptures tell us that this life is everlasting. They tell us that this life will consist of perfect fellowship with God, not marred by the sins of this present time. It will be a life without suffering and pain. But this life belongs to another age and a new creation. Hence, it belongs to that which eye has not seen, nor ear heard. Neither has it entered into the heart of man to conceive. The Scriptures are content to assure us that this future life is glorious beyond our wildest expectations. Certainly the present sufferings which are necessary to prepare us for this life are not worthy to be compared to the glory and bliss of this life.

The Scriptures make the future glory a matter of faith. And the early church acknowledged this future glory as an object of her faith in the final article of the Nicene Creed: “(We look for) . . . the life of the world to come.”

There are two related subjects that are not touched on specifically in the Nicene Creed but are very closely related to the subject at hand. It would be worth our while to look at these briefly.

The first subject deals with the ultimate fate of the ungodly and impenitent. In the early church three positions were held. There were those who taught the annihilation of all the wicked. In other words, the ungodly either at death or at the day of judgment are destroyed body and soul so that they simply cease to exist any more. Then there were those who maintained a final restoration of all men to holiness and happiness. In other words, the ungodly after this life will be given a second chance and will all ultimately be brought to repentance and salvation. Finally, there were those who taught the Biblical truth of everlasting punishment of the wicked in hell where according to body and soul they will come under the eternal wrath of God for sin. Those who held to this position were by far in the majority. And in due time this became the sole view of the church, until the rise of the heresy of universal salvation in the last few centuries.

The second related subject of interest deals with the state or condition of man’s soul after death but before the final resurrection, which we have come to call the intermediate state.

At first there was little thought or discussion on this. This was due to the anticipation of a quick return of Jesus Christ from heaven. But as time went on and Christ did not come, the church began to consider this matter.

The ideas and teachings of the early church fathers on the intermediate state were very vague. They spoke of hades or sheol, terms which the Bible uses to describe the state of the dead. The church fathers taught that in sheol the righteous enjoy a measure of reward not equal to their future glory in heaven, and the wicked suffer a degree of punishment not equal to their future torment in hell. Some spoke of a purifying process that takes place for the righteous in sheol. Some have understood this to be the beginnings of the Roman Catholic doctrine of purgatory. However, this is not the case. The doctrine of purgatory teaches that the righteous must suffer after death to make payment for sins committed in this life. The doctrine of purgatory is a doctrine that arose out of the error of work-righteousness. This however was definitely not the teaching of the early church fathers. They taught rather that through some mystical process the soul was purified from the defilement of sin and thus prepared for the life in the world to come. They viewed the intermediate state as a place not for justification but sanctification. Finally, the church fathers also spoke of paradise, which is far above sheol. It was to paradise that Jesus ascended. Into paradise also enter the souls of the martyrs. Yet paradise is still not the final glory for God’s people. Final glory is the life of the world to come.

This is a very clear expression of the Christian hope. The Christian hope is a confident expectation and an intense longing for the final salvation to be revealed in the day of Jesus Christ. Those who live in hope live in the expectation that Christ will one day come from heaven to make all things new. They are confident of a final resurrection into heavenly glory. They long for the life of the world to come. Their constant prayer is, “Come, Lord Jesus, come quickly.”

The early Christian church was very strong in this hope. Their hope in the resurrection and future glory was no doubt strengthened by the persecution she had endured for the first three hundred years of her existence. There is nothing like persecution for Christ’s sake to turn the eyes of the church to her future glory. How the early church looked for the life of the world to come! To this living hope she gave expression in these concluding articles of her creed.

What a fit conclusion to the early church’s confession.

All the great doctrines of salvation revealed in Holy Writ find their climax in the resurrection unto glory. Jesus Christ was sent of the Father into the world, suffered and died, was raised again the third day, ascended into heaven for one purpose—that one day He might return and through the resurrection glorify His people in a new creation. What a glorious salvation God has for us in Christ!

We have seen that the Nicene Creed was more than a simple statement of doctrine. It was a living confession that arose from the believing hearts of God’s people. The truths of this confession were near and dear to the early church. Her members embraced them and cherished them. They fought for them and defended them. Many even died for them. 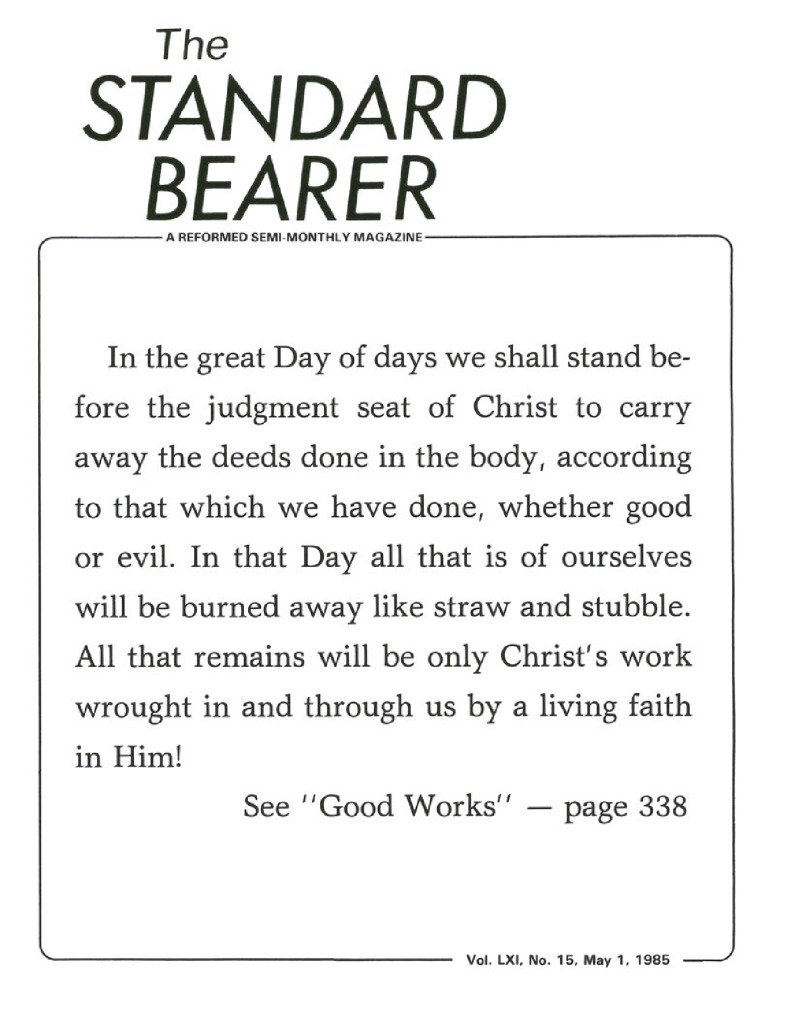