There is quite a bit of history behind this 8th article of the Nicene Creed.

In its original formulation by the Council of Nicea in 325 this article briefly stated, “And I believe in the Holy Ghost.”

You perhaps recall from earlier articles that the Council of Nicea was convened to settle the great trinitarian controversy that raged in the early Christian church. The controversy centered chiefly in the identity of Jesus Christ. There were basically three different positions in the church. There was first the orthodox position which maintained that Jesus Christ is truly divine. He is the eternal Son of God, one in essence with the Father. Then there were the Arians, followers of Arius, who maintained that Jesus was not God in the same sense as the Father. He is god-like but not truly God. For He is created of the Father and possesses a different nature or being than the Father. Finally, there was the middle party, called the Semi-Arians, who maintained that although Jesus is truly divine, the eternal Son of God, He is not one in being with the Father. His being is rather like that of the Father.

At the Council of Nicea, the orthodox position prevailed as the church confessed in the 2nd article of the Nicene Creed that Jesus Christ is “the Son of God, begotten of the Father (the only begotten, i.e., of the essence of the Father, God of God, and) Light of Light, very God of very God, begotten, not made, being of one substance with the Father; by Whom all things were made (in heaven and on earth).”

This same council concluded the Nicene Creed with a brief confession concerning the Holy Spirit: “I believe in the Holy Ghost.”

There are several reasons for the brevity of this confession. First, the Scriptures do not speak only of the Father and the Son. They speak of Father, Son and Holy Ghost. Time and again these three are mentioned together. And so, having confessed faith in the Father and the Son, it was deemed necessary also to express faith in the Holy Ghost. However, the identity of the Holy Ghost was not the issue at this particular time. The issue was the identity of Jesus Christ, God’s Son. Besides this, the church at this time was not even clear as to the true identity of the Holy Spirit. Some thought the Holy Spirit to be a creature of God. Others leaned to the position that the Holy Spirit was no person at all, but simply a power or attribute of God. And so the Council of Nicea was content with the simple statement, “I believe in the Holy Ghost.”

However, controversy continued to rage after the Council of Nicea. The Arians and some of the Semi-Arians maintained that they had been pressured to endorse the statements of Nicea. Besides that, there was a confusion in terminology. This was due to an inability to distinguish properly between the concepts “person” and “essence.” Because of this, many did in fact endorse the truth of Nicea but balked at the language used to express the orthodox position. The upshot of all this was that over the years the Semi-Arian position and terminology began to prevail in the church. And for a while it appeared as though the orthodox position of Nicea would be lost to the church. However, through the diligent work of a handful of dedicated men of God the proper distinctions were made and the church was won over to the original position and language of Nicea.

As the issue of the Son’s identity became more settled, the question of the Holy Spirit’s identity came more to the fore. The church saw that she must also come to grips with the true identity of the Spirit as she had done with the Son. There were various positions held in the church. There were those who maintained that the Holy Spirit is merely a power or attribute of God. This was held even by some who embraced the orthodox position of Nicea on the true divinity of the Son. Then there were those who taught that the Holy Spirit was created by God and thus merely a creature. This had been the original position of the Arians, who had also taught the same concerning the Son. The Semi-Arians, who after Nicea came to dominate the church for some time, also maintained the same teaching concerning the Spirit. They taught the eternal generation of the Son, but the creation of the Spirit. As late as 380 Gregory of Nazianzen wrote, “Of the wise among us, some consider the Holy Ghost an influence, others a creature, others God himself, and again others know not which way to decide, from reverence, as they say, for the Holy Scripture, which declares nothing exact in the case. For this reason they waver between worshipping and not worshipping the Holy Ghost, and strike a middle course, which is in fact, however, a bad one.”

The additions to this 8th article by the Council of Constantinople were designed to establish the true divinity of the Spirit.

The question arises why the Council of Constantinople did not use some of the language it used to assert the divinity of the Son to confess the divinity of the Spirit. Article 2 of the Nicene creed asserts the true Godhead of the Son by describing Him as “very God. . .being of one substance with the Father.” Certainly, these same descriptions are applicable to the Spirit as well. He too is very God, of one substance with the Father. We would conclude therefore that having established the true identity of the Son with these terms, the early church fathers would also have used these same terms to describe the Spirit. However, according to some church historians, the Council of Constantinople chose not to use this terminology to avoid offending some of the more “conservative” Bishops of the church. Evidently there were still some in the church who were not ready to apply this very specific terminology to the Spirit. Hence, the early church chose to assert the true divinity of the Spirit in other ways.

To assert the true Godhead of the Spirit, the early church first confessed that the Holy Spirit is “Lord.” The term “lord” emphasizes the twofold idea of ownership and therefore of rule. A lord is one who owns another. And therefore, because he is owner, he is also ruler over that which he owns. This term, with this twofold meaning, is applied in the Scripture to a slave-owner (cf. Parable of Talents, Matt. 25:14-30). This same term is also applied to God Himself in a host of different passages. We even read quite frequently the expression “Lord God.” That God is Lord emphasizes that, as the Creator, God is divine Owner of all things. The heavens and the earth with all that they contain belong to God. All the silver and gold is God’s. Even the cattle on a thousand hills belong to God. And so He is also the absolute, sovereign Ruler over all things. To God belongs not only the right but also the power to impose His will upon the creature. And His is also the right and power to maintain His will by rewarding the good and punishing the evil. He is Lord of lords and Ring of kings.

And now in this same sense the early church confessed that the Holy Spirit is Lord. By this the early church meant that the Holy Spirit, with the Father and the Son, is the Creator, Owner, and Ruler over all and is therefore truly God. What the Council of Constantinople sought to confess with this term is the same as we find in verses 17 and 18 of the Athanasian Creed: “17. So the Father is Lord: the Son Lord: and the Holy Ghost Lord. 18. And yet not three Lords; but one Lord.”

In the same breath the writers of the Nicene Creed also confessed that the Holy Spirit is the “Giver of Life.” The word found in the original Greek of the Nicene creed has the meaning of “to cause to live, to make alive (quicken), to give life.” This same word or term is used in Scripture first to define God the Father and God the Son. Thus, for example, we read in I Timothy 6:13 of “God, Who quickeneth all things.” In Romans 4:17 we read of “God, Who quickeneth the dead.” In John 5:21 we read, “For as the Father raiseth up from the dead, and quickeneth them; even so the Son quickeneth whom He will.” In all these and other passages God the Father and God the Son are designated as the “Giver of life.” And this is quite obviously a distinction that is reserved solely for God. Who else has to the power to give life, to quicken from the dead, except God? But now this same distinction is also applied in Scripture to the Holy Spirit, In II Corinthians 3:6 we are informed that the Spirit giveth life. In John 6:63 Jesus tells His disciples, “It is the spirit that quickeneth.” And the spirit here, although not capitalized in the KJV, is the Holy Spirit. InRomans 8:11 we read that the Spirit shall quicken our mortal bodies. The Spirit therefore also is the “Giver of life” and thus is truly divine with the Father and the Son. It was evidently this line of thought that prompted the Council of Constantinople to confess the true Godhead of the Holy Spirit by acknowledging Him as the “Giver of life.” In short, He is God because divine works are ascribed to Him. 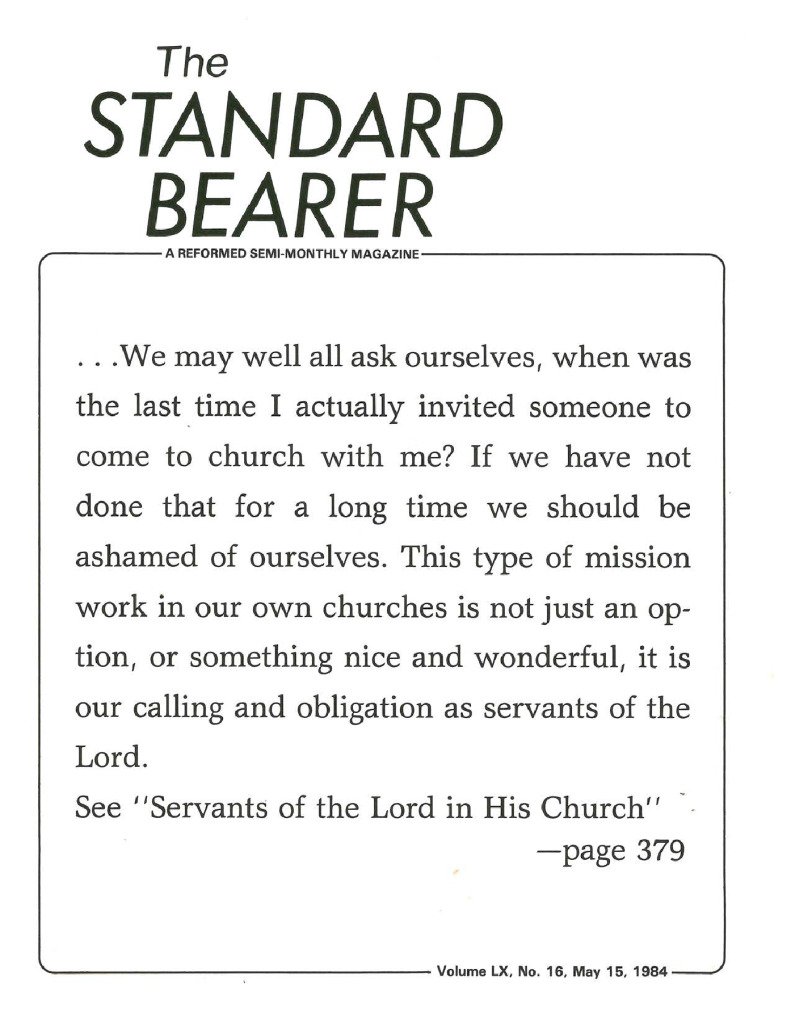