This is not the first time the issue of the extent of Christ’s atonement has come up for debate in the CRC. The appeal of Rev. Neal Punt raises the history of Harold Dekker, who taught that God loved all men with a redemptive love and that the atonement of Christ was inherently universal. The most that the CRC Synod of 1967 could bring itself to say about the clearly Arminian Dekker was “that Synod admonish Professor Dekker for the ambiguous and abstract way in which he has expressed himself in his writing on the love of God and the atonement.”¹

It is not the appearance of the issue again that is notable. With a miserable decision like that, the issue was bound to come up again, and it did.

Rather, the Punt case is worth noting because of the significant increase in the acceptance of the error of universal atonement evident in the handling of the case.

In his latest book, Christ, Baptism, and the Lord’s Supper, Rev. Vander Zee blatantly teaches universal atonement. According to the Punt appeal, among his many erroneous statements Vander Zee wrote:

Christ’s birth, life, baptism, death, resurrection and ascension was (sic) accomplished on behalf of everyone, everywhere.

God’s act of atoning work in Christ includes all people. What God has done in Christ embraces absolutely everyone.

An Arminian through and through, Vander Zee also teaches the freedom of the human will and the falling away of the saints:

While God’s act of salvation in Christ, the second Adam, includes all of the first Adam’s descendants, this does not mean that all will be saved…. God, who respects human freedom, apparently allows for the possibility that some of Adam’s sons and daughters who are included in Christ may turn their backs on the truth and reality of what God has done.

About these quotes Rev. Punt said:

Neither Vander Zee, nor Classis Holland, nor Synod argued that Vander Zee merely misspoke himself or that I have in any way misquoted them. The quotes say what they say.

Vander Zee’s quotes clearly teach Arminianism— universal atonement, the falling away of saints, the freedom of man’s will to frustrate and to overcome the will of God—and this Arminianism is “the core” of the church’s message to the world in word and sacraments.

Finally, Rev. Punt appealed the decision of Classis Holland to the 2010 CRC Synod. On page 803 of the 2010 CRC Acts of Synod is the following decision regarding his appeal:

B. Recommendation: That synod not sustain Personal Appeal 1.

1. Nothing new or substantive was alleged against the process or the decision of Classis Holland.

2. Classis Holland has done due diligence in this matter.—Adopted

This is all that Synod 2010 had to say about the appeal of a member against an active and influential minister in the CRC who teaches universal atonement in clear violation of the creeds. About that decision Rev. Punt received this report from an official at the synod:

Standing at the line of scrimmage, facing yet another vigorous and clear challenge to the truth of Scripture and the Reformed creeds, the synod punted.

There are a number of notable points about this sad, but predictable decision.

First, this decision is a travesty. If it were not such a serious issue and such a sad decision, we would call it a joke. On the first day of synod, with hardly any debate, with only a few simple lines, the synod unceremoniously booted to the sidelines a man’s appeal regarding denials of the foundation of the Reformed faith.

Involved in the travesty was some strange church polity.

The synod said: “Nothing new or substantive was alleged against the process or the decision of Classis Holland.” The synod ought to know that an appeal to a broader assembly is not supposed to add new things. To require an appellant to bring something new is not fair to the narrower assembly in its original decision on the case. It is not fair to the broader assembly to ask it to treat a wholly new or substantively new case under guise of an appeal.

Even granting that the delegates did not receive the documents, this part of the decision should have stunk badly enough for them to question the advice before they voted.

Wouldn’t someone—anyone—ask: what is the case, what was the decision of Classis Holland, and what was the process that was followed in the case?

Apparently no one did.

Having read in the Acts that the materials of what is called “Personal Appeal 1” were “distributed to the advisory committee members,” I asked Rev. Punt whether his appeal was distributed also to the delegates of Synod 2010. His response:

I am told there were 17 members on the Advisory Committee. They had copies of the appeal just as I sent you. However, the other delegates saw nothing of the appeal. They saw only the brief report that is found on page 803 in the 2010 Acts of Synod.

Following the long standing, but deplorable, practice of the CRC that no personal appeals are printed in the agenda, or apparently distributed to the delegates, the delegates had no opportunity to make an informed decision on the appeal. The synod simply voted blindly on the recommendation of the committee of pre-advice.

Imagine, if you can, a criminal court-case in which the lawyer and the judge disappear into the chambers and reappear a few moments later saying that the police did due diligence in such and such a case and the man accused of murder is not guilty. Then the willing jury of stooges dutifully disappears into the jury room and returns a verdict of not guilty. The case is never heard, the facts are not disclosed, no arguments are made. The jury simply votes on the recommendation of the judge that the man is not guilty.

That is called a kangaroo court.

It is a travesty of justice!

The seventeen members of committee eight that treated the appeal—several women among them—and the delegates of CRC Synod 2010 that voted for this decision made a mockery of the seriousness of the charges, the appeal process itself, the sacred right of a Reformed man to protest and appeal, and the duty of every officebearer to uphold the teachings of the creeds.

The way that the case was handled is a travesty of justice perpetrated at the highest level of Reformed church government on an issue that stands at the heart of Reformed theology. The CRC, with its loud cries for social justice, evidently has justice for every bum, derelict, and foreigner in the world, but has none for a man—a member of the church—who protests the doctrinal errors of a prominent minister in the CRC that are contrary to the very foundations of the Reformed faith as embodied in the three forms of unity, especially the Canons of Dordt.

Third, the actual decision by the CRC on the appeal of Rev. Neal Punt is significant. The synod decided that “Classis Holland has done due diligence in this matter.” By this decision the CRC rejected the appeal of Rev. Punt and exonerated the heretic Vander Zee and his blatant Arminianism. The CRC is officially on record as espousing the error of universal atonement. In fact, universal atonement is, according to Vander Zee, the “core” of the church’s message to the world.

The decision to exonerate the Arminian Vander Zee should surprise no one. This is true particularly for those who hold to the well-meant gospel offer, but still recoil at the thought of universal atonement. Although the Punt case raises the history of the Dekker case, the groundwork for the Punt decision was not laid in the Dekker case of the 1960s. The groundwork for the Punt decision was laid in 1924, when a synod of the CRC adopted the well-meant gospel offer as part of the three points of common grace.

This intimate connection between common grace and universal atonement is constantly denied by the proponents of common grace who still reject universal atonement. A rather recent example of this was R. Scott Clark’s 2004 Table Talk article entitled “For God So Loved the World” (http:// www.ligonier.org/learn/articles/god-so-loved-worldclark/). In that article Clark says,

In attempting the impossible—to harmonize common grace and particular atonement—Clark dishonestly revises the three points of common grace. In his revision the second point of common grace teaches that “God providentially restrains evil.”

Providence was not the issue, and, besides, common grace never said God providentially restrains evil. There never would have been a problem if that was all common grace said. The issue was grace and, specifically, the Holy Spirit’s restraint of sin in the hearts of the reprobate ungodly, so that they are not totally depraved, but are able to do good in God’s sight.

Clark says, too, that common grace teaches that “in His providence, God gives many wonderful gifts to humanity.”

The Protestant Reformed Churches have pointed out ad nauseam that the issue with common grace is not whether God is the provider for all men, or whether He sends to all men good things, or whether this is controlled by providence. God does good to all; He gives to all life, breath, and all things; and this is controlled by His providence. The issue with common grace is God’s attitude in doing good to all men. Does He do that with a favorable attitude toward all men? Are those good things the evidence of His favorable attitude toward them? Are those good things themselves grace?

But most interesting in Clark’s article denying that common grace and particular atonement are mutually exclusive is his deafening silence on one of the main issues of 1924, the well-meant gospel offer.

The first point of 1924 grounded the teaching of God’s general grace toward all mankind in a supposedly creedal teaching of the well-meant gospel offer. That false doctrine directly relates common grace, redemption, and the atonement of Jesus Christ. The decision on the Punt appeal must be seen as the deadly, but inevitable, fruit of the well-meant gospel offer the CRC adopted in 1924.

The CRC went on record as approving the heresy that Christ died for all men, the error that was decisively rejected by Dordt in language that is offensively clear to all universalists: “That Christ by the blood of the cross… should effectually redeem…all those, and those only, who were from eternity chosen to salvation and given him by the Father” (Canons 2.8).

In light of this decision, there are a few serious questions.

Furthermore, when will Reformed church members of those churches protest the teaching of that false doctrine, demand the discipline of those who teach it, or, being rejected, finally leave those churches that teach that heresy?

¹For this and other references to the Dekker case, I point the reader to rfpa.org and the Standard Bearer archives Vol. 44, No. 1ff., in which the editor analyzes the case. 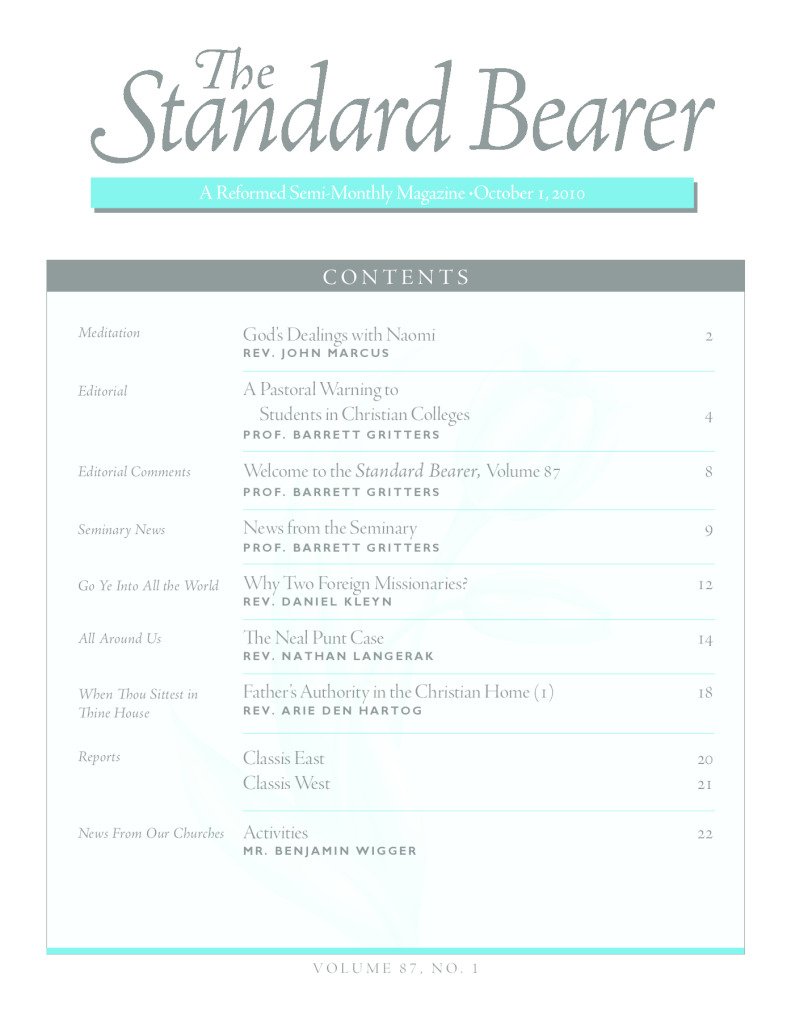