The Nature of the Office of Elder (3): Christ’s Rule Through the Body of Elders

The Nature of the Office of Elder (3): Christ’s Rule Through the Body of Elders

The Body of Elders

Not only do both terms refer to the elders as a body, but each in its own way also connotes the idea of rule. A “session” is the sitting of an organized body, to do its official work. Christ, the church’s King, holds session at the right hand of God throughout the whole New Testament—He sits there to rule. Likewise, the Presbyterian “session” refers to a church body that sits to rule. Our English word “consistory” is derived from the Latin noun consistorium, which is itself derived from the Latin verb consistere. The verb means “to stand together”; a consistorium was originally a waiting room in which people stood; from this it came to refer to the room in which a secular or imperial council met; and it has long been applied also to a church council.

The point we are making is that through this body of elders in the church, Christ rules.

Christ does not rule the church through any one man, or any elder, in isolation from the rest. Think of the consequences of supposing that each elder and minister can himself rule the church: the body of elders would become a theater for a power struggle; the church’s government would quickly degenerate into chaos; and the rule of Christ in the church would not be manifest as it should be.

Rather, Christ rules through the body of elders as they meet, deliberate matters pertaining to the spiritual welfare of the congregation, and make decisions regarding that spiritual welfare. For this reason, Article 37 of the Church Order of Dordt (1618-1619) originally read, “In every congregation there shall be a consistory consisting of ministers of the Word and elders, who shall meet at least every week….”² Many Reformed denominations, including the Protestant Reformed Churches, have revised this article to fit their own needs; but they have not omitted the fundamental requirement that the church have a ruling body.

Christ rules the church through the body of elders as it makes decisions by majority vote. From a practical viewpoint, a majority vote is necessary simply because two or more men do not always agree on all matters. More importantly, to decide matters in the consistory by majority vote is to recognize that Christ gives each elder equal authority; no one officebearer has more spiritual authority to rule than does another. Majority vote (regardless of how the vote was taken) is what led the first New Testament church council whose proceedings are recorded in Scripture to make its decision: various men spoke to the issue before James finally spoke, giving the direction that was adopted. Scripture explicitly notes that “the apostles and elders, with the whole church” were “pleased” to implement his ideas (Acts 15:22). Although Article 31 of the Church Order of Dordt specifically applies to the decisions of the major church assemblies (classis and synod), it applies to the consistory as well: “… that which is decided by majority vote shall be considered settled and binding unless it is proved to conflict with the Word of God or with” the Church Order.³

That Christ rules through majority vote of His appointed elders is not to say that Christ is pleased with every decision that elders make by majority vote. It is possible that a majority of elders, or the elders as a body, make unwise decisions. Bearing this in mind, Article 31 of the Church Order safeguards the right of an individual member of the congregation to demonstrate that the decision of the consistory conflicts with Scripture or the Church Order, by appealing to classis, then to synod.

That Christ rules through the body has implications for the individual members of the church, and for how the elders do their work in the congregation.

Ordinarily the consistories do well to delegate at least two elders to carry out any mandates that regard the spiritual lives of the people. Not only does this provide two witnesses to the consistory regarding what was done on the visit and how the visitors were received, but this also helps the congregation see that Christ rules through the body.

By this I do not suggest that any member of the congregation may refuse to meet with an elder who comes individually. Christ functions through His officebearers, as they bring His Word. Therefore, when an elder or pastor, without mandate from the consistory, meets individually with a fellow brother or sister in Christ, and brings the Word of God to bear directly on his or her trial or sin or other situation of life, Christ works through that man individually.

But if the individual member must meet with any elder who comes individually, all the more must he meet with, and submit to the judgment of, the body of elders as a whole. Through them, in faithful churches, Christ rules His people.


To have a body of elders is to have more than one elder in any congregation.4

The Church Order of Dordt, and the revision of that Church Order as officially adopted by the Protestant Reformed Churches in America, requires that there be more than one elder in any congregation. It does so, first, by consistently speaking of elders in the plural. The unmistakable implication is that every congregation must have at least two elders.

Second, because to have two elders would be to have a plurality but not a large number, and because to have two elders allows for the consistory to be deadlocked on an issue, the Church Order requires the adding of the deacons to the consistory where there are few elders. Article 38 of Dordt’s Church Order required this “where the number of elders is very small.”5 Even though the Synod said nothing more than “very small,” yet this means at least two, for the word “elders” is plural. Article 37 of the Church Order of the PRC specifies: “This [adding deacons to the consistory, DJK] shall invariably be the rule where the number [of elders, DJK] is less than three.”6

Third, the Church Order gives explicit instruction what to do if “no consistory can be constituted”—that is, if not enough elders can be found to rule a church. In such instance, this group of believers “shall be placed under the care of a neighboring consistory.” The point is that the ruling body of any congregation must consist of more than one elder; and if it consists of only two elders, the deacons must be added to the consistory.

Concluding their first missionary journey, Paul and Barnabas “ordained them elders in every church” (Acts 14:23). Paul left Titus in Crete to “ordain elders in every city” (Tit. 1:5). The apostle addressed his epistle to the Philippians “to all the saints,…with the bishops and deacons” (Phil. 1:1).

Although no Scripture passage explicitly commands every congregation to have a plurality of elders in it, passages such as these indicate that this is God’s intent. This biblical “warrant” amounts to God’s requirement for the churches of Christ in the New Testament.

This requirement of Reformed and Presbyterian churches that the ruling body consist of a plurality of elders distinguishes our form of church government from other forms.

No hierarchical system of church government, such as one finds in the Romish church, Anglicanism, and Episcopalianism, does justice to the principle of a plurality of elders. These have their “bishops,” who are in reality the overseers and rulers of the church; but these are not comprised of a plurality of men within a given congregation, ruling in that congregation. And, as is well known, the rule in Rome is ultimately by one man, the pope, who claims to be the current-day apostle and representative of Jesus Christ as King of the church.

Nor does the congregational form of church government, such as one finds in Baptist and other independent churches, do justice to this principle. Often in such churches one finds one pastor who is in effect the only elder. A plurality of deacons do assist him in his work. But the office of ruling elder, in distinction from that of teaching elder, is absent. In many of these churches, the church is as strong or weak as the pastor himself.

The Erastian form of church government, often found in the Reformed and Lutheran churches shortly after the Reformation, according to which the civil government rules all aspects of the church, does not do justice to this principle of plurality of elders, for the office of elder is nonexistent in the church.

As regards seeing the rule of Christ in His church through a plurality of men called to rule as a body, Reformed and Presbyterian churches alone have a proper form of church government.

Having a plurality of elders is beneficial for the elders themselves, as well as for the whole congregation.

Clearly, a plurality of elders lightens the workload of any individual elder.

A plurality of elders means that the men can pool their wisdom and their individual gifts, for the good of the whole.

A plurality of elders makes it more likely that various and diverse needs of the congregation will be met. One or two men either might not see certain needs, or be willing to address those needs.

The elders themselves are accountable to the body, where there is plurality. In cases where one man rules, that one man often considers himself above rule.

In addition, the members of the congregation will have more than one man to whom they can go, if need be, for spiritual support and encouragement.

But the chief benefit of plurality is that it shows to the congregation, and enables the elders themselves to keep in mind, that no one man rules the congregation. The King and Ruler of the church is Jesus Christ. He is pleased to institute an office in His church on earth, which office is filled with earthly humans, to carry out that rule. But the rule is Christ’s.

This the congregation sees better, both when a plurality of men rule, and when those men rule in the humble awareness that they are to be guided and limited in their rule by God’s Word, and when they seek God’s glory.

² Richard R. DeRidder, Translation of ECCLESIASTIAL MANUAL including the decisions of the Netherlands Synods and other significant matters relating to the government of the churches (P. Biesterveld and Dr. H. H. Kuyper, authors) (Grand Rapids, MI: Calvin Theological Seminary, 1982), page 167.

4 One could pursue the subject of the plurality of elders in more detail by reading Chapter 2, “Shared Leadership,” in Alexander Strauch’s book Biblical Eldership: An Urgent Call to Restore Biblical Church Leadership (Littleton, CO: Lewis and Roth Publishers, 1995). The entire book is recommended reading for anyone who wants to read a biblical study of the office of elder. 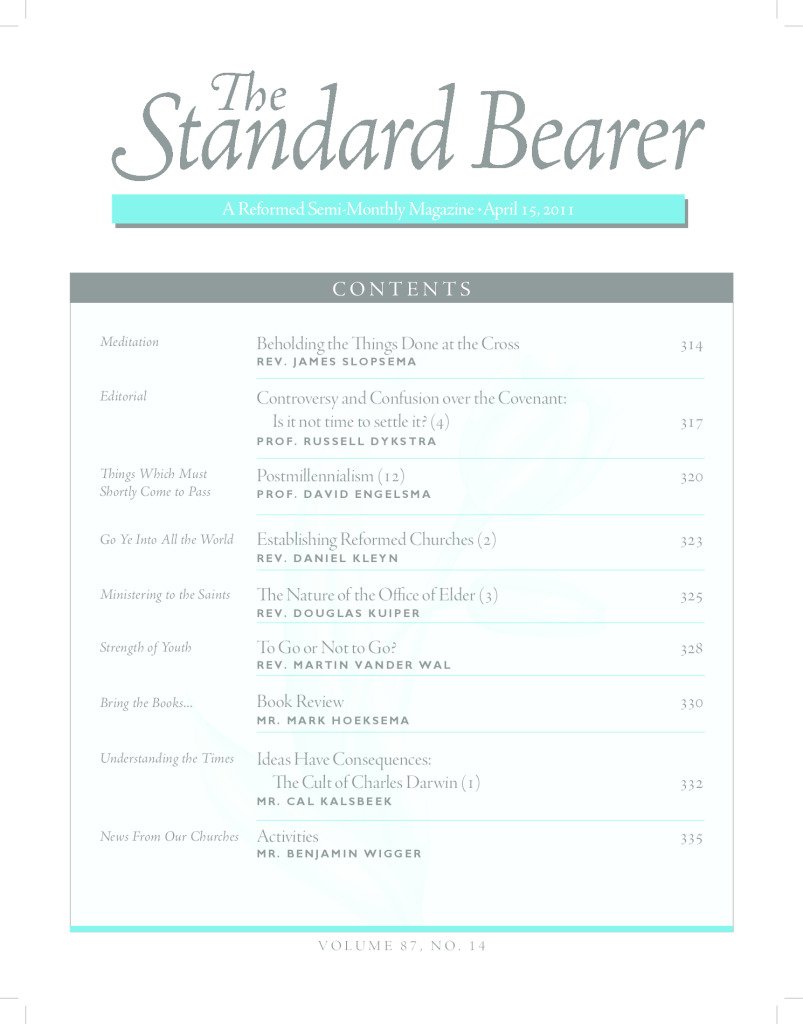