That the office of elder in the church of Jesus Christ is one of rule, Scripture indicates in two ways. The first is by the words that the Holy Spirit used to refer to this office.

The first word is “elder,” which refers to a person who is advanced in age. Actually, in the Old Testament, the English word “elder” translates three different Hebrew words. Listed in order of most common to least common usage, they mean “old one,” “great,” and “gray headed.” Clearly, all refer to one who is advanced in age. In the New Testament, the word translates the Greek word presbuteros, meaning “aged one,” from which we get our word “presbytery,” referring to the session of elders.

Strikingly, this word is used most often in Scripture, not to refer to aged people generally, but rather to the office of ruler in the church of Jesus Christ. In the Old Testament the word usually refers to those who had the rule in Israel; in the gospel accounts and in Acts, to those who were joined with the chief priests in ruling the Jews; and in the epistles, to the office of elder in the New Testament church. As instances of this latter, we read that Paul and Barnabas “ordained them elders in every church” (Acts 14:23); that the apostles and eldersgathered in Jerusalem to decide the question about circumcision (Acts 15); and that Paul called for the elders of the church at Ephesus to meet him in Miletus (Acts 20:17).

Why would the Holy Spirit use a word that literally indicates advanced age, to refer to the office of elder? To underscore that rulers in the church ought to be mature men in all respects; and maturity comes with age. Some of the gifts necessary to rule well are natural gifts, which a man might have while young; but God also uses life’s experiences and the process of sanctification to develop these gifts, in preparing a man for the office of elder. Wisdom, patience, and self-control are just some of the gifts that are developed over time. An instance of this is clearly seen in the wise counsel that the old men gave the new king Rehoboam, in contrast to the foolish counsel of the men his own age (I Kings 12:1-11).

Without placing this qualification in terms of a specific age, God does require that elders in the New Testament church be men who are mature in the faith: “not a novice” (I Tim. 3:6).

The second word, which makes even more clear that the office is one of rule, is the word translated “bishop” (Phil. 1:1; I Tim. 3:1; Titus 1:7) or “overseer” (Acts 20:28). It is the word episkopos, from which we get our word “episcopal.” While our King James Version more often translates the word “bishop” than it does “overseer,” the idea of oversight is the more literal meaning. A bishop is one to whom is entrusted the spiritual oversight of others.

Once in Scripture, these two words are used in the same context to indicate that they refer to the same office. To the elders at Ephesus, Paul said, “the Holy Ghost hath made you overseers” (Acts 20:28).

The second way in which Scripture indicates the office of elder to be one of rule is by explicit teaching in several New Testament passages.

One such is Acts 20:28: “Take heed therefore unto yourselves, and to all the flock, over the which the Holy Ghost hath made you overseers, to feed the church of God, which he hath purchased with his own blood.” To take heed, to oversee, and to feed, all involve rule.

In his first epistle to Timothy, the inspired apostle makes plain that the office of elder is one of rule. A qualification for the office is that the bishop rule well his own house, “For if a man know not how to rule his own house, how shall he take care of the church of God?” (I Tim. 3:5). And I Timothy 5:17: “Let the elders that rule well be counted worthy of double honor….”

Indications from the Reformed confessions

Our Reformed confessions support the thesis that the nature of the office of elder in Christ’s church is one of rule.

The Belgic Confession, Article 30, indicates that the work of the elders is to punish and restrain transgressors by spiritual means. This work of judgment is an aspect of rule.

Two articles of our Church Order indicate this as well. Article 16, speaking particularly of the office of minister, indicates that it is his duty, “with the elders, to exercise church discipline and see to it that everything is done decently and in good order.” This article specifies that the rule involves oversight and administering discipline. And Article 23 reads:

The office of elders, in addition to what was said in Article 16 to be their duty in common with the minister of the Word, is to take heed that the ministers, together with their fellow-elders and the deacons, faithfully discharge their office, and both before and after the Lord’s Supper, as time and circumstances may demand, for the edification of the churches, to visit the families of the congregation, in order particularly to comfort and instruct the members, and also to exhort others in respect to the Christian religion.

This article indicates that the elders have the rule over fellow officebearers, and broadens the idea of rule to include comfort and instruction.

Finally, the Form for Ordination of Elders and Deacons indicates this to be the nature of the office of elder. After having observed that the word is applied to two offices in the church—that of pastor and elder—the Form speaks particularly of the latter:

…the others, who did not labor in the Word, and still did serve in the church, bore a particular office, namely, they had the oversight of the church and ruled the same with the ministers of the Word. For Paul

…speaketh… particularly of this office, saying, He that ruleth, let him do it with diligence; likewise, in another place he counts government among the gifts and offices which God hath instituted in the church

I Cor. 12 ….Then, in setting forth the duties of the office of elder, the Form mentions that elders are

to take the oversight of the church which is committed to them, and diligently to look whether every one properly deports himself in his confession and conversation; to admonish those who behave themselves disorderly, and to prevent, as much as possible, the sacraments from being profaned; also to act (according to the Christian discipline) against the impenitent, and to receive the penitent again into the bosom of the church….

The church’s need for such rule

The church of Jesus Christ needs this rule; she needs the office of elder in her midst.

Proof enough that she needs this office and rule is the fact that Christ Himself placed the office in the church, and prescribed its basic function. Christ gives His church nothing that she does not need.

Reformed churches recognize the need for this rule by insisting that the office of elder be present in every congregation. Reformed churches further insist that every group of believers who, for whatever reason, desire to gather for worship and fellowship but cannot have their own elders, be placed under the care of the elders of another church. This is Article 39 of our Church Order: “Places where as yet no consistory can be constituted shall be placed under the care of a neighboring consistory.” When the consistories of existing churches become too small to function as a consistory (when there is only one elder able to serve), or when we designate a group of believers to be the object of our mission work, we implement this article.

With this need for office, some might take exception. Are not these sinners saints? Does not God work in each by His Holy Spirit?

This was essentially the argument of Korah, Dathan, and Abiram, who said to Moses and Aaron: “Ye take too much upon you, seeing all the congregation are holy, every one of them, and the Lord is among them: wherefore then lift ye up yourselves above the congregation of the Lord?” Jehovah answered their objection decisively, reminding us that in the day of judgment He will destroy those who despised His officebearers.

For any who ask why the office of elder is necessary, not because they despise the office but because they truly desire to be instructed, the answer is this: while God works in each by His Spirit, and sanctifies His elect, all Christians still stand in need of government. Not every member of the church on earth is sanctified; in the church is a carnal element. Not every sanctified member of the church always lives as though he is sanctified; some give themselves over for a time to a life of sin. And even godly believers find that the work of the elders is a gracious means of God to help us battle against sin in our hearts.

Why, specifically, does the church need elders? Following are some scriptural reasons.

The church needs elders to promote decency and order. The apostle’s admonition “Let all things be done decently and in order” (I Cor. 14:40) requires not only willing believers, but also godly elders, to implement.

For this reason, government is necessary—whether in the church, home, or civil sphere. Government in the church is a creation ordinance, instituted already in the state of righteousness: Adam was created to be the head of Eve in things spiritual, as well as earthly.

Sin makes the need for such government all the more urgent. Sinners do not seek decency and order; by nature we seek ourselves, and are willing to violate God’s law if that serves our own advantage. Decency and order, in the way of following God’s law, the elders enforce in the church.

The church needs elders to guard her from her enemies. Within and without, the church battles against the forces of sin. So the apostle Paul exhorted the elders of Ephesus to diligence in taking heed to themselves and to the flock, because grievous wolves would enter in; even some who were elders would divide the congregation by their perverse words (Acts 20:28-29). Godly elders take the lead in this battle.

The church needs elders to administer the law and rule of God. The work of the elders is not primarily to make laws—God has made the laws; rather, the work of the elders is to administer those laws—to see that they are being kept in the congregation. Such was the duty not only of the king in the Old Testament, but also of the many judges whom the kings appointed. So also the writer to the Hebrews exhorts them to “Obey them that have the rule over you, and submit yourselves; for they watch for your souls, as they that must give account…” (Heb. 13:17).

Finally, the church needs elders to show her that Jesus Christ does, by His Spirit and Word, rule in His church. For these elders rule in the authority of Christ; and administer the rule of Christ Himself.

Let us thank God for the presence of this office in our midst! 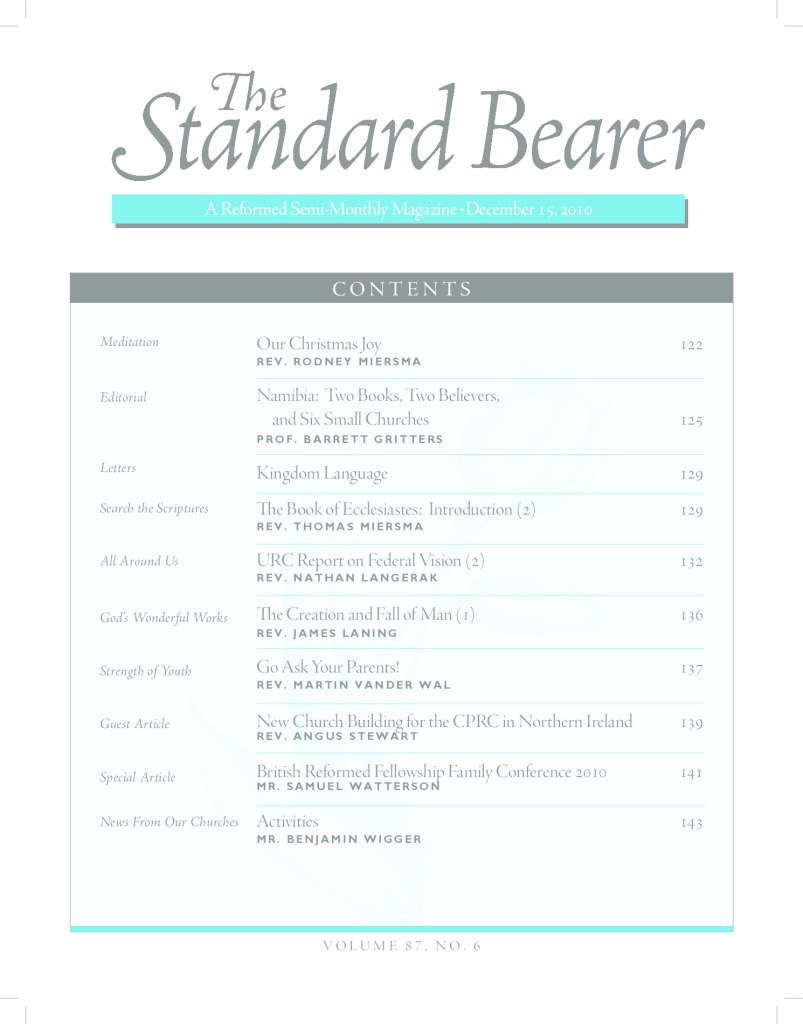