The Mode of Baptism Established

The Mode of Baptism Established

Previously three articles appeared dealing generally, and for the most part, with the mode of baptism. The first, Various Baptisms, appeared in TSB, Vol. 47, No. 1l;Mar. 1, 1971, p. 261; the second followed in Various Baptisms Exemplifying One Baptism, Vol. 47, No. 20, Sept. 1, 1971, p. 477; and the third was The Mode of the One Baptism, Vol. 48, No. 8, Jan. 15, 1972, p. 181. The first proved there were many baptisms in the Old Testament, and all, every one of them, were by sprinkling and pouring. None were by immersion. It was also shown that the word dip as related tosprinkle, is never, in that connection, “dip or sprinkle,” but “dip and sprinkle.” Ten instances of this action show that the dipping was not the baptism, but was instrumental to baptizing by sprinkling. Whatever dipping there was, it did not happen to the baptized. The second article showed that always in all dispensations of God’s covenant believing parentsand their elect infant seed were included in it. The prophets continually proclaimed the baptism of the Spirit in the promise that God would pour out His Spirit upon all flesh, including nursing infants. The New Testament doctrine of baptism, we saw, proves to be in harmony with all this, sharply distinguishing between immersion and baptism. The third in the series entered upon the eleven recorded cases of baptism in the New Testament, in which it was shown that sound exegesis reveals neither immersion nor the idea the subjects were even in the water. As to our intended aim in these articles, it is expressed now in the title wordEstablished, using it in the sense of “put beyond doubt.”

Continuing with the recorded cases of baptism in the New Testament, we look at that of Paul’s baptism. InActs 9:18 we read, “And immediately there fell from his eyes as it had been scales, and he received sight forthwith, and arose and was baptized. And when he had received meat, he was strengthened.” This is interesting. For the brief, concise account has no hint of Paul making a change of clothes, no mention of going out anywhere, no going down or coming up, no mention of Abana or Pharpar, nothing of what one German scholar imagined, a Badezimmer, or aVollbad. His rising up, John Gill thought, had to be in order to go out and be immersed, for it was not necessary to arise to be baptized by sprinkling or pouring. But Paul was commanded to arise with a view to being baptized, and to “wash away thy sins” (Acts 22:16). The King James text is plain enough. However, the original in the commonly received text reveals nicely and at a glance the grammatical structure: “And immediately such as scales fell off from his eyes. He recovered sight on the spot! And having risen, was baptized; and having taken food was strengthened.” The two participles in the last statement describe not an act preparatory to baptism, such as going out to a river, but how, in what manner, he was baptized, and how strengthened. (Cp. how “He emptied himself,” Phil. 2:7: “taking the form of a servant.”) The meaning is, “having risen and still standing, he was baptized, and having taken food and still partaking, he was strengthened.” Just as he was strengthened while and right where he had been eating, so he was baptized right where he rose up (Acts 5:17) and stood. There is nothing in the text like “having risen” he was taken I out to the Abana and immersed. That would be eisegesis, not exegesis.

Then there is the case of the baptism of Cornelius (Acts 10:44-48; Acts 11:15-17). The question we raise here is, Does this case throw any light on the matter of mode? Let us see, noting the added emphasis. “While Peter yet spoke these words, the Holy Spirit fell on all them who heard the word. And they of the circumcision who believed were astonished, as many as came with Peter, because on the Gentiles also was poured outthe gift of the Holy Spirit . . . Then answered Peter, ‘Can any man forbid water, that these should not bebaptized, who have received the Holy Spirit as well as we?’ And he commanded them to be baptized in the name of the Lord . ‘. . . And as I began to speak, the Holy Spirit fell on them, as on us at the beginning. Then remembered I the word of the Lord, how he said, ‘John indeed baptized with water; but ye shall be baptized with the Holy Spirit.” ” After reading this; isn’t it rather natural, and not at all surprising, to feel and agree that the passage indeed does seem to throw light on the question of mode? After all, what was it which suggested to Peter that these Gentiles ought to be baptized? Why, it was simply the fact that they, too, had received the Holy Spirit. Then what was themanner of their receiving the Spirit? He fell on them and was poured out on them. When Peter saw the pouring out and the falling on them of the Spirit, he saw that the baptism with the Holy Spirit was the real baptism (of which water baptism is the sign), and it was accomplished by pouring! This pouring out of the Spirit on the people suggested to Peter’s mind John’s baptism. Remarkable! Would that pouring out of the Spirit suggest to the mind of an immersionist John’s baptism? How did John baptize? and how were these baptized, after Peter commanded it to be done? Could it have been in any other manner but in harmony with the outpouring and falling on them of the Spirit?

The remaining cases are of household baptisms, except for one, which was of some disciples of John Baptist. Of the Philippian jailer it is said that he “was baptized, he and all his, straightway.” The last word there means forthwith (as in chap. 9), or on the spot, immediately, instantly! Not somewhere outside the prison, but right there where he was, the jailer was baptized on the spot. Scripture plainly teaches the unity of the mode and action of baptism. What is true in this connection of the baptism with the Holy Spirit must also be true of baptism with water. In Scripture you do not find different modes of baptism. How could there be baptism with the Holy Spirit by one mode and baptism with water by another mode? The baptism with the Holy Spirit was by the shedding forth, i.e., the pouring out or falling on of the Spirit. Nothing is more positively clear in Scripture than that baptism signifies the washing away of our sins by the sprinkling of the blood of Christ and the pouring out of His Spirit. It signifies the cleansing of the soul from sin by the blood of Christ, and regeneration of the heart by the Holy Spirit. 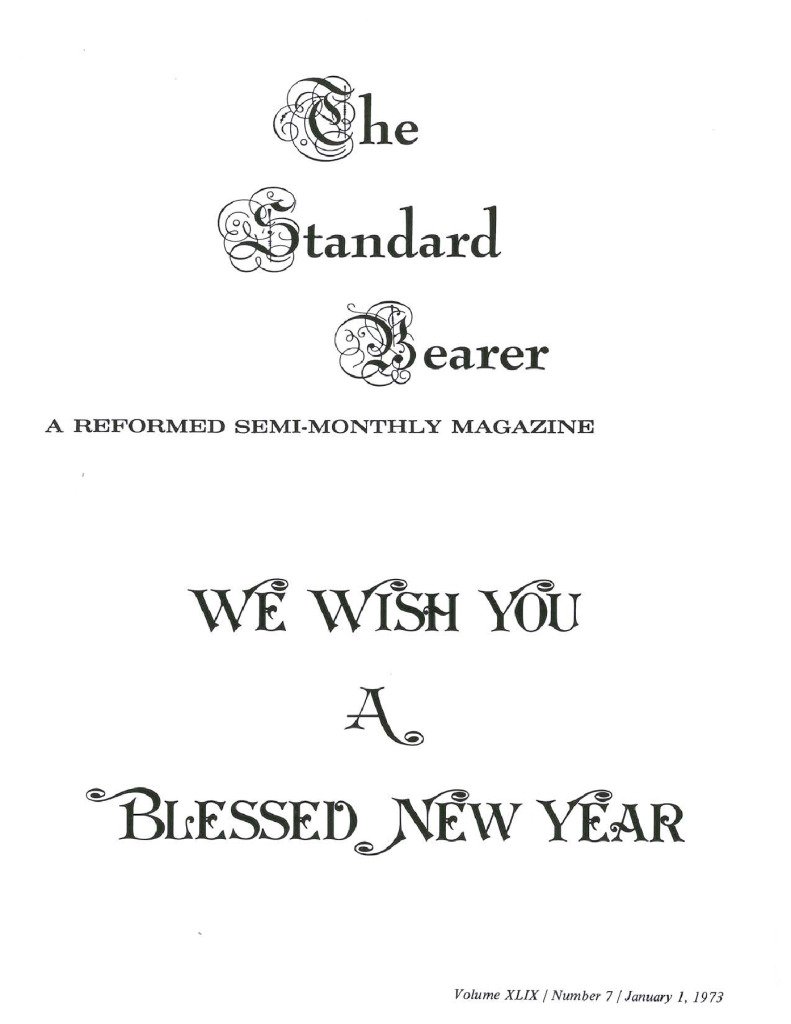