In our last installment, we learned that Article 51 of the Church Order deals with the subject of missions as regulated by a synodical mission order. More particularly, therefore, with denominational mission work although not altogether excluding the endeavors of the individual churches. We observed that mission work by our churches is conducted through our Mission Board that is responsible to our Synod and that works cooperatively with the consistory of the calling church we also noted that our Mission Board is not empowered to call a missionary since that is the sole prerogative of the church as institute. This practice, although not always agreed upon, has been followed by our churches from the beginning of our existence. Concerning the history of this question tie shall write presently but first we must inject a parenthetical thought.

(It is somewhat of a temptation to digress for a little while from matters that concern our Church Order directly and devote the space of this rubric to a series of articles on the principles, methods and practices of missions and other related questions. Three main reasons motivate this desire. First of all, we believe this would be of interest and benefit to our people. Secondly, we feel there is a definite need for this and especially so because of the multifarious misconceptions regarding missions that are currently being propagated in many religious periodicals. A voice that will witness of the truth concerning the calling of the church in this regard is both desired and needed. Finally, we have very little in our Standard Bearer with regard to this subject. Having just recently compiled the index for the last volume of our magazine, I find the articles referring to missions to be very scarce. May we then suggest at least that since this material is really foreign to our Church Order rubric, our missionary might perhaps devote himself to this task and in so doing this could nicely be combined with periodic reports of our current mission activity.)

To return to the question whether it is proper for a synod or classis to call and send out a missionary, we learn that this matter was considered already as early as 1896 by the Synod of Middelburg. From a series of articles written in The Banner a number of years ago by J.D. De Korne, we are informed that the Synod of Middelburg defined foreign mission principles but that it was in 1902 at the Synod of Amhem that these principles were embodied in a mission order. We quote here the following six principles of that mission order:

“1. The purpose of all missionary effort is the glorification of God.” Rev. De Korne adds that, “This is fundamental. Since it was not disputed it is seldom mentioned in later discussions.”

“2. Who must send? According to Matthew 28:19 and Acts 13:1ff., missions ii the task of the church, not of the church as denomination, but of the local congregation, although in the working out of missionary activity denominational ties must be recognized.

“3. Who must go? Only officebearers of the church can be sent as missionaries. Auxiliary services can be rendered by those who do not hold office in the church, but in the exercise of all official functions only the ordained missionary can officiate.

“4. To whom must missionaries be sent? To all creatures, but the colonial possessions of the Netherlands are the special responsibility of this country.

“5. How must missions be done? Force is excluded. We must convince men of the truth, bring them to faith, and those who reveal themselves as believers must be gathered in churches. There is such a thing as preparatory grace. Since the Christian religion is bound to the Holy Scriptures, teaching men to read is one of the appointed means of preparation. Medical help is also preparatory. But remember that this preparation and these auxiliary methods are not missions. Schools and hospitals do not flow forth fro& the offices of the church, and these preparatory and auxiliary means may not be identified with the work of church officers. There is a warning against failing to distinguish between the essence of Christianity and the western form of civilization; rendering all services free; and against persisting in missionary endeavor in places where no one comes to confession of faith.” This section contains a number of other valuable hints from which our church can profit in its further study of missionary methods.

“6. Missionary Relationships. It is declared that the church which carries on mission work has necessary relationships with the government, with other churches, with other mission stations, and with churches of sound confession in the land where the work is done.”

We do not aim to evaluate these principles nor are we concerned with their validity. At present we are interested only in the second of these principles which deals with the matter of sending out the missionary and involves related questions, such as, his call, field of labor, directives pertaining to his work, etc. In discussing this question in his articles, Reb. De Korne distinguishes between what he calls “centralization” versus “decentralization.” The former he then defines as “the theory of missionary activity which stresses the control and supervision of mission work by the synod and agencies appointed by the synod” while decentralization refers to the “theory of missionary activity which places all emphasis on the autonomy and the authority of the local congregation.” Apart from our dislike of the use of the term “decentralization,” this distinction is perhaps workable to at least make plain the issue that is involved here. We would prefer to speak of two theories of mission activity that emphasize the centralization of authority on two different levels. The one stresses the local consistory and the other the broader gatherings of the churches. Although it is true that no one pleads for the extreme feature of either view which would men that mission activity would be completely controlled by either the consistory or the synod, our churches in both theory and practice have favored the “decentralization” view which was also the original position taken by the Synod of Middelburg in 1896.

In the Netherlands, the Synod of Arnhem in 1902 drew up an expression adopting in effect the decentralization position in that it insisted that calling churches, not classes or synod, are the official bodies which send out missionaries. The position of this synod was that calling churches pay not only the salaries of their missionaries but all expenses of the mission post. The same synod, however, made certain concessions to the position of centralization in that it required that synod determine the field, assign posts to the calling churches, determine the requirements of the men who can be called, and required that two synodical deputies for missions must be present at their examination. Synodical deputies also have a voice in determining the qualifications of native workers on the mission field, control the training schools on the field, have authority to subsidize medical a work at the posts of individual calling churches, and determine which liturgical documents and Bible translations shall be used. Prof. J.H. Bavinck says that this mission order of 1902 has remained the fundamental position of the Reformed Churches of the Netherlands on missions. There have been some changes but none of them is major.

From the same articles referred to above, we learn that this question has also had a stormy history in the Reformed churches of our country, particularly our mother church. In 1898 the first Mission Order was adopted. It expressed in Article 1 that, “In the execution of her decisions regarding heathen missions, synod makes use of a Board for heathen missions. The Board is subject to synod.” Article 28 states that, “Discipline over doctrine and life of missionaries and missionary helpers must be exercised by the consistory to which they belong.” Article 32 provides that, “When a minister is needed for mission service the Board shall request a classis to call and send out that person, but the further regulation of his work and his financial support was to be left entirely to the Board.” Thus 1896 leaned toward the principle of centralization. In 1902 a further step was taken and the Board was authorized to ordain missionaries.

In 1906 these principles were challenged. Two Classes (Classis Iowa and Classis Hudson) proposed that missionaries should not be sent out by committees, but by consistories, classes, or synod. The synod appointed a committee to draw up a Mission Order based on Biblical principles. The report of this committee was submitted two years later and gave rise to a spirited discussion of the question whether missionaries can be called only by local consistories or whether they can be called also by groups of consistories, by classes, or by synod. The synod then took the position that, “Since the broader judicatories of our churches as they meet in classis and synod, form a legal representation of these churches, it follows that not only may separate consistories meeting separately call a minister of the Word and install him in office, but that also each classis and synod in combined session may issue calls in cases where a minister of the Word is needed in general service.”

This decision of the synod aroused a vigorous protest on the following grounds:

“a. The decision leads to the introduction of general offices which the Scriptures do not recognize after the offices of apostles and evangelists were discontinued.

“b. In calls to such offices the officebearers will have to separate themselves from the congregation with which the primordial right to extend calls rests, as is evident from Acts 1:23, 6:2-6, 13:1-3, II Corinthians 8:19, and from. Article XXXI of the Netherlands Confession of Faith, Article IV and V of the Church Order of Dordt, and from the formula for the installation of officebearers.

“c. The Church Order does not recognize such general offices, makes no provision for the ecclesiastical position of officebearers as called, with the result that these, although they are ministers of the Word, cannot by virtue of their office be members of any consistory.

“d. Because this decision inevitably leads us into the arms of collegialism which threatens us from every side.”

In spite of this, synod decided to have a committee draw up a Mission Order consistent with the principle adopted. And this decision aroused still more controversy over the question. 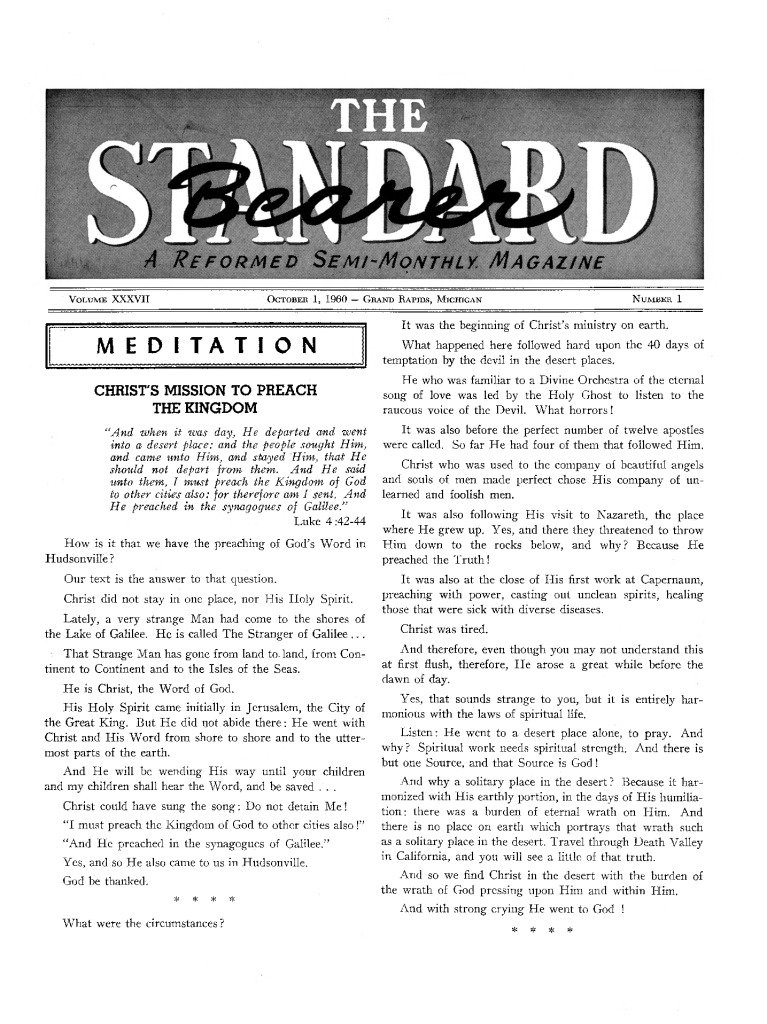