The Mission of the Church

The Mission of the Church

It has become fashionable in our day to speak critically of the Church as an Institution of Christ. There is place for criticism. The instituted Church is not above criticism. But that criticism must be honest, Biblically based, motivated by love for the Church of Jesus Christ, and therefore CONSTRUCTIVE! We have no patience for those whose purpose is to tear down and destroy. We have no patience for those who simply rebel against the plain Biblical directives for the Church and clamor for change for the sake of change. We do recognize, however, that some of the criticism is warranted and legitimate. When our young people, for example, point to the lack of zeal which so often characterizes us we ought to listen, painful as it may be. When they point to some of the inconsistencies evident among their parents, we had better not dismiss them lightly and say: “O well, they’re young.” At the same time, however, much of the criticism leveled at the church today is unwarranted. It is not constructive, but destructive.

It is being said that the Church, with its fine buildings, its worship services, societies, catechism classes, and other functions is just not “with it.” This criticism is most severely leveled at our own Protestant Reformed Churches. We are considered by outsiders, as we are wont to speak of those who are not members of our churches, as “old fashioned,” much too conservative, negative, loveless, too much concerned with doctrine, etc. Perhaps you have heard some of this. Perhaps this type of thing has raised questions in your own soul about the mission of the church. Maybe you are beginning to wonder why your Protestant Reformed pastor preaches expository sermons every Sunday, which often last close to an hour. Perhaps you even chafe a bit under it all! Isn’t there more to it than two church services a Sunday, consisting mainly of two rather lengthy sermons? Does Christianity consist in catechism classes which I must attend, young people’s societies, and the dreaded annual family visiting? And, must the church be so terribly touchy about doctrine? There is a heavy emphasis on the doctrine of the Scriptures as stated in our confessions; the Heidelberg Catechism, Canons, and Belgic Confession of faith. Does there have to be? And, to get back to sermons, why does the preacher always emphasize our failures, shortcomings, and sins? Maybe these are representative of the questions you have.

It is always dangerous and difficult to generalize. The danger lies in oversimplifying and the difficulty in defining the issue fairly. The current criticism of the Church is this: The Church is not being faithful to its mission, which is to create a better world; a world of peace, love, justice, and happiness for all people. The world is full of racism and the church does nothing about it! One by one congregations will sell their property, move out of the inner city black ghettos, relocate in the comfortable suburbs and proceed to spend thousands of dollars for elaborate facilities. Meanwhile the ghettos continue to burn with hatred and sometimes with fire. Crime increases, frustrations deepen, but the Church is gone and does nothing about it. Instead the Church even encourages segregation by isolating herself in the suburb. The Church on this score, it is said, fails in its mission to bring about racial peace through integration. And not only does the church fail: it only solidifies itself the more against the blacks. This is one example.

Another is the pollution problem. When is the last time, the critic will ask, you heard a sermon on this? What is the church doing about the destruction off our lakes, streams, rivers, forests; or about the smog we are forced to breathe? Again the church says nothing and does nothing.

More and more it is being said that the Vietnam war is unjust. (The writer happens to agree.) Has your pastor ever preached a sermon on the atrocity of Viet Nam? Once more the Church is silent! The world is an armed camp. Nation stands over against nation, race against race; there is war and rumor of war, but the church never addresses itself to the problem. Instead it warns its members about Arminianism. Or it is at great pains to maintain an infallibly inspired, and, therefore, inerrant Bible.

So we could go on. Cities are dying, people are starving, nations are warring, youth is rebelling, the economy is unstable, crime is increasing, prisoners are rioting and the church is still preaching sin and grace and gratitude following the outline of a 16th century creed! The Church fails in its mission!

Such talk ought to make every Bible-believing, Reformed Christian very angry! That criticism rises out of a rejection of the true mission of the Church of Jesus Christ as instituted in the world. The mission of the Church according to the Bible is simply this: “Preach the Word!” That’s all, preach the Word. This is all Christ ever told His Church to do! Preach and baptize in all the world! (Matt. 28:19, 20) This was the inspired Apostle Paul’s charge to his spiritual s Timothy according to II Timothy 4:2. This is the teaching of Ephesians 4, I Corinthians 1, and indeed the whole Bible.

Along with the rejection of that Biblical teaching on the mission of the church goes the erroneous notion of the relation between the Church and the world. All the criticism against the church comes out of the idea that the church exists FOR the world! That is exactly not the way it is! The Church does not exist for the world; but the world exists for the church! Take your Bible and look up the first chapter of Colossians and meditate prayerfully on verses 12 through 20. There the Bible teaches that by Christ and for Christ all things were created. All things, notice, things in heaven and in earth, visible and invisible, thrones, dominions, principalities, and powers are by Christ and for Christ. And Christ is the head of the body, the church. That simply means then that all things were created for the Church! We find the same precious truth in the forty-third and forty-fifth chapters of the prophecy of Isaiah.

And what a wonderful truth that is! The counsel of God to glorify Himself by saving a church in Jesus Christ to be realized in the glory of the new heaven and earth is being realized NOW in time and history. Over against that Church of God there develops the Kingdom of this world, which under the rule of the devil opposes the Church and attempts to destroy the cause of Christ. With temptation, scorn, false prophets and teachers, the fire of persecution, the devil and the world of sin make war on the church. But in all their raging fury they are only imagining vain things and God holds them in derision; He laughs! (Psalm 2) Christ has the victory. His cross is the redemption of His Church and the destruction of His enemies. His blessed resurrection seals it! Sitting at the right hand of God He rules all things so that they must in spite of themselves serve the salvation of His Body, the Church. Indeed, the church sings with the Apostle Paul: “Who shall separate us from the love of God? . . . in all these things we are more than conquerors through him that loved us (cf. Romans 8).

All things therefore are for us and nothing can be against us as members of the body of Jesus Christ. When the Church, therefore, preaches Christ crucified it is faithful to its mission. When the Church calls its members to seek the Kingdom of Heaven as strangers in the earth who are born again to a living hope, it is faithful to its mission. The Church is obedient to Christ when it holds before its members the calling to live antithetically. When it calls its members to fight the good fight, to put off the old man of sin, and to put on the new man in Christ, to love not the world neither the things that are in the world, to strive for the Kingdom of Heaven by making their calling and election sure, etc. then the church is faithful to its calling.

Then the Church does not superficially deal with symptoms such as racism, poverty, murder, and crime and all the rest; but it deals with the REAL ISSUE, which is SIN against the most high majesty of God! And thus the Church comforts its members with the Gospel of salvation by grace through faith, the gift of God. God’s people are turned heaven-ward where is their citizenship and whence they expect their Savior, Who shall change their vile bodies into glorious bodies!

That makes us as covenant young people radically’ different! We have a heavenly goal, a heavenly set of values, a heavenly life, and on earth we are, as father Abraham, sojourners in a strange and alien land!

Let us pray, then, that the Church, our churches, remain faithful to the mission of the Church, in order that we her members may by the power of the risen Christ seek those things which are above, where Christ is, and not set our affection on things below! Then we will not foolishly look for an earthly kingdom, but keeping ourselves unspotted from the world, being clothed with the armor of light, we will awake out of our sleep and look for the coming Savior and His Kingdom! 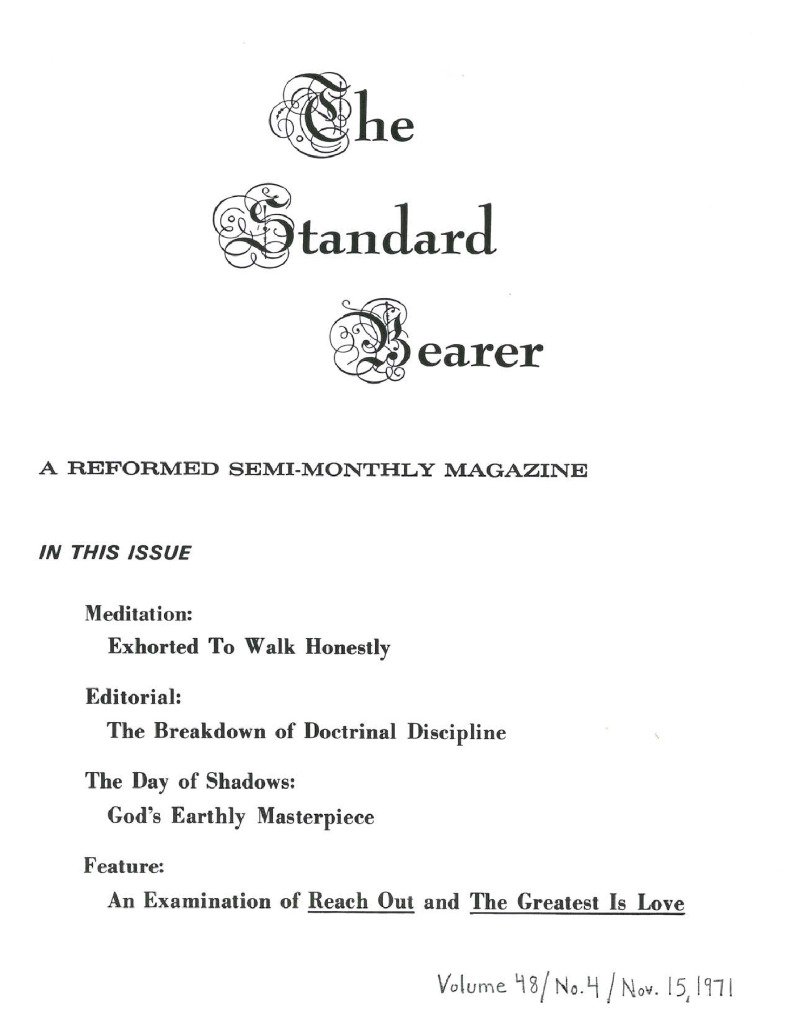