The Mission Fields in Limerick and South Wales

The Mission Fields in Limerick and South Wales

The Covenant Protestant Reformed Church in Northern Ireland (CPRC) supports a mission field in Limerick, Ireland. Readers of the Standard Bearer should be aware that Ballymena, the home of the CPRC, and Limerick, the home of the Limerick Reformed Fellowship (LRF) are in different jurisdictions. The island of Ireland, known by many as the Emerald Isle, is divided into Northern Ireland and the Republic of Ireland. The two countries are very similar in nature—similar people, similar climate, similar customs. The one major difference—apart from political affiliations—is religious. The vast majority of people in the Republic of Ireland (population c. 4.6 million) are Roman Catholic. Of course, a large number are nominal Roman Catholics—they rarely attend Mass, but they do seek baptism for their children and a priest for their funerals. The population of Northern Ireland is about 60%-40% split of Protestant-Catholic (population c. 1.8 million). Of course, many Protestants and Catholics are nominal also, although there is a sizeable evangelical presence, much larger than in the Republic of Ireland, where evangelicalism is minimal. Of the very small number of evangelicals in Ireland, most are Arminian, Baptist, Pentecostal, Dispensationalist, and Independent. To reform such a population is very difficult. The Reformed faith demands a complete change in Soteriology (doctrine of salvation), Ecclesiology (doctrine and practice of the church), and Eschatology (doctrine of the last things)! Few are willing to make the necessary sacrifices.

For many years Rev. Angus Stewart (and before him Rev. Ron Hanko, presently pastor in Lynden, WA, USA) has produced a monthly Covenant Reformed News. This made its way to a pastor in Wales, who was a friend of Bill Davies, originally from Wales but living in Limerick, Ireland (population c. 105,000). It was through the CR News that Bill Davies (now aged 82) came into contact with the CPRC and Rev. Stewart. Unhappy with the preaching and teaching in the evangelical churches in Limerick, Bill requested copies of the sermons preached in Ballymena. Bill was also able to get the CR News and copies of sermons into the hands of other men in Limerick. Slowly, a very small group of people was formed, who were hungry for the truth of God’s Word.

In 2004, Prof. Herman Hanko, who was vacationing in Ireland at the time, visited this group and gave them a lecture on “What Is a Reformed Church?” Prof. Hanko urged Rev. Stewart and the CPRC to investigate Limerick as a possible field, whereupon Rev. Stewart gave his first Limerick Lecture on “Predestination: What Does the Bible Say?” on September 28, 2004. There were, as you might imagine, mixed reactions to that topic. Rev. Stewart recalls a very lively Q&A time after the speech—some people were very angry; others were more interested.

Between September 2004 and June 2010, Rev. Stewart (and, occasionally, visiting pastors from the PRCA) delivered over forty lectures. Gradually, a small group began to form in Limerick, calling themselves the Limerick Reformed Fellowship. They began meeting in members’ homes to listen to recorded messages from the CPRC. As the group developed, they began to hold worship services in a public hall—Conradh na Gaelige, an Irish-language school situated in Limerick city center—and to develop a website.

During this time (September 2006-June 2010), I, Martyn McGeown, a native of Northern Ireland, was in the PRC seminary. It became clear to the CPRC Council that the LR Fellowship was ready for their own missionary. In June 2010, I received and accepted the call to labor in Limerick and on July 31, 2010 I was ordained. My inaugural sermon, “Desire the Word!” (I Pet. 2:2) was preached on August 1, 2010. Since that time the LR Fellowship has been holding two worship services every Lord’s Day (11 a.m. and 5.30 p.m.), as well as conducting catechism classes, Bible studies, doctrinal classes, and public lectures.

Since August 2010, the LR Fellowship has seen two weddings and six baptisms. Bill Davies, our oldest member and founder is still with us. We have an average attendance of between 15-20 souls every Lord’s Day. Many are young families, a small and enthusiastic group of Reformed saints. In our short time, we have seen members come and go; we have seen the twofold effect of the Word—some are edified by the preaching; others are repelled by it.

Our greatest challenge is to make and keep new contacts. This is a common problem on the mission field—the core group is often small and keen for growth, but gaining new members is difficult. The members are busy with work and family, and it is hard to find the time for “extra projects” such as evangelism efforts. In addition, Ireland is hard to reach. Superstition, ignorance, and disinterest are formidable obstacles. Yet we know that Christ will gather His church using weakest means to fulfil His will. We covet the prayers of our brethren.

It may interest the readers of the SB to know that the University of Limerick offers study-abroad programs, where students can take courses in Ireland. In the past, members of Trinity PRC and Covenant ERCS have worshipped with us in Limerick while participating in such a program, and presently a member of Zion PRC is studying here. We invite others to follow in their footsteps.

Across the Irish sea is Wales, part of Great Britain, with a population of some 3 million. Rev. Ronald Hanko was PRCA missionary in Ballymena from March 1993. During his time there, he lectured and preached regularly in Wales, especially in a small coastal town called Porthcawl, finishing his ministry there in 2000. After a gap of some years, Prof. H. Hanko brought the Word there in December 2003 on “The Sovereignty of God and the Signs of the Times.” Rev. Stewart first lectured there in February 2004 on “The Glory of God,” and has been faithfully travelling there ever since. I gave my first lecture there on February 24, 2011. Rev. Stewart and I travel to Wales every other month or so. The current venue is Port Talbot, after our former venue in Porthcawl, an old people’s rest home called “The Rest,” closed a few years ago.

The work in Wales is more difficult than the work in Limerick. The core group is smaller—and dwindling due to the age and the infirmity of many of the saints. Brian Harris, Richard Holt, and David and Chris Hutchings make up the core group at present. The group is also more scattered over a wider area. One man drives a considerable distance after milking his cows to come to the lectures. The Word is, however, gladly received by the few who come, and they purchase many books and CDs/DVDs. Wales is spiritually dead—it was a land of “revivals,” but today few Welsh people attend any kind of public worship. In the last census, Wales had the highest percentage of people reporting that they had “no religion.”

Brethren, pray for us—for our mission fields in Limerick and Wales, and that the Lord might open up other fruitful mission fields, and that He might provide laborers in His vineyard. Let us not despise the day of small things, but let us labor while it is still day, for the night comes when no man can labor. 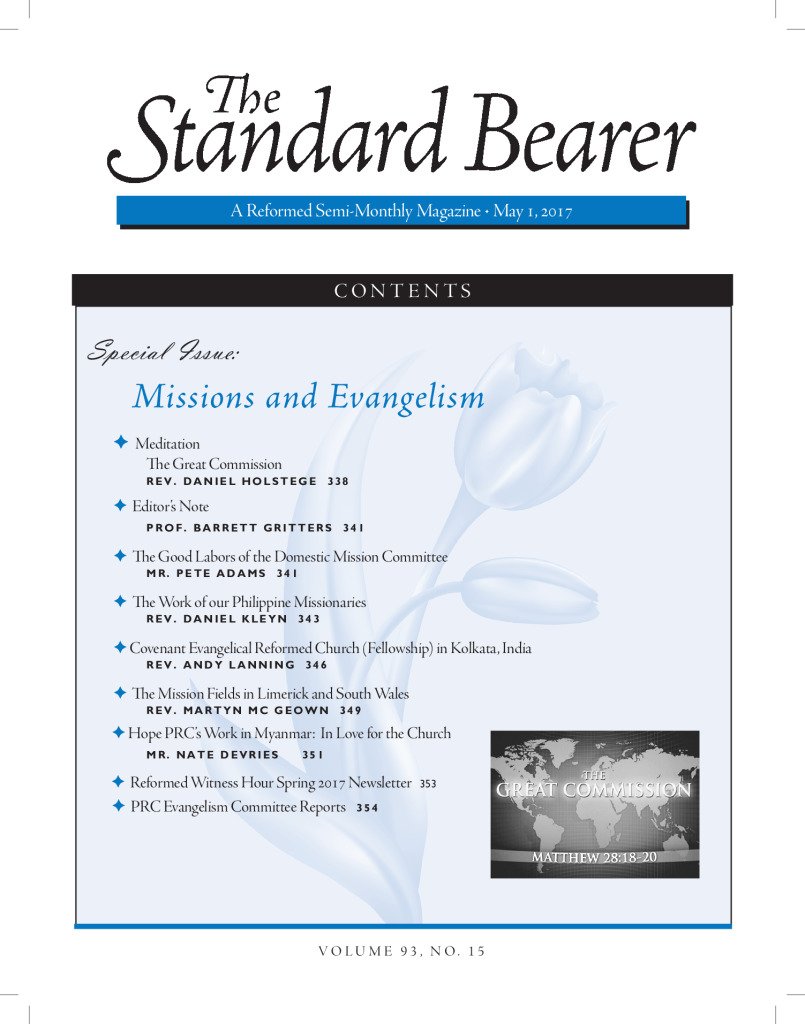