The Ministry of the Word (continued): As Overseer

We have observed that the calling of the minister is to bring the word of God in different ways and under various circumstances. Among these is his task to bring the word in a disciplinary manner unto those that walk in sin. In general this is also done through the ministry of the Word in the public assembly of the people of God on the Lord’s Day where the minister must “say unto the righteous that it shall be well with him, for he shall eat of the fruit of his doings and woe unto the wicked! it shall be ill with him for the reward of his hands shall be given him”, (Is. 3:10, 11) but we speak now of the specific application of the word to individual circumstances that require admonition and discipline. Frequently, in cases where this is necessary, the preaching of the word on the Sabbath no longer reaches those that are the objects of this special ministerial labor. The pastor must apply the key power of Christian discipline which is a special form of the ministry of the word.

In this particular labor he is not alone, however, for Article 16 states that “with the elders he is to exercise church discipline and see to it that everything is done decently and in good order”. He is not a pope who receives into and excludes from the fellowship of the church those whom he pleases but he functions as an elder, who, together with the other elders of the church, perform this important labor. No doubt Christian discipline, in the strict sense of the word, could be enacted with greater simplicity and executed with greater expediency if put in the charge of one individual but this would not be best for the church. There is always too much danger of bias and misuse of a power unequalled for, remember, it is a power that opens and shuts the kingdom of heaven. Besides, it is contrary to the plain testimony of the Scriptures which exhort the congregation to “obey them (plural) that have the rule over you and submit yourselves, for they watch for your souls as they that must give account, that they may do it with joy and not with grief, for that is unprofitable for you”. (Hebrews 13:17) Christ has given authority to the officebearers of His church to punish transgressors with spiritual means. (Belgic Confess. Art. 30) The minister and elders must not take this aspect of their calling lightly nor shirk from those duties that are in their very nature grievous and unpleasant for then “the covenant of God is profaned and the wrath of God is kindled against the whole congregation”. (Heidelberg Catechism, Question 82) In general the church today is very weak with respect to discipline. In many circles it is an unheard of thing; even would-be Reformed circles. The elders of the church are considered as business administrators rather than as disciplinarians. If the minister points out sin, he is regarded as being critical and if he insists that evil doers be punished, he is accused of being: domineering. In other circles the discipline that is found is virtually without power and the members who are living in various forms of iniquity, though perhaps softly admonished, dare nevertheless unreservedly admitted into the fellowship of the church and the table of the Lord.

This is easily understood. This work, properly speaking, belongs to the ministry of the word. Maintaining order and decency in the congregation is a matter of applying the word unto the life of the members. There is a close affinity between these two. Because of this, neglect of Christian discipline is inevitably the consequence of corrupting and distorting the word. When the word is no longer purely preached, proper oversight of the congregation cannot be maintained. Likewise, where the truth of the word is maintained, the necessity of discipline will be felt and its presence will be evident. Mark that church well for there is the true ministry of the word of God.

Concerning the actual execution of the work of discipline we will have occasion to write in another connection when we discuss Articles 71-80 of the Church Order but a few remarks are proper here in as far as this pertains to the duties of the minister. First, of all, the minister (and elders too) should not forget the positive purpose of this work. Whereas the work concerns not only discipline in the narrow sense, namely, in the sense of excommunication, but also all protective and corrective pastoral labors, the aim of these labors is always to maintain the purity of the church of Christ and to bring the members of the church to a richer enjoyment of their salvation. It is a work of grace which aims to build and save. It aims at the abolition of the forces of evil that seek the destruction of the members of the church and the church itself. Because of this it is imperative, of course, that those, who under the name of Christians, maintain doctrines, or practices inconsistent with the command of Christ and who, after having been often brotherly admonished, will not renounce their errors and wicked course of life, and despise these admonitions, shall be forbidden the use of the sacraments whereby they are excluded from the Christian church and, by God Himself from the kingdom of Christ; and when they promise and show real amendment they shall be received again as members of Christ and of His Church. (Heidelberg Catechism, Question 85)

Or, as the Psalmist expresses it, “I will early destroy all the wicked of the land that I may cut off all wicked doers from the city of the Lord”. (Psalm 101:8) Remember how Moses, the minister and servant of the Lord, was instructed by God to cut off from Israel those that transgressed the holy commandments! The first concern of the faithful pastor must always be that the sheepfold of Jesus Christ be kept clean. With this in view he labors with admonitions, rebukes, exhortations and corrections.

This brings us, in the second place, to the consideration that this kind of labor is always very difficult. It lies in the very nature of matters that it should be so. The difficulty springs from a double source. Firstly, the minister, knowing himself to be a sinful man, if often reluctant to apply the word with the severity of Christ. His own sinful self is often projected into his labor. And there is nothing that is more difficult than that one sinner is called upon to admonish and correct another. That such is possible is only due to the fact that the minister labors in the strong consciousness of his calling and in the humble acknowledgement that he has nothing that he has not received. He brings to the sinner not his own word but that of Christ. He comes with the “Thus saith the Lord”, confessing at the same time that the word of Christ also condemns him as he is in himself. That he does not fall under the same disciplinary blow of that word is only due to the grace of Christ. By that grace “I am what I am.” Such labor takes an abundance of grace, indeed!

Secondly, it is a difficult labor because the people of God who need admonition are frequently not receptive thereto. This is especially so when they are plagued with special sins and for a time are apparently in the power of the evil one. There is the element of sinful, human pride. Often it is difficult, if not impossible, to reason with those who cling to certain sins. These sins obstruct their vision of the word of God and the way they should go, making it difficult to convert them from the error of their way. So today, for example, we know of those who complain about the preaching of the word. Though they never register a proper protest showing the defects of the preaching, they do a great deal of wicked slandering, backbiting, gossiping, etc. They say that there are not enough admonitions in the preaching. When they complain they walk in rebellion. When the elders visit them and admonish them (these are the people that complain because of the lack of admonitions in the preaching) concerning their sinful walk, they become furious and refuse to hear of an admonition. What must you think of people like that? O consistency thou art a jewel! It is indeed difficult to continue to admonish and call such to repentance. It takes much patience, longsuffering and prayer. It is a spiritual labor that is possible only through the Spirit who alone can break down the barrier of sin that the heart may be reached by the word.

Finally, the pastor must avoid haste. It is a natural tendency to hastily apply the steps of censure to recalcitrant members in order to rid the church of them but it is not the way prescribed by the Lord. It is the way dictated by the flesh. Of course, there are instances where the sinner gives evidence of nothing but hardening in sin, leaving no other alternative, but where there is still a faint hope, arduous and painstaking labor ought to be expended to save the erring one from the error of his way. However, it should also be remembered that he welfare of the church, her name, her reputation and honor which is the honor of Christ, may never be sacrificed for the sake of one or a few members. The church is more than the individual and her purity may be defamed by those who wantonly persists in sinful ways.

Decency and order! The task of the overseers of the church is to see that these are maintained. Truly, a high calling! “But our sufficiency is of God, who also hath made us able ministers of the New Testament, not of the letter, but of the Spirit, for the letter killeth, but the spirit giveth life.” (II Cor. 3:5) 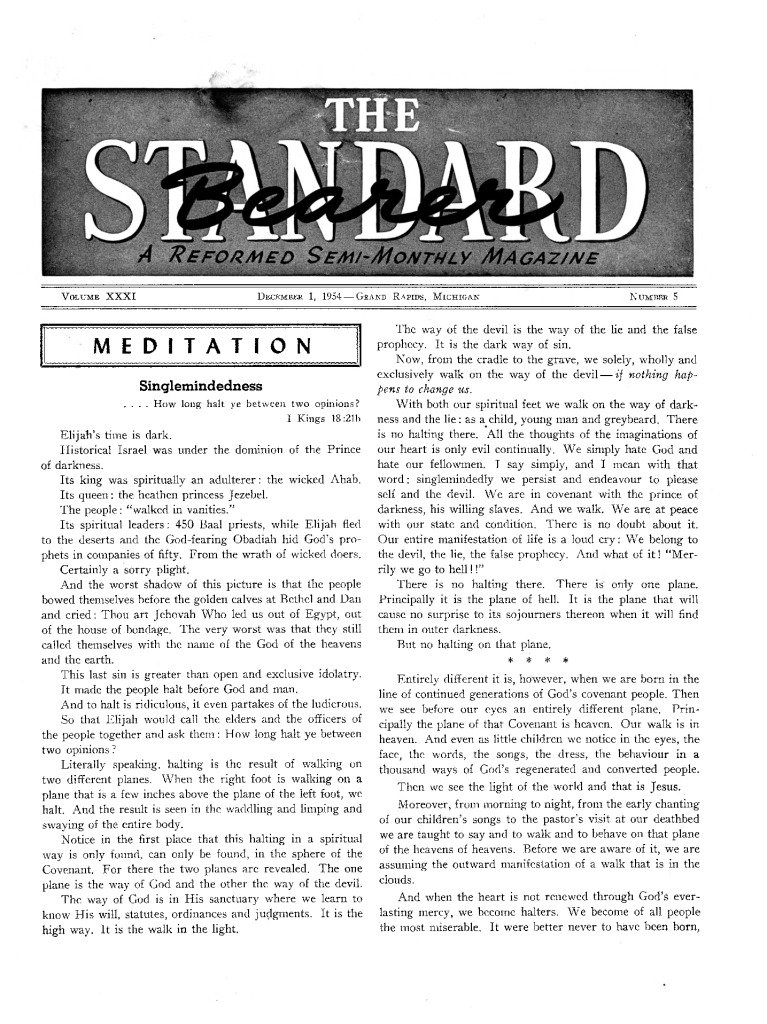