The Mind of Christ

The Mind of Christ

Let this mind be in you, which was also in Christ Jesus: Who, being in the form of God, thought it not robbery to be equal with God: but made himself of no reputation, and took upon him the form of a servant, and was made in the likeness of men: and being found in fashion as a man, he humbled himself, and became obedient unto death, even the death of the cross. Philippians 2:5-8

The mind of Christ! These verses, together with verses 9-11, constitute the classic proof text for the doctrine of the humiliation and exaltation of Christ. And following hard on the heels of verses 1-4, they are also the great example of what the church of all ages needs to remember in order to walk in lowliness of mind and esteem others better than themselves. But most of all, these verses are some of the most beautiful and wonderful verses in the Bible because they showcase our blessed Savior, Jesus Christ—His wonderful character as well as His wonderful gospel of grace and salvation. In particular, they showcase the sheer greatness of the humility of our Savior! And in so doing, they also remind us of our calling as members of His church to be imitators and implementers of that humility.

What an astounding fact it is that the mind of Christ was such that it made Him of no reputation! To appreciate that, let us begin by understanding what the apostle means by telling us that he was “in the form of God” (v. 6a). The word “form” here does not speak of a mere external shape or semblance, but is used in a much more comprehensive way. For example, when we say that a tennis player is in good “form,” we refer to the whole person and the way he affects his actions; we mean that his mental, physical and emotional abilities all work together to accomplish great results. So here, the apostle is saying that Christ possessed the very essential attributes and virtues of God Himself: His righteousness, holiness, mercy, and love! Indeed Christ, in His preincarnate state, was very God Himself! He, being in the form of God, is fully divine! In His divine nature and being, Jesus Christ is the Almighty Creator of all things in heaven and on earth! He is the Law-giver who stands above the law. He is rich, in closest relationship with the Father (John 1:18), and has all the blessings of perfect communion, exalted authority, and divine privilege. He is all-glorious in heaven above!

But what did He do? He thought it not robbery to be equal with God, and made Himself of no reputation. Literally, in the original, He emptied Himself! This does not mean that He gave up His divinity in any way. Rather, the profound meaning is that His status of being equal with God was not something He would keep holding on to, but was willing to let it go, and did indeed do so for our sake! To illustrate this, think of a jewelry box filled with precious gems. Now suppose someone comes and hides all of the gems in a secret compartment of the box. When we look at that jewelry box, we cannot see anything valuable anymore even though the jewels are still in it. This is what is meant here when the Holy Spirit tells us that Jesus “emptied” Himself. In His human nature, Christ emptied Himself of the reputation of being God. He seemed to be just like one of us, an ordinary man. He emptied Himself! He who is rich made Himself poor for our sake (II Cor. 8:9). He gave up everything, including His life! While still being the sovereign Law-giver, He humbled Himself to submit to the law. So poor was He that He did not even have a decent place of birth; He had to borrow an animal to ride on, a room in which to institute the Lord’s Supper, and finally a tomb to be buried in! He gave up His heavenly glory!

“He took the form of a servant,” Paul tells us in verse 7. Servant? “Slave” would be more accurate. And He, as a slave, had no rights! He served not His own interests, but the interest of others. He did not serve Himself but lived as a slave in service to God and, therefore, to that part of the race of man He would redeem!

Further, we are told that Christ was “made in the likeness of men” (v. 7). This speaks of His birth. The Word became flesh and dwelt among us, as inspired John puts it! God became a man! Who can understand the depths of the sheer humility to which Jesus gave Himself?!

And yet there is more. We read in verse 8: “But being found in fashion as a man, he became obedient unto death, even the death of the cross.” In His humiliation, He took upon Himself the curse that was due us. And that, of course, meant death for Him. And no ordinary death, but an accursed death: the curse and wrath of God against sinners on the cross. There on the cross, Jesus was left hanging between heaven and earth—rejected by both! There on the cross, Jesus cried that awful cry that came at the end of those three terrifying hours of darkness, “My God, my God, why hast thou forsaken me?” Who can understand fully the depths of suffering, humiliation, and hellish agony into which the all-glorious Son of God descended, especially during those three hours?

What is the explanation for such humiliation?

We could start by saying that it was necessary. It was necessary that God become a man and be the representative of those given to Him to redeem. There was simply no other way to satisfy the justice of God. He had to be man, sinless man, in order for man to be saved. He had to be God, because no creature could sustain the infinite wrath of God for sin.

And we could certainly say it was a duty for Jesus to do so. For God had appointed Christ to be the Servant of Jehovah. As that Servant, Christ served as the Mediator of God and His covenant for sinners given to Him by God from all eternity. Thus, it would be right to say that Christ was performing His duty by emptying Himself.

And yet, those two explanations do not do justice to the point of the apostle and the message of the text, do they? Indeed, they do not do justice to the message of the entire Bible! For what is the one outstanding explanation and motive for Christ emptying Himself but this: love! Love for His sheep! Love for His friends! Greatest love! For there is no greater love than that a man lay down his life for his friends! (John 15:13). And His friends were not such wonderful people, but sinners! “But God commendeth his love toward us, in that, while we were yet sinners, Christ died for us” (Rom. 5:8). The explanation is love. A necessity of love! A duty of love!! The explanation is Jesus performing the necessity and duty of love for sinners such as you and me!!!

Finally, for the application, we go back to verse 5: “Let this mind be in you, which was also in Christ Jesus.” The application is this: by the grace of God, behold, imitate, and display the mind of Christ! Behold the example of Christ’s loving, self-emptying humility. Imitate it. And finally, display it. “Let nothing be done through strife or vainglory; but in lowliness of mind let each esteem other better than themselves. Look not every man on his own things, but every man also on the things of others.” (Phil. 2:3-4).

Put on the mind of Christ. Put on the attitude of His sheer humility and great love. Put on the sacrificial spirit of Christ! Put off the ego and the empty pride. Put off the quarrelsome spirit, the in-fighting, and all strife! Rather, in lowliness of mind, let each esteem others better than themselves—in every relationship, in every area and sphere of life—in marriage and singlehood, in the home and family, in the church and denomination to which we belong.

May the mind of Christ dwell richly in us and show itself among us all! 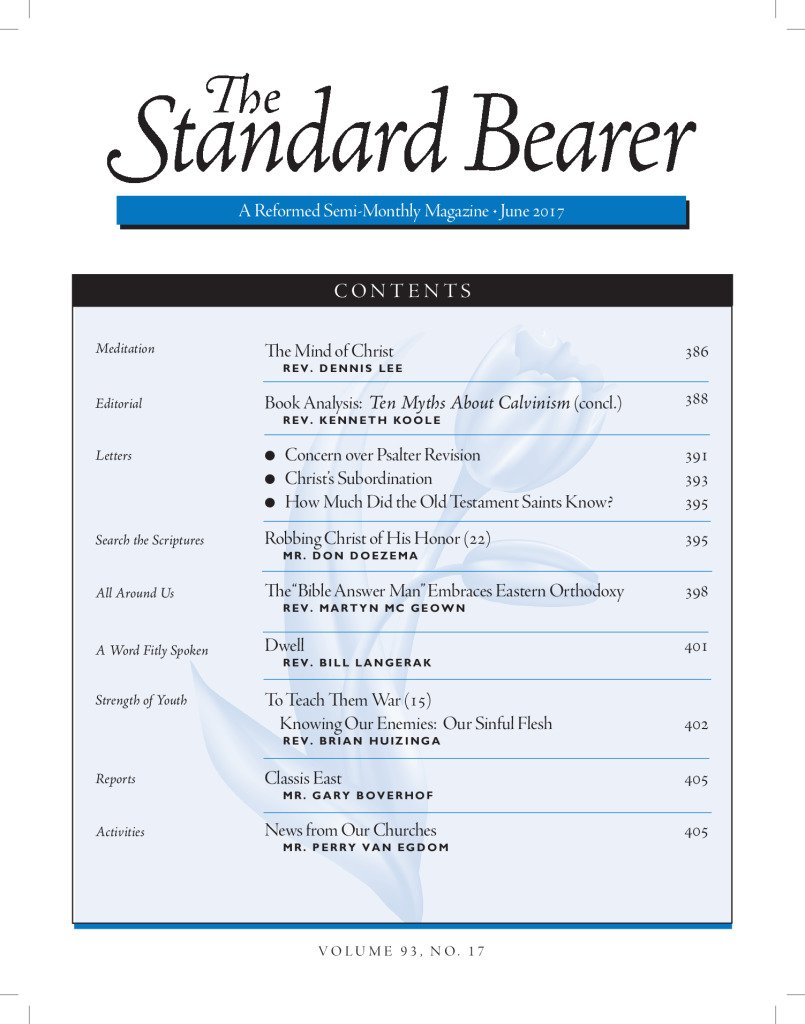