The Messenger of the Covenant

The Messenger of the Covenant

“…and the Lord, whom ye seek, shall suddenly come to his temple, even the messenger of the covenant, whom ye delight in….”

In this prophecy Malachi speaks of the coming of the Messenger of the covenant. That Messenger is Christ.

The first part of this verse is an obvious reference to another messenger, John the Baptist. We read, “Behold, I will send my messenger, and he shall prepare the way before me….” John the Baptist was the messenger of God who was sent by God to prepare the way for the coming of Christ. Christ quoted the first part of this verse in reference to His forerunner. We read in Matthew 11:10, “For this is he, of whom it is written, Behold, I send my messenger before thy face, which shall prepare thy way before thee.”

In Malachi 3:1 He is called the “Messenger” of the covenant. The word “messenger” is the same word which is so often translated in the Old Testament by the word “angel.” Angels are messengers of God. That Christ is called the “Messenger” or “Angel” of the covenant identifies Him as “the Angel of Jehovah” who appeared throughout the old dispensation. He was not a regular angel but the Angel of the Lord.

As the Angel of Jehovah, Christ walked and talked with Adam and Eve in the garden of Eden. He appeared to Abraham with two regular angels of God. As the Angel of Jehovah, Christ led the people of Israel out of the land of Egypt and through the Red Sea on dry ground. He led them through the wilderness and brought them into the promised land. He appeared before them as the cloud of God’s glory which led them by day and night and which filled the tabernacle.

We have a beautiful reference to the Angel of Jehovah in Isaiah 63:9: “… and the angel of his presence saved them: in his love and in his pity he redeemed them; and he bare them, and carried them all the days of old.” The Angel of Jehovah was the Angel of God’s presence because in that Angel, God was present with His people to save them. That was Christ in His pre-incarnate manifestation. He was God’s Angel, God’s Messenger.

Christ is the Messenger of the covenant because He is the One who establishes the covenant with us so that we experience it in our lives. He causes us to have fellowship with God and to know His love and grace. That was true all through the old dispensation. Christ caused Adam and Eve to have fellowship with God as He walked and talked with them in the garden. Christ appeared to Abraham and had communion with him. The same is true of the new dispensation. Christ regenerates us through His Spirit. He gives us faith and repentance. He unites us with God. As a result, we experience covenant friendship with God directly through Him. We walk and talk with God and He with us. Thus the Messenger of the covenant does not merely bring us a message about the covenant but He brings us the covenant itself.

The Old Testament is full of passages which look forward to Christ’s coming. The coming of the Messiah was so central to the old dispensation that we find hundreds of passages which speak of it. These prophecies were themselves part of the preparation for the coming of Christ. They pointed God’s people to Christ and His coming. They not only informed God’s people that the Messenger of the covenant was coming but they produced in God’s true people a longing for His coming. That is what the old dispensation was all about.

John the Baptist was the last of a long line of prophets who spoke of Christ’s coming and thus prepared the way for that coming. He was privileged actually to see Christ when He came. That is what made him the greatest of all the old dispensational prophets.

But that physical temple was only a type of the real temple. The real temple is the body of Jesus Christ. That’s why Christ could say in John 2:19, “Destroy this temple, and in three days I will raise it up.” He spoke of His body, which the Jews would destroy, but which He would raise up on the third day. Thus we have a declaration that when Christ came, the Lord came to His body. The second person of the Trinity in His divine nature took upon Himself a human nature.

The result is that the Word of God tabernacled among us. John 1:14, “And the Word was made flesh, and dwelt among us….” The word “dwelt” means “to tabernacle or tent” among us. God came to live in His house among us. That house is the body of Christ. That is the wonder of the incarnation. The infinite God, who knows no bounds, who cannot be limited by space and time, came to dwell in a body. All the fullness of the Godhead dwells in that body. That is the way God will manifest Himself to us throughout all of eternity. Forever and ever we will see God in the human nature of Christ. Is that not a great wonder?

But that means that the Messenger of the covenant came to dwell with His people, the church. The church is the body of Christ (Eph. 1:22-23). The church is also called the temple of God in I Corinthians 3:16, “Know ye not that ye are the temple of God…?” When Christ came, God came to live in His church. In the body of Christ, God and man are united together. Thus the coming of the Messenger of the covenant brought about the realization of covenant fellowship with God. In the body of Christ, God is our God and we are His people who live with Him.

That brings us to the reception which Christ received when He came to His temple. Notice the verse, “… and the Lord, whom ye seek … even the messenger of the covenant, whom ye delight in….” Here we learn that the coming of the Lord was sought by the people of Israel and that they delighted in the Messenger of the covenant. This cannot mean that the people of Israel as a whole were seeking after the Lord and His coming. That is not so. Israel cared nothing about the true Messiah and His coming. That is demonstrated by the fact that they killed the prophets who were sent to prepare the way of the Lord.

Even at the time that the Lord came to His temple, Israel did not seek after Him and delight in Him. The Messenger of the covenant was born in a stable because there was no room for Him in the inn. That indicates that there was no room for Jesus in Israel, nor in the world. Even though large crowds followed Jesus at first, they soon forsook Him. Most of Israel hated Him. Finally they could not tolerate His presence anymore. They crucified the Lord of glory. “He came unto his own, and his own received him not” (John 1:11).

Rather, the statement of this verse refers to the elect remnant. The Lord came to His church and she delights in her Messiah. She rejoices in her Lord. She finds her peace and comfort in the Messenger of the covenant.

Thus all through the old dispensation the true church sought the coming of Christ. The godly waited for that great day of the Lord. They lived for the coming of Christ. They sought the seed of Abraham, the Son of David. The same was true at the birth of Christ. Think, for instance, of Zechariah, Elisabeth, and John the Baptist in the womb of Elisabeth. Think of the shepherds who went to see the newborn King and the wisemen who came from the East. Think of Anna and also of Simeon who waited for the Lord’s Christ and who saw the Lord’s salvation. God’s people looked for and delighted in the Messenger of the covenant.

And so it must be today. Oh, there is much which seems to be a seeking after Christ which is not. We see that especially at this time of year. There are lights in the streets. People are shopping and buying gifts. Homes are filled with Christmas trees and other ornaments. But we know that in spite of all of that, most people are like the majority of the Israelites. They care nothing about the true Christ. If He were here, they would crucify Him just as the Jews did. Even now they persecute the prophets of the Lord. We must not be fooled by all of this “Christmas” activity. The world hates and rejects the Messenger of the covenant.

But we who are of the elect remnant must seek Him. We may not get caught up in all that the world offers as Christmas. We are to rejoice in His birth. God came in our flesh! The Messenger of the covenant came to His temple! That is a wonderful truth. Do not take it for granted. Do not let it become common. It was a miracle, a great miracle. It is the central miracle of the whole plan of salvation. Rejoice in it and thank God for it.

What is more, we ought to seek the Messenger of the covenant in all of our life. We may not live for this world. Christ is to be our life. We are to seek Him in all that we do. We ought to delight in the fellowship and friendship which we have with God in Him. That ought to be so important to us that we want it more than anything else. For that fellowship with God in Christ is eternal life. 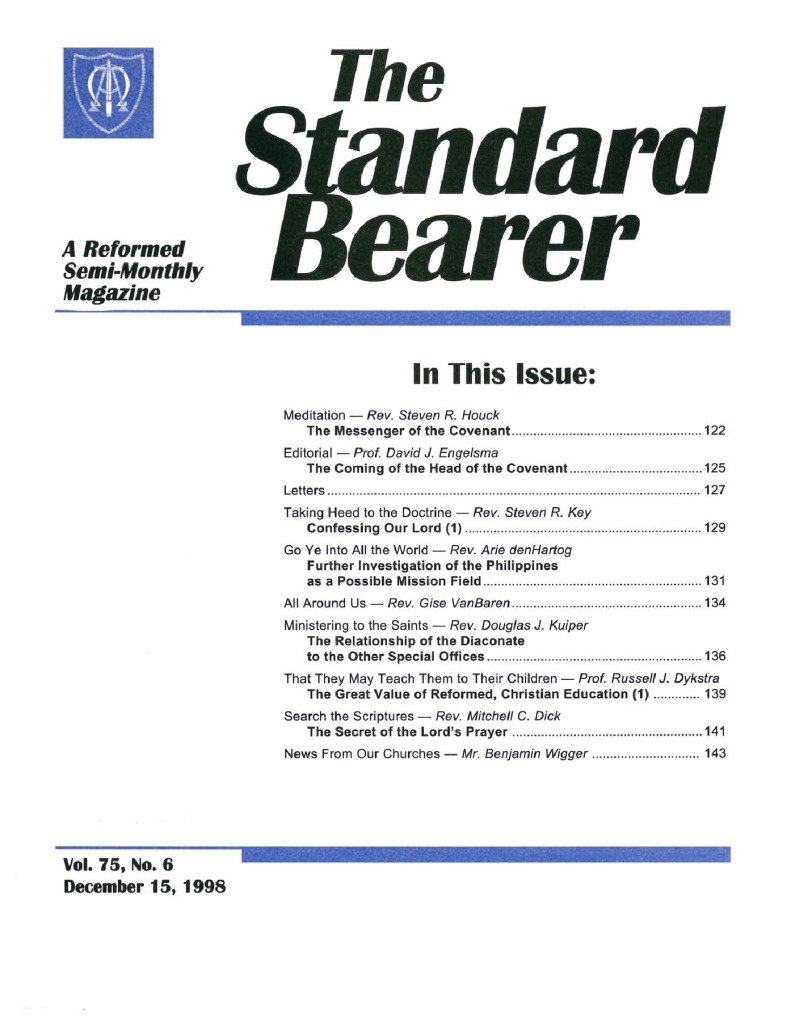