The Beatitudes can be divided in the first four and the last three. The first two speak of the citizen of the heavenly kingdom as being poor in spirit and therefore he mourns. In the next two he is described as being meek and also that he hungers and thirsts. Together they express something negative. Pointing to the inward condition of the citizen of the heavenly kingdom from the spiritual point of view.

The merciful are blessed. The last three beatitudes express the positive side of the character of the citizen. Also here it is impossible to explain these words and apply them to natural man. Sometimes they have been explained to mean when any one sacrifices him or herself for the sake of humanity, God will be merciful to them. Thus it was during the last world war, the blood of natural man given for the sake of the country was compared with the blood of Atonement of the Lord Jesus Christ. And also today this text is used for many philanthropical purposes. Is not the world extremely busy? Drives of diverse institutions for the purpose of charity in many cases find their inceptance in this word of Scripture.

But Scripture always speaks of and concerning a peculiar people.

God’s people are poor in spirit.

They mourn and they are meek.

They hunger and thirst after righteousness.

And they alone are the Merciful.

Hence, they alone shall obtain mercy.

Beautiful word this word Merciful. It is closely connected with the well-known word Grace. Grace is one of God’s virtues that makes Him the Beautiful One. The adorable and desirable One. The One who is really lovable. Therefore God is also Good, because He is beautiful. And when we say good we mean God is absolutely good in His ethical perfections. Mercy is the blessedness of the will and desire, seeking tenderly Himself as the highest good, because God is always in perfect sympathy with Himself.

Here, in the words of the text, it is a virtue which finds its seat in the emotions. Not merely as an impulse, as something just for the moment. God is eternal and is without impulses. He is the same today, yesterday and forever. But in Him is eternally the operation of His emotional will to reach a certain object or purpose.

And again this love of God reveals itself when He reaches His purpose in the revelation of the thing as being perfectly glorious. Or, in connection with the creature, His purpose is to bestow a certain good upon it, that it may become glorious.

Speaking of the citizen of the heavenly kingdom, while in the midst of this sinful world, it is applied a little different. For he is also a creature. Hence it cannot mean that He shall also seek the glorious end in Himself neither the fountain of mercy is to be found in Him. God’s purpose and its final end is always Himself. And His mercy toward men must serve that divine purpose. Therefore, God’s mercy in the citizen of the heavenly kingdom is God’s tender affection bestowed upon Him whereby He seeks His people, changes them inwardly, dwells and lives in them. He, through His Spirit, implants that love wherewith He loves Himself, making them graceful and showing them His divine pity. And thus they become the Merciful.

Thus it is a virtue in the child of God. Whereby they become tender hearted. First of all, toward God as the object of the highest good. He loved His people first and consequently they return His love. That is the keynote of their lives. It expresses their feelings, primarily, an inward emotion as a readiness to feel and to think tenderly of their God. In the second place, and that for the sake of God, the same feeling toward others. The two together therefore, the inward feeling both in relation to the Lord and the brethren, the inward inclination of desiring God. Seeking His face and showing our tender feelings to the brethren. Declaring that God is not only merciful, but that He is the God of all Mercy. Who is blessed for ever and ever and to whom belongs all glory, being the beginning and the end of all that is good and who alone must receive the praises.

Needless to say, when answering the question, who are the merciful, that this can never be applied to the man of the world. The word general is a misfit when applied to grace, mercy, lovingkindness or any other of the Christian virtues. The beatitudes speak of one kind of people, pictured from a seven-fold point of view. Moreover, the text reads, They are filled with mercy, not they became merciful or they showed mercy. But they are filled with mercy, by someone else. The King of His Kingdom filled His subjects with mercy. That is something you cannot find in this sinful world. The world is never filled with the spiritual gifts of God. True it is, they make a show for a little while, but it is only a show and only for a little while. Besides, we know from the Word that the mercy of the world is plain cruelty. Tie world never bothers itself with the inward disposition of the heart. Even the glittering works of charity are the result of the unregenerated heart and must be called by that name. Love for the neighbor? Love for the neighbor without the love of God and the love for God, mercy toward the neighbor without receiving the mercy of God, are nothing less than unselfishness at the best. Reason why the world is satisfied with formal deeds never searching the heart.

But the Lord does search the heart. He does not consider actions apart from the heart. And before Him actions are of no account, unless they are the result of His grace.

The citizen of the Kingdom is pictured from the point of view of His inward feelings. He is tender hearted and in complete sympathy with the God of his salvation, because he possesses the life of the Kingdom of heaven, a life renewed by the operation of the Holy Spirit, with the result that he longs and seeks after God. His delight is the presence of his God and Christ.

And he reveals it. Because he is filled. Evidently meaning that it flows over in him. The heart that tested the mercy of the Lord can manifest mercy. Or to put it in other words, when the mercy of God is ours, that is, if we learned to see God’s mercy in the forgiveness of our sins through the blood of Jesus Christ, it follows from the very nature of the case, that we are tender hearted, filled with lovingkindness, having pity on others and that for God’s sake.

And thus it brings him to continual and deeper knowledge of self. A man filled with mercy looks for sin in self first of all. He knows sin to be sin and to be his sin. Resulting in true humility. He will humble himself before the face of his God from day to day. He will be humble as a citizen in the Kingdom of his God and he will be humble before the brethren. Thus he is able to deny himself, not being haughty and not seeking his own honor and glory. He is indeed made ready for service. And he will be satisfied as long as the cause of his God prospers.

This is also in harmony with the citizen of the Kingdom when we keep before us the beatitudes as a whole. They called the citizens as being poor in spirit, one who mourns and who is meek, while he hungers and thirsts after righteousness. It does not take a rich man but one who is poor to know what it means to be poor. There is no room for boasting about riches when one has none. Spiritually the poor in spirit have nothing to boast of and you may depend upon their judgment. Thus it requires a man filled with mercy to appreciate mercy, the mercy of his God. He knows and feels and pities.

That is also his blessedness. Is the knowledge of being a recipient of mercy such a blessedness? It surely is. It will make and keep him humble. It will cause him to depend upon God alone. His eyes are fixed upon God’s works of mercy, that is upon the cross of Jesus Christ, the merciful High Priest.

That is his blessedness because it is of great comfort. Mercy is the gift of the grace of God. Therefore, it is God’s own work resulting in peace of heart and mind. Seemingly all things remain the same according to the judgment of the world. Besides, often many things are against him. He is poor and despised according to the standards of natural man. He cannot get along with the men of this world and they do not understand him when he speaks of that mercy and the God of his mercy. Yet, God through Christ has revealed Himself through His Spirit to and in him. Thus he knows: I am a citizen of the heavenly Kingdom.

And he shall obtain mercy. From the starting point until the finish God will provide of His mercy.

The starting point is the knowledge of his misery. There the Lord revealed His mercy. And while there is a tremendous distance between this beginning and the point of arrival, that is the eternal glory. But God’s mercy is sufficient and able to travel the full length of the road.

From day to day God’s mercy cannot become exhausted for it is eternal. New every morning. Sufficient in the midst of all kinds of enemies and in all circumstances. Also sufficient in both life and death.

And presently we shall see Him face to face obtaining His mercy to the full in the eternal morning. 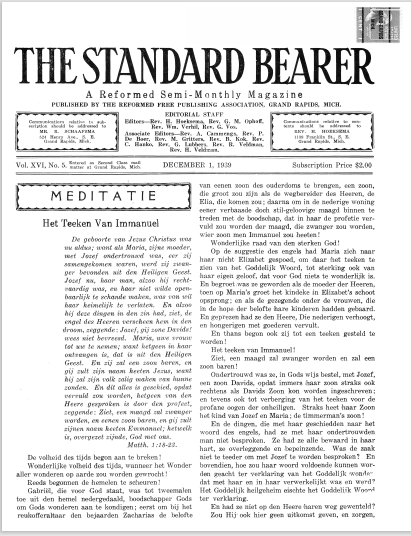