The Life of Guido de Bres

The Life of Guido de Bres

For someone in the Reformed tradition, the influence of Guido de Bres upon Reformed churches goes without saying. Most of that influence stems from his writing of the Belgic Confession, which has served Reformed churches since the sixteenth century. de Bres’ influence, of course, is not due so much to his genius and zeal for the Reformed faith, although he certainly had his share of both. Rather, his influence is due to God’s providential guidance of history, bringing de Bres into the picture and using him to leave a lasting signpost of Reformed doctrine. The life of Guido de Bres is a story of God’s providential preservation of a man and of the church.

The providential hand of God was working even before de Bres was born. We pick up the story in the year 1522, with de Bres’ mother transfixed by the preaching of an Italian monk. As she listened, Guido’s mother, a devout Roman Catholic, prayed for a son who would be a powerful preacher like this monk. Little did she know that her baby boy, Guido, born that year, would be used mightily by God to battle the errors that enslaved her and so many others.

Exactly how God used Guido’s father and mother to influence their son throughout the years, we cannot tell. When he was yet a teenager, Guido received his first Bible, a rare and dangerous privilege in that day. Sometime before the age of twenty-five, through the reading of Scripture and the testimony of the Reformers, Guido came to see that his salvation was in Jesus Christ alone, by faith alone, apart from any merit of his own.

By 1548, the now “heretical” Guido made the decision to travel to England, where he was able to imbibe Reformed theology and practice from the likes of Martin Bucer, Calvin’s friend from Strasburg, and John a Lasco, the Polish Reformer.

In 1552, de Bres returned home to preach God’s Word amidst persecution. Basing himself in the city of Lille, he became an itinerant preacher, ministering to the saints secretly in their homes, in the Church of the Rose.

In 1555, de Bres wrote his first book, The Staff of the Christian Faith, which defended the Reformed faith and exposed the errors of Rome. Coincidentally, 1555 was the same year in which Philip II succeeded his father, Charles V, as king. Almost immediately Philip would begin his all-out attack on Protestant Christians in his realm. In March of 1556, a father, mother, and two sons from de Bres’ church were captured and burned at the stake for their faith.

As a result of the persecution, many of the congregants decided to flee with de Bres to Frankfurt, Germany, where refugee churches had been established. It was not long, however, before de Bres moved on to Switzerland, where he studied Greek and Hebrew for three years under Theodore Beza as well as benefiting from John Calvin’s preaching.

But de Bres could not keep himself from serving the persecuted church in his homeland. In 1559, he returned to Doornik (Tournai, France), not far from the city of Lille, where he had labored some three years earlier. The Church of the Palm, located in Doornik, benefited from de Bres’ ministry. de Bres, in turn, found a help meet for him in Catherine Ramon, whom he married the same year.

During his time at Doornik, de Bres busied himself with the pastoral work of preaching as well as working on a confession of faith, which would later become known as the Belgic Confession or the Netherlands Confession. He understood that a confession was an important tool for unifying believers in the truth. Because almost every article of the Confession touched on the errors of Rome, it was also important to prove that the Confession was biblical. Consequently, de Bres not only set down what the churches believed, he also added Scripture references to prove each article.

de Bres was not so foolish, however, as to write a confession totally on his own. Much of the confession he wrote was based upon the Gallican (or French) Confession adopted by the Synod at Paris in 1559. The Gallican Confession itself was a product of Calvin’s labors and the churches in France. Theodore Beza’s Lausanne Confession was also an important source for several of the articles of de Bres’ Confession (especially Articles 19, 20, and 37, although other articles also show Beza’s influence).

Furthermore, understanding the value of consulting others in such a work, de Bres communicated with many other ministers, asking them to correct whatever they thought was amiss. Therefore, when the Confession was first published in the Fall of 1561, it did not represent merely one man’s convictions. Indeed, the first publication was properly entitled “A Confession of the Faith generally and unanimously maintained by the Believers dispersed throughout the Low Countries, who desire to live according to the purity of the holy Gospel of our Lord Jesus Christ.” Far from being divisive, a charge that many make against confessions in today’s church world, de Bres’ Confession served to unify the churches in the faith.

Persecution for the faith

Before de Bres’ arrival in Doornik in 1559, the saints were no strangers to persecution. However, fifteen years having passed since the martyrdom of Pierre Bully, de Bres thought he could work behind the scenes without raising the ire of King Philip’s forces. Through secret, after-dark house meetings, many poor as well as influential citizens came over to the Reformed faith. Pastor Jerome (de Bres’ alias) was being used mightily in Doornik.

As the church expanded, some of the less educated became impatient and decided to agitate for greater freedom to worship. On September 29, 1561, against de Bres’ advice, they organized Psalm-singing demonstrations in the streets. As a result, King Philip’s regent, Margaret of Parma, quickly dispatched royal commissioners, who arrested and interrogated hundreds of people to find out who was responsible for the disturbance. It was not long before the commissioners discovered the existence of the secret church and Pastor Jerome.

In hiding and unable to flee the city, de Bresand others decided that now was the time to present his Confession to prove that they were not rebels as the king’s commissioners made them out to be. Article 36 of the Confession testified for them: “[I]t is the bounden duty of every one, of what state, quality, or condition soever he may be, to subject himself to the magistrates; to pay tribute, to show due honor and respect to them, and to obey them in all things which are not repugnant to the Word of God.” The letter also showed the injustice of their persecution: “…[O]ur enemies have filled your ears with so many false complaints and reports that we were not only prevented to appear before your face personally, but also chased out of your lands, murdered, and burned in whatever place we were found.” At the same time, the letter attached to the Confession expressed their willingness to “offer our backs to the whip’s lash, our tongues to the knives, the mouth to the muzzle, and the whole body to the flames” rather than deny Jesus Christ. It being impossible to present the Confession and letter in person, they threw it over the wall of the castle.

Although the city remained under lockdown, de Bres was able to escape in December of 1561. However, in God’s providence the commissioners found his lodging and books, etc., thus making him a known “heretic.” For five years de Bres lived in exile in French towns near the border, ministering to the Huguenot saints. During that time, the cause of the Reformation continued to prosper. In May of 1566, de Bres attended the first synodical meeting of the Lowland churches in Antwerp, where his Confession was officially adopted. Subsequently, he was invited to return to Antwerp to preach in July. In August, he was asked to help the Church of the Eagle in Valenciennes, about 25 miles from Doornik.

Throughout the month, de Bresand another minister by the name of De la Grange preached in the fields surrounding Valenciennes. As the Reformation surged ahead, many people began to take matters into their own hands. They ransacked Roman Catholic cathedrals, including two in Valenciennes. Under pressure, the regent Margaret of Parma signed a treaty to allow free preaching and dissolve the Inquisition. Nevertheless, Philip II responded by sending troops to subdue Protestant cities. In response, Valenciennes closed its gates to the king’s forces, expecting that Prince William of Orange would come to help the Protestant cause or that the Hugeunots would take up arms against the king’s forces. In December of 1566, Valenciennes was officially declared a rebel city. In February of the next year, to the dismay of the people, Prince William of Orange informed them that he had abandoned his plan to help them. Finally, in March, Philip’s men attacked and entered the city.

Not surprisingly de Bres was depressed over his capture. In a touching letter to his wife from prison, de Bres comments on the doctrine of Providence: “It is very true that human reason rebels against this doctrine and resists it as much as possible and I have very strongly experienced this myself. When I was arrested, I would say to myself, ‘So many of us should not have traveled together…. We ought not to have been arrested.’ With such thoughts I became overwhelmed, until my spirits were raised by meditation on the providence of God.” By God’s grace, de Bres clung to the truth of God’s providence: “Now remember that I did not fall into the hands of my enemies by mere chance, but through the providence of my God who controls and governs all things, the least as well as the greatest.” de Bres’ attitude exemplified the very truth contained in Article 13 of his confession: “This doctrine affords us unspeakable consolation, since we are taught thereby that nothing can befall us by chance, but by the direction of our most gracious and heavenly Father….”

On May 31, 1567 as he was led to be hanged, de Bres expressed his joy over the privilege of dying for the sake of the gospel: “I never dared to think that God would do me such an honor.” With a noose around his neck, de Bres admonished the people to be faithful to the Word of God and to submit to the magistrates. Before he finished speaking, de Bres was thrown from the ladder to his death.

His persecutors were able to silence de Bres’ speech. But they were not able to suppress the truth of his Confession. “The body they may kill, God’s truth abideth still.”

Wonderfully, the Confession penned by God’s servant Guido de Bres continues with us today some 450 years after it was first published, still serving faithful churches of the Reformation. 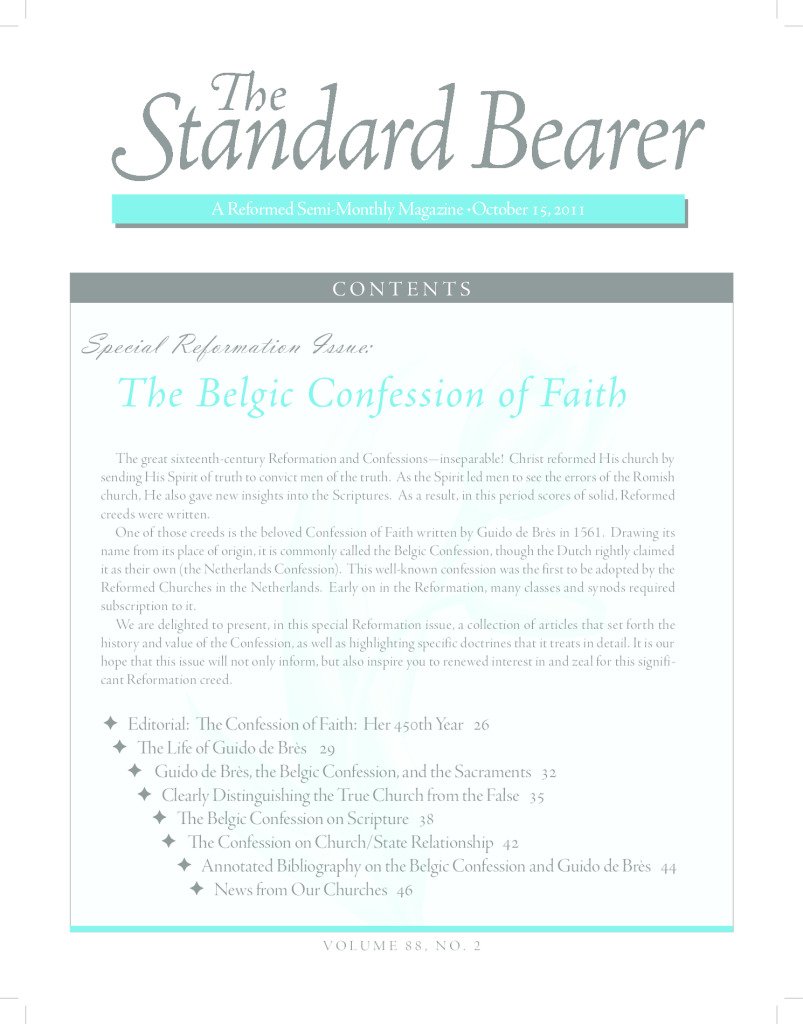