Holiness was the property of God’s priests, of Aaron and his sons. We learn this from Moses’ reply to Korah, “Tomorrow the Lord will shew who is His, and who is holy; and whom He makes to draw near to him; and whom He chooses will He make to draw near to Himself” (Num. 16:5). Now whereas the whole congregation was holy, what was meant is that Aaron and his sons (the priesthood) possessed this property in a peculiar sense. This raises the question, What was the symbolical holiness of the priesthood? And the answer: It was the holiness that resulted from the performance upon them of the rites of consecration; it was the holiness further that consisted in the beauty of their official dress and in the anointing oil that was applied to their person. Let us now shed the necessary light on these statements.

The first rite to be performed upon Aaron (and his sons) was that of the washing (Lev. 8). Moses, in obedience to the Lord’s command went to the tabernacle, taking with him Aaron and his sons, and the garments and the anointing oil, and a bullock for a sin-offering, and two rams and a basket of unleavened bread for the offerings. He gathers “the whole congregation”—that is, the nation in the person of their elders—there also. Bringing Aaron and his sons Moses washed them with water. This was not done merely for the purpose of freeing their bodies from filth. The action formed a religious rite. It denoted the washing away of sin by the blood of Christ. It was performed upon Aaron for the purpose of supplying him with a synodical-typical purity or holiness. Having washed Aaron, Moses clothed him in the dress, especially designed and made for the high priest. Having dressed him, Moses poured the anointing oil upon his head. He thereupon sacrificed four offerings—a sin, burnt, peace, and meat offering—to the Lord in the behalf of Aaron and his sons. Of the blood of the peace offering Moses took and put it upon the tip of the right ear of Aaron and his sons, and upon the thumb of their right hand, and upon the toe of their right foot. Of this blood and of the anointing oil he also sprinkled upon Aaron and his sons and upon their garments (Lev. 8).

This then was Aaron’s holiness, namely, the bodily cleanliness that resulted from his being washed with water, the beauty of the dress in which he, as priest, was clad, the sweet fragrance of his anointed head, the anointing oil and the blood of the sacrifice as sprinkled upon his garments, the blood of the sacrifice as put upon his ear and hand and foot. Through his being supplied with this (symbolical) holiness, he was consecrated to the office of high priest and, as so consecrated, possessed the right to perform the work of a sacrificer, the right to atone the sins of this people in the holiest place. But Aaron’s holiness was shadow, symbol. The cleanliness that resulted from his body being washed with the water of consecration, signified the perfect moral purity of Christ, and the splendor of his dress was the emblem of Christ’s spiritual beauty, of the righteousness and salvation with which the Father clothed Him, when He raised Him up and set Mm together with His people in heavenly places, and this in fulfillment of the promise, “I will clothe her (Zion’s) priests with salvation” (Ps. 132:16b). Not the splendor of Aaron’s material robes, but holiness is the true adorning, garment of God’s priests. Such is the teaching of this scripture. It is a teaching that one encounters over and over in Holy Writ. Unto them that mourn in Zion will He give garments of praise for the Spirit of heaviness (Isa. 61:3). The apostle Peter exhorts God’s people to be clothed in humility (I Pet. 5:5). And in another section of this same epistle wives are told that they are not to let their adorning be “that outward adorning of plaiting of hair, and of wearing of gold, or of putting on of apparel; but let it be the hidden man of the heart, in that which is not corruptible, even the ornament of a meek and quiet spirit, which is in the sight of God of great price. Finally, in his vision John saw those who came out of the great tribulation arrayed in white robes—robes which they had washed and made white in the blood of the Lamb. (Rev. 7:14). The propriety of likening righteousness, praise, salvation and meekness to a garment, the fitness of calling the Christian virtues true adorning, springs from the circumstance that the earthy is a symbol of the heavenly. If this is true of the earthy in general, it was especially true of the official garments of the Levitical priesthood. These garments in their beauty formed the earthy replica of Christ’s spiritual adorning. He, therefore, was God’s true priest. And He is this as He is holy, harmless, undefiled, and separate from sinners. (Heb. 7:25). The thought conveyed is not merely that He was free from sin, but that He knew no sin in the sense that His moral purity was native by virtue of His being conceived and born in holiness. Therefore He needed not as Aaron to offer up sacrifice first for His own sin. and then for the people’s: for this He did once, when He offered up Himself. And the “odour of sweet” smell in His sacrifice was His perfect obedience, his hearing the voice of God only, His doing the will of the Father, and His running the way of His commands. And the figure of this His devotion was the tip of Aaron’s right ear and the thumb of his right hand and the great toe of his right foot as stained with the blood of the ram of consecration. This rite has occasioned questions. Why were only the right ear and the right thumb and toe sprinkled with blood? Why were not both ears and both hands and both feet sprinkled? The one corresponding member was included in the other; since both the ears and both the hands and feet have the same object, and their offices are so connected, that what is said of the one applies to the other. Another question is, why the ear and the foot, and hand, were smeared rather than the breast and the tongue. And the answer: By the ear obedience was designated, and by the hands and feet all the actions and the whole course of life, the integrity of the whole life, and the walk for the direction of living. And, inasmuch as the foundation of well doing is obedience, which is preferred to all sacrifices, Moses was commanded to begin with the ear. And in the three members sprinkled was embraced whatever related to the atonement.

There is scarcely anything more common in Scripture than these figures, by which the cleanness of the hands is taken for the integrity of the whole life, and the sanctified foot for the right way of life and the sanctified ear for obedience. The wicked one walks in his own counsel, which is the counsel of the ungodly; he doeth evil. His feet are swift to shed blood. Destruction and misery is in his way; and the way of peace he knows not. But the feet of Christ, God’s true priest, were set upon a rock, and they were not suffered to be moved. He turned in perfect obedience His feet to God’s testimonies. He refrained His feet from every evil way. The lamp for His feet was the word of His God, and this word only. Thus His feet stood within God’s gates. And his hands were pure. His right hand was a hand of truth, it was full of righteousness. Therefore did God also uphold Him with His hand, save Him with His hand, deliver Him out of the hand of the unrighteous, and say to Him, Sit thou at my right hand, until I make thy enemies thy footstool. As to the ear of Christ, it was an ear of perfect hearing, inclined solely to the wisdom of God and unto His sayings. Therefore did God also incline His ear unto Christ’s prayer, bow down to Him His ear and deliver Him.

What is said of the consecration of Aaron does not apply to Christ’s very own person, but refers to the profit of His people; for neither was Christ anointed for His own sake, nor had He need to be endowed with grace from His own blood. It was for the sake of His people that He sanctified Himself, for the sake of this people whose head He was and is, and whom in His fathomless love He carried upon His heart and bore, so to say, upon His shoulder,—His people, whom He possessed everlastingly, thus even before the foundation of the world in the counsel of the Father,—possessed as a people, chosen in Him unto life everlasting and thus, by virtue of that election, conformed to His image, called and justified and glorified with that same glory that He in His office of Mediator, had with the Father in His counsel before the world was.

Let us consider once more in this connection that portion of Aaron’s dress, called the breastplate, that woven fabric of the same material and of the same kind of work as the ephod, and in which were set the four rows of precious stones. The totality of these stones signified, in their glistening beauty, the people of God not in the ugliness of its sin and pollution, but in the glory of its salvation, which is the glory of Christ. It was this people in its heavenly perfection that the Father has everlastingly engraved in the palms of His hands, and that Christ everlastingly clasped and was clasping to His heart when He offered Himself. And unto the justification of this people, He was raised. With this people, He was set in heavenly places. And He went in into the holy place and stands everlastingly in the presence of God, bearing upon His heart this people, for a memorial before God continually. Such is God’s will; for He loveth this people in their glory, which is the glory of Christ, and therefore wills to have it everlastingly before His eye as clasped to the heart of Christ in whom He chose and saved it unto His glory and who is thus everlastingly the sanctification, the righteousness, the wisdom and redemption of this people.

As has been pointed out, the clothing of Aaron (and his sons) was followed by the anointing, which was performed first upon the tabernacle and its furniture; then upon the altar of burnt offering with its utensils and upon the laver and its foot; and after this upon Aaron by the pouring of the holy oil upon his head. That Aaron (and his sons) as well as all the vessels, should be consecrated with oil was because without the influence of the Spirit all the sacrifices would be unsavory. And it is by the operation of this same Spirit that Christ was made the peacemaker between God and man; because this dignity would not otherwise belong to Christ’s human nature. Aaron was therefore anointed together with his sons. 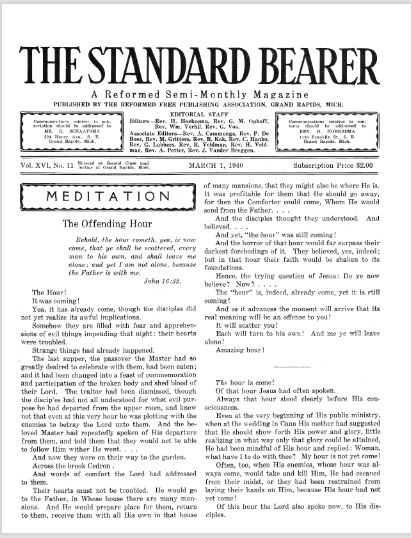