The Lausanne Congress On Evangelism

The Lausanne Congress On Evangelism

Lausanne, Switzerland is about forty miles from Geneva, the home of John Calvin during most of the years of his reformatory labors and the site of the headquarters of the World Council of Churches (WCC). Gathered at Lausanne were some 2400 official participants and a large number of observers for the International Congress On World Evangelism. Members of the Congress came from over 150 nations to consider together the calling of the Church to bring the gospel to every creature.

The idea of such a Congress was born in the mind of Billy Graham, who also functioned as honorary chairman, and was put together by a planning committee of twenty-nine members with the help of 150 international evangelical leaders functioning as conveners. The Congress met for ten days for speeches, conferences, discussions of position papers and strategy papers—all for the purpose of uniting evangelicals to get on with the task of “evangelizing the world.” The Congress climaxed with the signing of a rather lengthy document called “The Lausanne Covenant” by most of the participants and some observers in which was expressed “an evangelical consensus on matters” affecting evangelism.

The Congress was obviously in competition with the World Council of Churches. Many evangelicals have become disillusioned with the WCC. The areas of disagreement are two. Many are unhappy with the WCC because of the increasing emphasis which this organization puts upon social involvement. Others express concern over the fact that the WCC more and more leans towards the position that the Christian faith ought not to enter into competition with pagan religions and Jewish orthodoxy. Leaders of the WCC have expressed the conviction that faith in Christ is not essential to salvation, but that the convictions of any man, regardless of his religion, are sufficient.

The competition into which the Lausanne Congress entered was evident in various ways. The mere fact that the Congress met so near WCC headquarters was intended to serve notice to the WCC that it had better change its stance on various issues if it wants evangelical co-operation. There were also various articles in the “Covenant” which were quite obviously aimed at positions in the WCC. E.g., in Art. 4 the Congress stated: “We also reject as derogatory to Christ and the gospel every kind of syncretism and dialogue which implies that Christ speaks equally through all religions and ideologies.” Further, in Article 5 we find the statement: “. . . Reconciliation with man is not reconciliation with God, nor is social action evangelism, nor is political liberation salvation . . . ” While the Congress did not become a self-perpetuating body and did not set up an official structure, nevertheless, a Continuation Committee of thirty members will be chosen to carry on the work of the Congress. And it was the expressed hope of many delegates that a permanent organization would result which would, in time, replace the WCC in the allegiance of evangelicals.

An evaluation of the Lausanne Congress would show that it was a rather typical evangelical meeting. The “Covenant” shows that there are some strengths in the evangelical movement. There are parts of the Covenant which are basically sound. E.g., Article 2 deals with “The Authority and Power of the Bible.” The committee to draw up the preliminary document did not present as strong a version as was finally incorporated into the text. The strengthening of this article was due to the suggestion of Francis Schaeffer, the well-known leader of ‘L Abri in Switzerland. It reads:

We affirm the divine inspiration, truthfulness and authority of both Old and New Testament Scriptures in their entirety as the only written word of God, without error in all that it affirms, and the only infallible rule of faith and practice. We also affirm the power of God’s word to accomplish his purpose of salvation. The message of the Bible is addressed to all mankind. For God’s revelation in Christ and in Scripture is unchangeable. Through it the Holy Spirit still speaks today. He illumines the minds of God’s people in every culture to perceive its truth freshly through their own eyes and thus discloses to the whole church ever more of the many-colored wisdom of God.

Furthermore, the Congress, by its “Covenant” repudiated such modern heresies as Universalism, Syncretism, and Humanism. As a slap at the WCC, it reaffirmed its intention not to support the social gospelism of that organization.

But there are many weaknesses. If the Congress had met in Lausanne during the days of John Calvin and he had been an interested observer from his vantage point in Geneva, he would have left the Congress with a heart saddened by the colorless and bland Arminianism of the “Covenant”.

As is characteristic of evangelicalism, the “Covenant” is an Arminian document. This is true from two different points of view. On the one hand, the “Covenant” fails entirely to set forth the truths of sovereign grace rooted in sovereign election. The closest that the “Covenant” comes to anything resembling this is a statement in Article 14: “We believe in the power of the Holy Spirit. The Father sent his Spirit to bear witness to his Son, without his witness ours is futile. Conviction of sin, faith in Christ, new birth and Christian growth are all his work.” But on the other hand, even this mild and bland statement is contradicted by other statements which set forth clearly the Arminian position. While liberal Universalism is rejected, the “Covenant” nevertheless affirms: “. . . God loves all men . . .” (Article 3) Or again, in the same article: “To proclaim Jesus as ‘the Saviour of the world’ is not to affirm that all men are either automatically or ultimately saved, still less to affirm that all religions offer salvation in Christ. Rather it is to proclaim God’s love for a world of sinners and to invite all men to respond to him as Saviour and Lord in the wholehearted personal commitment of repentance and faith.”

It is not surprising that, within this context, the Arminian ideas are set forth of a gospel which is “an offer,” “an invitation,” a means of “persuading people to come to (Christ) personally and so be reconciled to God.” (Cf. Article 4 on “The Nature of Evangelism”) There is no mention whatsoever of the gospel as the power of God unto salvation; as the sovereign means whereby God calls His elect out of darkness into light, and as a means to harden the reprobate in the way of their impenitence and unbelief.

Such Arminianism is, after all, a form of Universalism insofar as a “gospel offer” is a manifestation of auniversal love of God. It is a peculiar thing that evangelicals cannot seem to get it through their heads that this “mild” form of Universalism is after all a fundamental concession to the most liberal Universalism; and that therefore, Arminianism is incipient modernism. The path which the Lausanne Congress has chosen to walk is the path which leads, in a matter of a short time, into the arms of the WCC which organization they have tried so hard to condemn.

Another interesting facet of the Congress was the struggle over the question of the social calling of the Church. There were many so-called “Third World” representatives present. Especially these pushed hard to bring the Congress to the position of taking a social stance towards the world’s problems. According to reports, a great deal of the discussion and debate of the Congress centered exactly in this question. In fact, there were many “rump sessions” of representatives who were not satisfied with the direction the Congress was moving in this area.

But the position of the “Covenant” is ambiguous. On the one hand, the “Covenant” explicitly repudiates the trends found in the WCC. But on the other hand, a rather strong statement on the Church’s social responsibility was included. Article 5 is entitled “Christian Social Responsibility”, and reads:

We affirm that God is both the Creator and the Judge of all men. We therefore should share his concern for justice and reconciliation throughout human society (This second statement is supposed to be a conclusion from the first, a conclusion indicated by the use of the word “Therefore”. But how this statement follows from the first is more than I can see. Why does the fact that God is both Creator and Judge of men necessarily imply that God is concerned for justice and reconciliation throughout human society, and why does it follow that we must share that concern? Of such non sequiturs are heresies made. H.H.) and for the liberation of men from every kind of oppression. Because mankind is made in the image of God, every person, regardless of race, religion, color, culture, class, sex or age, has an intrinsic dignity because of which he should be respected and served, not exploited. Here too we express penitence both for our neglect and for having sometimes regarded evangelism and social concern as mutually exclusive. Although reconciliation with man is not reconciliation with God, nor is social action evangelism, nor is political liberation salvation, nevertheless we affirm that evangelism and socio-political involvement are both part of our Christian duty. For both are necessary expressions of our doctrines of God and man, our love for our neighbor and our obedience to Jesus Christ. The message of salvation implies also a message of judgment upon every form of alienation, oppression and discrimination, and we should not be afraid to denounce evil and injustice wherever they exist. When people receive Christ they are born again into his kingdom and must seek not only to exhibit but also to spread its righteousness in the midst of an unrighteous world. The salvation we claim should be transforming us in the totality of our personal and social responsibilities. Faith without works is dead.

The difference between this statement on social responsibility and the position of liberals is only one of degree. There is no basic doctrinal difference between the two positions. Evangelicals are simply not yet prepared to go as far as liberals and modernists. But when one sets himself upon a given path, he will move ahead. He cannot stand still. The official delegates at Lausanne are walking down a road that leads to WCC headquarters in Geneva.

And so, in conclusion, we ought to observe that once again evangelicalism has taken a giant stride in the direction of using evangelism as a means to further the cause of ecumenicity. This was begun with the whole Key ’73 Program; it is continuing at Lausanne; what shall be the next step in that direction time will tell. 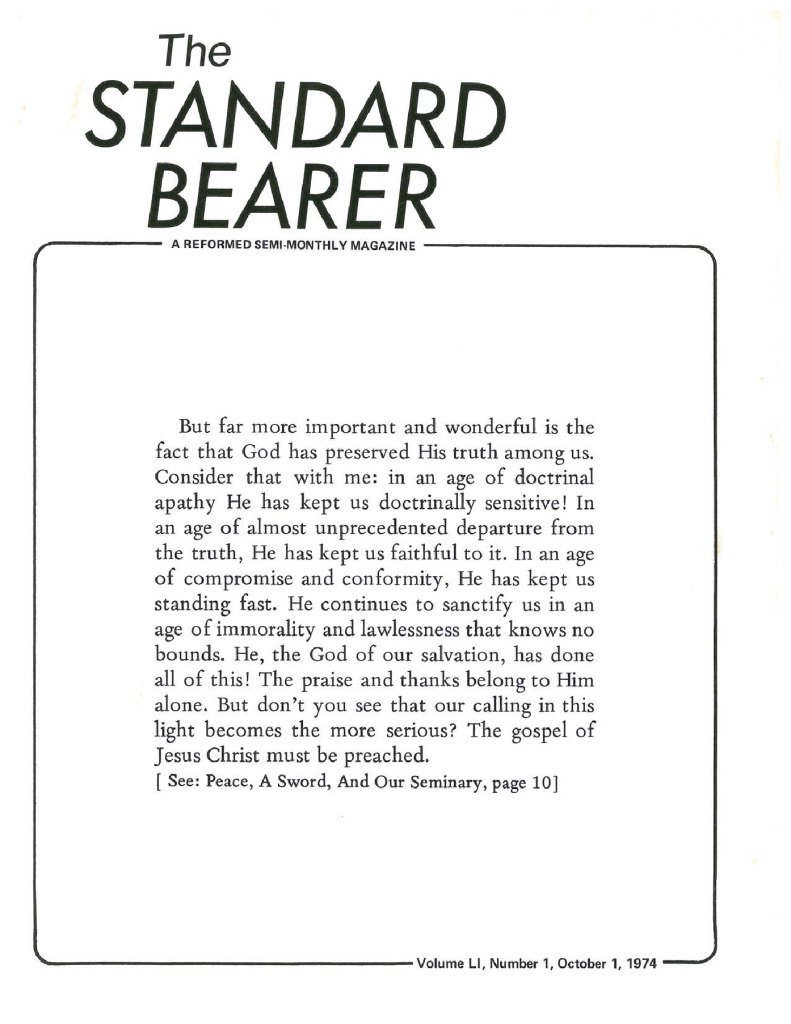