The Last Time: How Are We Living

The Last Time: How Are We Living

That we live in what the Bible calls “the last time” there simply can be no question. The signs of Christ’s coming about which our Lord Jesus Christ spoke to us in a passage such as Matthew 24 are all being fulfilled: wars and rumors of wars, nation rising up against nation, famines, pestilences, and earthquakes. All these are occurring today in ever greater measure. With respect to Jesus’ statement that in the last time “false prophets” would arise, and that those false prophets would “deceive many,” one does not have to think too hard or too long to realize that what Jesus said is indeed true. There are many false prophets today, yes, even in what is called Reformed circles. Indeed, we, you and I, live in the last time.

And as I said, that question is so very crucial for us today. Do not say to yourselves, “Oh, it really doesn’t matter how we live. We can enjoy the pleasures and treasures of this life for a season. The end is not yet. We have plenty of time before the end comes, before we have to think about living our lives as Jesus would have us live them.” Oh, no! It is crucial as to how we live in this last time, so crucial in fact that our very salvation is dependent upon it. Our very salvation, for Jesus Himself says in Matthew 10:32-33, “Whosoever therefore shall confess me before men, him will I confess also before my Father which is in heaven. But whosoever shall deny me before men, him will I also deny before my Father which is in heaven.” How are we living in the last time?

That we may answer that question in a right way, I have decided to use the space that is allotted to me in theStandard Bearer, not only in this issue, but also in the following issues, to call our attention to the Word of God as it comes to us in the book of Daniel. Yes, Daniel! And I have decided to do that exactly because the book of Daniel has so very much to say to us as to how we are supposed to live in the last time. In this issue we consider together the first seven verses of Daniel, chapter 1.

Be not deceived. I assure you, that sort of thing that happened to those four children of God can, and not only can, but will happen to us. And it will happen to us exactly because Nebuchadnezzar and Babylon is in Scripture a type of this antichristian world: this antichristian world which hates Christ, and which opposes Christ and which does everything in its power to stop the cause of Christ’s kingdom and covenant. And we live in that world. There will come a time when we will wake up in the morning to find that the doors of our Christian schools will be shut. There will come a time when we will look in our children’s bed, and our children will be gone! They will be snatched away by the hands of wicked men. And by the hands of wicked men they will be subjected to a man-centered education. No longer will we be able to tell them about Jehovah our covenant God and about His faithfulness and wondrous ways. That will all come to an end. And by the hands of wicked men the names of our children will be changed, changed from the name “covenant children of God” to the name “children of the devil.”

Do not do that. Do not take all of that for granted. And, most of all, do not take for granted our children, the covenant seed which God has given to us. Instruct them. Teach them. Fill them to overflowing with the knowledge of the Lord our God. Do that, for it is as Paul says in Romans 13:12, “The night is far spent, the day is at hand:” We live in the last time. But how are we living? 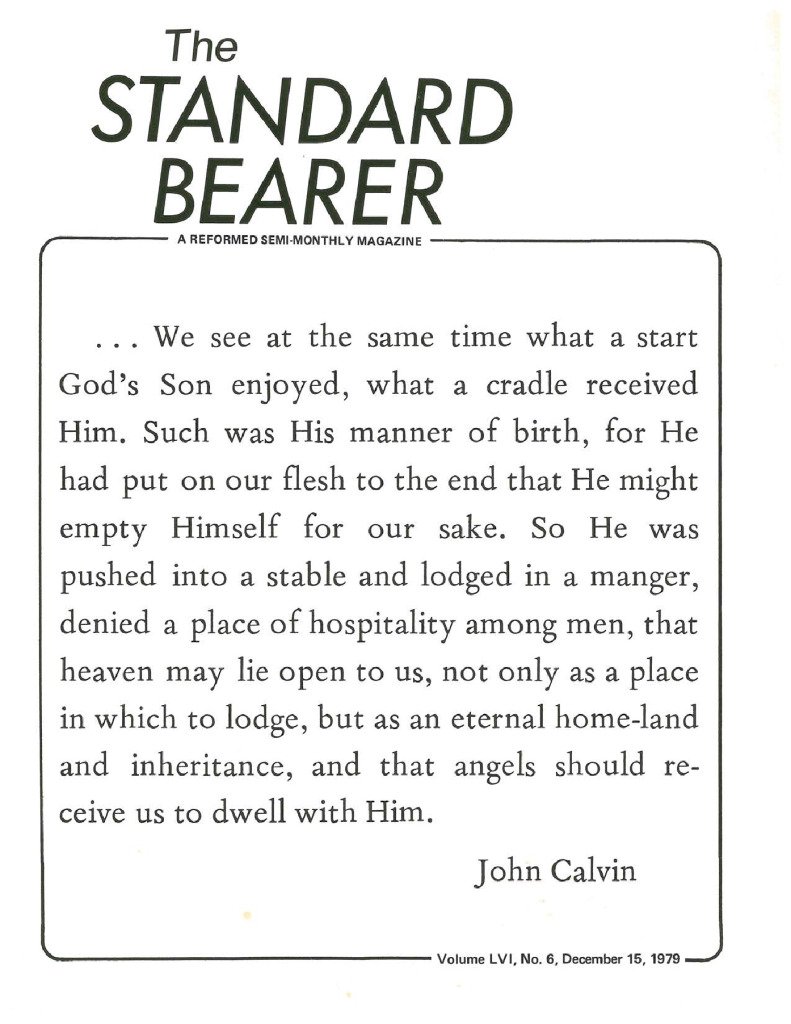