The King on the Cross

The King on the Cross

“And Pilate wrote a title, and put it on the cross. And the writing was, JESUS OF NAZARETH THE KING OF THE JEWS. This title then read many of the Jews: for the place where Jesus was crucified was nigh to the city: and it was written in Hebrew, and Greek, and Latin.”

And they took Jesus, and led Him away!

And He bearing His cross went forth into a place of a skull, which is called in the Hebrew Golgotha.

And Pilate wrote a title, and had it affixed to the cross, above the head of the central figure at the scene of the crucifixion, for with Him were two other crucified, on either side one, and Jesus in the midst.

Jesus, the Nazarene, the King of the Jews!

It was this title that the chief priests of the Jews rejected. They say: Write not, the King of the Jews; but that He said: I am the King of the Jews. In no sense did they wish to be associated with Jesus, as the title Pilate prescribed clearly indicated. More importantly, however, they objected to this title because they conceived of the disastrous effects this title might have on those of their own nation who were visiting Jerusalem during the feast days. These came from every part of the world and would be able to read the title, whether they were of Hebrew, Greek, or Latin background. Should they be converted to Christ through the reading of the sign, as evidently was the case with one of the malefactors, the cause of Christ could only be enhanced, not crushed, as the Jewish leaders had hoped. Moreover, should the title remain unchanged and be understood as it was written, it could only be interpreted to mean that the Jews were crucifying their king, and this would forever make them slaves of Rome. Though they had cried out in rage before Pilate during the trial of Jesus: We have no king but Caesar, they never meant it. They were looking for such a king, who would liberate them from the yoke of bondage.

Pilate, however, was of no mind to bow to their petition. His answer was: What I have written, I have written. This he said, not because he was unable to change the superscription. If Pilate had so desired he could easily have changed it, and for that matter, he could have ordered it taken down. Pilate, however, remained adamant. Whereas during the trial of Jesus he had given much evidence of weakness, allowing himself to be pushed around by the Jews, now that he had given sentence that Jesus should be crucified—while in his heart he was convinced that Jesus was innocent—he will take a stand, if for no other reason than to pester these hated Jews.

However, we ought to see that there was a deeper reason why he would not alter the title. God, Who had so overruled in the trial and conviction of Jesus, and according to Whose will that title should-appear in the three different universal languages, also had determined that the title should be written precisely as it was. Neither Pilate nor the chief priests, yea, no one, may change it.

The hated Nazarene is indeed the King!

O, true, He is not the earthly king of the Jewish people. Such a crown and such a people the Lord repeatedly had disclaimed during His earthly ministry. At the beginning of His ministry He had withstood the temptation of Satan to accept the kingdoms of the world for the mean pittance of bowing only one knee to the prince of darkness. And at the height of His earthly ministry, after He had performed the miracle of feeding the five thousand, He totally rejected the proposal of becoming the king of that nation which had sought Christ only for bread. Though the title might be construed by the readers as indicating that Jesus was to be identified with the nation of the Jews as their king, such was not the divine intention in the title. Just as the question of the Magi from the East must be understood as meaning: Where is He that is King born out of the nation of the Jews, and hence out of the royal line of David; so must the title be understood, according to the divine intention.

Moreover, the term Nazarene must also remain in the title. Out of Nazareth which never had a good reputation, God would present His King. Out of the land of darkness God would command His Light to shine, and that, too, with the usual two-fold effect: on the one hand, that those into whose hearts the Light has fallen may see in Him the light of their salvation, and their King come to deliver them from the power of darkness, sin, and death; on the other hand, that those who remain in darkness might only reject Him, and impose on Him all their reproaches. Indeed, the King on the cross, Who arose out of the darkness and obscurity of Nazareth, is God’s eternal King. From the everlasting decree He was appointed to rise to the throne of Zion. Of the Israel of God, according to the election of grace, the Nazarene is God’s appointed King. Through the awful reality of His cross would He furnish His throne and establish His dominion.

The King on the cross!

Instigated by the chief priests and elders. It appears that when Pilate refused to change the wording of the title, the leaders of the Jews were determined to destroy any possible good effect the title might have on the people, who, reading the superscription, might be converted to the cause of the Nazarene. While at first they apparently had no intention to attend the crucifixion because of the feast days, lest they should become polluted, and thus unable to serve in the religious services at Jerusalem; they now, in spite of any pollution that might fall on them, were determined to not only be in attendance at the cross, but especially with a view to mixing in among the people and arousing in them the spirit of hatred, and evoking from them the devilish mockery that followed. Hence, Matthew informs us: “And they that passed by reviled him, wagging their heads, and saying: Thou that destroyest the temple, and buildest it in three days, save thyself. If thou be the Son of God, come down from the cross.” In this connection notably we read: “Likewise also the chief priests mocking him, with the scribes and elders, said, He saved others; himself he cannot save. If he be the King of Israel, let him now come down from the cross, and we will believe him. He trusted in God; let him deliver him now, if he will have him: for he said, I am the Son of God.”

To know that He will die on the cross does not mitigate their devilish rage.

Before He yields up the ghost, they cast at Him their cruel mockery and evil sarcasm.

Never would they own, nor would they have the people believe that He had done good when He healed the sick, cleansed the lepers, gave sight to the blind and hearing to the deaf, and when He raised up the dead. The thought must be rooted out of the minds of all that He actually saved others. For if He was unable to save Himself, He had no power to save at all. He must be branded as an imposter.

Also the soldiers, coming to Him and offering Him vinegar, mocked Him, saying: If thou be the king of the Jews, save thyself!

In word and deed they deride Him; for to them also a king on a cross was pure folly. Their only conception of kingship was envisioned in one who sat on a throne, clothed in royal array, and holding in an iron fist the symbol of absolute dominion. An apparently impotent man, with perhaps no other garments than a tattered loin cloth, and whose hands and feet were nailed to a cross, militated against every human conception of kingship. And the language they speak is reminiscent of the very speech of the devil. “If thou be the Son of God,” was the repeated language of Satan in the temptation. And this is precisely the terminology the adversaries use before the King on the cross—If thou be the king of the Jews, save thyself.

Yet the truth of the title is factual, and the King on the cross is God’s anointed!

Though apparently the King is vanquished, yet paradoxically as it may seem—He is the King victorious!

Beholding Him only with the natural eye, and apart from the Word of God concerning Him, all that you see is helplessness and defeat. Beholding Him thus, you see neither form nor glory, but a bruised and crushed, emaciated and ghastly figure of a man, hanging helplessly on a cross. None is there who will deliver Him. No armies, no power of the sword to respond to His command. Rather, He appears accursed of God and of men. Lifted up from the earth, as not worthy to stand in the company of men; but also, as it were, abandoned of God, and allowed to suffer the torments of hell. Apart from the Scriptures, that divine revelation concerning Him, and beholding Him only with the eyes of our flesh, all you can see in Him is utter defeat. There is nothing that could ever make you believe that He is the Redeemer and Deliverer of His people. Small wonder, then, that the world of the wicked mock and deride Him!

But thanks be unto God!

We know better of Him!

With the light of infallible revelation shining upon Him, and with eyes of faith, given to us of pure grace, we are able to penetrate with our vision through the veil of His flesh and behold in Him the God of our salvation, the King in His glory, battling all the powers of sin and death and overcoming them, while He pays the penalty of our guilt in our stead. In each groan and twinge of pain, He drinks more deeply of the cup of the wrath of God which is poured out over our guilt which He assumed. Unto the last drop of blood that poured from His veins, He satisfies completely the justice of God, and merits for us the sentence of righteousness.

Making even His enemies to be His servants, and using their service to lay the very foundations of His kingdom, against which the very gates of hell shall never prevail.

Out of the wild and frenzied cries of the mocking rabble shall the plaintive prayer arise from the lips of one of His penitent subjects—Lord, remember me when thou comest into thy kingdom. One there was who by grace was able to read that little Bible above His head, and see in Him the King eternal.

And His soul shall be satisfied that—not the host of darkness has prevailed—but He through His cross has established forever His kingdom that shall have no end. 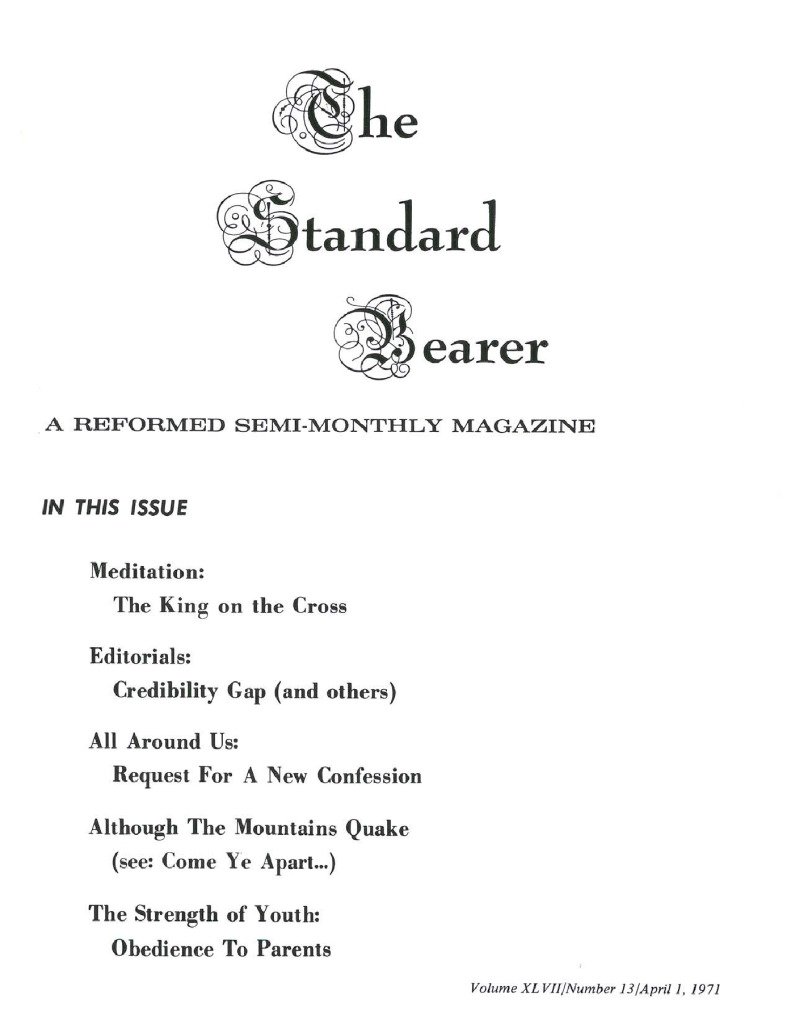