Have you ever read one of those magazine stories in serial form with short installments appearing each month? Then you will also remember wondering how many chapters were still forthcoming. In fact, some single chapters were strung out so long that one even wondered when he would be introduced to a new chapter. Well, the story of our work in the Jamaican Mission Field is one such, with parts of chapters written in installments. This time we will start another chapter. Start, I say, because you will have to wait for another installment to see the end, probably written by Synod of 1974.

For the preceding chapters we refer you to the back numbers of the Standard Bearer, the first installment written back in 1963, or thereabouts. You will remember that emissaries had been sent there two by two. The Reverends Hanko, Harbach, Heys, Lubbers and the brethren Meulenberg, Feenstra and Zwak came and went as mandated by the Mission Committee. And, in an exciting installment, you learned that Rev. Lubbers accepted the call to be Missionary to the Island! That was in 1970. Those two stalwart souls, Rev. and Mrs. Lubbers, labored diligently in that new field; preaching, teaching, exhorting, leading, and not least, distributing clothing sent from the States. That was Mrs. Lubbers’ domain, plus accompanying her husband up those steep hills to locate the well-hidden churches.

We have now begun a new chapter, one which will be “continued in the next issue” of course. This chapter began with the 1973 Synod, and will have to be finished by the Synod of ’74. But as in the case of the magazine serials we never knew if that chapter would be the last, so again. We cannot look so far into the future of this story. The ’73 Synod decided, with Rev. Lubbers’ consent, to send our Missionary back to the Island for another year. The faithful two went back, but this time they had company. Candidate Hoeksema and his wife, Ruth, were requested by the Mission Committee to assist the Lubbers duo. The first few letters winging their way back to the Committee were somewhat more encouraging than those which came before the Synod meeting. But soon the tenor of the missives changed. The six-letter word, futile, cropped up very often. Finally, Rev. Lubbers wrote to ask the committee to terminate his labors, preferably in December of ’73. Weighing all the facts as reported by Rev. Lubbers, and corroborated by his youthful assistant, the Mission Committee, in conjunction with the calling church, made its combined decisions: to notify our Missionary that we were suspending his work in December; to move all his possessions back home; and, await the evaluation of that mission field by the 1974 Synod! The Missionary’s reply was prompt! We had made him very happy because he felt that his work there was finished, and that therefore his presence was no longer required.

Well may he hear, “Well done, thou good and faithful servant, enter thou into the joy of thy Lord.” Rev. Lubbers had accomplished much. He had also experienced many sorrows, such as seeing ministers and their flocks leaving our communion; and meeting furtive, secretive opposition, and some quite open! But his accomplishments also bore much fruit. He had faithfully instructed the people in the Reformed Faith and seen many cleave to this truth. But his monumental work was the Seminary which he set up for the instruction of four young aspirants for the ministry! He was the entire teaching staff! If we allow you to “peek” into a future installment, you can see that those four will graduate in November. Candidate Hoeksema was added to the Staff in July and helped the students cram through the courses expected of them. The Mission Committee co-operated with the Staff in sending some fifty dollars worth of books for each student as a graduation present.

No, we are not leaving the faithful people in Jamaica in the lurch. The Mission Committee has decided to send two of their most experienced emissaries to the Island in the Spring to evaluate the field, to learn what effect our temporary absence has had upon them; and to provide guidance to the Committee and to Synod, so that Synod can make its own evaluation.

(Continued in the next installment.) 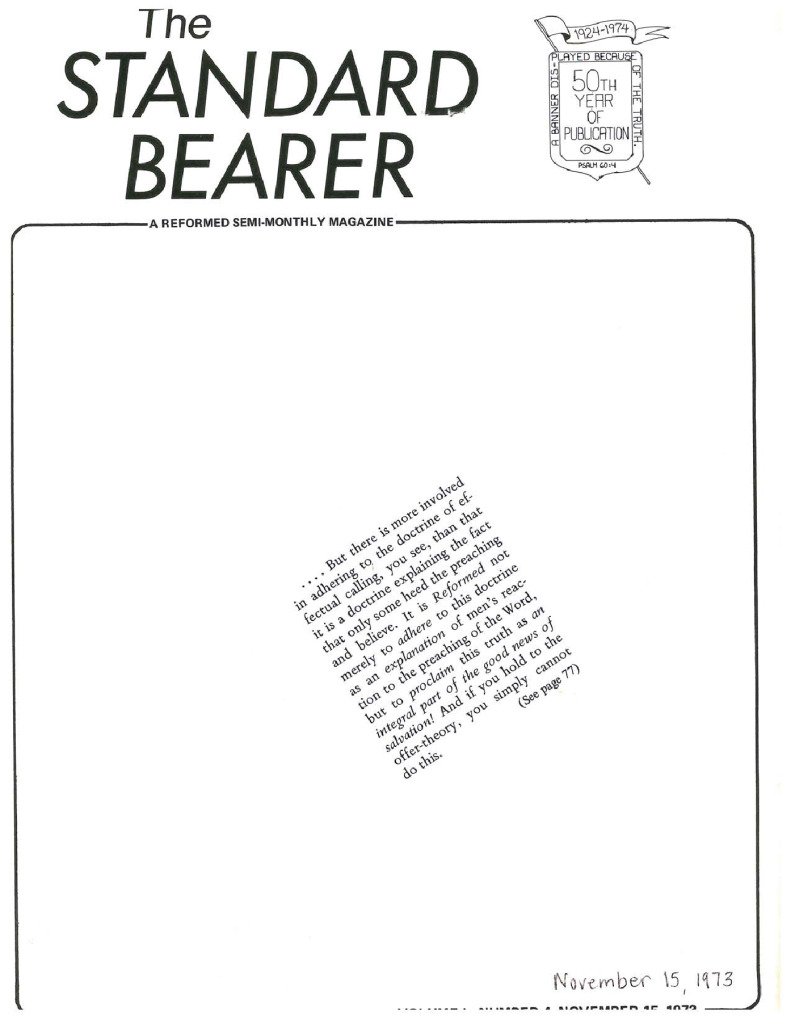