The Institute and Its Importance

The Institute and Its Importance

It seems sad that the church, at least in its institute form, should be so universally despised, as it is today, even by those who are members of it. For us as members, that is very much like biting the hand that feeds us. Nevertheless, the blame for such an attitude must not be laid completely to the charge of those who act and speak so disdainfully toward the church or churches of which they are members. There certainly is, in that respect, an overriding need for instruction regarding the church and membership in it. Yet it is easy to be sympathetic with those whose attitude toward the church arises out of severe disappointment. To use the figure once again, the fault is often with the hand that feeds. It is not surprising that many church members are disillusioned with the church institute when all they have ever received from it are a few scraps of theological garbage.

But all that does not change the fact that such an attitude is very wrong and that a situation as we have described is absolutely intolerable in the church of our Lord Jesus. How can the church do her work when she is not only despised by the world but by her own members, and how can the members of the church be faithful and fruitful in their calling when they cannot co-operate with the very church in which God has given them a place? In so far as such a situation affects every one of us, let it be our prayer that God will use these words to remind us of the place of importance that the church institute ought to have in our lives, that we may seek to return to our first love for the church of our Redeemer.

Though our Reformed fathers do not agree with the Romish idea of the church institute, they do speak very strongly of its prominent place in the lives of Christians. Our own Belgic Confession says:

Since this holy congregation is an assembly of those who are saved, and that out of it there is no salvation, that no person of whatsoever state or condition he may be, ought to withdraw himself, to live in a separate state from it; but that all men are in duty bound to join and unite themselves with it; maintaining the unity of the Church; submitting themselves to the doctrine and discipline thereof; bowing their necks under the yoke of Jesus Christ; and as mutual members of the same body, serving to the edification of the brethren, according to the talents God has given them. (Article XXVIII).

Nor is this emphasis confined to our Dutch Reformed tradition. It is found just as clearly in the Westminster Confession of Faith:

The visible Church, which is also catholic or universal under the Gospel . . . consists of all those throughout the world that profess the true religion; and of their children: and is the Kingdom of the Lord Jesus Christ, the house and family of God, out of which there is no ordinary possibility of salvation. (XXV, ii).

It is from the same viewpoint that Calvin compares the church institute to a school which our weakness does not allow us to leave until we have spent our whole life as scholars (Institutes, IV, 1, iv). In the same place he calls it the mother of believers through which we enter life, are nourished and governed until we become like the angels.

When we speak of the church as organism, then we are really talking about what Scripture calls the body of Christ as that is gathered out of all nations and throughout all history and united to Christ by a living bond of faith. The word organism implies that this church is spiritually alive in Christ, in that the rich and glorious life of Christ flows down from Christ as head in the Church which is His body.

A working definition of the institute would be, then, “the assembly of those who through the external Word, the use of the sacraments and Church discipline, are joined together into one external body or society” (Leiden Synopsis, XL, 32; quoted from the Reformed Dogmatics of Heinrich Heppe).

There are many Scripture passages which speak either directly or indirectly of such an institute form of the church of Christ. There are those passages such as Acts 5:11, Romans 16:4, I Corinthians 11:16, 16:1, and Galatians 1:2which speak of specific congregations or groups of congregations as churches. Then there are passages which make it clear that these gatherings involve a formal assembly and fellowship of those who make profession of faith in Christ (Acts 2:42, 11:26, I Corinthians 11:17, 18, and Hebrews 10:24, 25). Most important of all, however, are those passages which show us that it is the offices especially which give form and shape to the institute (Matthew 18:17, Acts 4:23, and Ephesians 4:11-13). It is the church as institute, therefore, which through its offices worships, exercises discipline, administers the sacraments, and preaches the Gospel.

The fact that the institute has a certain form or shape is connected exactly with the fact that it is a manifestation of the organism of Christ’s body. Even as there is perfect order and harmony in the spiritual body of Christ of which every believer is a member, so also the fellowship of saints on earth ought to reflect that order and harmony. That is the point that Paul is making in I Corinthians 14:40 when he demands that everything be done decently and in good order in the church.

This orderly form is necessary in order that the church on earth may realize her calling to be a light shining in the darkness of this world. The institute implies that particular arrangement of gifts, powers, offices, and services through which the church can respond to its calling in an orderly way. From that angle we can also see the importance of the offices in the institute. The church is a congregation of believers, and the calling of the church is the calling of believers in their office of believer. When believers come together to do their calling then they do that through the offices of pastor, elder, and deacon which Christ has instituted. Thus it is that offices, as they give the institute its particular shape and form, are not separate from the office of all believers, but the means which the King of the church has given through which the believer may realize his calling as God’s prophet, priest, and king in a decent, orderly way.

That is why the matter of church reformation is always so very serious in the church institute. When the church institute has so declined that the believer can no longer exercise his responsibility through the offices in a meaningful way, then it is high time that the institute be re-formed or that the believer seek reformation by joining himself to a church fellowship in which he is able to perform the duties of his Christian calling in the way that God has appointed for him to do that, that is, through the church and in the church.

The matter of the offices also leads us directly to the importance of the institute itself. Those offices are essentially the offices of Christ, our chief Prophet, our only High Priest, and our eternal King. It is through His offices as they are reflected in the church that His saving power is revealed. That power is the power to teach, first of all—to teach the knowledge of the one true God, which knowledge, as John says (John 17:3), is the very essence of eternal life. It is, also the powder to rule the conduct of the people of God with the perfect law of liberty and to defend the Kingdom of God against the assaults of the powers of darkness. And it is the power to make known the everlasting and free mercy of Jesus Christ in the care of those who are needy. And it is exactly in order that these things may be done in an orderly fashion, and in order that Christ Himself in His offices may be present with the church that He has given the church its institute form and its offices as part of that form.

That is, therefore, the reason why we as Reformed churches have always stressed membership in the visible church. The institute is a necessary part of the believer’s life as the way in which he is savingly joined to Christ. He simply cannot function in an orderly and effective way in the office of believer apart from the institute. Membership in the institute is not voluntary in the sense that a man may feel free to join or not join himself to it as he sees fit. The word of God to anyone who confesses faith in Jesus Christ is, “forsake not the assembling of yourselves together, as the manner of some is” (Hebrews 10:25). One who cuts himself off from the institute cuts himself off from the living organism of the body of Jesus Christ and from the saving power of His offices.

Our confessions are not wrong when they say that apart from the visible church there is no hope of salvation. Acts 2:47 makes it very clear that the church on earth is manifest as a visible society of the people of God, and that salvation involves membership in that church: “the Lord added to the church daily those whom He had ordained to eternal life.” Just as my arm or my hand cannot live apart from my body, so the members of Christ wither and die spiritually when they cut themselves off from the fellowship of His body in the visible church.

It is sometimes asked if one can be saved without being a member of the church, and there are those who answer, “Yes,” and who even say of themselves, “I am a member of the Church and do not need to be a member of any particular church or congregation.” That answer is very wrong; but so is the question, because it is too abstract. The question is not of what God can do, but of what He does do, and then also a question of my responsibility with respect to what He does do. What He does do is unmistakably clear fromActs 2:47; and then my responsibility is also unmistakable: “those who separate themselves from the same, or do not join themselves to it, act contrary to the ordinance of God” (Belgic Confession, Article XXVIII).

By joining ourselves to the institute church we “come unto mount Sion, and to the city of the living God, the heavenly Jerusalem, and to an innumerable company of angels, to the general assembly and church of the firstborn, which are written in heaven, and to God the Judge of all, and to the spirits of just men made perfect, and to Jesus the mediator of the new covenant, and to the blood of sprinkling, that speaketh better things than that of Abel” (Hebrews 12:22-24). 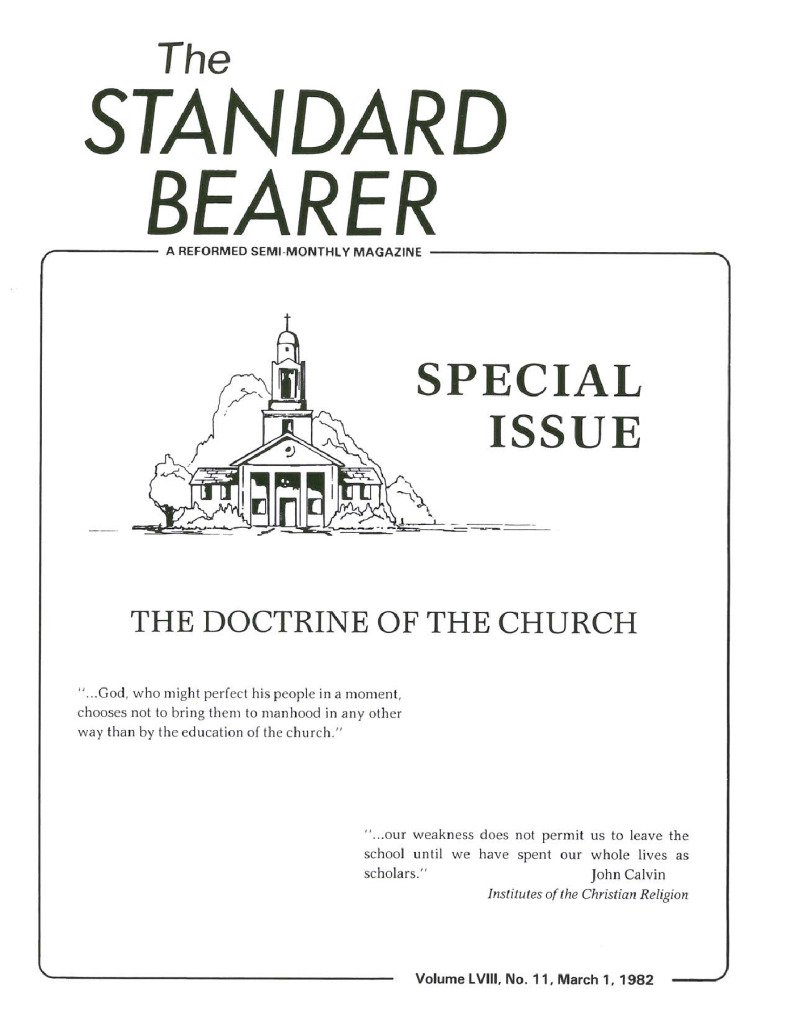