There is also the danger of dividing the natures, so that in Jesus are two different individuals. This brings us to a consideration of the union of the natures in one Person. The Church faced the danger of dividing the natures of Christ so as to posit two different individuals in Jesus. She confronted this in the teaching of Nestorius. We need not burden ourselves now with an examination of all the fascinating aspects of the controversy with Nestorius, particularly the intrusion into the controversy of the developing devotion to Mary in the description of her as “mother of God,” which became the watchword of the orthodox party and, indeed, was used by the Symbol of Chalcedon. Nestorious pressed the Church to do justice to the oneness of Christ and the union of the natures.

This was also at issue in the doctrine of Apollinaris (who, you will remember, held that the Word replaces the human spirit, or “reasonable soul,” in Jesus). His concern was to establish a union of the natures, an intimate union. Against Nestorius, Chalcedon said, “indivisibly, inseparably,” and went on to say, “not parted or divided into two persons, but one and the same Son, and only begotten, God the Word, the Lord Jesus Christ.”

Jesus is one Person. By a “person,” I understand the ego, the “I,” the self-conscious and self-asserting subject of all one’s action (another term is “subsistence” — that which stands under; the Greek word is hypostasis). Jesus’ Person is the Divine Person of the eternal Word. The Word became flesh (John 1:14); the Son was made of a woman (Galatians 4:4). The “I” of the Word-become-flesh is the “I” of the eternal Word; the “I” of the Son-made-of-a-woman is the “I” of the eternal Son. Christ expressed this in His words, so offensive to the Jews, in John 8:58: “Verily, verily, I say unto you, Before Abraham was, I am.” This makes all of the words and deeds of Jesus so weighty, so infinitely weighty: that which ‘stands under’ them is God.

In itself, it (the flesh of

— D.E.) is impersonal — that which hath not a subsistence of its own, which should give it individuation and distinction from the same nature in any other person. But it hath its subsistence in the person of the Son, which thereby is its own.

The union thus established is a permanent union. It remains after the resurrection and ascension. According to the Reformed creed, the two natures of Christ “were not separated even by his death . . . the divine nature always remained united with the human, even when he lay in the grave” (Belgic Confession, Article XIX). This is a reason why the body of Christ did not see corruption in the grave.

By this personal union of the natures, the Christ is one Christ, not two Christs. All that the creed is expressing is the perfectly plain fact of all Scripture, that Jesus is not two individuals, but one individual.

Also, there is living communion of the two natures. This is not the same as confusion, or mixture. But there is such a relationship between the two natures that the Divine can sustain the human nature as it suffers the punishment of the infinite wrath of God against sin and can give infinite value to those sufferings, since they are the sufferings of God the Son; and the human nature can be the seat in which the Divine nature sustains the burden of the wrath of God.

Because of this personal union, the properties of both natures are ascribed to the one Person of Jesus. Jesus says, “Before Abraham was, I am,” thus claiming eternality — a perfection of the Divine nature. But the same Jesus says, I thirst; I am weary; I do not know the hour of the end; My Father is greater than I — thus acknowledging the frailties and limitations of His human nature.

In truth, the Word became flesh!

This wonder took place by means of the Virgin Birth, to which belongs conception by the Holy Spirit. The Virgin Birth was not only the sign of the invisible miracle of incarnation, but it was also the necessary means by which the incarnation occurred. Man’s act must be excluded, so that God may act. Only in the way of the Virgin Birth is the Child God and man. If Jesus is begotten by a man, as well as born of a woman, He is a human person; and He is flesh only. On the other hand, if He is not born of a woman, He is at best merely the appearance of a man.

Conception by the Spirit also safeguards the flesh of Jesus from the defilement of original sin. By this work of the Spirit, Jesus is both “Son of God” and a “holy thing” (Luke 1:35).

Concerning the manner in which the Word became flesh, Scripture says, “The Holy Ghost shall come upon thee, and the power of the Highest shall overshadow thee: therefore also that holy thing which shall be born of thee shall be called the Son of God” (Luke 1:35).

The necessity of the incarnation was expressed, by the Nicaeno-Constantinopolitan Creed in these words : “who, for us men and for our salvation, came down from heaven.”

In his Cur Deus Homo, Anselm put it thus:

…for what cause or necessity, in sooth, God became man (Book First, Chapter 1).

The answer is given is Book Second, Chapter XVIII (b): The restoring of mankind ought not to take place, and could not, without man paid the debt which he owed God for his sin. And this debt was so great that, while none but man must solve the debt, none but God was able to do it; so that he who does it must be both God and man. And hence arises a necessity that God should take man into unity with his own person; so that he who in his own nature was bound to pay the debt, but could not, might be able to do it in the person of God.

The death that shall be the death of death must be the death of the Son of God in our flesh; the blood that shall purchase the Church from sin must be God’s own blood (Acts 20:28). The incarnation was also necessary for the renewal of the redeemed unto eternal and holy life. Only God can quicken, and only God can break sin’s power. But only one who shares our nature can impart His own life to us. It is necessary, for a holy life, that the redeemed be conscious of the incarnation. The impelling motive of a holy life is thankful love — thankfulness for the incarnation. “In this was manifested the love of God toward us, because that God sent his only begotten Son into the world . . . to be the propitiation for our sins” (I John 4:9-10). Consciousness of this motivates us to love God and to love each other.

And all of the Christian’s life and labor in this world is permeated with the sense of wonder and awe that he is the friend, the disciple, and the member of God Incarnate.

Salvation is friendship with God. In Christ Jesus, God dwells with His people in friendship — the covenant — because of the incarnation.

We must believe rightly the incarnation of the Lord Jesus. For this faith, we must be born again, not of blood, nor of the will of the flesh, nor of the will of man, but of God; so that we rightly and thoroughly know the misery of the guilt of our sins, our need of pardon by the righteousness of God in Christ’s cross, and God’s utterly gracious provision for our need in His own Son. Then, we believe in Jesus the Christ, as the Word become flesh for us poor sinners; and believing, we have eternal life in His Name. 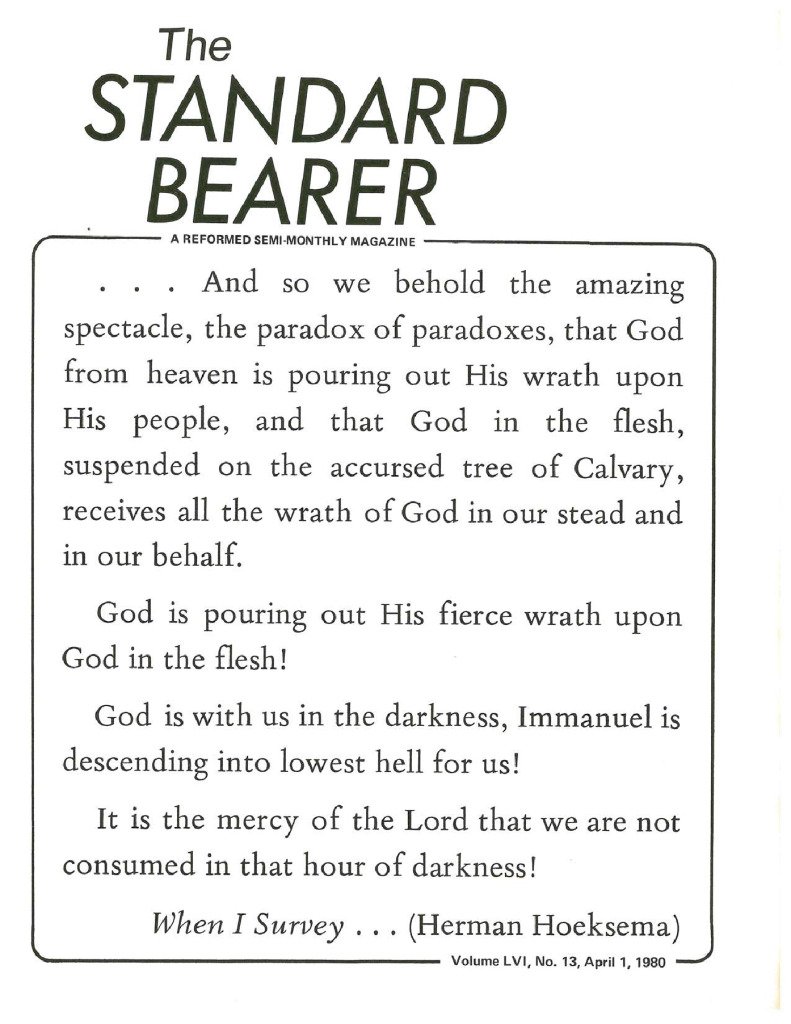