The High Calling of Husbands to Love Their Wives (2)

The High Calling of Husbands to Love Their Wives (2)

Important for the demonstration of love for one’s wife is the fact that the husband honors his wife as the weaker vessel. See I Peter 2:7. The husband must control his own sinful nature and the temptation to use his superior strength to crush her not only physically but in her spirit. The husband must not be guilty of demeaning behavior and harsh, insensitive, and cruel criticism of his wife. He must not use fear tactics to intimidate her. He must not treat his wife as though she is nothing more than his slave in the home, ready to serve his every demand. The love of the husband is revealed by the honor and appreciation he shows her in daily life. In love, the husband must support his wife with his God-given strength, not only physically but also emotionally, psychologically, and, above all, spiritually. She depends on him, and he must not despise her weaknesses and need.

The husband must show his love for his wife by truly living in fellowship with her. He must share with her his own joys and sorrows, his own successes and failures, the interests of his life, and the great concerns of his life. The husband may not keep a large part of his life secret from his wife. He must share with her the most intimate secrets of his life, talking to her about things that he often would not talk about with anyone else. He seeks her advice and input and encouragement for his own life.

In most ordinary situations in marriage, the husband must go out every day to accomplish his earthly occupation. He is therefore away from his wife for long periods of time every day. He considers this a matter of necessity, not of escape. When a husband orders his life for the carrying out of his daily occupation, he must always take his wife into consideration. He certainly does not use the times away from his wife to cultivate interest and excitement in relationships with other women that may lead him into secret extra-marital affairs, which are so common in our modern-day evil world. When the husband is away from his wife, she must be able to trust him. She must be kept fully informed of his schedule of activities.

The calling of the husband to dwell with his wife means that he takes great interest in the daily events that take place in her life as well. When he comes home at the end of the day, he wants to hear about the struggles and hardships she faced in her household duties, the care of the family, the maintaining of the household finances, and maintaining of order and discipline of the family. He realizes that the care of the family is a joint venture. The husband must be the head of his family as well, and he needs from day to day the help and support of his wife.

The role of the wife in the home usually limits her social life and opportunities for companionship and fellowship with others. This is especially true when there are numerous children that must be cared for and watched day and night by the wife. The husband who loves his wife is sympathetic to this. He realizes that he must provide the friendship and social life that his wife deeply needs. He also realizes that she has need for fellowship with others outside of the home, and he tries to give her the opportunity for this by being ready sometimes to take over the watching of the home and the special care of the children. He is not wrongly jealous and overly demanding so that his wife never has time for social life outside of the home.

There are several obvious patterns of behavior on the part of the husband in relationship to his wife that will be the cause of bitterness. The first one is when the husband treats his wife in a demeaning way. He treats her as though she is a creature of lower dignity than himself, failing to appreciate the truth that she was in fact created in the image God. The husband breeds bitterness in his wife when he exalts himself in pride over her, demeaning her by harping criticism and harshness, treating her with contempt, and sometimes even mocking her before others. Such behavior will cause the heart of his wife to wither within her, and will make her calling to submit to him and serve him grievous.

A second reason for much bitterness in marriage is when the husband neglects his wife. He does not dwell with her in friendship and companionship. He shows in the course of daily life that he would rather spend his time with others or with selfish pursuits in life than with his wife. He sometimes even treats other women with whom he interacts in the course of daily life with greater deference and excitement than he does his own wife. The husband deeply hurts his relationship with his wife and gives her cause for bitterness when in his behavior he acts as though other women are more desirable or attractive to him than his God-given wife.

A third reason for bitterness by the wife towards her husband is when he is overbearing and unreasonable in his demands and in the way that he exercises authority over her.

One of the greatest occasions for bitterness in his wife is when he lives carelessly and foolishly and he does not show himself worthy of her respect and honor. The husband who is lazy and careless and irresponsible in his daily occupation and does not care for and provide for his wife makes it very difficult for his wife to honor him. According to the Word of God, such a man is worse than an infidel. The husband must be a strong spiritual leader and protector of his wife and family. A husband who is himself spiritually negligent, irresponsible, ungodly, and scandalous in his behavior not only brings shame on himself but hurts his wife andfamily as well. The husband must be self-sacrificing, self-denying, and noble in the care of his wife and family. The husband’s godly behavior must inspire the respect and confidence and love of his wife and family.

The ideal for the whole calling of the husband to love his God-given wife is the Lord’s own amazing example for His blood-bought church. “Husbands, love your wives, even as Christ also loved the church, and gave himself for it.” The love of Christ for the church involved an immense sacrifice for her on His part. The husband must be willing also to give himself for the happiness and well-being and protection of his wife.

This is a high calling. It is a calling that involves great devotion and self sacrifice. It is a calling that is impossible to fulfill without the grace and Spirit of Christ in the heart of man. The best husband falls far short of this calling, sometimes even grievously. When the husband has allowed a sinful pattern of behavior to hurt and even ruin his relationship with his wife, he must repent before God and at the cross of Jesus Christ. He must confess his own sin to his wife and sincerely ask for her forgiveness. Renewal of love, true love, in marriage can come only from the power and Spirit of Christ. In the love of Christ the husband must seek the highest good of his wife and lead her in sanctification and obedience to the common Lord and Savior who rules over and cares for both husband and wife.

The love of Christ for His church caused Him to give Himself for her to sanctify and cleanse her and to prepare to present her to Himself as a glorious church. The husband cannot save his wife. He cannot sanctify and cleanse her as the Lord does His church. Only the Lord can save her. But the husband is called in the love of Christ to be the instrument and servant of the Lord for his wife for this high purpose and end.

Both husband and wife are to serve each other for the purer and better life that is to come, the heavenly life. Both parties in marriage must seek to influence each other, to improve each other, to be a sanctifying influence on each other. Together the Christian husband and wife, by the grace of God, must prepare each other for a better life to come. In heaven we will experience the blessed reality of the marriage of Christ and His church. Our earthly marriages can never be more than a very imperfect reflection of that blessed reality. 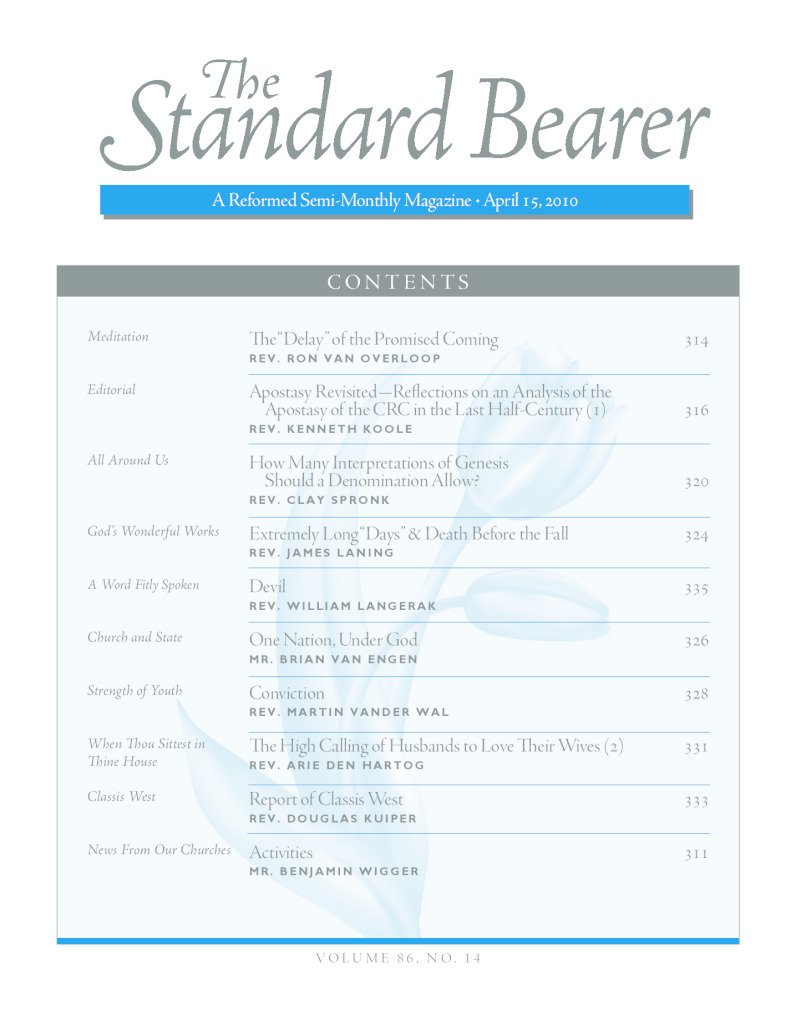