The Hexaemeron or Creation-Week (3): The Second and Third Day

The Hexaemeron or Creation-Week (3): The Second and Third Day

The word, firmament, is derived from a word which means: to thin, stretch out, in the Holland: uitdunnen, uitslaan, spannen door uit te rekken. How the Lord created this firmament we are not told specifically. However, it is surely not impossible that the Lord formed this firmament by stretching, thinning out the waters which are above and the waters which are below so that they constitute this firmament. This interpretation we would base upon the following considerations. First, the literal meaning of the word, firmament, itself would suggest this interpretation. The word means literally: to thin, to stretch out. Secondly, modern science tells us that the firmament, that wonderfully blue ocean above us, indeed consists of a very fine, delicate matter, so that the blue sky is nothing else than a wide and deep ocean of ether-matter. The entire universe is filled with this delicate matter, this ether, so that nowhere a vacuum exists. Thirdly, this also appears to be the presentation of Holy Writ, namely, that God created the firmament by thinning out the waters, so that the waters above and the waters below are now separated by this firmament, this blue ocean of ether. We have already called attention to the literal meaning of the word, firmament, which means: to thin, stretch out. Besides, that Scripture does not conceive of the earth as merely a flat surface with a roof overhead, so that one, coming to the edge of it, would be in danger of falling off this earth (thus people conceived of the earth ages ago, so that also from this viewpoint Columbus’ dauntless venture to cross the ocean must be considered a marvelous experiment especially in the light of the prevailing conception of his time) is clear, for example, from a passage such as Isaiah 40:22: “It is He that sitteth upon the circle of the earth and the inhabitants thereof are as grasshoppers; that stretcheth out the heavens as a curtain, and spreadeth them out as a tent to dwell in.” We should note, in this connection, that the prophet in this text speaks of the “circle of the earth.” And in Job 37:18 and Ps. 104:2 we read: “Hast thou with Him spread out the sky, which is strong, and as a molten looking glass? …. Who coverest Thyself with light as with a garment: Who stretchest out the heavens like a curtain.” Job 37:18 can be read literally as follows: “Hast thou with Him spread out the sky unto a very fine matter, material?” And the second part of this text speaks of the sky as a molten looking glass. In Ps. 104:2 we should note that the psalmist, as does also the prophet, Isaiah, speaks of the heavens as being stretched out like a curtain.

Finally, in this firmament the heavenly bodies move about. That the earth moves about the sun is therefore not to be attributed to the sun’s magnetism or power of attraction, but simply to the tension or power, if you will, of the firmament to hold these various bodies in their respective places. Hence, what is true of the relation wherein the earth stands to the sun also applies to the relation of the various bodies to one another in this tremendous space of the universe. Nowhere does a vacuum exist. In this tremendous space the firmament holds all the bodies in their places. We believe that this is the presentation of Holy Writ. We read in Rev. 6:14: “And the heaven departed as a scroll when it is rolled together; and every mountain and island were moved out of their places.” When the heaven, this firmament, shall depart, be rolled up, disappear as a scroll, the stars of the heavens shall fall upon the earth and all things will be torn loose out of their places. This is also the presentation in 2 Peter 3:7-10: “But the heavens and the earth, which are now, by the same word are kept in store, reserved unto fire against the day of judgment and perdition of ungodly men. But, beloved, be not ignorant of this one thing, that one day is with the Lord as a thousand years, and a thousand years as one day. The Lord is not slack concerning His promise as some men count slackness; but is longsuffering to us- ward, not willing that any should perish, but that all should come to repentance. But the day of the Lord will come as a thief in the night; in the which the heavens shall pass away with a great noise, and the elements shall melt with fervent heat, the earth also and the works that are therein shall be burned up.” Also here we read that the heavens will be rolled up as a scroll. All things will collapse. Then the heavens will pass away with a great, a tremendous noise, and all the elements shall melt with fervent heat, the earth also, and the works that are therein shall be burned up.

We read in this passage: “And God said, Let the waters under the heaven be gathered together unto one place, and let the dry land appear: and it was so. And God called the dry land Earth; and the gathering together of the waters called He seas: and God saw that it was good. And God said, Let the earth bring forth grass, the herb yielding seed, and the fruit tree yielding fruit after his kind, whose seed is in itself, upon the earth: and it was so. And the earth brought forth grass, and herb yielding seed after his kind, and the tree yielding fruit, whose seed was in itself, after his kind: and God saw that it was good. And the evening and the morning were the third day.”

We may note at the very outset that God’s creative act upon this third day of creation-week consists of two parts: the creating of the dry land and the forming of the plant world.

God’s creation of the dry land.

Secondly, we may also conclude that the dry land which the Lord created upon this third day was limited and did not embrace all the present continents, such as North and South America, Europe, Asia, etc. The world as it exists today differs from the world as it existed before the flood and as it was called into existence by the Lord’s word of almighty and irresistible power. This observation we would base upon the following grounds. First, we believe that Scripture gives us this presentation in Genesis 1. The divine narrative informs us that all the waters were gathered together into one place, and that the dry land appeared. From this we would conclude that there was no division of oceans and seas but that all the waters constituted one gigantic sea. And when we read that out of and in the midst of that one gigantic sea the dry land appeared, we receive the impression that there was but one dry land, but one continent, and that this one continent was limited in size.

Secondly, continuing with our grounds for our observation that the original earth was limited in size and did not embrace all the present continents, we would remark that before the flood there was no need for several continents such as exist in our present day. Today seven continents are inhabited by the peoples and animals of the earth. Before the flood the world’s population was limited and certainly did not need these several parts of the world. 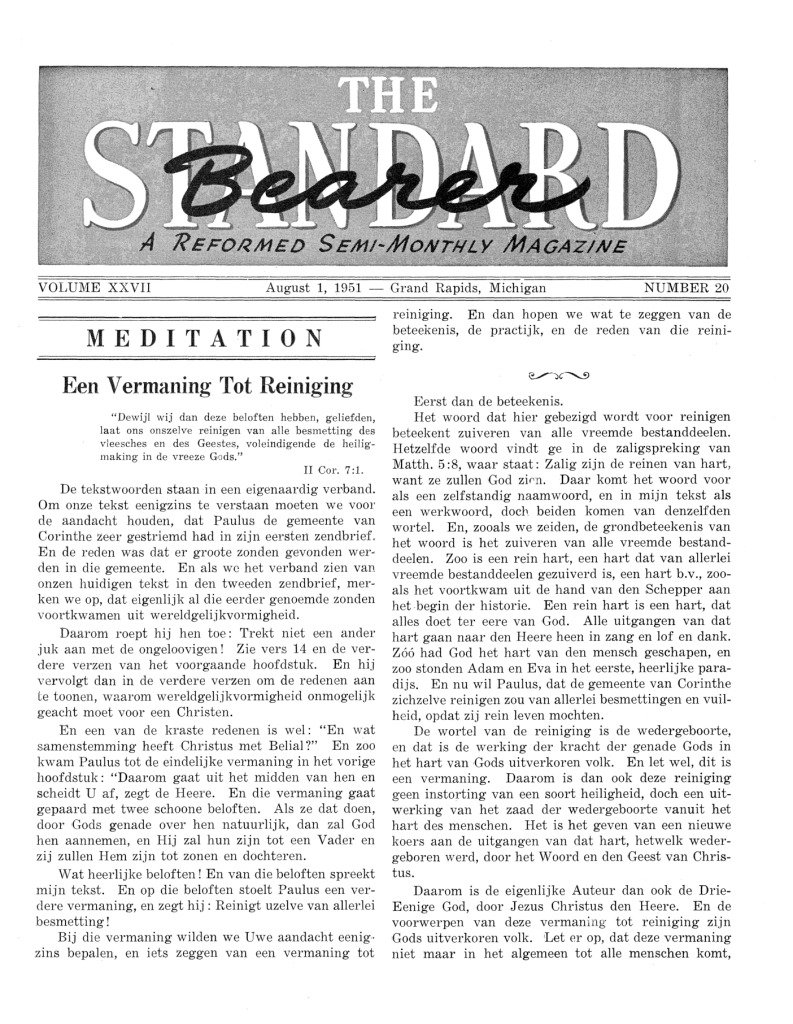