Great is the mystery of godliness. The Christian lives by the revelation of the “mysteries” of God, the mysteries of his will in Christ Jesus. And mystery, according to the Bible, is not that which is shrouded in darkness by human cults and superstitions, but refers to the plan of God in salvation, the secret counsel of our redemption, which Christ came to reveal to us as the chief prophet. Wherefore we intentionally write above this little exposition the “mystery” of Christ’s knowledge of his sheep. The knowledge which Christ has of his own, and which his own have of him, we only know because it is revealed to us! And we understand these mysteries by a faith which is the gift of God. Wherefore the Scriptures speak of the mystery of faith.

Jesus unfolds for us the mystery of what is implied in his being the good shepherd. Although he had spoken of his being the good shepherd in the former verses he nonetheless speaks of this once more here in the verses 14, 15. This is no more repetition; it is rather a picking up of the chief subject once more to tell us some more of the implication of this Divine mystery of redemption. The subject deepens as it progresses in the mouth of Jesus. In our verses we see the very heart of what constitutes Christ as being the good shepherd, and, incidentally, we also see why all others who came before him must be either hirelings or thieves and robbers by comparison.

It should be carefully noticed that the reasoning here is Theological and Christological. The reasoning is from the relationship of God to Christ, and the relationship of Christ to the sheep! This thought is, sad to say, somewhat lost in the King James Version. Thecomparison between the Theological and between the Christological is not stated. The translation in the KJV makes of “As the Father knoweth me” an independent sentence, a new sentence, while in the Greek it is quite evident that the translation should read “I am the good shepherd, and I know the mine, and the mine know me,even as (kathoos) the Father knows me and I know the Father.” In other words the KJV does not allow for the comparison between the Father’s knowledge of the Shepherd and the Shepherd’s knowledge of the sheep, nor for the comparison of the Shepherd’s knowledge of the Father and the knowledge which the sheep have of the Shepherd. That element of the comparison is lost in the KJV translation. Nevertheless such a comparison is clearly taught by Christ in the text. It constitutes the very heart of the “mystery” earlier referred to by us!

Concerning the good shepherd’s position to the Father it should be noticed, that, in that relationship, he is also standing in a unique relationship to his own sheep, the church of his choosing. Christ knows both the Father and the sheep. But Christ is known by the Father and also known by the sheep. Only the knowledge which God has of the Shepherd and the knowledge which the sheep have of the Shepherd are not on the same level. God’s knowledge is first and is original with God. Our knowledge is derivative and is a gift of the grace of God.

Such is the mystery which Christ here unfolds concerning the good shepherd. Only such a Shepherd, who is known of God and who knows God on that higher level, is able to know the sheep and be known of them on the lower level. But even though each knowson his own level, the knowledge becomes the same knowledge which spells eternal life for the sheep.

It belongs to the good Shepherd’s place among the sheep by the Father’s appointment that he lays down, places his life for the sheep. There is something about the Greek structure in the text which makes the sheep to differentiate from those which are not Christ’s sheep. The sheep is almost tantamount to “my” sheep. Christ does not lay down his life for those who are not his sheep. This is evident from the fact that Christ tells the unbelieving Jews that they do not hear his voice because they are not his sheep. Were they his sheep they would surely hear as those for whom Christ laid down his life.

Before we enter into the matter of Christ havingauthority to lay down his life for the sheep, we ought to notice that there is a very close connection in the text between Christ being the good Shepherd who knows his sheep and his laying his life down for them. He knows his sheep not because certain people were willing to use their free-will for a salvation which allegedly is made possible for them. His sheep are those who were given him from the Father from before the foundation of the world in the counsel of peace. That constitutes them to be his sheep. This is denied by till Arminianism and Pelagianism; but it is the gospel truth.

Christ has received a “commandment,” a mandate from the Father to lay down his life for the sheep. He did not take this glory for himself by his own will. It was thus appointed him to do. He is appointed of the Father to become the good Shepherd. He is the “David, the king” of prophecy, who shall rule over all the flock of God. (Ezekiel 37)

As the appointed Shepherd he has the “authority” to lay down his life in order that he might take it again. And in this he merits the Father’s love as the Shepherd of Israel and fulfils all righteousness. In any other event he would have been an imposter, a usurper of power, another Satan. But now he is greeted of God to be his good Shepherd to whom all the sheep belong, both of the Old and of the New Testament. 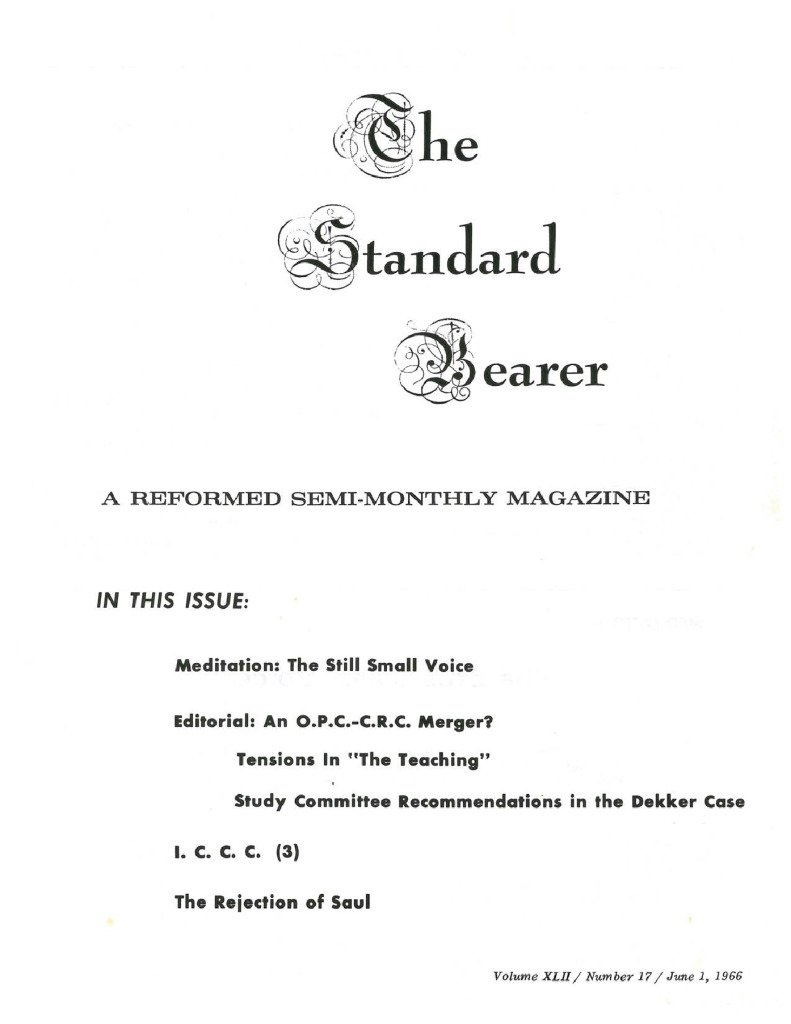