“The Good Shepherd, His Shepherds, and His Sheep” (2)

In a previous study we have seen that John 10 teaches that Jesus is the Christ-Shepherd of God.

There are many other references in the Bible to God and Messiah being Shepherd. The good Bible student will, in his study of John 10, be aware of and refer to such passages as Psalm 23; 79:13; 80:1; Isaiah 40:11; Jeremiah 23:1-6; and Ezekiel 34. But John 10 is the outstanding Shepherd chapter. In it Jesus, two times, declares, “I am the good shepherd” (vv. 11, 14). And there is much other instruction on His being Shepherd. This is the “fullness” of revelation, given in the fullness of the time. The incarnate Word is speaking and fulfilling all the truth about the Shepherd of Israel. Having considered in some detail Jesus’ “I Am” statements in verses 11 and 14 (cf. SB, April 15, 1997), we now turn to the first verses of this precious chapter of sacred writ.

Here in verses 1-5 is a parable (cf. v. 6), or figure, of shepherds, their shepherding, and sheep. About this parable William Hendriksen, in his commentary on John, writes:

The figure which underlies the allegory is that of an Oriental shepherd, who in the morning seeks to enter the fold where his sheep are kept. The door-keeper opens to him, and the shepherd then puts out his own sheep, calling them by the pet-names which he has given them. Hence, a little later in the day we see this shepherd leading his sheep to pasture-grounds, and by his call assuring them of his constant presence. At nightfall the shepherd returns with his flock and protects them against wolves. He is willing, if need be, to risk his own life in their defence. Being a real shepherd he is deeply interested in his sheep (p. 117).

In giving this detail of shepherds and sheep, Jesus reveals many things about Himself as the good Shepherd. He also has much to say about His under-shepherds. Jesus Himself is described as the “door” of the fold which opens to these shepherds (vv. 2, 7, 9). The shepherds are Jesus’ ministers of the gospel. They are appointed by Jesus, and on His behalf, to care for the sheep, the church, throughout the ages. These are distinguished from false shepherds, thieves and robbers, who seek to steal, kill, and destroy the people of God (v. 10).

Let us now turn to the truth of these under-shepherds—without losing our focus on the Shepherd. For though the presence and work of under-shepherds is very important for the church, yet they are only shepherd-ministers; Jesus alone is Shepherd-Messiah. They are ministers of the Word; He is the Word. They are shepherd-men, under the Lord-Shepherd, with all the sheep. They are under Him who is the Shepherd-God.

Questions and Comments for Meditation and Discussion

1. Main elements of the parable.

It is helpful first of all to have clearly before our minds who and what Jesus is referring to when He speaks in this parable. What is the sheepfold? Who is the door? Who are the thieves and robbers? Strangers and hirelings? The good shepherds? Some have thought that the porter, who opens the door (v. 3), is the angel Gabriel or Abraham or Moses. Who would you say, in light of Scripture, the porter is? What is the pasture? Who are the sheep? Who is the wolf (v. 12)?

(Note: An important point to remember in interpreting this parable is that, as in all parables, there are not always intended to be spiritual meanings and references behind all of the elements of the story that is told or picture (as here) that is drawn. Some general rules of biblical interpretation to follow: First, interpret the parable in light of the main point or points that are being made. This should be obvious from the context. Second, come to your conclusions about the various elements in the parable in light of what Scripture teaches in the context and elsewhere.)

2. The authorization of shepherds under Christ.

*The main thing distinguishing true from false shepherds is, according to Jesus, that the true and good shepherds enter by the door but the false shepherds do not (vv. 1, 2). This “entering” the sheepfold by the door is a reference to the minister’s lawful calling or authorization and right to be a minister of Jesus. Explain what this lawful calling is. We distinguish between the subjective or inner calling, and the objective calling. The inner calling is a man’s conviction in his heart that he has the gifts and is being led of the Lord to be a minister. The objective calling is the confirmation of the calling a man may feel in his heart by the church’s approval and “sending” of this man to be a minister. Discuss how the following passages speak directly to the matter of the qualifications and calling of ministers: I Timothy 3:1-13; Titus 1:5-9; Acts 13:1-3; Ephesians 4:11ff.; Hebrews 5:4.

*False shepherds do not enter the sheepfold by the door. They climb up some other way (v.1) to get into the congregation or onto the mission field. They are not, in other words, lawfully called by Christ and His church. How do such “fake” ministers get into the fold? In other words, what is the “other way” they climb? What are some motives which a false shepherd might have for entering the ministry? To what extent are congregations/denominations and seminaries to blame for letting such shepherds in? Why do you suppose Jesus, the Good Shepherd of the church, allows in the false shepherds?

3. The identity of true and false shepherds.

*Jesus speaks of the fact that all who came before Him were thieves and robbers (v. 8). To whom is Jesus referring? (Note the problem in interpretation: surely Jesus could not be referring to all the leaders there ever were in Israel—to a Moses or Elijah, or to John the Baptist! Might He be referring just to the present leaders in Jewry? Anything in the text to support this interpretation? Hint: note the tenses used.)*There is something about the voice, both what is said, and how it is said that denotes whether a shepherd is true or false. That is why the true sheep listen keenly for the voice of their shepherd (cf. v. 3, 4, 5, 8). For what voice, for whose voice are the sheep listening? What words and what manner of speaking distinguish true gospel ministers from false ones?

*Today: Who are the good and bad shepherds? What are the different sounds (gospels) going out from the pulpits today?

4. The work of shepherds.

*The work of the good shepherds under Jesus is to lead the flock out of the fold into good pasture by day, and then to lead them back safely into the fold at night. What does this work translate into from a spiritual point of view?

*The shepherds, as they go in and out from day to day, must always go in and out by the door, Jesus Christ (v. 9). What does this mean for ministers of the gospel (for example: what are the implications of this for their prayer-life, their studies, their preaching, their pastoral labors…)?

*The shepherds are devoted to their work, and to the sheep in their charge. They will, in fact, lay down their life for the sheep, though a wolf come and threaten both shepherd and sheep. In what way are the wolves threatening the church today? How do ministers show their selfless devotion to their calling? Why are they so devoted?

*False shepherds do the devil’s work. They are described as thieves, robbers, strangers, and hirelings. They are not at all devoted to the flock of God, but, when any trouble comes, like a wolf they flee (v. 12). In fact, their sole purpose for being among the flock is to steal and to kill and to destroy the sheep (v.10). How do the false shepherds go about doing this? Can we see their work today?

5. The fruit of good shepherds’ work.

*Ministers lawfully called of Christ, who enter in by the door, “shall be saved, and shall go in and out, and find pasture” (v. 9). There is reference here to a twofold fruit of the ministry of the Word: it is for the good of both shepherd and sheep. The shepherd himself is saved through the faithful execution of his calling (cf. I Cor. 9:27; I Tim. 4:16). And the sheep themselves are led to the pasture the shepherd is able to find for them—pasture which is their life and health! Discuss in this connection the following proposition: Ministers save, and Christ saves! (Cf. I Cor. 9:22; Lord’s Day 31.)

*False shepherds, out to steal, plunder, and kill, actually do this. They are very good at their work. Do we see this today—carcasses of sheep, churches mauled and maimed, and little lambs devoured by wolves? Explain how this is possible in light of the doctrine of the preservation of the saints (John 10:28, 29).

*As in John 10, Scripture often refers elsewhere to God’s people as sheep (Ps. 23; Is. 53:6). List and discuss three main characteristics of sheep.

*What enables the sheep to have such good ears, and inclinations to hear and follow only the right shepherd? Cite verses from this passage and others for proof.

*Through the ministry of the under-shepherds, Jesus Himself calls His flock and feeds them. Such is the implication of Jesus’ rather sudden transition from calling Himself “the door” of the sheepfold, to declaring Himself to be the Shepherd who comes, in contrast to the false shepherds, to give life abundantly (v.10). What response toward ministers ought this identification of Jesus with His shepherds to evoke from the congregation? Are ministers truly “reverend” shepherds?

*When Jesus speaks of “other sheep” which He has which are not of this fold (v. 16), to whom is He referring? Cite texts from both Old and New Testaments to support the teaching of the “other sheep.” Give proof from verse 16 itself for the election, universality, holiness, and oneness of the church.

*Devils call the Holy Deliverer a devil. Madmen call the Mediator mad. We see this in the immediate reaction of many among the Jews to Jesus’ shepherd-talk (vv. 19-21). These Jews showed by this that, though they were in the outward fold, the church institute, they were not true sheep (Rom. 9:7,8). Is this true also today—that some or many in the church are not true sheep of God? Discuss in this connection the concept of the remnant in Scripture (cf. Is. 1:9; 10:20-22; Rom. 9:27; 11:1-5). In what way do the false sheep in the church slander the remnant, the true sheep, as the Jews in John 10 slandered Jesus?

Review the passage, John 10:1-21, in light of the fact that these things are written that “ye might believe that Jesus is the Christ, the son of God; and that believing ye might have life through his name”! How does this passage show clearly that Jesus, and only Jesus, is the Christ? What are the main characteristics here set forth of those who believe Jesus is the Christ? What one blessed feature of the believer’s life as a sheep of the Shepherd is underscored? How is this a comfort and delight to you? 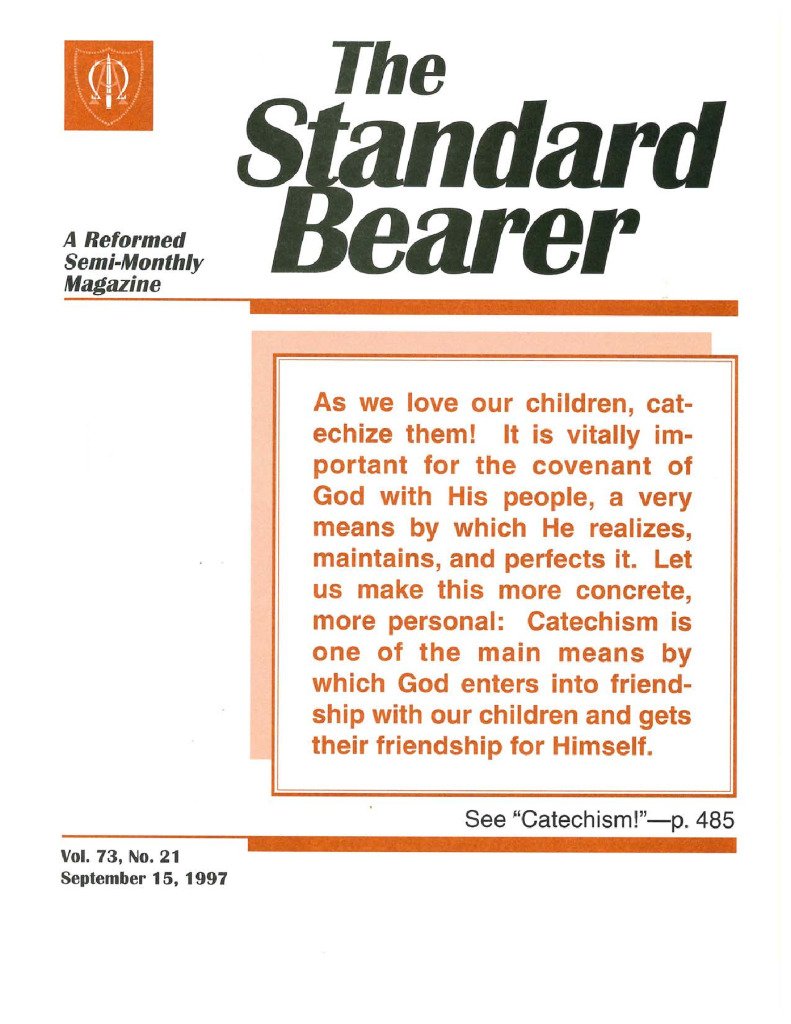