The GKN on the Nature of the Authority of Scripture (7)

The GKN on the Nature of the Authority of Scripture (7)

It has been a few months since we last dealt with this subject (cf. June, 1981 issue), and so we shall briefly review what was written at that time, so that our readers may catch the thread.

In the June issue we began our treatment of the crucial chapter of the Report/Decision of the General Synod of the Gereformeerde Kerken (GKN) concerning the Nature of the Authority of Scripture. Chapter IV deals directly with this subject.

In the present installment of this series we return to a discussion of the first section of Chapter IV, where the Report’s view of Scripture’s authority is set forth.

Meanwhile, we mention parenthetically that an English translation of this Report/Decision is now available. This English version is entitled God With Us-on the nature of the authority of Scripture. Some of our readers may be interested in obtaining it. Write to RES Secretariat, 1677 Gentian Dr., S.E., Grand Rapids, MI 49508. The cost is $3.00 dollars plus 50 cents for mailing. This 100-page booklet will be an eye-opener as to the deterioration of the Gereformeerde Kerken.

This section of the Report begins in a very strange way. It refers not to Scripture and the Confessions, as might be expected of a Reformed synodical study committee; but it refers to the fable of Nathan the Wise is a play written by G.E. Lessing. In other words, this chapter begins already with the wrong method. At the conclusion of this initial reference to Nathan the Wise the Report makes three statements, as follows:

1) As Christians we cannot prove to other religions which also appeal to a holy book that our Bible is the only true, authoritative Word of God. The authority of Scripture is known and recognized only in faith.

2) Others in whom we have placed much trust have testified to us of this faith and still continue to do so. It is through them that we have come into contact with faith. If we have come to this conviction of faith, we should be thankful to them for their instruction and we should be aware that it is only in community with them and with the Church of all ages that we can say what the authority of the Scripture concretely means for us.

3) Living between the time when God gave His Holy Word and the end of the times, we as Christians can do no better than to show that the recognition of the authority of His Word effects salvation in the world.

Now it is not my intention to discuss these statements in detail. In fact, it is not entirely clear to me what the intent of these statements is. But one thing is clear. Already at this point the Report studiously avoids making any statement to the effect that the Bible is in itself, objectively, of divine authority—period. Notice that first statement. It can, of course, be understood favorably. But it studiously avoids saying anythingobjective of the authority of Scripture. Does Scripture have divine authority whether or not that authority is known and recognized in faith? You understand, of course, the approach here is in complete agreement with the notion of “relational truth” in the first chapter of the Report.

But in the next part of this section the cat begins to come out of the bag, so to speak.

First of all, the Report employs a very old ploy that has been used to disparage the orthodox view of Scripture. Similar statements are made elsewhere in the Report. And while it is true that in this instance the Report does not ascribe this belief to anyone, yet the very fact that it makes reference to this idea shows the direction of the Report. Notice:

Along with its valuable elements, the fable of Nathan the Wise has also various shortcomings. One that is immediately apparent is the image of the ring. Where the ring came from, who had given it its miraculous power, that the story does not tell. Especially unsatisfactory is the comparison of a tangible object with the revealed truth, the Word of God. Words can be transmitted only through the mediation of people; they do not exist apart from those who speak, write, hear or read them. Our Bible did not fall as an object from heaven but has been given to us through the mediation of people. (bold letters by author)

Now I do not care for the entire reference to the fable, as I said. But the one item which the Report finds “especially unsatisfactory” I would classify as satisfactory: the comparison of a tangible object with the revealed truth. But the Report, of course, does not want objective truth, only “relational truth.” After all, what nonsense is it that words “do not exist apart from those who speak, write, hear or read them?” But I am especially concerned about the very last statement in the paragraph just quoted. I recall that when Dr. Harry Kuitert spoke at the Christian Reformed Ministers’ Conference a good many years ago, he made similar statements, to the effect that the Bible did not simply come as a bolt out of the blue, or just drop from the sky. Here the Report makes the point that “our Bible did not fall as an object from heaven….” Now statements like these are a very gross and blatant attempt to draw a caricature of the orthodox view of Scripture. In response to them one can only ask: what orthodox Reformed man ever taught that the Bible came in that way? No one! Well, then, why bring up a matter which no one believes? Whether or not the Bible fell out of the blue is not an issue and never was an issue. And if men impute this idea to those who hold to the absolute divine authority and origin of Scripture, they are building straw men.

But, you see, this is but one step in a subtle plot to detract from the absolute authority and divine origin of Scripture.

The next step follows. After citing many Scripture passages in answer to the question, “Why then must we nevertheless attribute divine authority to such human work?” the Report goes on to claim:

1) In Bible times most of the authors were speakerswho dictated their writings and whose words were written down by professional scribes.

2) In other cases we must assume that the writers jotted down as carefully as possible what they remembered.

3) It also happened that words once spoken were for a long time passed on by oral tradition before they were inscripturated.

Again, while there may be an element of truth in statements like this, the whole intent is to prepare the way for the idea that the Bible is not infallible and inerrant. This becomes plain in the immediately following paragraph:

We may believe that the work of the writers also was done under the special care of the Holy Spirit and that they did their work extremely conscientiously, certainly when it concerned texts which they recognized as holy. Yet we have to reckon with the possibility that now and then the writers made human mistakes. For example they, entirely in good faith, may have given a date to an event, which historically viewed, was wrong. We shall see that the assumption that the original manuscripts [the so-called autographa) were not without error is not at all in conflict with the recognition of the authority of Scripture, provided one is well-aware of the nature of this authority. Actually, even if the autographa were without error that would still not help us, because of no one Bible book has the original manuscript been preserved. We do know for a certainty that those who later transcribed the manuscripts century after century did make mistakes. This appears from the copies which have been discovered.

Thus the Report begins to introduce into the picture the possibility of human errors in Scripture.

Even when the speaker of the Word of God was gifted with the Holy Spirit (and) stood as close to the scribe as was the case with Paul we do not hear solely the voice of the Spirit. He who reads the letters of Paul cannot help being impressed by the fact that they also bear the stamp of his personality. And even more so, of his personal life. It is as if the man Paul is somehow present in his writings. One can therefore really not speak about the divine Author without in the same breath mentioning the human author. The Bible is the product of a special relation between God and people who were elected by Him.

And thus we have arrived at a very old and common position, namely, that the Bible is the product of dual authorship, divine and human.

It only remains for the Report, by means of its so-called relational concept of truth, to refine this very old error and try to make it more palatable. Meanwhile, remember that the Report ends by contradicting our Belgic Confession, as we shall see.

But about this we shall write next time. 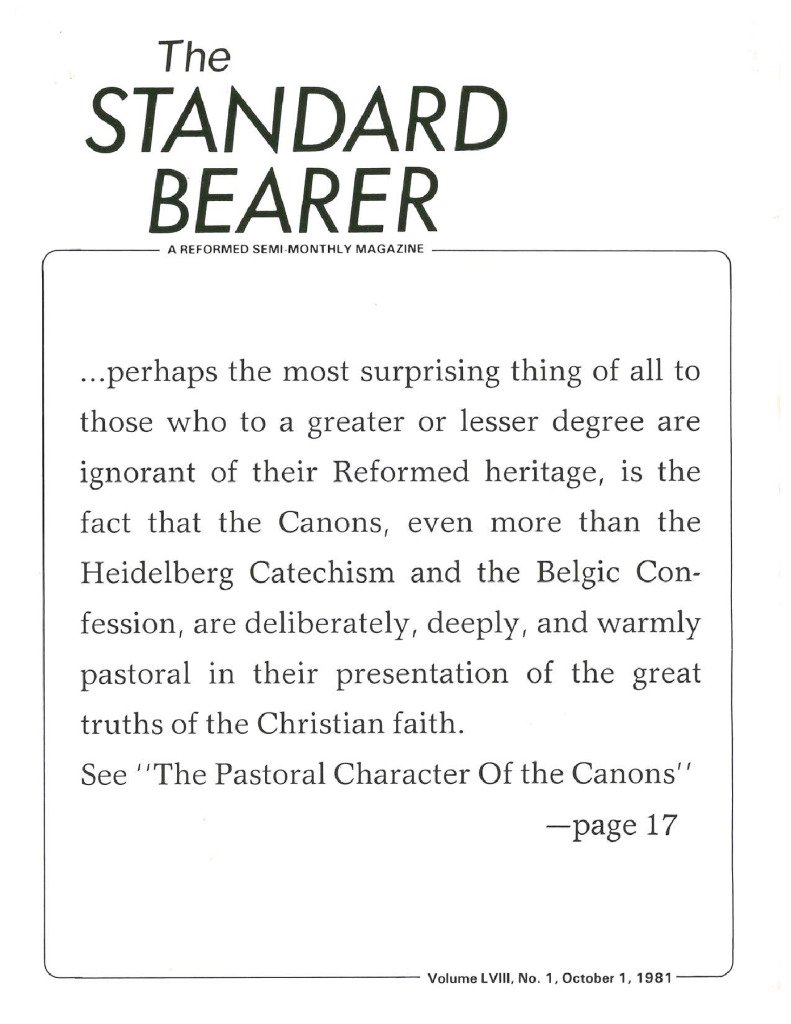