The GKN on the Nature of the Authority of Scripture (2)

The GKN on the Nature of the Authority of Scripture (2)

. Before turning to a discussion of the Report itself, I must relate a significant exchange of letters between the official Information Service of the GKN andWaarheid en Eenheid, the paper which, as I reported earlier, published the entire Report on the Nature of the Authority of Scripture. This exchange of letters was published on the front page of the January 30 issue ofW & E. It must be remembered that originally this same Information Service had sent the report to broadcasters and press with only the restriction that it not be published before the end of October. Later, after the Synod of the GKN adopted the report, it mandated its deputies (Information Service and Church and Theology) to prepare a reworked edition of the report “which can function in the local churches.” Evidently W& E’s publishing of the report infuriated the deputies of Information Service. They accusedWaarheid & Eenheid of violating the state’s laws concerning authors’ rights, accused them of having hindered the leadership of the churches, and accused them of causing still-to-be-estimated damage. But the deputies declared themselves willing to consider the incident closed if W & E would give written notice, if necessary by telegram, promising to stop distribution of the Report immediately.

Talk about hierarchy! And this is not even hierarchy by a synod and synodical decision, but by mere deputies of the synod!

But Waarheid en Eenheid was not about to be bullied. They sent a very sharp letter of reproof to Information Service in which they pointed out the corruption and hypocrisy of the latter’s position. The letter is too long to quote here, but I do want to say to Waarheid en Eenheid, “congratulations! Don’t back down.”

Meanwhile, the fact that the publishing of the original report/decision so riles the powers that be in the GKN makes one wonder if there is some kind of synodical skullduggery afoot with the edited version to be distributed in the churches. By a report “which can function in the local churches” do they perhaps mean a report that is more palatable and less overtly Scripture-denying? Time will tell.

Turning now to the Report/Decision itself, let me first furnish a general outline. The Report begins with a brief introduction which traces the history of the Committee and its work and which also informs us that the various chapters of the Report were written by individual members of the committee, on the basis of discussions within the commission. It adds that while there is difference of views concerning the sub-sections, there is no difference of opinion among the deputies concerning the main lines.

Chapter 1 is entitled “Changes in the Concept Truth” and includes pages 3-12. Its author, I learned from another source, is Dr. C. A. van Peursen, a philosopher from the University of Leiden. Chapter 2 is entitled “Historical-Critical Investigation of the Bible” and includes pages 13-19. Chapter 3 covers-pages 24-32 and deals with “The Developments of Views of Scripture in the History of the Gereformeerde Kerken.” All of these chapters are really preparatory. In Chapter 4 the main subject is finally reached: “The Nature of the Authority of Scripture.” This is by far the longest chapter, as might be expected, and runs from page 33 to 75. A concluding chapter, which is not less important for its being practical, is entitled “Together Farther” and includes pages 76 to 84.

Some of the material in these chapters is very abstruse and difficult to follow. This is particularly true, as might be expected, of the first chapter. But I will do my best to furnish the gist of each chapter and to furnish criticism. It stands to reason that the meat of the report is in Chapter 4. When we reach chapter 4, there will be little difficulty in making plain how the Report makes a complete shambles of the authority of Scripture and departs completely from the Reformed position. But it is also important to understand how the Report reaches that position. So the ready will have to exercise a little patience, as well as occasionally put on this thinking cap, especially when the Report becomes somewhat abstruse, as in Chapter 1.

To the task, then!

The burden of Chapter 1 is that truth is what is called “relational.” We must not have an objective conception of truth, nor a subjective conception; but we must conceive of truth as relational. To my mind, this is nothing but a refined brand of pure subjectivism; but about that later. First we shall have to try to understand these terms. For this chapter really determines the whole position of the GKN concerning the nature of the authority of Scripture. This relational conception of the truth is also applied to Holy Scripture and its explanation and understanding, with devastating results. In the main, the result is that anyone can make Scripture say whatever he wants it to say. I cannot refrain from pointing ahead to this, though I do not intend to explain it immediately. But I want the reader to understand where Chapter 1 is going to take us. Eventually this Report is going to say that the Bible is no more trustworthy historically than are other sources. Eventually it will teach that when the Bible reports a great victory and a great slaughter of the enemy, that might, in fact, have been a defeat. Eventually it will say that the report of the incest of Lot’s daughters (with the resultant birth of Ammon and Moab) is not factual at all, but merely a piece of folk-humor according to which they meant to say that all Ammonites and. Moabites are bastards. All of this is possible because of the position taken in Chapter 1, that truth is “relational.”

However, before we enter into the contents of this first chapter of the Report, let us take a look at its methodsand approach.

In Reformed circles we have become quite accustomed to approaching any question posed in the churches and any study commissioned by a synod from the point of view of Scripture and the Confessions. This is especially true of any majorstudy. Who among us would dream of conducting a study of the subject of the nature of the authority of Scripture without taking his starting point in Scripture and the Confessions? There we begin. There we find our basis. From these we derive our fundamental givens. And if it is necessary to shed light on some new error that may have arisen or on some contemporary problem or question or method which is not, let us say, directly touched upon in the confessions and on which the churches find it necessary to express themselves, we proceed on the basis of those fundamental givens of Scripture and the Confessions. This is the tried and true method which has been followed for centuries in Reformed churches.

The GKN in this Report have completely abandoned that method.

This is the first thing that strikes one who reads Chapter 1. The Report, so to speak, approaches the subject “from left field.” Why begin a report on the important subject of the Authority of Scripture by discussing “changes in the conception of truth”? And if this were only meant to be introductory! But the thrust of this chapter and of the Report is that a changed conception of truth, i.e., the relational view, is correct, is to be accepted, and is to be determinative with respect to one’s understanding of the nature of Scripture-authority. The chapter does not merely furnish some background information concerning today’s thinking, information concerning the background of thought against which we must view the matter of the authority of Scripture and must maintain a Scriptural-confessional position concerning that authority. No, it purposes that a changed conception of what truth is also changes our understanding of the inspiration and authority of Scripture.

This is bad enough in itself.

But then the Report proceeds to follow a completely philosophical approach and method in developing this entire subject of this changed conception of truth and in evaluating it and its implications with respect to the subject of Scripture and its authority. This is very striking. Even before I had read the information in one of the Dutch papers, I had come to the conclusion that the chief author of this part of the report had to be a philosopher, not a theologian; and, knowing that Dr. van Peursen was a philosopher, I had made an educated guess that he must be the author. And later information confirmed the correctness of my guess. That will give the reader some indication of how thoroughly philosophical this section of the Report is. It is possible, of course, to arrive at a Scripturally grounded and confessional oriented answer to the question: how must we conceive of truth? But the Report spurns this approach. In fact, it really makes no attempt to prove that this contemporary, “relational” conception is correct. It simply assumes its correctness, and then proceeds on that assumption. In other words, granting for a moment that the basic approach of the Report (that is, from the viewpoint of the truth-concept) is correct, the Report then also begs the question. It assumes what it ought to prove.

And this implies from the outset that the whole Report really comes crashing down of its own weight. For it is this unproved relational conception of truth that forms the basis of the entire Report.

Nevertheless, we shall have to consider this so-called relational conception of truth in order to understand the rest of the Report. But this will have to wait until next time. 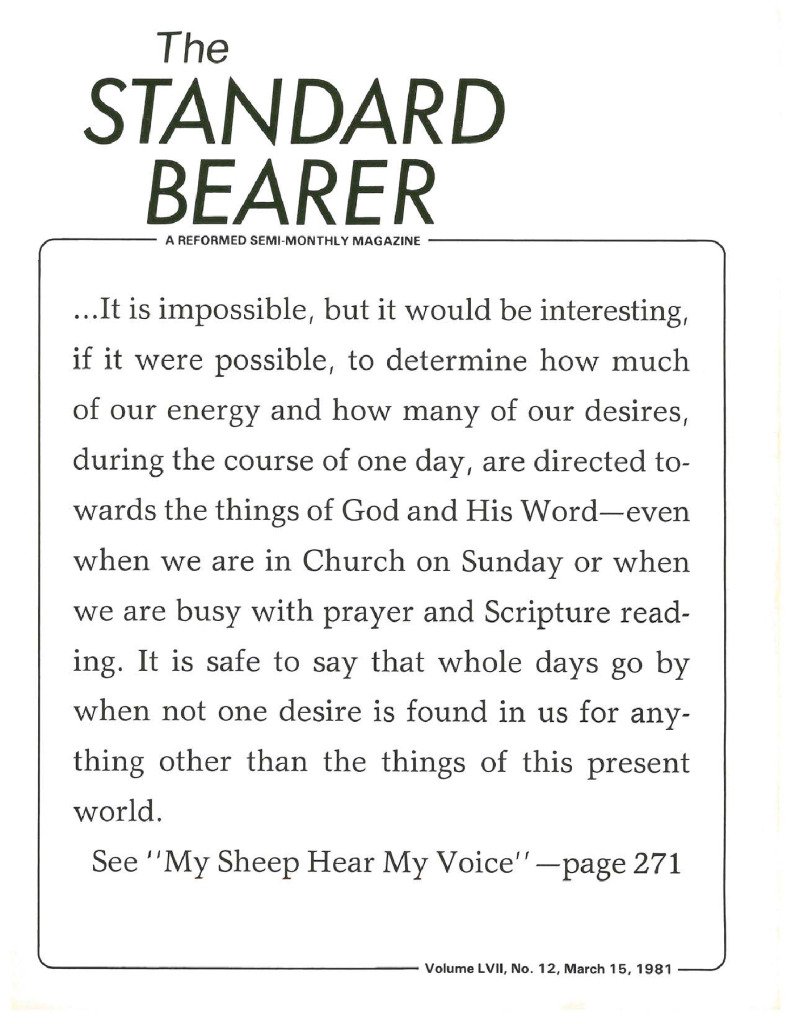