The Fruit of the Spirit: Temperance

The Fruit of the Spirit: Temperance

The last aspect of the fruit of the Spirit is the virtue of temperance. Temperance is more commonly known as “self-control” or “self-discipline.” Another word similar to temperance is “modesty.”

This virtue is not mentioned often in the Bible, in comparison to some of the other aspects of the fruit of the Spirit that we have considered. It is mentioned seven times in the New Testament. Included among the seven references is its use in Acts 24:25, where it refers to how a governor should rule well and live in view of the coming day of the Lord in His judgment. In I Corinthians 7:9, the apostle Paul mentions temperance in connection with the single life, sex, and marriage. Paul wrote, “But if they cannot contain (i.e., be temperate), let them marry: for it is better to marry than to burn.” In Titus 1:8, temperance is listed as one of the qualifications for the office of elder. Another example of the use of temperance in the New Testament is II Peter 1:5-6. There Peter admonishes: “add to your faith virtue; and to virtue knowledge; and to knowledge temperance; and to temperance patience; and to patience godliness.” Our knowledge of the Lord and His truth must be coupled closely with virtue on the one side and temperance on the other.

Finally, in I Corinthians 9:24-27 Paul wrote about the importance of temperance in his own life and work as an apostle. He wrote, “And every man that striveth for the mastery is temperate in all things. Now they do it to obtain a corruptible crown; but we an incorruptible.” If temperance is vital for the success of a worldly athlete for the prize of an Olympic gold medal, should it not be regarded by us as more than vital for the prize for which we press forward by faith? That it ought to be highly valued by the believer is emphasized by Paul when he writes in I Corinthians 9:27, “But I keep under my body, and bring it into subjection: lest that by any means, when I have preached to others, I myself should be a castaway.”

The temperance that the apostle Paul needed in his own life and apostolic labors is illustrated in I Corinthians 9:26 by two familiar examples. The Olympic marathon runner or sprinter competed in his races with the desire to win the prize of the winner’s wreath. However, to obtain that championship prize, the marathon runner or sprinter had to train extensively and prepare both his body and mind to race for victory. In like manner, after training himself vigorously and extensively both mentally and physically for the grueling matches, the boxer competes in the ring with explosive intensity, meticulously honed reflexes, and a deliberate strategy in order to obtain the championship belt. Both types of athletes do everything necessary, governing all aspects of their life, mind, and body meticulously, in order to obtain the sole objective of the gold medal or championship belt.

Similarly, the apostle explained that it was necessary for him to be so governed in all areas of his life that he could be effective in his work for the welfare of the church. All distractions and hindrances had to be rejected and resolutely avoided. He was required to keep even his body under control so that the church would be faithfully served. Without temperance, the apostle would have been at best like a shadow-boxer, one beating on thin air or beating on the wrong opponent; or like a marathon runner who runs in the wrong direction or runs off course onto an illegal shortcut, because of which he is disqualified. Without temperance, Paul would have been an unfaithful preacher, and the welfare of the church put in jeopardy.

In light of the apostle’s instruction, we may understand that temperance for the officebearer and the believer alike is that spiritual ability to bring himself under control for a godly and faithful life unto the Lord. Temperance is the inner strength to be a master over oneself and to be ruled with a Christ-centered purpose in life. One who is temperate does not let himself become a slave to whim, uncontrolled passions, the deceitfulness of riches, carnal lusts, or other evils, such as peer-pressure. One who is temperate puts himself under such control, that whatever good and profitable thing he must desire to do, that is the godly thing that he pursues by faith.

Temperance applies to our daily bread. Are we temperate with our food: eating in moderation?

According to II Peter 1:6, true temperance is joined closely to virtue, faith, and knowledge. True temperance arises out of a regenerated heart of faith, aims for the eternal and spiritual value of God’s glory, and is full of the knowledge of God, Christ, particular redemption, the commandments of the Lord, and a life motivated by thanksgiving to God. True temperance aims at the prize of covenant fellowship with the Father in heavenly glory in the way of faithful and thankful service to Him.

For that prize and for our salvation and redemption, Christ was temperate. In opposition to Christ’s resolute discipline to fulfill all righteousness for us in love to God, Satan tempted Jesus in the wilderness to turn the nearby stones into bread. Though He had been without food for 40 days, Christ kept His body in subjection and did not permit his aching stomach to determine how He would respond to Satan. In His defense against and victory over the Devil, Christ declared authoritatively from Scripture that “man shall not live by bread alone, but by every word that proceedeth out of the mouth of God” (Matt 4:4). Throughout His ministry, Christ had perfect self-discipline and self-control. When rejected by the people of Nazareth at the cliff’s edge and turning towards the unbelieving multitude to walk through the midst of them, Jesus did not call down fire from heaven to burn them all up. Instead, He bore the reproach and rejection of wicked men as part of the accursed way that He was required to walk for our full redemption.

Because of Christ’s redemption, the temperance of Christ is given to us as a sovereignly-worked gift of the Spirit of our Lord. Of course, true temperance is not naturally present in us. Daily our sins in many ways show that we do not govern ourselves very well in the service of the Lord. By nature we are intemperate and prone to excess in self in many ways. Hence, true temperance is a miraculous work of God’s grace in and through us.

Bringing ourselves under the regulation of Christ and His Word makes us realize that the words “self-government,” “self-control,” or “self-discipline” might be misleading. He who is truly temperate does not wish to be governed by his “self.” The Spirit of Christ teaches us to be willing and ready to live in submission unto Him. Although temperance is the ability to govern all of our bodily and spiritual members in a harmonious choir of thanksgiving to God all the days of our lives, yet ultimately temperance is the spiritual ability to be governed willingly by Christ’s Word and Spirit. Temperance delights to be bound by Christ’s yoke, which is easy and light. Temperance delights to be a citizen of Christ’s kingdom and under His government of grace. True temperance flourishes in the Christian’s liberty of being bound entirely by the government of Christ.

As you can readily understand, this temperance does not mean an easy life. It was not so for Paul. Likewise, the temperate believer must live a life of self-denial and must war daily against his own intemperate old nature. He must also expect to face persecution from the unbelieving world. For example, he will be mocked by worldly fellow workers as they head off to the night club or neighborhood pub after a long day of work, and he heads home to the needs of his wife and children. The temperate believer will be mocked by his worldly, fun-loving neighbors because he and his godly wife must closely regulate their use of money for the support of the church, the poor, his family, and the Christian school. The temperate Christian young woman and young man will be mocked when they in temperance reject the world’s temptations to flaunt their sexuality by immodesty in dress and in dance with or in front of the opposite sex. In spite of the many difficulties that the spiritually temperate must face while living in a world intoxicated with carnal self-indulgence, if this virtue of temperance, along with the others of the fruit of the Spirit mentioned in Galatians 5:22-23, be in them, then they shall neither be unfruitful nor barren branches in the knowledge of our Lord Jesus Christ.

There is for the temperate believer the encouraging hope of a worthy crown of glory at life’s end because of God’s grace in Christ Jesus. Athletes today pursue corruptible crowns. Being corruptible, they and their earthly glory will all perish, either in this life already under God’s curse, or most certainly in the great fire and destruction upon the earth and creation when our Lord in His final appearing shall make all things of the earthly creation new and heavenly. However, for the truly temperate in Christ there is that better crown, which does not fade in its glory and value. Having in spiritual modesty and discipline finished his course, fought the good fight, and reached the finish line of his work and life, the apostle could be confident that the Lord would give him in grace a beautiful crown (II Tim. 4:7-8). Ought not we in holy temperance to pursue the same crown from the Lord whom we love?

May the Spirit of our Lord by His almighty and sanctifying grace make us fruitful branches in Christ Jesus, so that we may bring forth the fruit of the Spirit abundantly and in all its spiritual sweetness to the glory of God triune and to the praise of His wondrous grace. 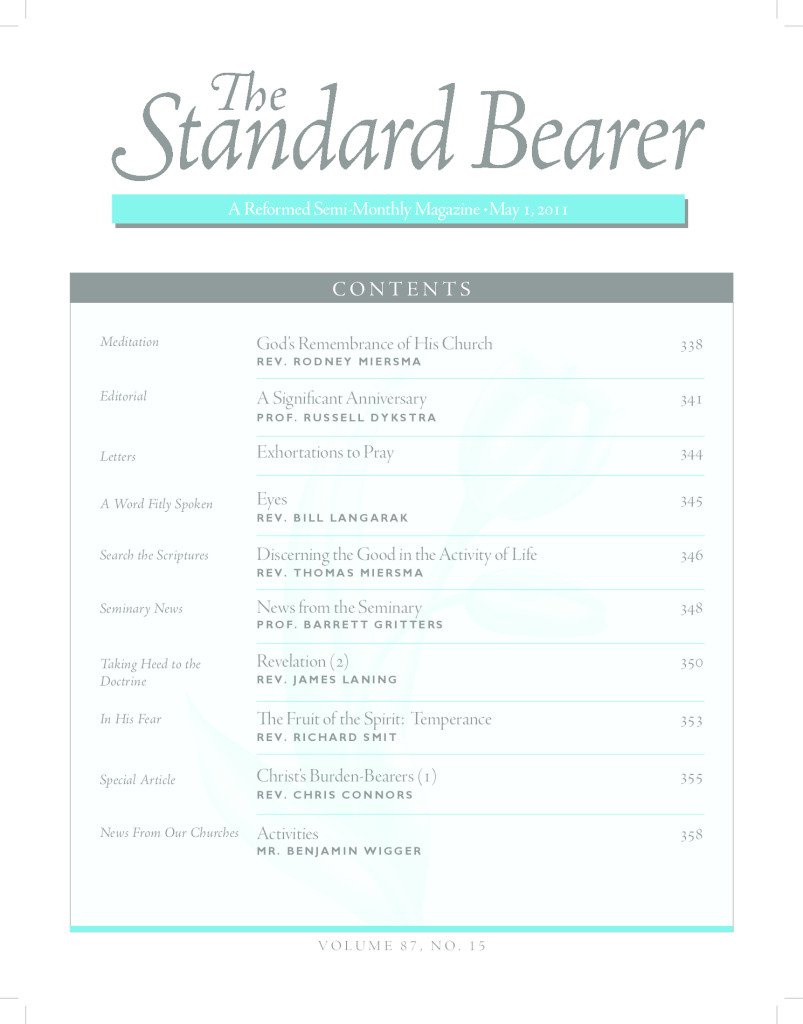