The great multitude of mankind does not work for the food that endures unto everlasting life [John 6:27], and the result is discontentment. Empty complaints are heard about unemployment. Is then the activity which is commanded by Jesus “Seek ye first the kingdom of God, and his righteousness” [Matt. 6:33] so burdensome, so grievous, that there is reason to be averse to it? On the contrary! Never has anyone who was busy in this work complained about it. The most outstanding God-fearing people have found inexpressible satisfaction in it. Not only this; Jesus Himself has led the way for us: He called it His food to do the will of His Father. Let me point this out to you.

The Savior spoke these words at the very beginning of His ministry. In Judea, the envy of the Pharisees had already become manifest. The Lord therefore judged it good to go again to Galilee, where the sermon on the mount, as we commonly refer to it, was preached by Him. There were two ways which led thither. The one ran through the land east of the Jordan and was the longest. The shorter went through Samaria, but was seldom taken, because the Jews and the Samaritans were hostile to each other. Nevertheless, Jesus chose this way. Accompanied by His disciples, the Lord came in the vicinity of the Samaritan city Sychar and sat down, wearied by the journey, at Jacob’s well. But the disciples, who, I think, were muscular, strong men, went to the city in order to buy food. Now, while the Lord was sitting there by Himself, there came a woman to draw water. He entered into a conversation with her. And this had the result that that woman was convicted of her sins and brought to faith, so much so that she went away in great haste in order to gain also her fellow-citizens to Jesus.

In the meantime, the disciples, provided with food, had returned. They set what they had bought before Him and, knowing that He had been deprived of food for a long time, urged Him to eat. “I have,” Jesus responded, “food to eat that you know not of” [John 4:32]. The disciples said to each other, “Has anyone brought him food?” [v. 33]. And now Jesus said to them, “My food is that I do the will of him who has sent me, and finish his work.”

The idea of these words is that what food is for the mortal body of a man—so strengthening, invigorating, and necessary for a man—the doing of the will of His Father, who has sent Him and whose work He must finish, was for Him, as Mediator and Savior, according to the spirit. These words allow us a deep look into the disposition of the Savior. We hear in them mention of the food of Jesus. This is a food:

I. that witnesses to the inexpressible greatness of the Savior; II. that is an urgent reason for the sinner to come to Jesus; and III. that gives us a glorious prospect with regard to the future.

If it is given to us rightly to understand the language of the text, then at the end of our gathering for worship we will have to say, “Never have the glory and loveliness of Jesus been made more plain than by this word of the Savior.”

For us, it cannot be difficult, and in any case must not be difficult, to understand what the Lord means when He speaks of the will of His Father. Two chapters later in this gospel, we read that Jesus said to the Jews, when they were offended at Him, contradicted Him, and repudiated Him, “All that the Father giveth me shall come to me; and him that cometh to me I will in no wise cast out. For I came down from heaven, not to do mine own will, but the will of him that sent me. And this is the Father’s will which hath sent me, that of all which he hath given me I should lose nothing, but should raise it up again at the last day. And this is the will of him that sent me, that every one which seeth the Son, and believeth on him, may have everlasting life: and I will raise him up at the last day” [John 6:37-40]. Also the apostle Paul has spoken many times of the will of the Father. For example, he said, “Having predestinated us unto the adoption of children by Jesus Christ to himself, according to the good pleasure of his will” [Eph. 1:5].

All these passages speak of the will of the Father with the same word, so that the truth that Jesus intends is so plain that, although the theologians, as is usually the case, are offended by it, a child can comprehend the meaning.

If Jesus has come down from heaven, then He existed before He came to earth. If He has come down in order to do the will of the Father, then He was familiar with this will, has committed Himself to accomplish it, and has assumed an inexpressibly great work. This great work is, not only that He gather all who were given Him of the Father, but also that He preserve them and finally raise them and bestow upon them eternal life.

What a work it is that carries out this eternal decree of God! How much must be performed, in order that the good pleasure of the Father may be perfected! One thinks only of his own sins. I do not even mention that all of us have fallen away from God in Adam, our head, although Scripture does charge us with this guilt. But now let each one be convicted concerning the guilt of his own behavior. How have we behaved in our youth? Were we always obedient? How did we behave as a young man or a young woman? Was not a great deal of vanity manifest in our life? How do we behave as a man or a woman? How do we behave as an old man or an old woman? Many times we have spoken hastily and thoughtlessly of God and His service. Scripture says, “Thou shalt not take the Name of the Lord thy God in vain” [Ex. 20:7]. Many times we have used the day of rest entirely or partly for our own pleasure. The Scripture says, “Remember the sabbath day, to keep it holy” [Ex. 20:8] . . . .³

If there is someone who, like the rich young ruler, thinks, “all these have I observed from my youth” [Mark 10:20], let him ask himself whether he always has loved the Lord above all, whether he is willing to give up all his money, goods, honor, reputation, and life for the sake of his communion with Jesus, which is infinitely more than all those earthly treasures.

Let him ask himself whether he truly loves his neighbor as himself, as he ought to be loved himself. If we found our worst enemy sleeping on the edge of a giddy precipice, would we not be rightly condemned as unmerciful if we passed by without dragging him away from that dangerous place? How much more guilty is not the man who goes on living without extending a hand unto salvation, while his fellow men find themselves on a way that ends, not merely in temporal destruction, but in eternal perdition—in the terror of hell.

Indeed, there are many who tempt others to sin, or to continue carelessly in the way of destruction. They make themselves guilty of double murder of souls. And many parents give no thought to it, at least make no serious effort, to save their own children. They misuse the short time of life they have with their children, and the invaluable opportunity God gives them, to be saved by Jesus.

Well may each one of us cry out with Ezra, “O my God, I am ashamed and blush to lift up my face to thee, my God: for our iniquities are increased over our head, and our trespass is grown up unto the heavens” [Ezra 9:6].

These iniquities, not only of a single man, but of all that the Father has given to Him, Jesus has taken upon Himself. Therefore, He became their substitute, not only to make good the obedience that was demanded of us by God, but also to suffer the punishment which is threatened upon sin. God cannot deny Himself. His righteousness and the truth of His threatenings must remain undamaged.

Nevertheless, it was His will, His decree, His good pleasure to save a multitude that no man can count.

This work the Son of God has assumed and perfected.

How inexpressibly great is He!4

¹ Translation by Prof. David J. Engelsma of an excerpt from the sermon De spijs van Jezus, preached by VanVelzen in December 1886, when he was seventy-seven years old. The sermon is found in Avondstemmen. Opstellen van Wijlen Prof. S. VanVelzen (Leiden: D. Donner, 1897).

² The Authorized Version has “meat.” The Greek original is ‘food.’

4 This excerpt ends (because of constraints of space in the Standard Bearer) midway through the first point of VanVelzen’s sermon. 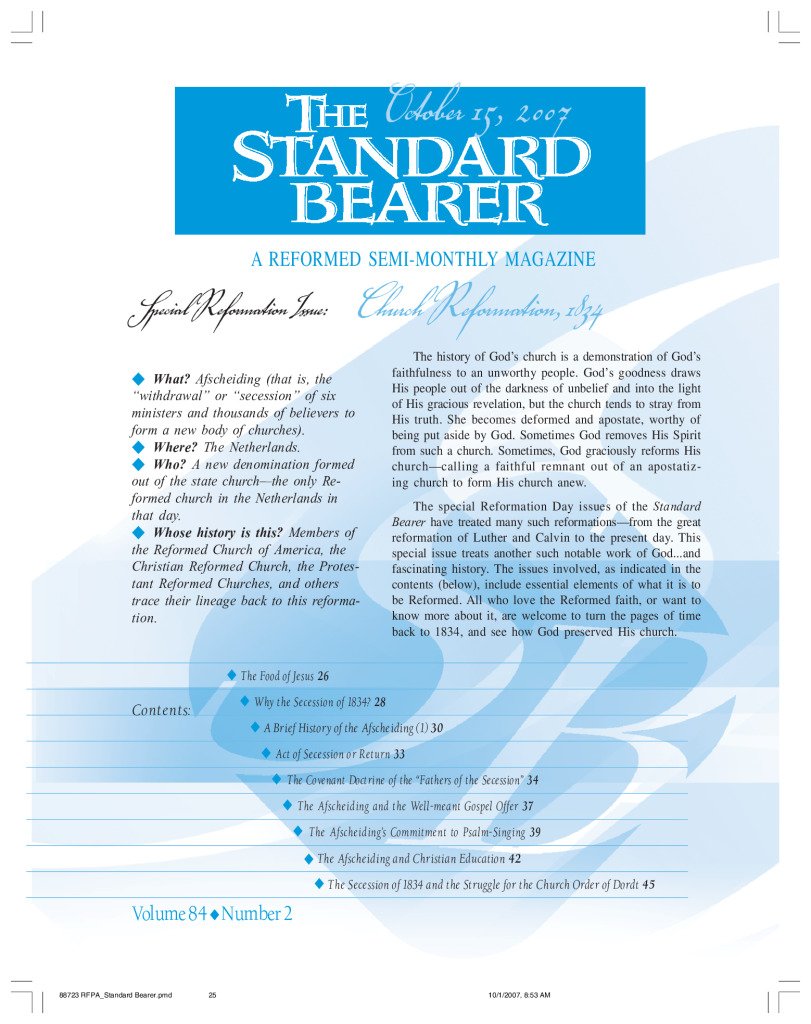