Ques. 52. What comfort is if to thee that, “Christ shall come again to judge the quick and the dead”?

Ans. That in all my sorrows and persecutions, with uplifted head I wait for the very same Person, Who before offered Himself for my sake, to the tribunal of God, and has removed all curse from me, to come as judge from heaven: Who shall cast all His and my enemies into everlasting condemnation, and shall translate me with all His chosen ones to Himself into heavenly joys and glory.

A soul-searching question and a bold answer.

Would it not be more proper at this point to ask ourselves. Is it my comfort that Christ is coming again as righteous judge? Do I daily look with up: lifted head for my Lord’s return? Do I so live in that consciousness which determines all my ambitions, all my thoughts, words, and deeds in my family, in my daily affairs, and among my associates?

“In all my sorrows and persecutions.” I do experience sorrows intermingled with my joys, but do I suffer persecution? Is my walk as pilgrim and alien in this present world of such a nature that I am reproached and hated by the world? Is it not all too true that I often deliberately avoid the opposition of the world and invite the favor of evil men? Do I likely adopt more questionable practices of the world than I myself realize? Does the sin that wars in my members grieve me so much that I daily long to be translated with all God’s saints to Himself into heavenly joy and glory?

“His and my enemies.” I do have enemies. Round about me I also see the enemies of Christ, of His cross, His Word, and His saints. But do I generally regard God’s enemies as mine and my enemies as His?

Yet I would not want to change one word of this question nor of its answer. Although sin still wars in my members and my flesh clings to this life, according to the new man in Christ I do heartily agree with both the question and the answer, and I breathe a prayer that I may learn to make this confession more perfectly my own from day to day.

I do experience sorrows. Many sorrows. I have a struggle against sin. I am daily disgusted with my depravity. I live in an awareness of persecution, even of trying experiences in this world of wicked men. I do hate those who hate God. They are my enemies. I am a stranger here, even as my fathers were. I do consider heaven as my home, so that with uplifted head I long to be delivered from this body of sin and death, to be with the Lord, and to worship in the beauty of holiness, without the hindrance of this body, fully devoted to the praise of the glory of the Father in eternal perfection. I do, indeed, look for the same Savior Who atoned for me on Calvary to declare me righteous in Him, and Who now assures me of that righteousness by His Spirit in my heart.

I join the church of all ages with the confession, I believe in Jesus Christ, Who is coming again to judge the quick and the dead.

“To judge the quick and the dead.”

We can appreciate the fact that Scripture speaks of a final judgment, the culmination of the curse that rests upon all men since the fall in paradise. How thankful we can be that God does not postpone judgment, that He does not temporarily ignore our sins and the sins of all mankind, now showing a certain grace or favor to all men which ultimately will be changed to wrath and condemnation! Jesus did not come to condemn the world, for the world already lay under the condemnation of the living God. Election and reprobation are carried out throughout history. “The curse of the Lord is in the house of the wicked, but He blesseth the habitation of the just” (Prov. 3:33). “He that believeth on the Son hath (not, will have, but hath) eternal life, and he that believeth not the Son shall not see life; but the wrath-of God abideth (even now) upon him” (John 3:36).

God judges the wicked every day. He implants in them an undeniable awareness that He is God, and He alone. He manifests before their consciousness every day and every night His almighty power in the windows of the heavens, in the wonders of the sea, in the wonders of animals, plants and flowers, in the raging of the storm, the rumblings of earthquakes, and all the manifold works of the Most High in all His creation. All idols are but a sham, the inventions of men. It is the wicked rebellion of the human heart that rejects God, bows before idols, speaks of evolution over a long period of time, or of laws of nature that operate apart from God. No one can ever make the excuse that he did not know. God even places the sinner under the proclamation of the Word, even as He did with Pharaoh, with Nebuchadnezzar, with, Herod and Pilate, ‘and with many others. God demands repentance, for no man has the right to defy God and transgress His commandments. Why else would the wicked go about cursing the God of heaven? Why do so many put on a pretense of sorrow and repentance, as Ahab did, when they become aware of His judgments? By the clear and powerful testimony of the Almighty the hearts of wicked men are hardened, until the whole world reaches the horrible state of which Revelation speaks, “And they repented not!” No one will ever be able to deny that God is just in all His judgments.

God also judges His people every day. The Word of God is a savor of life unto life as well as a savor of death unto death. It is foolishness to those perishing, but it is the power of God unto salvation to all who believe. The preaching of the Word is the, chief key of the Kingdom, opening and closing its portals. Christ, the Sentinel, exercises that key, declaring through His Word who will enter and who will not, banning those who because of their sins have no right to enter in, drawing His own unto Himself on the basis of His atoning blood, and making them fit citizens of the kingdom. Every day we stand before the tribunal of the living God. Far be it for us to say that God loves us as we are in ourselves, wicked sinners, who transgress all God’s commandments and keep none of them. “If thou shouldst mark transgressions, Lord, who could stand?” We confess with David, “The sorrows of death compassed me, the pangs of hell gat hold upon me: I found trouble and sorrow.” To which we add, “Then called I upon the name of the Lord, O Lord, I beseech Thee, deliver my soul.” Only then do we hear the voice of Jesus speaking through His Word and Spirit, Go in peace, thy sins, though they are ever so many. and so great, are forgiven thee. God declares us righteous in Christ on the basis of His atoning blood even now. What a comfort that has been for the saints of all ages!

From this it follows that there will be a final judgment at the end of time. Matthew 24 speaks of the signs of Christ’s coming and of the end of the world. The gospel will have been preached to the ends of the earth, and the last elect saint will have been gathered in and prepared for glory. The apostate church, the harlot, will have instigated the antichristian world power to sit on the throne as if he were God. For a short time God gives both of them over to their evil devices, so that they gloat of having disposed of God, His Christ and His church. In their bitter hatred against God and against their fellow men they have subjected all creation to their selfish ends, with the result that they have corrupted and polluted the air, the soil, the rivers, streams, and lakes, and even the seas. When God pours out His vials of wrath, the nations arise in warfare against each other in the great battle of Armageddon. They are infuriated against the anti- Christian world power and the harlot for having deceived them into believing that they were invincible. They are enraged against God Who has brought total disaster upon them and shattered their fondest hopes. What actually happens is that Christ, the Lord of lords and King of kings, has brought to a climax the battle of the ages against Satan and all his cohorts, has brought them into a state of total bankruptcy by their own sins, has cast them into utter frustration, and is now ready to declare His victory over them and judge them according to their just deserts (Rev. 19:11-21).

The sign of the Son of man appears, likely as a visible appearance of the Lord of Glory in all the glorious majesty of His exalted position as Lord over all at the right hand of the Father. The saints will be raised and will be gathered unto Him before the eyes of the whole world. They will not experience the final outpouring of the vials of wrath, because they will be taken away beforehand, even as Noah, was taken with his family into the ark, and as Lot was brought out of Sodom before the judgment of the Lord descended on the earth. (See also Isaiah 57:1; Matthew 24:22.) When the sign of the Son of man appears the wicked will be filled with terror and will cry to the rocks to cover them and to the mountains to hide them from the face of Him Whom they have rejected all their lives with all their, evil deeds.

Christ will then come with the millions of His saints of all the ages and with all His holy angels like a mighty, triumphant army to judge the earth in righteousness. The judgment seat will be set up. The Judge of heaven and earth will sit in judgment.

Blessed expectation! That very same Jesus Who before offered Himself for my sake to the tribunal of God, and has removed all curse from me, will be my Judge. We must all appear before the judgment seat of Christ to carry away the deeds done in the body, whether good or evil. Every sinful desire, thought, word, and deed will pass in review before our consciousness. Just as a play back on a TV set, so in far greater accuracy every moment of our lives will be exposed before our conscience. We will stand condemned as never before. Yet, by the wonder of grace, we are forgiven! We are forgiven by Him Who sits in judgment over us! The same Savior Who died to atone for our sins on Calvary will not declare us righteous and worthy of eternal life on the sole basis of His merit. All of our works will be burned like straw and stubble, so that nothing remains. All of Christ’s work in and through us will be the basis for our reward in heaven. Each of us will receive his own crown and with it his own position according to the gifts and talents entrusted to him, that he may fully live to the glory of his God.

We will be vindicated before our enemies. All the enemies of Christ, which are also our enemies, will be condemned to their own place in torment of hell.

Finally, united with the whole family of God, we will experience the rich and glorious promise, “I will be your God, and ye shall by My people” forever and ever! Praise be to His holy Name! 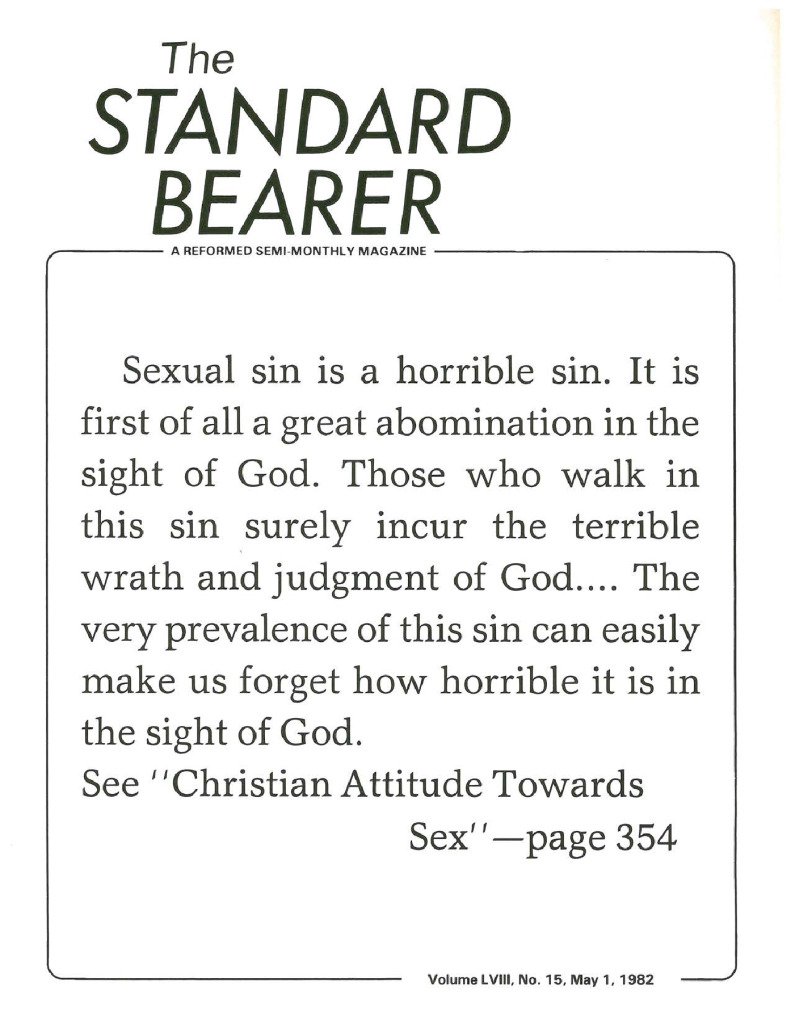