The Fearful God Who Forgives Our Sins

The Fearful God Who Forgives Our Sins

Arie den Hartog is pastor of the Protestant Reformed Church of Randolph, Wisconsin.

What a wonderful blessing is God’s forgiveness! It is really the basis for all the other blessings of salvation which the Lord in His grace bestows upon us. Because He is a God Who forgives, there therefore He did not impute our trespasses unto us, and reconciled us to Himself through the cross of the Lord Jesus Christ. Though we are by nature guilty and damnworthy sinners, He counted us perfectly righteous because of the sacrifice of His only beloved Son. There is therefore now no condemnation to them that are in Christ Jesus. Truly blessed is the man whose transgression is forgiven, whose sin is wholly covered in the sight of God, and to whom the Lord doth not impute iniquity. Because of the wonder of God’s forgiveness, He daily restores us in His loving kindness, and cleanses us from all our sins in His great mercy. Though we have sinned a thousand times, yet when we confess our sins before Him He freely in mercy forgives.

Today the truth of the forgiveness of God has been greatly cheapened and corrupted. Men lightly regard it. Men lay claim to it when they have no right to do so. Ours is an age of superficiality, when there is little fear of God. We witness this particularly in the great scandals that have recently been committed by some of the great televangelists and politicians of our land. These scandals are not of such a nature that they are a momentary lapse into sin because of a man’s weakness but are in fact great schemes of wickedness perpetuated over long periods of time and involving elaborate networks of deceit and corruption. Yet those who publicly commit such great evil glibly claim that God has forgiven them. Meanwhile they continue in their sin and wickedness without the least sign of genuine humility and repentance before God. How dreadful all of this is, and what a blasphemy against the holy God. How can men who do such things still be imagined to be the great Christian leaders of our day? What a perverted age we live in!

Woe unto the Christian who lightly regards God’s forgiveness. May we never imagine that God’s free forgiveness is reason for us to be careless about our sin and continue in that sin without repentance.

There are several reasons why the truth that God forgives is reason for us to fear Him greatly. First of all, the sovereign prerogative to forgive sins belongs to God alone. No mere man can forgive sin, but God only. Let no man quickly boast that God has forgiven him. To God belongs the sovereignty to judge one man for his sin and to condemn him to everlasting hell, and none shall be able to acquit. While on the other hand He declares another righteous and makes such a one the object of His everlasting favor and blessing. The saints of God can confidently say: “Who shall lay anything to the charge of God’s elect? It is God that justifieth. Who is he that condemneth?”Romans 8:33, 34.

God’s forgiveness is so fearful because it is made according to the standard of His own perfect and infinite holiness and righteousness. As the holy God He is too pure of eyes to behold iniquity. In all His judgment, the Lord judges righteously. He never calls that which is evil good nor that which is good evil. Furthermore, the Lord knows the heart of man altogether. He does not judge on the basis of mere outward appearance. He does not see as man sees. He will not forgive the sin of the wicked hypocrite who in his heart remains impenitent and ungodly.

We must fear the Lord Who forgives us because of the greatness of our own sin which the Lord in mercy forgives. Anyone who glibly claims the forgiveness of God while belittling his own sin is deceiving himself, for, in fact, the wrath of God abides on him. God’s forgiveness is so fearful because our sins are so great and so many. Forgiveness is such a fearful thing because our sins are against the holy majesty of God. They are a denial of the sovereign right of the Lord to rule over us and to require of us obedience and love to Him. The greatness and wonder of God’s forgiveness is seen against the background of the awful judgment of hell that our sins otherwise deserve before God.

There is one reason greater than all why God’s forgiveness ought to make us greatly fear before Him. The forgiveness of God was purchased at an exceedingly high price. It was purchased and accomplished at the cross of His only beloved Son Jesus Christ. God’s forgiveness of the sins of His people could only become a reality through the horrible bitter anguish and suffering which our beloved Lord endured in the hours of darkness on the cross, when He cried in the midst of the torments of hell: “My God, My God, why hath Thou forsaken me?” Never before or after did such a terrible agonizing cry rend the heavens and go up unto God the Father. No one will ever be able to imagine, much less describe the infinite greatness of the price of suffering anguish which our Lord had to endure so that our sins could be forgiven by the Holy God of heaven and earth. No one shall be able to measure the breadth and length and depth and height of the love of Christ which caused Him to endure the cross in order that our sins might be forgiven. Never may the Christian forget the amazing wonder of the cross. Again and again the Scriptures set before us the cross in its horror and also in its wonder and glory. In order to remember this cross, our Lord also told His church repeatedly to observe His holy sacrament of the Lord’s Supper. No one who stands before the cross and truly understands its meaning can ever lightly regard God’s great wonder of the forgiveness of sins.

The Christian does fall into sin. He even something falls into the most grievous and terrible sins. The Christian still often falls into sin. It is even possible that the child of God can continue for a long time in his sin without repentance. He can live among men as a hypocrite for a long time. We have the fearful example of king David who committed the awful sin of adultery and then of murder. David has given us a number (of vivid descriptions of what an awful experience that was. Though he for a short time enjoyed the pleasures of sin, he was soon smitten in conscience before the Lord, and experienced the heavy hand of the wrath of God upon him. It was this that finally caused him to cry out of the depths of his sin and misery unto the Lord. It was the fear of God that made David finally confess his sin in deepest humility and sorrow before God. Surely he did not belittle the awfulness of his own sin, but cried out in amazement, “Behold I was shapen in iniquity and in sin did my mother conceive me,” Psalm 51:5. When David had come to know the awfulness of his own sin, he pleaded for the mercy of God. He was profoundly conscious that because he deserved the judgment of God, his only hope was in the sovereign mercy of God. After David had confessed his sin, he did not boldly continue in that sin. He desired to be wholly cleansed from all his sin and iniquity. He knew that because his sin was so great and because ii: came forth from his own corrupt and sinful nature, only God could deliver him from it. He greatly feared lest God should take His Holy Spirit from him. He desired to walk uprightly before God and not to continue in sin, but he knew that he would be able to do this only by the Spirit of God. He did not continue to enrich and aggrandize himself nor glory in himself and portray himself as a great man in Israel. He humbled himself to the dust, considering himself wholly unworthy before God and man. He desired only to speak of the mercy and justice of God, and glory in His righteousness. These are the marks of the truly penitent child of God who has fallen into sin. The modern day so-called penitents bear no resemblance to David. The difference is that David lived in the fear of God. 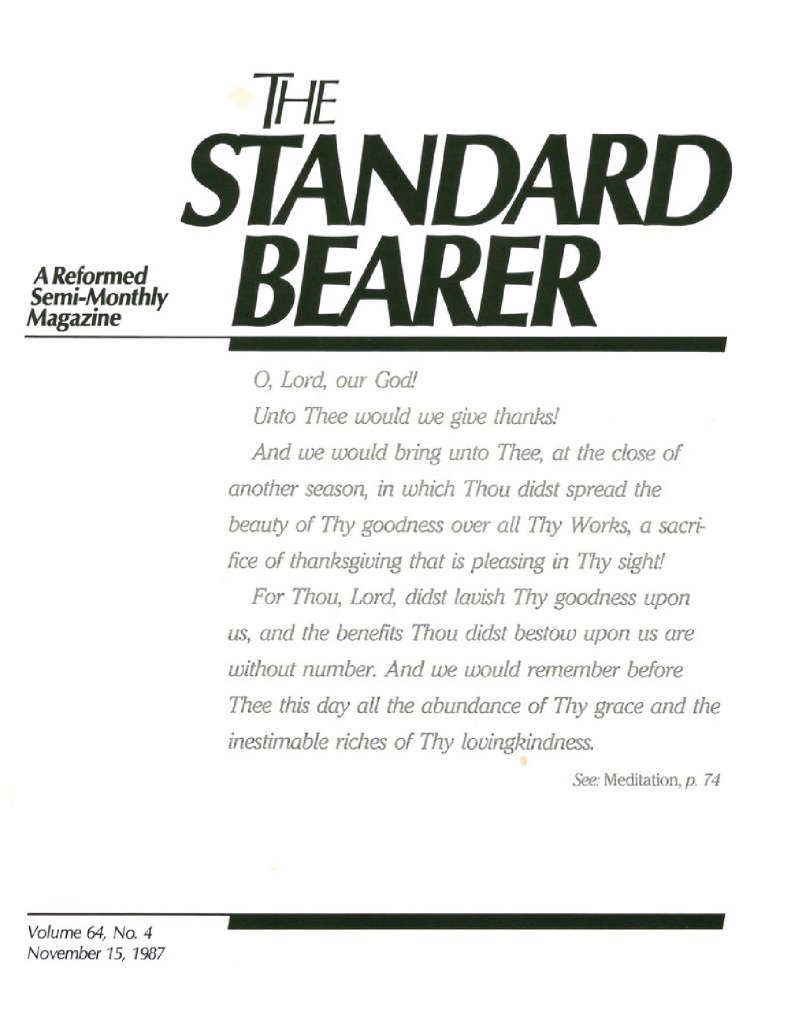