The Falling Away of Unbelievers

The Falling Away of Unbelievers

“(For it is impossible for those who were once enlightened, and have tasted of the heavenly gift, and were made partakers of the Holy Ghost, and have tasted of the good word of God, and the powers of the world to come, if they shall fall away, to renew them again unto repentance; seeing they crucify to themselves the Son of God afresh, and put him to an open shame. For the earth which drinketh in the rain that cometh oft upon it, and bringeth forth herbs meet for them by whom it is dressed, receiveth blessing from God: but that which beareth thorns and briers is rejected, and is nigh unto cursing; whose end is to be burned. “

The perseverance of the saints!

One of the most blessed truths of the Holy Scriptures!

Contrary to the abominable philosophy of Arminianism, which teaches that one can be saved today, and fall from grace tomorrow, the Word of God throughout proclaims the comforting truth that he who is once saved is saved forever. It is only the unbeliever who can fall away. And he can do that only when he is born and reared within the boundaries of the church institute and the organic, historical development of the covenant as it is realized in the generations of the believers and their seed.

This is undoubtedly the gist of the truth that is set forth in the text to which our attention is now directed.

The writer of this epistle would have his Christian readers make progress in the doctrine of Christ. He laments the fact that they had been dull of hearing; that they were able only to drink milk, when by this time they ought to be eating strong meat. They should be leaving the first principles, and going on to perfection. But the latter is possible only if God permit. The writer of the epistle surely expected that God would bless his efforts in instructing the Hebrew Christians, and that God would give the readers of the epistle grace to respond to that instruction; but he was also fully aware of the possibility that with regard to some God would not permit. And he explains this in our text, as is clearly indicated in the little conjunction “for”.

Unbelievers, according to God’s intention, will fall away!

But are not those described in the text believers? Indeed, they are, says the Arminian. He maintains that if there is any passage in Scripture that teaches the falling away of saints, this is it. And if you look at this text superficially, so it may appear.

They of whom the writer of this epistle speaks are evidently those who live within the sphere of the Christian Church. They undoubtedly are born in the Christian home. They in their infancy receive on their foreheads the sign of God’s covenant in baptism. They receive Christian instruction in the home, in the church, and possibly even in the Christian school. They are catechized in the Christian religion, and are thoroughly acquainted with all the doctrines of Scripture. When they come to the years of discretion, they make public profession of their faith. They partake of all the rights and privileges of the church. They sit at the table of communion and partake of the organic life of the church, attending societies for Bible study, participating in the Sunday School, first as students, then as teachers. They go by the name of saints. If they walk circumspectly enough, they are held in esteem, are honored among the membership. They may even be voted into office, becoming elders or deacons. If they have exceptional talents, they may even be sent off to school to prepare themselves for the office of the ministry.

Such are they who are described in the text!

They appear to, have all the ear-marks of believers!

They have tasted of the heavenly gift. This cannot mean the grace of the Holy Spirit, the Giver of all the graces in Christ; for then surely they could never fall away. But this heavenly gift undoubtedly refers to Christ. They have met Him either personally in the flesh, or in the Word as it was preached to them. They know who He is, what He is, and what He does. Remarkably the text does not say that this heavenly gift tasted good to them, which you would expect if they were believers. They were made partakers of the Holy Ghost. Again, it is certain that they did not partake of Him as children of God; for then they would be regenerated and saved. But they partook of Him in the sense of His power, whereby there were given wisdom and prudence in things natural, civil, and religious. They partook of the Spirit of the office, and had the experience of king Saul, upon whom the Spirit of God came to fulfill the duties of his office, but which Spirit was taken away from him and given to David, a man after God’s heart. They were empowered to work miracles, to prophesy, to speak in tongues. They were like Judas Iscariot, one of the twelve, to whom Christ gave power against unclean spirits, to cast them out, and to heal all manner of sickness, and all manner of disease, and who, no doubt, returned, as the seventy later did, and said: “Lord, even the devils are subject unto us through thy name.”

They have tasted of the good word of God, and the powers of the world to come. That is, they were thoroughly acquainted with the contents of the Word of God as that Word had been preached to them. They may very well have told the faithful preacher after the service that he had a very good Reformed sermon. They may even have had a certain temporal pleasure as they heard in the preaching the promises of God concerning the future age. They understood intellectually what constituted the hope of the Christian, so that they were capable of telling others of it.

Yet, all the while, they are but mere natural men.

They are not regenerated, born again from above. They are not justified in the blood of Christ. They are not cleansed by the blood of Christ of which the water of their baptism spoke. They have no grace, and therefore have no saving faith. The love of God has not been shed abroad in their hearts. They have never experienced the saving, efficacious calling of the Holy Spirit through the preaching of the Word. They are dead in trespasses and sins, incapable of doing any good, and inclined to all evil. Indeed, they are but mere natural men.

And they fall away!

The translation makes it conditional, but the original text states the fact: “and falling away,” or better still, “are fallen away.”

But how can one fall away who evidently never stood? And we reply, surely they never stood in the faith which was once delivered unto the saints. Had it been true that they stood in that faith, we repeat, it would be utterly impossible that they should fall away from it. Once one is established in that faith, he remains standing. He cannot fall away. That does not mean that the true believer cannot and perhaps often does waver in his faith. Every true believer readily confesses that he has his moments of doubts, and that these doubts arise from his infirmities. The apostle Peter is a good example of not only the possibility of a believer’s fall, but also of how awfully far he can fall. But, as in his case, so is there repentance, and return. The believer can fall, but he cannot fall away. Only the unbeliever can, and when he dwells in close proximity to the church and the means of grace does he always fall away. In that sphere the unbelievers for a time stand, that is, they participate in all the things the church has to offer. They come regularly under the means of grace, the preaching of the Word and the sacraments. The difference between them and the believers is that they have no grace. From that sphere therefore they eventually fall away, i.e., they turn aside, and wander away. And their fall is devastating!

Mark how the text describes their fall. It is impossible to renew them again unto repentance, seeing that they are crucifying the Son of God afresh, and exposing Him to public shame. Not, you understand, on the cross once more; for Christ suffered on the cross once for all; He cannot be crucified again. But the text emphatically stresses the fact that they crucify Him to themselves. Which means that they openly repudiate Him, and ridicule Him as He had been presented to them in the preaching of the Gospel as they had once clearly, intellectually come to know Him.

But how could this happen? What could possibly be the cause for this awful end?

This is explained in the last part of the text: “For the earth which drinketh in the rain, etc.”

An illustration is taken from nature.

It demonstrates how God also operates in the realm of grace.

God sends His rain in sufficient supply to make the green herb to grow for the one who tills the land; and so there is bread for the sower and eater. However, that same rain descends on the thorns and briers, and causes them also to grow. The latter are not for human consumption, but to be rejected, pulled up, and destroyed.

What takes place all the time in creation also takes place in the sphere of the church, where God causes the Word of the Gospel to be preached. The same rain which, on the one hand, caused the green herb to grow for food to the sower, on the other hand, also causes the obnoxious weeds to grow, which have no other end than to be destroyed. So in the sphere of the church as it comes to manifestation in this world, God causes the blessed Gospel to be proclaimed. That Word, under the blessing of God, causes the believers to come to the saving knowledge of their salvation in Christ; while, on the other hand, it brings to manifestation the unbeliever who through the same Word is made ready for his destruction. This truth is abundantly demonstrated in Scripture, which repeatedly declares that the Word of God is both a savor of life unto life as well as a savor of death unto death. The emphasis does not fall on the power of man to accept or reject, as the proud doctrine of Arminianism would maintain; but on God, Who saves His people and works out in them His saving grace; and rejects the ungodly, working out in them reprobation, and that, too, by the very same means — the preaching of the Gospel.

So, indeed, would the writer of the epistle, under the blessing of God, bring the saints from the first principles unto perfection. Where God does not bless with His saving grace the means, there must of divine necessity be a falling away of unbelievers. 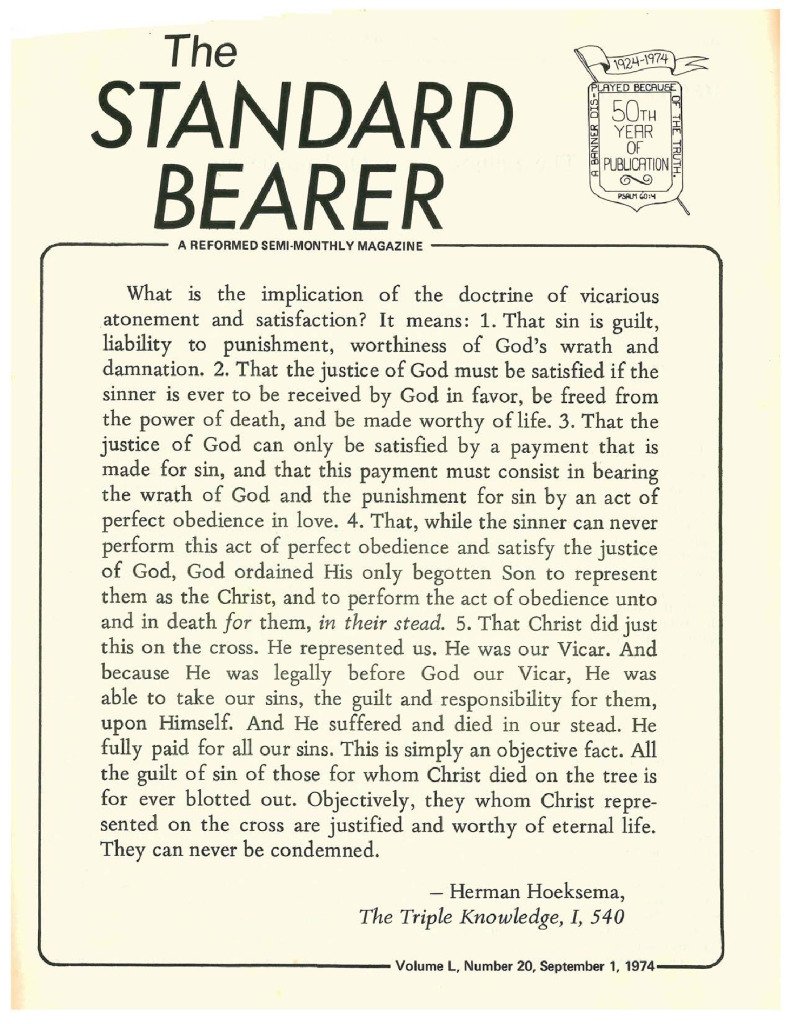