The Evangelical and the Reformed Church (6)

The Evangelical and the Reformed Church (6)

I hope that the importance of the fact which I am trying to accentuate and bring to the foreground, namely, that not a single voice of protest was heard at the General Synod of the Reformed Church in the United States against the merger as proposed in the Plan of Union, is clearly understood.

For this point is, indeed, of cardinal significance.

Unless those brethren in the Evangelical and Reformed Church, formerly of the Reformed Church in the United States, that are dissatisfied with the doctrinal principles and church political setup of the united church, do not go back to that Plan of Union to attack it, they virtually have no right to voice their protest now against the basis of agreement that is reached in harmony with the principles expressed in the Plan of Union.

Such voices are, indeed, heard.

Though at the General Synod of 1934 there were no protests against, or expressions of disagreement with the proposed Plan of Union, there were some overtures that voiced certain doubts and fears as to what would become of the Reformed Church, and the principles of Reformed truth in the merger.

There were overtures “from Synod of the North West and Sheboygan Classis requesting the General Synod to attend to it that in the Evangelical and Reformed Church the Heidelberg Catechism be retained for the former Reformed congregations as heretofore/’ And there were “identical overtures from Minnesota, Ursinus and Eureka Classes, asking certain permissions with reference to ministers, missionaries, the Mission House and the Presbyterial form of government.” All these overtures were referred to the “Committee on Constitution.” (An Examination and Criticism, p. 94).

Several voices of protest were raised against the Constitution that was to be proposed as soon as it became known what the “Committee on Constitution” was planning to propose. Much of this disagreement concerns changes in the form of government, with the details of which we shall not weary the attention of our readers. More to the point is the protest raised against the proposed Constitution from a doctrinal viewpoint.

Dr. K. J. Stuebbe protested against the subordinate place assigned to the Heidelberg Catechism in the proposed Constitution. Indignantly he writes: “Where have we come to? That confession which always was the pride of the Reformed Church, and for which many willingly gave their goods and their blood, must now be satisfied with a very modest mention in a footnote! No, friends, we do not want the Heidelberg Catechism mentioned only in a footnote, but we do want it placed into the Constitution itself as our standard, expressing the truths taught in the Scriptures. We are not satisfied with only a ‘reflection’ or something to show the ‘historical background,’ but we want a foundation for our faith to rest upon! At the time of our ordination we solemnly vowed that we would faithfully teach and defend the doctrines contained in the Heidelberg Catechism, and we expect to be faithful to that vow. We demand that our Confession be preserved for us. Why are we so insistent? Simply because we are convinced that this precious heritage has been taken from Scripture and that it leads into the truth as revealed in Scripture. Such a Confession must be known, understood, believed, cherished and protected in order to abide in the paths of righteousness, and to walk in the fear of the Lord. Our Catechism does not limit, constrain or narrow revealed truth, but it acts as a barrier for all members of the Church. A theologian pledged to such a standard is prevented from breaking down all the fences, and from running unconstrainedly into the fields of wanton philosophy. The teachers of religion, as well as all members of the church, are by such a standard compelled to confine their activity of thought, reason and research to the only source of true theology and knowledge—the Word of God—and thus they are prevented from confounding revealed truth with doctrines of the flesh.” (An Examination and Criticism, pp. 30, 31).

Let it be clearly understood that we are not criticizing brother Stuebbe, whom we met at our conference, and there learned to know as a brother that is seriously concerned about the condition of his Church, for these words as such. On the contrary, we appreciate that he insists on a sound doctrinal basis for the Church in the world, and on maintaining our Reformed heritage.

But we do insist that there is no room for this criticism, unless the brother first repudiates the Plan of Union on the basis of which the merger was accomplished in 1934.

Yet, this is apparently not the intention.

In the same booklet from which we quoted the above, the Rev. E. Buehrer writes: “When the merger of the two Churches was effected, it was on the basis of the Plan of Union and in this plan the merged Church was guaranteed certain rights and privileges. It was expected that the new constitution would recognize these guarantees and would be framed accordingly, but to our sad disappointment, the. . .Committee on Constitution did not abide by this Plan of Union. For this reason the clergy and the members of the Church are very much alarmed.” p. 6.

It is evident, then, that the attack is not directed against the Plan of Union, with which, besides, all had already expressed agreement in 1934.

Also Dr. Stuebbe wants to keep his stand on the basis of this Plan of Union and from that standpoint direct his attack against the new Constitution.

But is this possible, as far as the doctrinal standard is concerned?

Does not also Dr. Stuebbe, as long as he does not repudiate the whole Plan of Union, agree that the Reformed Church in the United States and the Evangelical Synod of North America, as they existed before the merger, are in agreement “on the essential doctrines of the Christian faith and on the ideals of the Christian life as contained in the Old and New Testaments and as defined in their respective standards of doctrine”? Does not also he, on the basis of this Plan of Union “accept the historical confessions of the two Churches as the doctrinal basis of union”? And does this not imply that not only the Heidelberg Catechism, but also the Augsburg Confession, and Luther’s Catechism, are accepted by him as the doctrinal basis of the merged Church? How, then, could it be expected on such a basis that the Heidelberg Catechism would occupy any other than a subordinate position as a basis of communion in the merged Church?

On p. 31 Dr. Stuebbe writes: “The passage which in fact overthrows all Reformed doctrine, and makes all of item 3 void, is the last sentence of the second paragraph. There we are told: ‘In these statements of faith, ministers and members are allowed liberty of conscience whose final norm is the Word of God.” But was this not already the basis of the Evangelical Synod before the merger? In regard to those points of doctrine in which the Heidelberg Catechism, the Augsburg Confession, and Luther’s Catechism do not agree, the Evangelical Synod adhered “strictly to the passages of Holy Writ bearing on the subject, and avails itself of the liberty of conscience prevailing in the Evangelical Church.” (Evangelical Catechism, p. 69).

Now, the proposed Constitution, no doubt, opened this door of the liberty of conscience much wider.

But principally this makes no difference. As long as Dr. Stuebbe does not completely disavow the Plan of Union, he agrees that liberty of conscience may be allowed with respect to the points of difference between the Reformed faith and Lutheranism.

And this makes it impossible to protest and effectually take action against the merger as it was finally concluded.

Hence, the brethren that are not agreed with the union, and that want to maintain a definite, Reformed basis of fellowship, are obliged to admit that they erred when they agreed to the Plan of Union, must radically break with its pernicious declarations, repudiate its stand:, protest against it, even at this late date, and break away from the merger to organize again on a separate, Reformed basis. 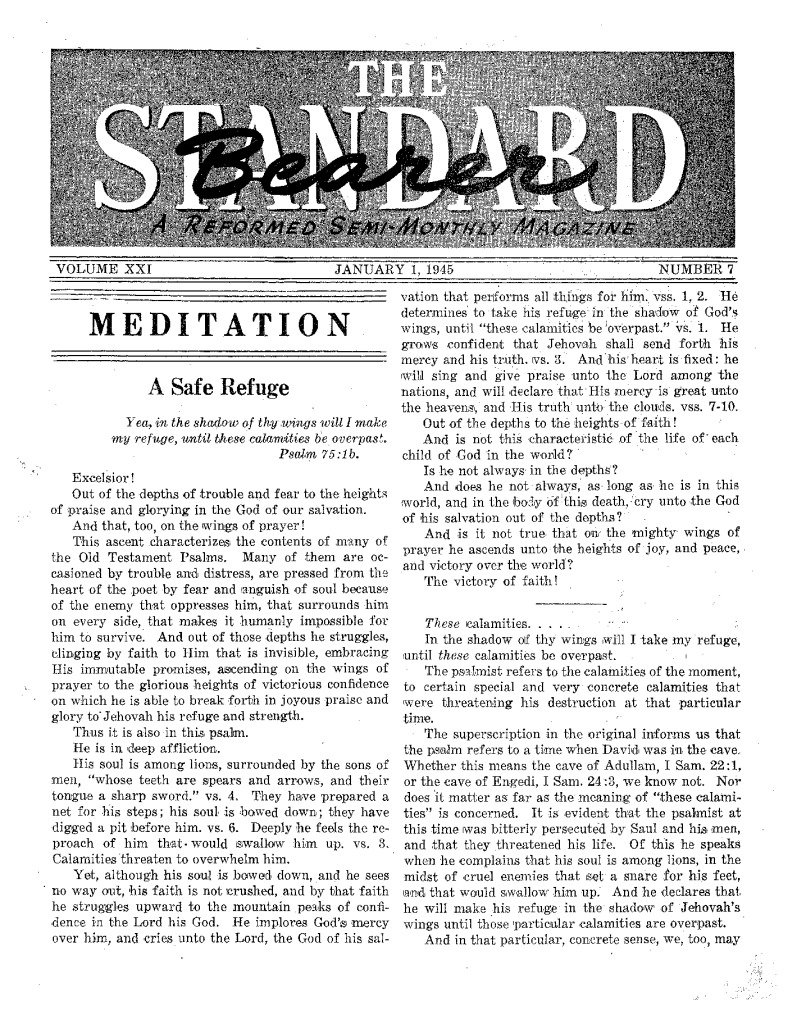