On May 17, 2019 the U.S. House of Representatives under the leadership of Speaker Nancy Pelosi passed, 236-173, H.R. 5, titled the “Equality Act.” This piece of legislation, a priority for Speaker Pelosi and her party, would, if it becomes law, expand protections against discrimination in the USA by amending the Civil Rights Act (1964), which outlaws discrimination based on race, color, religion, sex (gender), or national origin. The “Equality Act,” which, by passing the House (something it was not able to do between 2015 and 2019), has taken one more step toward becoming federal law, would add the words “sex (including sexual orientation and gender identity)” to the text of the Civil Rights Act (1964), so that “LGBTQ Americans” would also enjoy protection from discrimination.

A number of provisions in this bill are troubling. First, while Christians oppose discrimination and support the equal and equitable treatment of all people, this legisla­tion places “sexual orientation and gender identity” in the same category as “race, color, and sex” (that is, gender). Race, color, and gender are immutable and amoral, that is, whether a person is white, black, Asian, European, Af­rican, oriental, male or female is of no moral significance. In addition, those characteristics cannot be changed. Sex­ual orientation and gender identity, categories that the Bible does not even recognize, are moral issues. Sexual attraction to and sexual activity with someone of the same gender is sin, which every faithful Christian and church recognizes and has understood for the last 2,000 years. A person who identifies as a different gender than his/her birth gender, and behaves in accordance with his/her pre­ferred gender and not with his/her actual gender, is not only confused and deluded, but he/she rebels against God. If the law conflates these two things—race/color, which has nothing to do with morality, and sexual orientation/ gender identity, which is a moral issue—those who hold to traditional moral values (that is, conservative Christians, and to a lesser extent, conservative Jews and Muslims, as well as secular people who do not follow the “LGBTQ” agenda) will be categorized as racists. Since a racist is rightly held in execration in modern society, a homophobe or transphobe, words used increasingly to describe those who espouse traditional values on marriage, sexuality, and gender, will be increasingly vilified, and soon with official, legal approval.

Second, as with much legislation passed even by well-meaning legislators—who wants to be discriminatory against people; who does not want to help people who cannot access the services that they need; who really thinks that people should be refused service in restau­rants and other public locations?—the wording of the Equality Act is needlessly broad and vague requiring interpretation by the courts. The Equality Act forbids discrimination in the following places:

What constitutes a “public gathering”? What is a “service provider”? If a transgender person, a man identifying as a woman, arrives at a shelter for wom­en, will he be told to go to the men’s shelter or given accommodation with the women in the women’s shel­ter? If a transgender teenager, a girl identifying as a boy, enrolls in a public school, will she be permitted to use the restroom, changing room, and shower facilities with the boys, or will she use the girls’ facilities in ac­cordance with her biological gender? If a transgender person is sentenced to serve time in a federal prison, will a man identifying as a woman be incarcerated with female inmates in deference to his “gender identity” but with disregard for the safety of the biologically female prisoners? Given recent precedent, the answer to these questions is not difficult to find.

Third, and most serious of all, the Equality Act makes little to no provision for religious exemptions. Why should it—are religious people free to be rac­ists? If in the opinion of supporters of such legislation, discrimination on the basis of sexual orientation and gender identity is akin to racism, why should religious people be free to discriminate? The Equality Act spe­cifically states, “The bill prohibits the Religious Free­dom Restoration Act of 1993 from providing a claim, defense, or basis for challenging such protections.” The bill also “allows the Department of Justice to intervene in equal protection actions in federal court on account of sexual orientation or gender identity.” The Equality Act would, if it became law, put more pressure on small business owners—bakers, florists, photographers, and others in the wedding business—to violate their beliefs about marriage, sexuality, and gender. It will not take long for legal pressure to be placed upon churches, religious schools, and religious colleges, especially those that receive federal funding. And why should such “homophobes and transphobes” have tax-exempt status?

Law professor at Virginia University, Douglas Lay- cock, himself a supporter of same-sex marriage, but also an advocate of religious liberty, explains to Nation­al Review:

[The Equality Act] goes very far to stamp out religious exemptions…. It regulates religious non-profits. And then it says that [the Religious Freedom Restoration Act] does not apply to any claim under the Equality Act. This would be the first time Congress has limited the reach of RFRA. This is not a good-faith attempt to reconcile competing interests. It is an attempt by one side to grab all the disputed territory and to crush the other side.

What exactly would the Equality Act mean for religious schools throughout the country? “The short answer is that religious schools would be heavily regulated with respect to sexual orientation and gender identity,” writes Laycock. “They would have left an array of constitutional defenses, most of which are undeveloped and uncertain at best.”

Laycock says that religious schools would probably be viewed as “public accommodations” under the Equality Act even if they refuse all federal funding. They could argue that they are covered under the existing exemption of the Civil Rights Act (section 702), but he observes that “they haven’t done well with that argument lately in the lower courts. There have not been that many cases, and the Supreme Court has not spoken; it might be more sympathetic.”

“Schools would still have the ministerial exception, which is constitutional and beyond Congress’s power to repeal. It should protect them with respect to teachers teaching a religion class, or leading chapel services, but courts have generally held that other teachers are not ministers for purposes of the exception,” he adds.2

Supporters of the Equality Act have no appetite for religious exemptions, which they fear could be misused as an excuse for discrimination. While some lawmakers have proposed legislation that includes such exemp­tions, most “LGBTQ” groups view exemptions as un­acceptable. As the advocacy group GLAAD (Gay and Lesbian Alliance Against Defamation) tweeted, “We will NEVER compromise away the protections of every LGBTQ person from discrimination in order to satisfy those who wish to use religion as a weapon for discrimination.”3

The Equality Act fails to make meaningful status/ conduct distinctions. It treats the Christian baker who objects to using her creative talent to design a same- sex wedding cake the same as an individual who would stupidly, and bigotedly, deny an LGBT person a booth at a restaurant. In short, the Equality Act equates Christian ethics with hatred and bigotry.4

While the possibility of the Equality Act becoming law is slim given opposition to the bill in the U.S. Sen­ate and the White House, leading U.S. presidential can­didates have indicated that they see the passage of the Equality Act as high on their list of legislative priorities if they win the 2020 election. President Barack Obama expressed strong support for it in November 2015, but the bill died in committee and never came to a vote on the floor of the House. Secretary Hillary Clinton’s vice presidential candidate, Senator Tim Kaine assured the Human Rights Campaign (HRC), an LGBT advocacy group, at their 2016 national dinner, that, if elected, Clinton would work for its passage, but she lost the presidential election in 2016. And more recently former U.S. vice president Joe Biden, addressing the same HRC, said about the Equality Act, if he was elected president, “It will be the first thing I ask to be done.”5 Other can­didates have expressed support for the legislation. It remains to be seen which candidate for U.S. president is nominated and then elected in 2020 or whether in the meantime, the Equality Act makes any progress in the U.S. Senate toward the president’s desk.

President Trump recently expressed opposition to the bill in its current form, although he has not indicated whether, if it passed the U.S. Senate, he would veto it. In 2000, long before he entered politics, Mr. Trump said in an interview with an LGBTQ magazine, “It would be simple. It would be straightforward. Amending the Civil Rights Act would grant the same protection to gay people that we give to other Americans—it’s only fair.” However, more recently, an official from the Trump White House stated, “The Trump administration absolutely opposes discrimination of any kind and supports the equal treatment of all. However, this bill in its current form is filled with poison pills that threaten to un­dermine parental and conscience rights.”6

As the world descends further into immoral mad­ness, given over to such by a wrathful God (Rom. 1), let us be wise as serpents and gentle as doves; let us arm ourselves with the mind of Christ to suffer for righteousness’ sake; and let us cling ever more closely to Je­sus our faithful Savior! 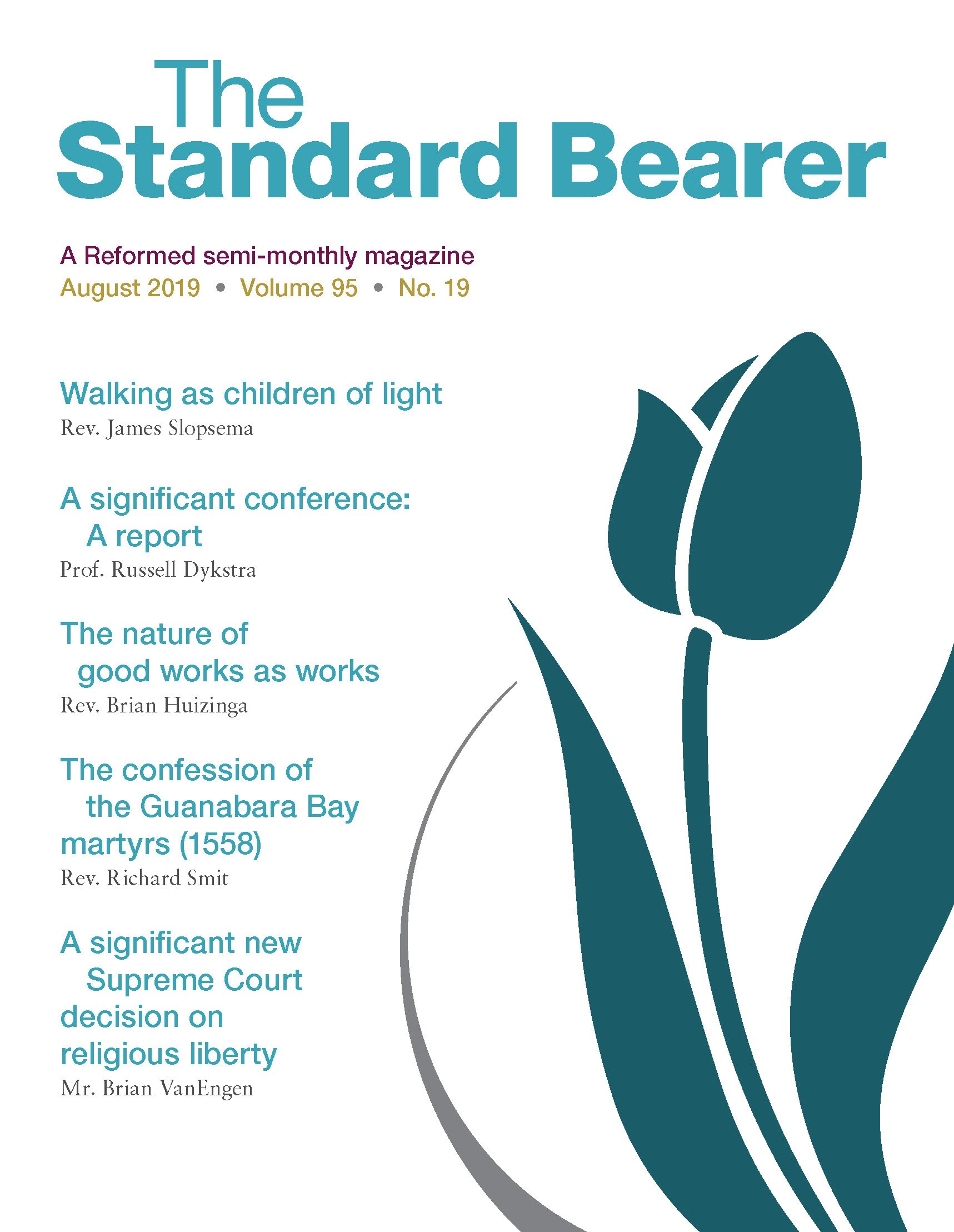