The Election of Elders. Article 22 (continued)

The Election of Elders. Article 22 (continued)

Last time we cited a few passages of Scriptures wherein are enumerated the qualifications of the officebearers of the church and, more particularly, of the elders. In “The Church Order Commentary,” Monsma and Van Dellen make the following summarization of these qualifications:

“As a general rule it may be said that the following are some of the chief requisites for a good Elder in our Churches: A thorough knowledge of God’s Word; unquestioned sincerity of heart as a professing Christian; whole hearted loyalty to the church as to its doctrinal position; exemplary conduct in everyday life; ability to instruct others; forebearance, good judgment; self-denying devotion.”

In considering the eligibility of candidates for the office, Joh. Jansen cites this three-fold requirement: (1) one must be a member of the church in full communion, (2) one may not-be under any ecclesiastical censure, silent or otherwise and, (3) one must be a male member.

These quotations are correct and wherever men may be found who answer to this description, they may be considered as eligible candidates for the office of elder. They express the substance of the Scriptural passages afore cited. The importance of this matter constrains us to look more carefully into the meaning of the two passages of I Timothy 3:1-7 and Titus 1:5-9. We quoted these passages last time. They are in many respects similarly. Both passages are rather lengthy. Instead of following the exact order of the texts, we choose to divide these various qualifications under separate headings with our comments:

a. Personal or Character Qualification

Under this heading the main term found in both passages is translated by the word “blameless” (without reproach in R.V.) although different words are used in the original. This should not be confused with “perfection.” Then none would qualify. The term denotes one that is above reproach. He is unimpeachable. There may be those who do not like him! others who speak evil concerning him as they did also of Christ, but a charge of wrong doing cannot be successfully lodged against him. He is a man of ethical repute. It is important that those who lead the church live an irreproachable life in the opinion of both Christians and those without. The general testimony concerning him is, “He is a man of integrity and uprightness.”

Closely connected with this are several other requisites mentioned in these passages. Some are positive, others negative. The elder must be vigilant, sober or sober-minded, of good behavior, hospitable, patient, just, holy and have a good report of them that are without. Negatively, “not a winebibber, covetous, striker, brawler, self-willed.”

It should be clear in this connection that the negative elements are descriptive of the works of the flesh while the positive virtues mentioned here are characterizations of the fruits of the spirit. Consequently, the fundamental personal requirement for the office is that a man gives unmistakable evidence of his regeneration through the putting off of the works of the flesh and walking in the Spirit. It must be clear that one truly loves God and the things of God. Such a man may be said to be “blameless.” He is a new creation in Christ Jesus. In Him he is above reproach. It is true that sin still attaches itself to his best deeds and he himself is the first to confess this. Such a man is personally qualified.

b. Marital or Family Qualifcations:

In this connection many questions are frequently raised. Some of these are: May an unmarried man serve in the offices of the church? May a man whose wife is an unbeliever or whose wife belongs to a different church than he serve? May one who has a son or daughter that reveal themselves as disobedient, rebellious and evil children, be considered a possible candidate for the office? The assumption here is, that such a man possesses all the other necessary qualifications. How does his marriage affect the right to office?

Scripture states that one must be “the husband of one wife, having his children in subjection with all gravity or having faithful children not accused of riot or unruly (for if a man know not how to rule his own house, how shall he take care of the church of God?)”

There are two things in this passage to consider. The first concerns the matter of marriage and the second the family. Concerning the first, the text does not exclude the unmarried from office as some seem to think. This inference is without justification. The text does not speak of the unmarried but simply sets forth the qualifications of those who are married. One feels the necessity of this by casually observing many marriages within the church in the present age as well as then. An elder must be the husband of one wife. These oft contested words have been variously explained:

(a) that they refer to a deviation from morality in respect to marriage, whether by concubinage, polygamy or improper second marriages. Many held at this time that marriage after the death of the first wife was something immoral. Although this was not the generally accepted view, even those opposing it regarded abstinence from a second marriage, as something praiseworthy and meritorious. Consequently, it was held on general principles that those who hold office in the church should not marry the second time.

(b) that they refer to contemporaneous polygamy which at that time still seemed to be quite prevalent among the Jews. “This corruption,” writes Calvin, “was borrowed by them partly from a sinful imitation of the fathers, (for they who read that Abraham, Jacob, David, and others of the same class, were married to more wives than one at the same time, thought that it was lawful for them also to do the same) and partly from neighboring nations; for the inhabitants of the East never observed that conscientiousness and fidelity in marriage which was proper. However that might be polygamy was exceedingly prevalent among them, and, therefore, with great propriety does Paul enjoin that a bishop should be free from this stain.”

(c) that they refer to successive polygamy whether after a divorce or after the loss of the first wife.

Meyer’s explanation we take to be the correct one. He states that, “there is good ground to take the expression simply as opposed to an immoral life, especially to concubinage. What Paul says then is that a bishop is to be a man who neither lives nor has lived in sexual intercourse with any other woman than the one to whom he is married.” This is also the underlying meaning of the three terms, “vigilant, sober, and of good behavior,” which follow this expression in I Timothy 3:2. Vigilant means to be calm, collected in spirit, temperate. Soberness is the state of a sound mind and the exercise of self-control. And good behavior denotes a well ordered life. Applied to marriage these terms emphasize the moral chastity of that holy state and this must be observed and practiced by those who seek the office of the church.

The text itself says nothing directly about the man whose wife is an unbeliever. It would seem that circumstances must somewhat determine the eligibility of such a man, Did his wife become an unbeliever, an apostate, while he was married to her? Was she such prior to marriage? This would make some difference. A chaste and holy marriage is only one that is consummated in the Lord. Where this is ignored the bitter consequences of sin become evident in countless ways. It would seem that one who willfully plunges into that state and joins himself with an unbeliever disqualifies himself for the office of the church. Such is not being an example. Another may have every reason to believe that he marries in the Lord, only to find later that his wife is unbelieving. He has been deceived. The fault is not his. This is a different case and to determine whether such a person is disqualified we would have to consider the matter of his rulership in his house.

The elder must be one “who rules his own house well.” The antithesis of this is not one who has no house to rule, i.e., the unmarried. Often it is presented that way. An elder must rule his house well. An unmarried man has no house to rule. Ergo: the unmarried cannot be considered for the office. This, however, is faulty reasoning. It does not follow because the antithesis in the text is the man who does not rule his own house well and not the unmarried man. The latter is not considered here at all.

The good rule of the elder in his own home consists of his having his children in subjection with all gravity; his children must be faithful and not accused of riot or unruly. This rule and subjection or this relationship of authority and obedience is reflective of a relationship in the church. For that reason one who is unable to maintain that rule in his house is also disqualified to do so in the church. There, too, the relation is spiritually that of father and children. God is the Father of His Church through Jesus Christ. And the officebearer, appointed of God, stands in the place of or is representative of God in the church. He must rule, not as lord over God’s heritage nor by constraint, but as a willing example. He must bring the church into subjection to the will of God, her Father. Doing this it is imperative that he knows how to conduct himself so that the members of the church may also in love submit themselves to his rule. They must be able to do this. They must be able to see in him the power of God. He must be a good example in all things. And this begins in the home. His wife and children must see in him a godly father.

Then it is not only possible but also very much a reality that a faithful father witnesses with grief the waywardness and disobedience of some of his children. Does that disqualify him? We say, “No.” The conduct of the children does not qualify or disqualify the father. There might be a worthless father whose children, under the instruction of the mother, grow up to be very obedient and behaved children. The fact that they are such does not qualify their worthless father to be an officebearer in the church. No more the opposite. Always there is a double seed brought forth in the historic generations of the covenant. No human rule, however perfect it may be, is going to subject the reprobate seed to obedience of love. That is impossible. The same reality exists in the church. The sole question, therefore, is whether or not the father rules well? Does he conduct himself in the home so that the children may learn to be obedient or is he, perhaps, by his negligence or evil example the cause of the children’s waywardness? If the latter is the case he cannot rule in the house of God. If the former is so, he may be considered. And the same principle applies to him whose wife departs from the faith. If it is through no fault of his that this occurs and if he conducts himself as the head of his house, an example of godliness, he may serve also in the church of Christ. 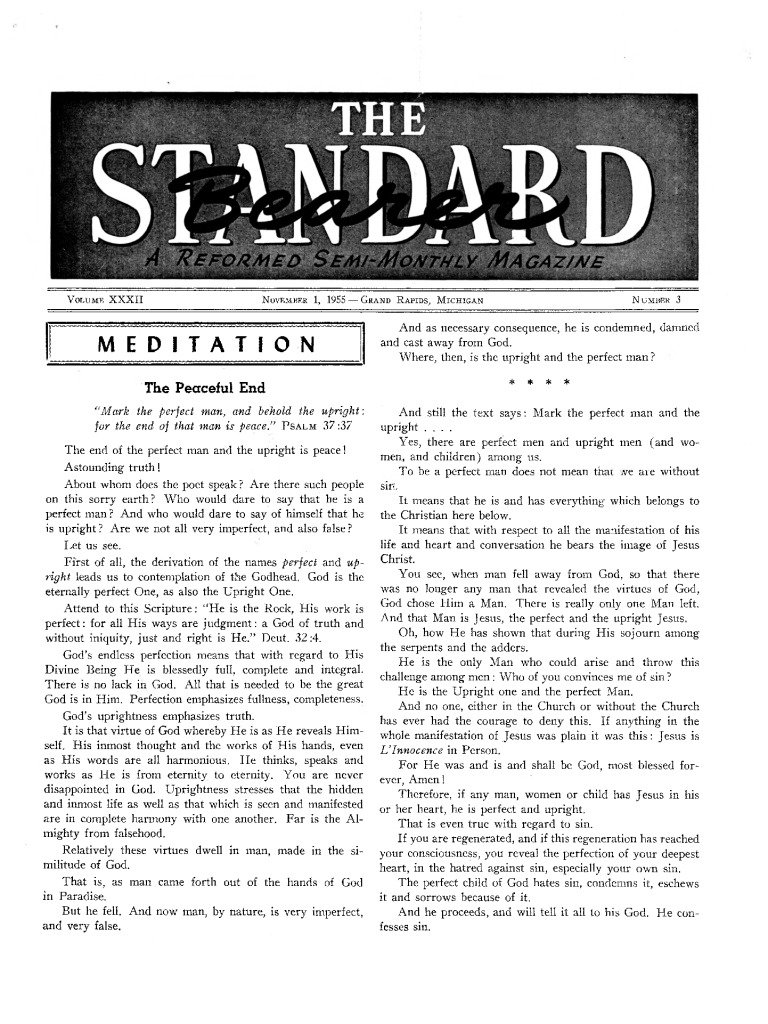