The Election of Elders. Article 22 continued

There are still many other requirements for the office of elder. Before discussing these we will digress a moment to comment upon a question which arose in connection with our former writing. The question is: “Is it proper to consider one a candidate for the office who has been guilty of some public, gross sin for which he has repented and made confession?” The elder must be blameless and have a good report of them that are without. Now it cannot be denied that the committal of such sins, even though they are confessed, leaves a mark upon the guilty one in the eyes of the community that is oft times never erased. If it is an offense that is punishable by the civil authorities, a public record of such misconduct is even kept. Sin is always a blemish, an indelible stain. When one becomes perpetrator of public wrong it is impossible to escape its stigma. From this viewpoint it could not be said that such a person is of good repute and, therefore, eligible for the office.

On the other hand, however, in the church of Jesus Christ, sin confessed is sin forgiven. And sin forgiven is sin obliterated and may, therefore, no more be used against the person who has fallen and by the grace of God been restored. It is ethically wrong to hold charges against a person for which confession has been made and forgiveness obtained. From this viewpoint it would appear that the position that declares such a person forever ineligible for the office is untenable. We think now of the apostle Peter who denied the Lord with vehement cursing. Surely a great and terrible sin this was. Yet, after the resurrection, the Lord restored him to his office.

Hence, mv personal conclusion and answer to the above question would be as follows: (1) Where there are other capable and well qualified men in the congregation, these should be given first consideration; (2) Where such a person as mentioned in the above question is considered, a sufficient period of time must have elapsed so that it may be shown beyond question that the confession of the sin is sincere and valid; (3) Where this is the case and such a person possesses the other necessary qualifications, showing himself blameless in his present walk and life, he could not be refused. An evil that occurred in the remote past, and that was properly remedied according to Scripture, could not be used for the present basis of disqualification.

To further sustain this position, we cite the example of St. Augustine. In his “Confessions” he writes concerning himself as follows: “For this space of nine years then (from my nineteenth year to my eight and twentieth.) we lived seduced and seducing, deceived and deceiving, in diverse lusts; openly, by sciences which they call liberal; secretly, with a false named religion; here proud, there superstitious, everywhere vain ” And again: “Upon how grievous iniquities consumed I myself, pursuing a sacrilegious curiosity, that having forsaken Thee, it might bring me to the treacherous abyss, and the beguiling service of devils, to whom I sacrificed by evil actions, and in all these things thou didst scourge me!” Yet, in spite of all this, Augustine, after his conversion, became a noted church father who occupied the high office well. We would not declare him disqualified on the basis of this miserable past. Nor does this imply justification of the things he did. Augustine, too, condemns them and humbly thanks God for forgiveness and deliverance from them.

It might, perhaps, be objected that Augustine did these things in his ignorant, unconverted state and that the matter is different with one who knowingly and willfully commits gross sin. It is readily acknowledged that the two are not synonymous but, nevertheless, also in the case of the latter, a moment of weakness cannot forever disqualify for the service of God and His church if only sincere repentance is evident and forgiveness of the sin committed obtained. It may be added that the really penitent sinner is better qualified to serve God than the self-righteous Pharisee.

But let us now return to the qualifications of elders.

An elder must be “apt to teach.” In Titus 1:9 this requisite is more specifically defined. “Holding fast the faithful word as he hath been taught, that he may be able by sound doctrine both to exhort and to convince the gainsayers.” This means that the elder must not only have the ability to instruct others but he must certainly be well-founded in the truth and particularly in the doctrine of the church he serves. He must know how to handle the doctrine in instructing the catechumens, in building up the faith of the church and in refuting heretics. ‘Only then will he also be able to fulfill the duty of the office described in the following excerpts from the Form of Ordination: “It is also the duty particularly to have regard unto the doctrine and conversation of the ministers of the Word, to the end that all things may be directed to the edification of the Church; and that no strange doctrine be taught, according to that which we read, Acts 20, where the apostle exhorteth to watch diligently against the wolves, which might come into the sheepfold of Christ; for the performance of which the elders are in duty bound diligently to search the Word of God, and continually be meditating on the mysteries of faith.”

It is certainly a bad sign when common members of the church, for no legitimate reason, absent themselves from the study of the Word of God in the societies organized for this purpose but it is a matter of more serious concern still when elders neglect these opportunities and privileges to be more firmly founded in the truth and to use their gifts for the profit of others. In the societies they have an excellent opportunity to use their abilities of teaching for the instruction of other members. Let them not neglect this solemn duty lest they disqualify themselves. As Ellicott states, “Apt to teach means not only able to teach but ready to teach and skilled in teaching.” An elder must be diligent to utilize every opportunity to build up the church in the faith and the true knowledge of God.

Likewise able teachers are not novices in the faith. A novice is one who is recently converted to the faith. Such should not be installed in the office of elder. He has need first of a period of seasoning and growth in the faith before he is able to instruct and build up others. Many churches have an ordinance that stipulates the requirement that a person must have been a member of the church (denominationally) for a certain period of time and a member of the local church for a lesser period of time before he can be considered for the office. This is proper. One may be a person of excellent ability but this never precludes the necessity of allowing sufficient time for such a person to become well-founded in the doctrines of the faith. Moreover, the text also warns that the novice, hastily ushered into the office of the elder, is very really confronted with the danger of being lifted up with pride and thus falling into the condemnation of the devil himself. Calvin aptly states. with regard to this: “There being many men of distinguished ability and learning who at that time were brought to the faith, Paul forbids that such persons shall be admitted to the office of a bishop, as soon as they have made, profession of Christianity. And he shows how great would be the danger; for it is evident that they are commonly vain, and full of ostentation, and in consequence of this, haughtiness and ambition will drive them headlong. What Paul says, we experience; for ‘novices’ have not only impetuous fervor and bold daring, but are also puffed up with foolish confidence, as if they could fly beyond the clouds. Consequently, it is not without reason that they are excluded from the honor of a bishopric, till, in process of time, their proud temper shall be subdued.”

In the passages of Scripture we have under consideration there are several things mentioned which might be classified under this general heading. The texts state that an elder must be of “good behavior, sober, not given to wine, no striker, not greedy of filthy lucre, lover of good things, etc.” It is not necessary to comment on each of these separately as their meaning is rather self-evident. In a word, an office bearer in the church must be a man of good deportment. It might not be superfluous, however, to point out that many of the qualifications listed here are inter-related. For example when one is given to too much wine, which means excessive use and even intoxication, it follows that such a person will not be sober-minded and, further, he will invariably be led to such vices as “striker, contention, covetousness and avarice.” This is unavoidable. Sin works like a chain reaction. The elder must not be one who is caught in that chain.

It is also interesting to note the meaning of the term “striker.” A striker is a passionate person who is inclined to come to blows at once over the least thing. He is one of hot temperament, the very opposite of being gentle and meek. In our day the term is used most generally to designate those who use force and violence to strike at their lawful employer who refuses to grant them whatever they may demand. It is difficult to understand how persons affiliated with worldly and unprincipled labor organizations and, therefore, co-responsible for all their evil deeds, are permitted to occupy the elder’s seat in many Reformed circles today. Scripture says that the elder must be “no striker!”

Finally, it must be understood what is meant by the statement that an elder must have “good report of them that are without.” This is difficult because it appears unlikely that those who are without should give a good testimony of the man of God. Christ, Himself, tells us that “they will speak all manner of evil against you falsely for my sake.” How then can one who is faithful to God expect a good report of them that are without? Isn’t it inevitable that the report of evil speakers will be evil?

Calvin solves this difficulty when he writes: “this appears to be very difficult, that a religious man should have, as witnesses of his integrity, infidels themselves, who are furiously mad to tell lies against me. But the apostle means, that, so far as relates to external behavior, even unbelievers themselves shall be constrained to acknowledge him to be a good man; for, although they groundlessly slander all of the children of God; yet they cannot pronounce him to be a wicked man, who leads a good and inoffensive life amongst them.”

We have emphasized all of these requirements to point out the exalted character of the office which Christ has instituted in His Church. That there are none who of themselves meet such requirements may be readily admitted. Our sufficiency is alone of God. It is alone by His grace that men are equipped and qualified to serve. By the same grace they stand and labor in their office. Indeed, then, it is a blessed and thankworthy privilege to be considered worthy to serve Him in the office of elder. All praise be to Him! 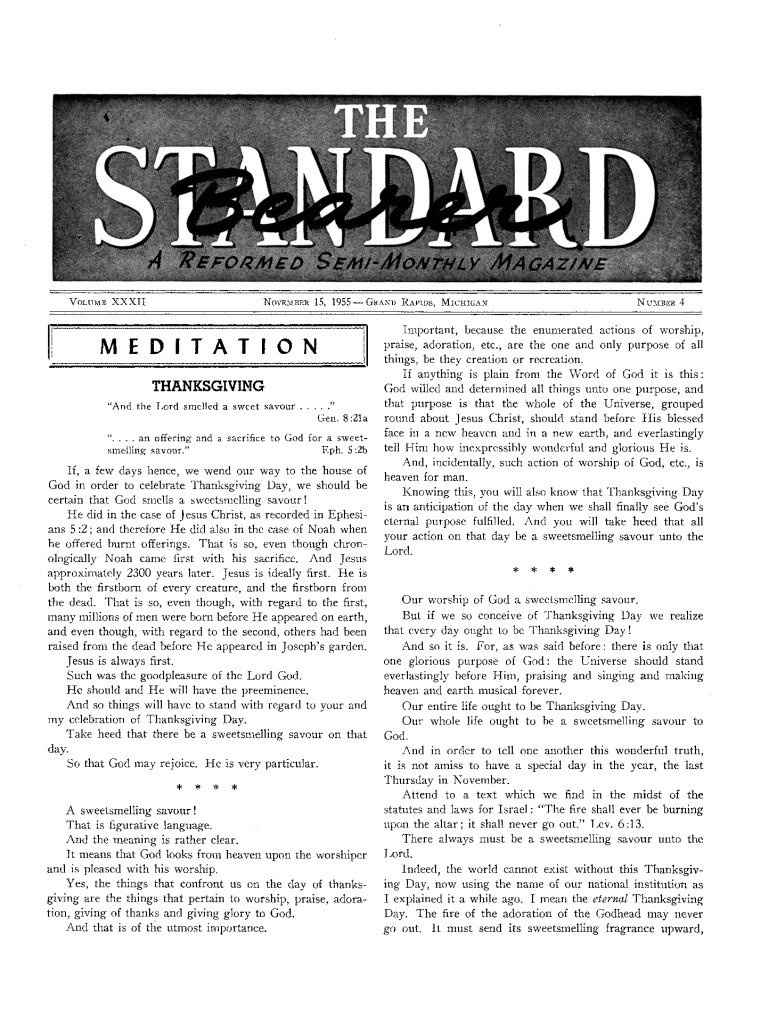