The earthen vessels of the Reformation

The earthen vessels of the Reformation

When you think about the Reformation, what comes to mind?

Perhaps your mind drifts to Germany and a humble monk, hammer in hand, pounding ninety-five theses into a church door. Or maybe you remember that same monk making a courageous cry before the Diet of Worms: “Here I stand, I can do no other, so help me God. Amen.”

Perhaps your mind drifts south to the Swiss Alps and the great Reformer of Geneva, whose powerful preaching and voluminous writing did more to advance the cause of reform than the work of any other.

Perhaps your mind drifts across the Channel to where a steely-spined Scot thundered against false doctrine and refused to bend the knee to any, whether mighty king or manipulative queen.

The names of these Reformers are well-known to us: Luther, Calvin, and Knox. We are familiar with many of their co-laborers: Beza, Bucer, Bullinger, Farel, Latimer, Olevianus, Tyndale, Ursinus, Zwingli. Often when we think of the Reformation, we think of the men who brought about the reform.

And this is not altogether out of place. Without question, these men played a leading role in the reformation of the church. Their biographies are delightful, moving, and instructive. I hope in what follows to give a taste of what these men were like so that you will study their lives in greater detail.

But there is a danger in all this. The danger is that we fall into a kind of hero-worship of these men. We so emphasize their contributions and highlight their achievements that we view the Reformation as the work of highly-gifted men. This is ironic, in a way. Ironic that in the restoration and defense of the doctrines of grace, we would praise the works of men.

What we need to remember is that these men were tools in the hands of the Reformer of the church. They were earthen vessels formed on the wheel of the Potter. What follows, then, is not a list of their achievements or outstanding gifts. You can pick up a good biography to get that information. What follows are six things that reveal how God formed these men to carry out the work of reform, and how each reveals the glory of God.

1. The Reformers were weak men.

This means, in the first place, that the Reformers were men who experienced all the weaknesses and frailties of being human.

John Knox was described as a man “low in stature, and of a weakly constitution.” When first asked to preach, “he burst forth in most abundant tears” and fled.

Calvin’s reticence is well documented. When he came to Geneva for the first time, he hoped to pass through undetected, but was discovered and compelled to stay. In addition to his shy nature, Calvin was beset by con stant sickness and pain. He battled headaches, stomach cramps, asthma, kidney stones, and hemorrhoids, to name but a few infirmities.

Even bold Luther had times of weakness. There were times when he was completely overcome with doubts about his calling and about whether or not he was doing what was right.

The significance of their being human is, in the second place, that they were sinners.

This is so obvious a point that one example will suffice. Luther was a man of strong convictions, which certainly was a virtue. But that strength was also a weakness at times. Luther was so convicted of his position on the Lord’s Supper that he vehemently condemned those who did not agree with him, including some of the Reformed brethren.

This is the great wonder of the Reformation—that God would use weak, sinful men to carry out the work of reform!

God’s purpose in doing so was to establish beyond a shadow of a doubt that the work of the Reformation was His work. “God hath chosen the weak things of the world to confound the things which are mighty… that no flesh should glory in his presence” (I Cor. 1:27, 29).

2. The Reformers were unique individuals.

When you evaluate the Reformers, there were many things that they had in common. They shared many of the same convictions, abilities, and even personality traits. But when you put them under the microscope and look more closely, you can see many differences between them.

The easiest way to see this is by comparing Luther and Calvin. The two were about as different as two individuals can be. Luther was German; Calvin was French. Luther was fiery and at times impulsive; Calvin was quiet and thoughtful. Luther spewed forth ideas like a volcano; Calvin was a clear, logical, systematic thinker. Luther has been compared to a strong, stubborn bull; Calvin has been compared to a wise, thoughtful owl.

No one man had all the gifts needed to carry out the work of reformation. Such a work could not rest on the shoulders of one man, no matter how gifted. God used many different men with many different gifts to accomplish the preservation of His church. Luther planted, Calvin watered, but God gave the increase.

3. The Reformers were first partakers.

The Reformation was a restoration of the doctrines of grace. And for the Reformers this was no mere intellectual exercise. Having grown up in the bosom of the Roman Catholic Church, they knew from experience the dread terror of being locked into a system of works-righteousness. They knew from their own experiences the freedom of God’s grace. Being themselves partakers of God’s grace, the Reformers knew whereof they preached.

Luther is an outstanding example. Luther knew from his own experience his need of God’s grace. For years as a Roman Catholic monk he lived in perpetual doubt about his salvation. He tried more than any other to earn his salvation, but he never found any peace. Only when he was led to understand the truth of justification by faith alone and to taste for himself of God’s grace did he experience the comfort and assurance he so desperately craved. For the rest of his life Luther labored out of the knowledge of God’s grace to him.

For us children of the Reformation, this must characterize our lives as well. This must be true of ministers. They must be first partakers of the fruit of their preaching. To preach grace, they themselves must taste that grace. And something similar is true for all believers. Our hearty defense of the Reformation and the doctrines of grace may be no intellectual exercise for us, but must arise out of the recognition of our own complete dependence upon God’s grace.

4. The Reformers were powerful preachers.

The Reformers wore many hats. They were compassionate pastors who cared for the needs of their flocks. They were wise churchmen who gave direction to the churches. They were scholarly professors who lectured widely and trained others for the ministry. They were prolific writers who penned entire libraries of books. And the list goes on.

But at heart, the Reformers were preachers. Luther was a preacher. Calvin was a preacher. From Sunday to Sunday (and often many days during the week) they would mount the pulpit and expound to their congregations the Word of God. Their sermons were exegetically deep, doctrinally sound, homiletically clear, and pastorally wise.

This was the irrepressible power behind the whole Reformation—preaching. There were other, lesser means that God used as well, but without the preaching there would have been no Reformation.

This too magnifies God. He not only uses weak, sinful men, but He is also pleased to have those men to preach Christ crucified, which to the world is foolishness (I Cor. 1:21, 23). Preaching is the power of God and the wisdom of God (v. 14).

This is the greatest power in all the world, greater than the destructive force of a Texas hurricane or of many North Korean bombs. This is the power of God to salvation. Nothing else in all the world has that kind of power. This is why we children of the Reformation love the preaching and maintain its primacy.

They were not motivated by love of self or a desire for the praise of their own name. They did not compete with their colleagues to win for themselves a higher standing in the church.

Take Calvin, for example. When as a young man he stopped in Geneva for a night, he was cornered by the fiery Reformer, William Farel, who pressed him to stay to reform their church there. Calvin refused. He wanted to hide away in some forsaken corner with his books. But he ultimately relented. Certainly not for his own glory. Not even because Farel was such a convincing salesman. He did so because he loved Christ and loved Christ’s church.

And later, when Calvin’s enemies sought to smear him, they labeled him “that God-intoxicated man.” But what they intended as criticism is his highest commendation. He lived for the glory of his God.

Would to God that all officebearers and church members today be known by their enemies as God-intoxicated men and women!

6. The Reformers were humble dependents.

In the work of reformation, the Reformers were consciously dependent upon God. They knew that the only explanation for what was taking place through them was the wonderwork of God. They heartily believed that the reformation of the church was a work that only God could perform. Yes, He used them as instruments in His hands. But the work was His, from beginning to end.

Listen to the inimitable Luther: “Take myself as an example. I opposed indulgences and all the papists, but never with force. I simply taught, preached, and wrote God’s Word; otherwise I did nothing. And while I slept, or drank Wittenberg beer with my friends Philip and Amsdorf, the Word so greatly weakened the papacy that no prince or emperor ever inflicted such losses upon it.” And then he added these words, “I did nothing; the Word did everything.”

After 500 years, we give thanks to God for Luther and the others, and for the work God performed through them. But after 500 years, we remember that, in the end, Luther did nothing. God did everything. Which leads us to but one conclusion: 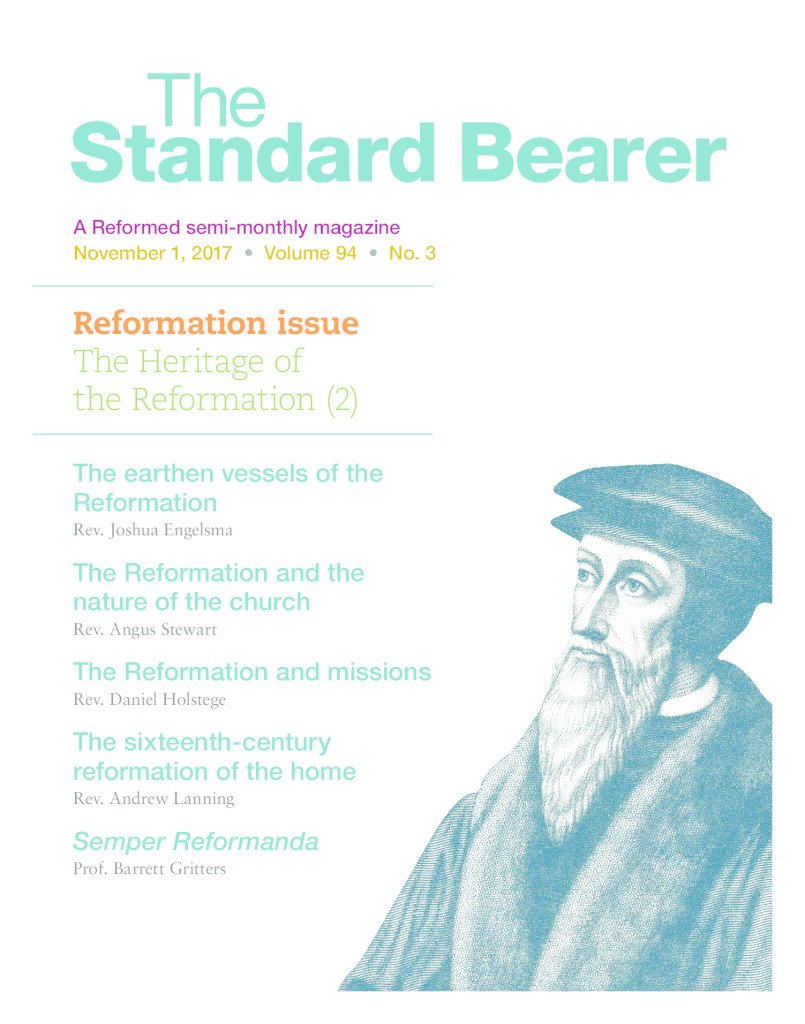