In our preceding article we called attention to the breadth and scope of the doctrine of Common Grace as set forth by John Calvin in his Institutes of the Christian Religion. In this article we will call attention to the fact that Calvin’s doctrine of a common grace, although broad in its content, is nevertheless also very limited. We realize that we are now calling attention to the writings of Calvin and that the question is more important as to what appears in our reformed confessions. Nevertheless, it must certainly be of interest to call attention to what the Genevan Reformer has to say on this subject.

And then we would immediately declare that there is a tremendous difference between Calvin’s doctrine of Common Grace and this doctrine as set forth in our present day.

It can hardly be denied that Calvin, by God’s grace is the man who maintained the Special Grace of God which is bestowed exclusively upon the Church of God. In support of this we quote the following. First, we read of Calvin that there is no love of God except in Christ Jesus. We read in III, 2, 32: “Therefore, when the Lord by His promises invites a man not only to receive, but also to meditate on the effects of His goodness, He at the same time gives him a declaration of his love. Whence we must return to this principle, that every promise is an attestation of the Divine love to us. But it is beyond all controversy, that no man is loved by God but in Christ; he is the ‘beloved Son,’ in whom the love of the Father perpetually rests, and then from him diffuses itself to us; as Paul says, that we are ‘accepted in the beloved.'” Perhaps one may object that Calvin here is speaking of the saving love of God in Christ. Even so, let it then be understood that, according to the Reformer, this love of God is exclusively particular. Secondly, the grace of God which delivers us from the curse and wrath of God is wholly particular, as we read in III, 22, 7: “Judas, therefore, in his unfaithful exercise of the apostleship, might be worse than a devil; but of those whom Christ has once united to his body, he will never suffer one to perish; for in securing their salvation, he will perform what he has promised, by exerting the power of God, who is greater than all.” And we read emphatically in III, 22, 1 (Calvin, in this chapter, is speaking of God’s gratuitous election, over against those who would maintain that the Lord, foreseeing what would be the respective merits of every individual, makes a corresponding distinction between different persons, adopting as His children such as He foreknows will be deserving of his grace, and condemning and rejecting those whose dispositions He sees will be inclined to wickedness and impiety):

For the truth of God on this point is too certain to be shaken, too clear to be overthrown by the authority of men (Calvin here is speaking of the truth of God’s sovereign election, H.V.). Others, neither acquainted with the Scripture, nor deserving of any attention, oppose the sound doctrine with extreme presumption and intolerable effrontery. God’s sovereign election and grace, and preterition of others they make the subject of formal accusation against Him. But if this is the known fact, what will they gain by quarreling with God? We teach nothing but what experience has proved, that God has always been at liberty to bestow His grace on whom He chooses. I will not inquire how the posterity of Abraham excelled other nations, unless it was by that favor, the cause of which can only be found in God. Let them answer why they are men, and not oxen or asses: when it was in God’s power to create them dogs, He formed them after His own image. Will they allow the brute animals to expostulate with God respecting their condition, as though the distinction were unjust?

And then Calvin proceeds to quote from the Scripture in support of the truth of God’s absolute sovereignty. Of interest is also what we read in III, 22, 8, where Calvin quotes Augustine:

But, it will be said, Ambrose, Origen, and Jerome believed that God dispenses His grace among men, according to His foreknowledge of the good use which every individual will make of it. Augustine also was once of the same sentiment; but when he has made a greater proficiency in scriptural knowledge, he not only retracted, but powerfully confuted it. And after his retraction, rebuking the Pelagians for persisting in their error, he says, “Who but must wonder that this most ingenious sense should escape the apostle? For after proposing what was calculated to excite astonishment respecting those children yet unborn, he stated to himself, by way of objection, the following question: What, then, is there unrighteousness with God? It was the place for him to answer, that God foresaw the merits of each of them; yet he says nothing of this, but resorts to the decrees and mercy of God.”

And then Augustine continues in this reference to Augustine by Calvin, in the same vein. Indeed, that God is sovereign is certainly taught throughout the writings of Calvin. This can never be denied.

We would now call attention, briefly, to the present doctrine of Common Grace, as set forth in the Three Points, and which doctrine is emphatically rejected by Calvin. It might be well, in this connection, to quote these Three Points:

POINT I: “Relative to the first point which concerns the favorable attitude of God towards humanity in general and not only towards the elect, synod declares it to be established according to Scripture and the Confession that, apart from the saving grace of God shown only to those that are elect unto eternal life, there is also a certain favor or grace of God which He shows to His creatures in general. This is evident from the Scriptural passages quoted and from the Canons of Dordrecht, II, 5 and III, IV, 8 and 9, which deal with the general offer of the Gospel, while it also appears from the citations made from Reformed writers of the most flourishing period of Reformed Theology that our Reformed writers from the past favored this view.”

POINT II: “Relative to the second point, which is concerned with the restraint of sin in the life of the individual man and in the community, the Synod declares that there is such a restraint of sin according to Scripture and the Confession. This is evident from the citations from Scripture, and from the Netherland Confession, Arts. 13 and 36, which teach that God by the general operations of His Spirit, without renewing the heart of man, restrains the unimpeded breaking out of sin, by which human life in society remains possible; while it is also evident from the quotations from Reformed writers of the most flourishing period of Reformed theology, that from ancient times our Reformed Fathers were of the same opinion.”

POINT III: “Relative to the third point, which is concerned with the question of civil righteousness as performed by the unregenerate, synod declares that according to Scripture and the Confessions the unregenerate, though incapable of doing any saving good, can do civil good. This is evident from the quotations from Scripture and from the Canons of Dordrecht, III, IV, 4, and from the Netherland Confession, Art. 36, which teach that God without renewing the heart so influences man that he is able to perform civil good; while it also appears from the citations from Reformed writers of the most flourishing period of Reformed Theology, that our Reformed Fathers from ancient times were of the same opinion.”

Common Grace, as expressed in the First Point, teaches that God, in the preaching of the gospel, shows a certain favor or grace to all who come under the preaching of the gospel. Over against this stands the clear teaching of Calvin, that the gospel is a savor of death unto death, and that the reason why the unbeliever does not believe lies in this, that the arm of the Lord is not extended to him, Concerning this, Calvin writes in Calvin’s Calvinism, page 96:

But the apostle carries the matter much deeper and higher than this, both as to man and as to God, showing that there is that “foolishness” and “ignorance” in man that he cannot understand the things of the Spirit, and that the wisdom and counsel of God decreed the whole. For (saith the apostle), “Who hath known the mind of the Lord, and who hath been His counselor?” No one (argues he) can know the secrets of God, but by His Spirit only. Whence he fully concludes, that those alone are the scholars of God who are gifted, not with the spirit of this world, but with His own heavenly Spirit, that they may know the things that are freely given them of God.

And on pages 97-98 of the same book Calvin writes that the gospel is a savor of death unto death because the arm of the Lord is not revealed to them:

From this state of things flows the conclusion (and this we hold fast) that the Gospel, which is, in its essential nature, “a savor of life unto life, and ought to be so to all that hear it, becomes “a savor of death unto death in them that perish,” who thus remain in their darkness and unbelief because “the arm of the Lord” is not revealed to them. If, then, amidst so universal a corruption and depravity of our nature some few do believe the Gospel, to ascribe the faith of such to their own goodness would be perfectly impious. No! Let thanks, on the contrary, be given to God continually (according to the admonition of the apostle), “because He hath from the beginning chosen such believers unto salvation, through sanctification of the Spirit and belief of the truth,” in which words the apostle traces faith and sanctification to the eternal election of God as its source and cause. What shall we say then? Were these chosen because they had sanctified themselves and rendered themselves meet or worthy to be chosen? The apostle asserts most expressly that this sanctification was the work of the Spirit of God. And as the nature of faith is the same, and equally the gift of God and the work of His Spirit, it incontrovertibly follows that those who are illuminated unto faith are thus illuminated and gifted with faith, that their election of God may be manifested and ratified by these its very effects.

This is Reformed language. It is Scriptural, and Calvinistic. Notice that Calvin writes at the beginning of this quotation, “and this we hold fast.” To this presentation of the truth, therefore, the Genevan Reformed held fast. And we should also notice how logical Calvin is in his reasoning, speaking of that which “follows incontrovertibly.” If, in the present day, our churches are often accused of being logical in our reasoning, Calvin does not hesitate to speak of that which “follows incontrovertibly.” The Lord willing, we will continue with this in our following article. 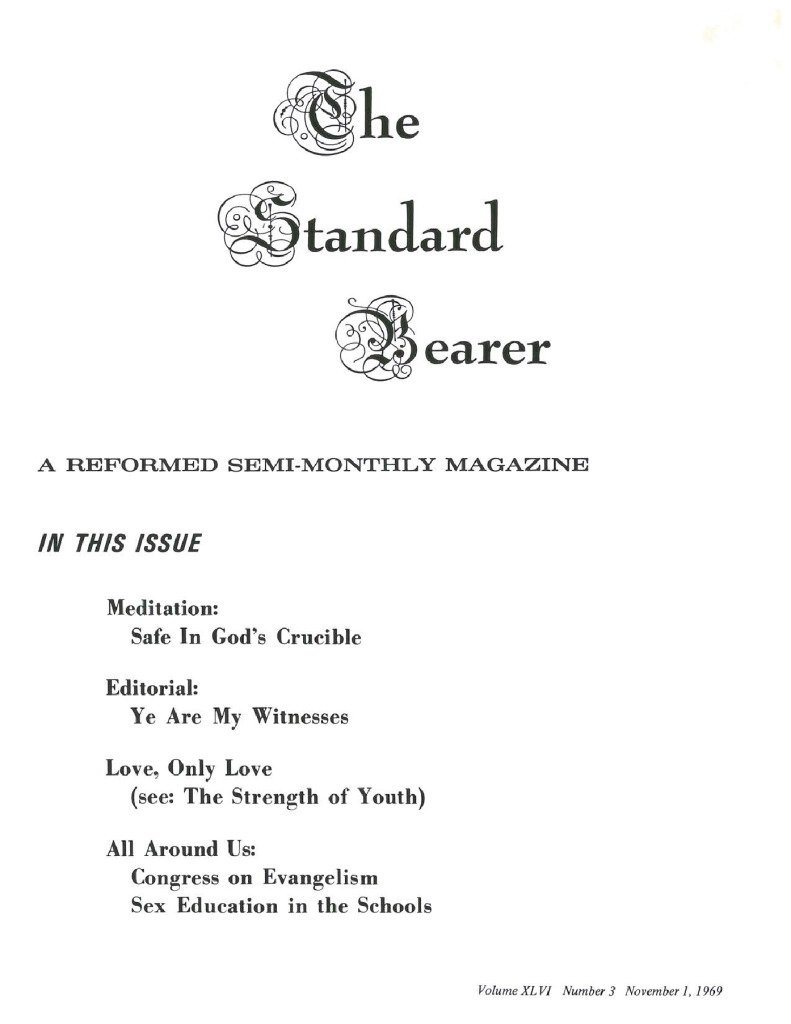