The Doctrine of Sin, The Third Period 730-1517 A.D., Doctrine of the Church of Rome, Council of Trent

The Doctrine of Sin, The Third Period 730-1517 A.D., Doctrine of the Church of Rome, Council of Trent

The Roman Catholic Council of Trent, which met for several years and began its sessions some thirty years after the beginning of the Reformation in 1517, was convened to combat and counteract the rising tide of the Reformation. This council set itself to maintain the doctrinal position and teachings of the Romish Church. It also expressed itself on the subject of sin. Concerning the task and difficulties of this council, Hodge writes as follows, Vol. II, 174 ff.:

The Council of Trent had a very difficult task to perform. In the first place, it was necessary to condemn the doctrines of the Reformers. But the Protestants, as well Lutheran as Reformed, had proclaimed their adherence to the Augustinian system in its purity and fulness; and that system had received the sanction of councils and popes and could not be directly impugned. This difficulty was surmounted by grossly misrepresenting the Protestant doctrine, and making it appear inconsistent with the doctrine of Augustine. This method has been persevered in to the present day. Moehler in his “Symbolism” represents the doctrine of the Protestants, and especially that of Luther, on original sin, as a form of Manichiesm. The other, and more serious difficulty, was the great diversity of opinion existing in the Church and in the Council itself. Some were Augustinians; some held that original sin consisted simply in the want of original righteousness, but that that want is sin. Others admitted no original sin, but the imputation of Adam’s first transgression. Others, with the Dominicans, insisted that the disorder of all the powers consequent on the loss of original righteousness; i.e., concupiscence, is truly and properly sin. This the Franciscans denied. Under these circumstances the pontifical legates, who attended the Council, exhorted the assembled fathers, that they should decide nothing as to the nature of original sin, reminding them that they were not called together to teach doctrines, but to condemn errors. This advice the Council endeavored to follow, and hence its decisions are expressed in very general terms.

The Council of Trent, in its fifth session, held June 17, 1546, set forth its decrees concerning original sin. After declaring that, in order that their Catholic faith may continue in its own perfect and spotless integrity, and that the Christian people may not be carried about with every wind of doctrine, seeing that that old serpent, the perpetual enemy of mankind, amongst the very many evils with which the Church of God is in these our times troubled, has also stirred up not only new, but even old dissensions touching original sin, this council would now ordain and confess what is the truth concerning all these matters, the Council now sets forth the “truth” on this matter in 5 chapters.

In chapter 1 the Council declares the following:

If any one does not confess that the first man, Adam, when he had transgressed the commandment of God in Paradise, immediately lost the holiness and justice wherein he had been constituted; and that he incurred, through the offense of that prevarication, the wrath and indignation of God, and consequently death, with which God had previously threatened him, and, together with death, captivity under his power who thenceforth had the empire of death, that is to say, the devil, and that the entire Adam, through that offense of prevarication, was changed, in body and soul, for the worse; let him be anathema.

Here the Synod anathematizes all those who do not confess that Adam, when he transgressed in paradise the commandment of God, did immediately lose the holiness and righteousness in which he had been constituted; and that by that offence he incurred the wrath and indignation of God, and thus also death and subjection to him who has the power of death, that is, the devil; and that the whole Adam by the offence of his transgression was as to the’ body and the soul, changed for the worse. Hence, the effects of Adam’s first sin upon himself therefore was (1) The loss of original righteousness. (2) Death and captivity to Satan. (3) The deterioration of his whole nature both soul and body.

In chapter 2 the Council declares the following:

If any one asserts, that the prevarication of Adam injured himself alone, and not his posterity; and that the holiness and justice, received of God, which he lost, he lost for himself alone, and not for us also; or that he, being defiled by the sin of disobedience, has only transfused death and pains of tie body into the whole human race, but not sin also, which is the death of the soul; let him be anathema:—whereas he contradicts the apostle who says: By one man sin entered into the world, and by sin death, and so death passed upon all men, in whom all have sinned.

In this chapter the Synod anathematizes all those who say that the sin of Adam injured only Adam, and not his posterity. Here it is taught that the effects of Adam’s sin upon his posterity are: (1) The loss of original righteousness. (2) Death and the miseries of this life; and (3) Sin, or spiritual death. Now this is a distinct condemnation of Pelagianism, and the clear assertion of original sin, as something transmitted to all men. The nature of that sin, however, is not further stated than that it is the death of the soul, which may be differently explained.

In chapter 3 the Council declares:

If any one asserts, that this sin of Adam,—which in its origin is one, and being transfused into all by propagation, not by imitation, is in each one as his own,—is taken away either by the powers of human nature, or by any other remedy than the merit of the one mediator, our Lord Jesus Christ, who hath reconciled us to God in His own blood, being made unto us justice, sanctification, and redemption; or if he denies that the said merit of Jesus Christ is applied, both to adults and to infants, by the sacrament of baptism rightly administered in the form of the Church; let him be anathema: For there is no other name under heaven given to men, whereby we must be saved. Whence that voice: Behold the Lamb of God, behold him who taketh away the sins of the world; and that other: As many as have been baptized, have put on Christ.

In this chapter the Synod anathematizes all those who say that this sin of Adam, which is conveyed to all, can be removed by the powers of human nature. In this chapter it is asserted: (1) That original sin is conveyed by propagation and not, as the Pelagians say, by imitation. (2) That it belongs to every man and inheres in him. (3) That it cannot be removed by any other means than the blood of Christ.

In chapter 4 we have the following:

If any one denies, that infants, newly born from their mothers’ wombs, even though they be sprung from baptized parents, are to be baptized; or says that they are baptized indeed for the remission of sins, but that they derive nothing of original sin from Adam, which has need of being expiated by the laver of regeneration for obtaining life everlasting,—whence it follows as a consequence, that in them the form of baptism, for the remission of sins, is understood to be not true, but false,—let him be anathema. For that which the apostle has said, By one man sin entered into the world, and by sin death, and so death passed upon all men, in whom all have sinned, is not to be understood otherwise than as the Catholic Church spread everywhere hath always understood it. For, by reason of this rule of faith, from a tradition of the apostles, even infants, who could not as yet commit any sin of themselves, are for this cause truly baptized for the remission of sins, that in them that may be cleansed away by regeneration, which they have contracted by generation. For, unless a man be born again of water and of the Holy Ghost, he can not enter into the kingdom of God.

Concerning this chapter Hodge has the following comments:

The Synod condemns all who teach that new-born children should not be baptized; or, that although baptized for the remission of sins, they derive nothing of original sin from Adam, which needs to be expiated in the laver of regeneration in order to attain eternal life, so that baptism, in their case, would not be true but false. Children, therefore, who cannot have committed sin, in their own persons, are truly baptized for the remission of sins, that what they had contracted in generation, may be purged away in regeneration. From this it appears that according to the Council of Trent there is sin in new-born infants which needs to be remitted and washed away by regeneration.

The fifth canon or chapter reads as follows:

If any one denies, that, by the grace of our Lord Jesus Christ, which is conferred in baptism, the guilt of original sin is remitted; or even asserts that the whole of that which has the true and proper nature of sin is not taken away; but says that it is only rased, or not imputed; let him be anathema. For, in those who are born again, there is nothing that God hates; because, There is no condemnation to those who are truly buried together with Christ by baptism into death; who walk not according to the flesh, but, putting off the old man, and putting on the new who is created according to God, are made innocent, immaculate, pure, harmless, and beloved of God, heirs indeed of God, but joint heirs with Christ; so that there is nothing whatever to retard their entrance into heaven. But this holy synod confesses and is sensible, that in the baptized there remains concupiscence, or an incentive (to sin); which, whereas it is left for our exercise, can not injure those who consent not, but resist manfully by the grace of Jesus Christ; yea, he who shall have striven lawfully shall be crowned. This concupiscence, which the apostle sometimes calls sin, the holy Synod declares that the Catholic Church has never understood it to be called sin, as being truly and properly sin in those born again, but because it is of sin, and inclines to sin. And if any one is of a contrary sentiment, let him be anathema. This same holy Synod doth nevertheless declare, that it is not its intention to include in this decree, where original sin is treated of, the blessed and immaculate Virgin Mary, the mother of God; but that the constitutions of Pope Sixtus IV, of happy memory, are to be observed, under the pains contained in the said constitutions, which it renews.

We will conclude our present article at this point. So, although the apostle Paul does sometimes call it sin, the Romish Church has never understood it to be called sin, as being truly and properly sin in those who are born again. And, of course, the Romish Church excludes the virgin Mary from this decree which treats of original sin. This, of course, is a very arbitrary decision. To this canon or chapter we will return in our following article. 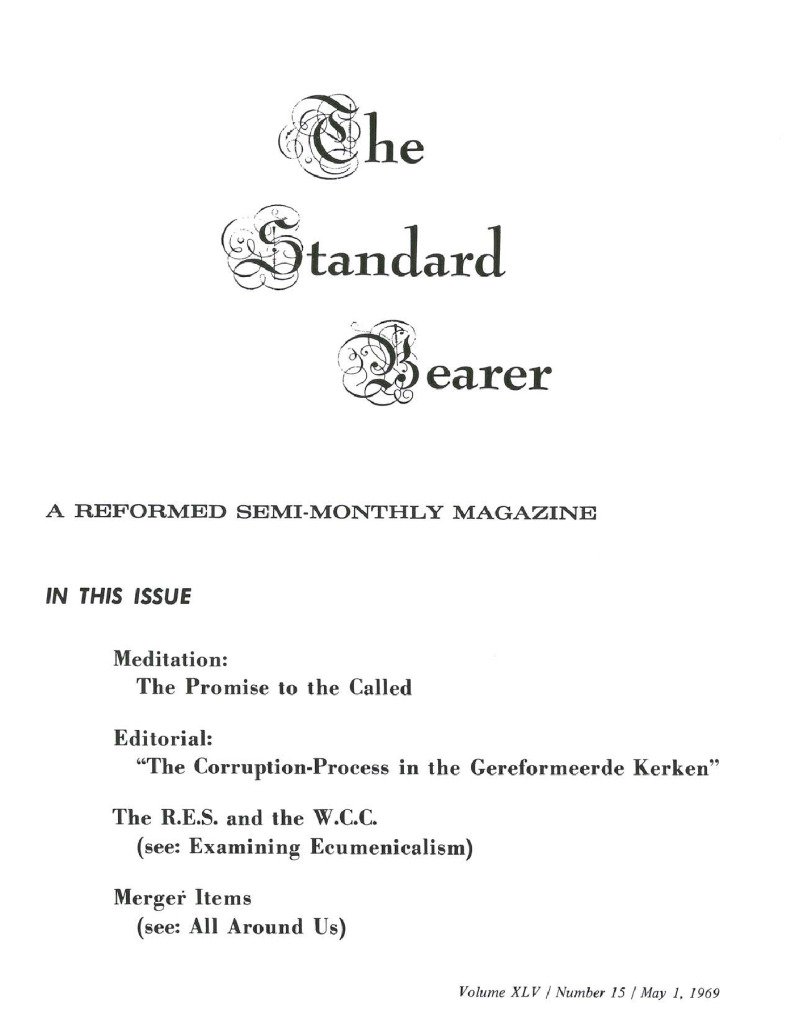