As to Augustine’s view with respect to these three views of the origin of the human soul, Schaff writes as follows (History of the Christian Church, Vol. III, 831-832):

“Augustine emphatically rejects the doctrine of pre-existence, without considering that his own theory of a generic pre-existence and apostasy of all men in Adam is really liable to similar objections (we have already called attention to Augustine’s faulty interpretation of the last part of

in our preceding article—H.V.). For he also hangs the whole fate of the human race on a transcendental act of freedom, lying beyond our temporal consciousness; though, it is true, he places this act in the beginning of earthly history, and ascribes it to the one general ancestor, while Origen transfers it into a previous world, and views it as an act of each individual soul.

But between creationism and traducianism Augustine wavers, because the Scriptures do not expressly decide. He wishes to keep both the continuous creative activity of God and the organic union of body and soul.

Augustine regards this whole question as belonging to science and the schools, not to faith and the church, and makes a confession of ignorance which, in a man of his speculative genius, involves great self-denial. “Where the Scripture,” he says, “renders no certain testimony, human inquiry must beware of deciding one way or the other. If it were necessary to salvation to know anything concerning it, Scripture would have said more.”

The undersigned wonders to what extent Augustine believed in the theory of pre-existentianism. It is true that he reads the last part of Romans 5:12 as reading: “in whom all have sinned,” due to his slight knowledge of the original Greek. Augustine, therefore, relied upon the Vulgate, the Latin translation of the Bible. It is also true that this interpretation of that last part of Romans 5:12cannot possibly be maintained, and that it must read: “because all have sinned.” However, it is certainly true that Augustine hangs the entire “fate” of the human race upon that one sin of Adam, whereas Origen transfers it into a previous world, and views it as an act of each individual soul. Besides, Augustine, in his doctrine of the fall of man, starts with the idea of the organic unity of the human race, and with the profound parallel of Paul between the first and the second Adam. He does not view the first man as merely an individual, but as the progenitor and representative of the whole human race, standing to natural mankind in the same relation as that of Christ to redeemed and regenerate mankind. According to Augustine, the history of the fall has universal significance; in Adam human nature fell, and therefore all are conceived and born in sin who have inherited that nature from him. Is it possible that Augustine exposed himself to the theory of preexistentianism because he stumbled over Romans 5:12, and this because of a faulty Latin translation of that text in the Vulgate? Fact is, this church father based his conception of original sin not only upon Romans 5:12, but also upon such passages such as Gen. 8:21, Ps. 51:7, John 3:6, I Cor. 7:14 andEph. 2:3.

Schaff sums up the Augustinian doctrine of sin as follows, Vol. III, 841-843:

To sum up the Augustinian doctrine of sin: This fearful power is universal; it rules the species, as well as individuals; it has its seat in the moral character of the will, reaches thence to the particular actions, and from them reacts again upon the will; and it subjects every man, without exception, to the punitive justice of God. Yet the corruption is not so great as to alter the substance of man, and make him incapable of redemption. The denial of man’s capacity for redemption is the Manichaean error, and the opposite extreme to the Pelagian denial of the need of redemption. “That is still good,” says Augustine, “which bewails lost good; for had not something good remained in our nature, there would be no grief over lost good for punishment.” Even in the hearts of the heathen the law of God is not wholly obliterated, and even in the life of the most abandoned men there are some good works. But these avail nothing to salvation. They are not truly good, because they proceed from the turbid source of selfishness.

Let us pause here a moment. According to Schaff, Augustine taught that even in the life of the most abandoned men there are some good works. Now we would never maintain that there are some good works in the wicked as apart from the regenerating grace of God. However, this is a far cry from the teaching of the Three Points of 1924, that the unregenerate are able to do what is good in the sight of the Lord. For Augustine also taught that these works avail nothing to salvation, and that they are not truly good inasmuch as they proceed from the turbid source of selfishness. One may certainly conclude from this quotation of Schaff that all that Augustine taught was that the wicked do some good only in the natural sense of the word, but that this “good” is surely not good in the sight of the Lord.

We now continue with this quotation form Schaff:

Faith is the root, and love the motive, of all truly good actions, and this love is shed abroad in our hearts by the Holy Ghost. “Whatsoever is not of faith, is sin;”—this certainly verifies what we stated in the preceding paragraph—H.V. Before the time of Christ, therefore, all virtues were either, like the virtues of the Old Testament saints, who hoped in the same Christ in whom we believe, consciously or unconsciously, Christian; or else seeming virtues, destitute of the pure motive and the right aim. Lust of renown and lust of dominion were the fundamental traits of the old Romans, which fast gave birth to those virtues of self-devotion to freedom and country, so glorious in the eyes of men; but which afterwards, when with the destruction of Carthage all manner of moral corruption poured in, begot the Roman vices.

This view of heathen or natural morality as a specious form of vice, though true to a large extent, is nevertheless an unjust extreme, which Augustine himself cannot consistently sustain. Even he was forced to admit important moral differences among the heathen: between, for example, a Fabricius, of incorruptible integrity, and the traitor Catiline; and though he merely defines this difference negatively, as a greater and less degree of sin and guilt, yet this itself involves the positive concession, that Fabricius stands nearer the position of Christian morality, and that there exists at least relative goodness among the heathen. Moreover, he cannot deny, that there were before Christ, not only among the Israelites, but also among the Gentiles, God-fearing souls, such as Melchisedec and Job, true Israelites, not according to the flesh, but according to the spirit, whom God by the secret workings of His Spirit drew to Himself even without baptism and the external means of grace. So the Alexandrian fathers saw scattered rays of the Logos in the dark night of heathenism; only they were far from discriminating so sharply between what was Christian and what was not Christian.

All human boasting is therefore excluded, man is sick, sick unto death out of Christ, but he is capable of health; and the worse the sickness, the greater is the physician, the more powerful is the remedy—redeeming grace.

From the above quotation of Schaff we may safely conclude the emphasis which Augustine placed upon the corruption of the natural man. It appears from this quotation that Schaff would defend the proposition that the natural man is not wholly corrupt. He declares that there exists at least some relative goodness among the heathen, that Fabricius stands nearer the position of Christian morality than other heathens. It is not our purpose at this time to refute this in the light of Scripture and our Confessions. But the fact that Schaff criticizes Augustine on this point surely points conclusively toward the fact that Augustine maintained the utter depravity of the sinner as apart from Christ. In fact, he declares that the view of heathen or natural morality as a specious form of vice, though true to a large extent, as set forth by Augustine, is an unjust extreme which Augustine himself would not be able to sustain consistently.

How different is Augustine’s conception of grace from that of Pelagius! Augustine experienced personally this power of the living God. The grace of God had been experienced by him as a living, saving power of the alone blessed God. Augustine, writes Schaff, reaches his peculiar doctrine of redeeming grace in two ways. First he reasons upwards from below, by the law of contrast; that is, from his view of the utter incompetency of the unregenerated man to do good (notice, the utter incompetency of the unregenerated man to do good—H.V.). The greater the corruption, the mightier must be the remedial principle. The doctrine of grace is thus only the positive counterpart of the doctrine of sin. And, in the second place, he reasons downward from above; that is, from his conception of the all-working, all-penetrating presence of God in natural life, and much more in the spiritual. While Pelagius deistically (Deism is the heresy that separates God from the world, whereas Pantheism is the heresy that identifies God with the world) severs God and the world after the creation, and places man on an independent footing, Augustine, even before this Pelagian controversy, was, through his speculative genius and the earnest experience of his life, deeply penetrated with a sense of the absolute dependence of the creature on the Creator, in whom we live, and move, and have our being. One may say that what we call Augustinianism was not a reaction against Pelagianism, but that Pelagianism was a reaction against the views of Augustine. It is true that Augustine’s views on sin and grace, freedom and predestination, were not what they afterward came to be. But what is commonly known today as the Augustinian views on sin and grace had certainly ripened in the soul of this church father before the Pelagian controversy. Neither did Augustine cater to the pantheistic conception of identifying God with the world. His impression of the immanence of God in the world has nothing pantheistic; it does not tempt him to deny the transcendence of God and his absolute independence of the world. Guided by the Holy Scriptures, he maintains the true mean between deism and pantheism. The Lord willing, we will continue with this in our following article. 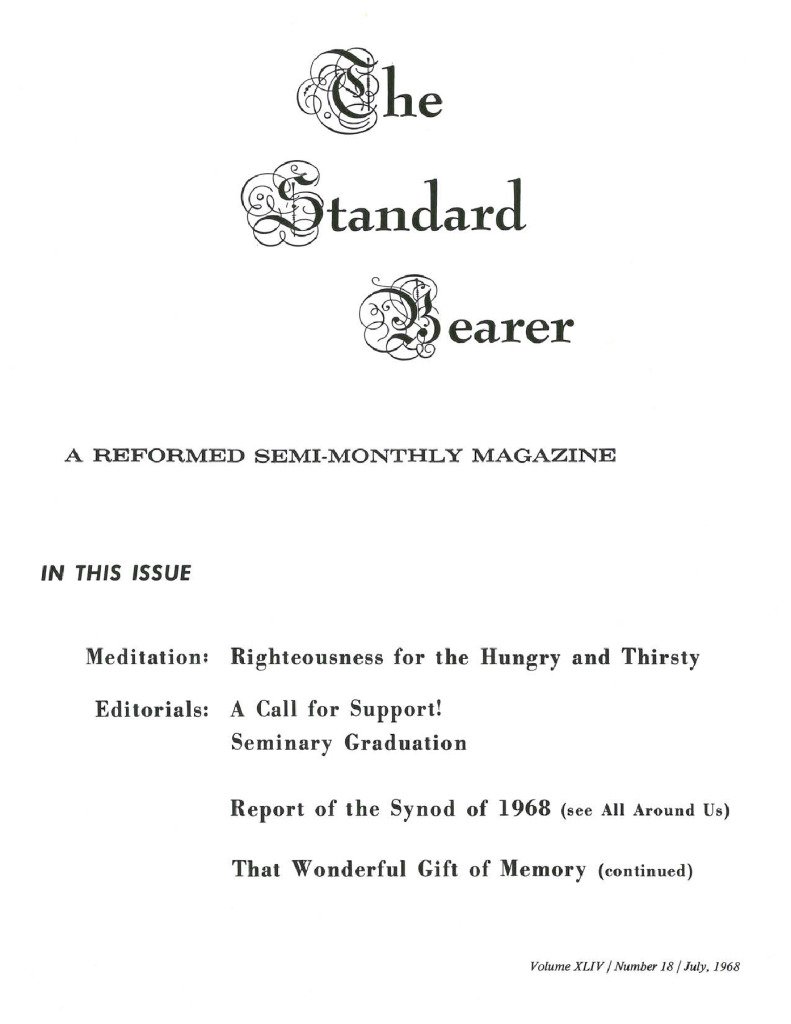