In our preceding article we noted that, according to Philip Schaff in his History of the Christian Church, Vol. II, 583 ff., the apostolic scriptures everywhere bear witness of the salvation wrought through Christ, but that it required time for the profound ideas of a Paul and a John to come up clearly to the view of the church. It is true that the church lived from the first on the atoning sacrifice of Christ, that the cross ruled all Christian thought and conduct and fed the spirit of martyrdom, but the primitive church teachers lived more in the thankful enjoyment of redemption than in logical reflection upon it. Careful definition and sound analysis concerning the cross of Christ and its meaning were lacking in the early days of the New Dispensation. And this is understandable. That the church gave a clear and concise definition of the truth was always occasioned by winds of heresy. And the cross of our Lord Jesus Christ was not a fundamental issue during those early days.

Philip Schaff remarks, and this is also substantiated by Dr. H. Bavinck, that the negative part of the doctrine of the atonement, the subjection of the devil, the prince of the kingdom of sin and death, was naturally most dwelt on in the patristic period, on account of the existing conflict of Christianity with heathenism, which was regarded as wholly ruled by Satan and demons. According to Hagenbach, in his History of Doctrines, the doctrine of the devil occupied during this period (this second period, 254-730) a prominent place in Soteriology, inasmuch as GREGORY OF NYSSA and other theologians still maintained the notion previously held, that God defrauded the devil by a dishonest exchange. Of this conception of Georgory of Nyssa, Hagenbach writes as follows (Vol. I, 346):

Gregory of Nyssa. The train of his argument is as follows: Men have become slaves of the devil by sin. Jesus offered himself to the devil as the ransom which should release all others. The crafty devil assented, because he cared more for the one Jesus, so much superior to them, than for all the rest. But, notwithstanding his craft, he was deceived, since he could not retain Jesus in his power. It was, as it were, a deception on the part of God, that Jesus veiled his Divine nature, which the devil would have feared, by means of his humanity, and thus deceived the devil by the appearance of flesh. But Gregory allows such a deception according to the jus talionis (just retaliation—H.V.); the devil had first deceived men, for the purpose of seducing them; but the design of God in deceiving the devil was a good one, viz., to redeem mankind. (Gregory’s arguments look very much like the well-known maxim, “that the end sanctifies the means.”) This dramatic representation of the subject includes, however, that other more profound idea, carried out with much ingenuity in many of the wondrous legends of the middle ages, that the devil, notwithstanding his subtlety, is at last outwitted by the wisdom of God, and appears in the comparison as a stupid devil.

Of course, this view of Gregory of Nyssa hardly needs any refutation. We understand, of course, that the Lord would not resort to deception to outwit the devil. To save and redeem His own, God did not have to resort to trickery and deception in order to outwit the devil, but the living God must redeem and save His own in a way which would be in complete harmony with His adorable and unchangeable justice and righteousness.

Hagenbach continues and writes that this idea of Gregory of Nyssa and others was opposed by GREGORY OF NAZIANZUM, although it prevailed for some time under different modifications. Of this opposition by Gregory of Nazianzum, this writer has the following (Gregory has the following):

We were under the dominion of the wicked one, inasmuch as we were sold unto sin and exchanged pleasure for vileness. If it now be true that a ransom is always paid who is in the possession of the thing for which it is due, I would ask, to whom was it paid in this case? and for what reason? Perhaps to Satan himself? But it would be a burning shame to think so. For in that case the robber had not only received from God, but- God himself (in Christ) as a ransom and an exceedingly great recompense of his tyranny . . . . Or is it paid to the Father Himself? But in the first place it might be asked, how could that be, since God did not hold us in bondage? (I assume the meaning is that, whereas the devil reigns over us, spiritually, and we are therefore slaves of the devil, God, in that sense, did not hold us in bondage. We understand, of course, that our bondage in sin is also in a very real sense of the word a bondage of the Lord, in complete harmony with His justice and righteousness—H.V.) And again, how can we satisfactorily explain it, that the Father delighted in the blood of the only begotten Son? since He did not even accept the offer of Isaac, but substituted the sacrifice of a ram in the place of a rational being? It is not then evident that the Father received the ransom, not because He demanded or needed it, but on account of the Divine economy, and because man is to be sanctified by the incarnation of God; that having subdued the tyrant, He might deliver and reconcile us to Himself by the intercession of His Son?

However, this Gregory of Nazianzum was, nevertheless, disposed to admit some artifice of the part of Christ in the contest in which He conquered Satan. “It consisted in this, that Christ assumed the form of man, in consequence of which the devil thought that he had only to do with a being like ourselves, while the power and glory of the Godhead dwelt in him.”

In the above quotations, Christ’s death is identified with a ransom. This is surely proper. We also read that this ransom was not paid out to the devil. And, of course, this, too, is correct. Now the question is asked whether it was paid to the Father, and also whether the Father needed it. And, although Gregory writes that the Father did not need this ransom price of the blood of His Son, yet the Scriptures surely teach us that this ransom was demanded by the justice and righteousness of the Lord.

Although the idea of Gregory of Nyssa, that God defrauded the devil by a dishonest exchange, was opposed in this form by Gregory of Nazianzum, yet it prevailed for some time under different modifications. In support of this Hagenbach has the following:

The doctrine received an essential modification in the statement of Augustine (De Trin. XIII.), that the devil, who had overstepped his power, was conquered in the struggle. He had overstepped his power in this, that he thought he could treat the sinless Jesus as a slave, like the other sons of Adam, which last, in fact, belonged to him as prisoners, according to the rights of war. Now, too, he lost the right to the latter, so far as they belong to Christ. (This, too, according to Gieseler, was the view of Hilary of Poitiers, Leo the Great, and Gregory the Great. Another representation was this—redemption was the result of a conflict in which Jesus conquered the devil. He conquered him so far as this, that the devil could not seduce him to commit the least sin; by this victory he made amends for the defeat suffered in Adam, and thus broke the dominion which the devil had on the ground of this defeat. This view is found in Hilary, Leo the Great, Gregory the Great, and, among the Greeks in Theodoretus).

Also, in this second period of the Church in the New Dispensation, the idea of a penalty endured on the part of God gained the preponderance, after its advocacy by Athanasius, the renowned church father who opposed Arius. According to this idea, God had threatened to punish transgressors with death, and thus could not but fulfill His threatening. But, on the other hand, it was not in accordance with the character of God, that rational beings, to whom He had imported His own Spirit (Logos) should fall from their first state in consequence of an imposition practiced upon them by the devil. This was quite as contrary to the goodness of God as it would have been contrary to His justice and veracity not to punish the transgressor (Here the premises of the later theory of Anselm!). When the Logos perceived that nothing but death could save-man from ruin, He assumed a human body, because the Logos Himself, i.e., the immortal Son of God, could not die. He offered his human nature as a sacrifice for all, and fulfilled the law by His death. By it He also destroyed the power of the devil. The reasoning was thus: God threatened death to man as a penalty for disobedience; this threat could not be unfulfilled, if God be true; but, on the other hand, God’s love to man forbade the destruction of all men. And so the Lord adopted the expedient of allowing Jesus to die instead of man, so that both His truth and His love might be inviolate. It seems to me that this presentation could easily lead to what was later developed and known as the governmental theory of the death of Christ.

According to Hagenbach, we also find the subjective mode of regarding the death of Christ. This includes not only the ethical (in which the death of Christ is viewed as a pattern for our imitation), but also the typical and symbolical (mystical), reposing upon the idea of an intimate connection of the whole human race with Christ as its head. In support of this, he quotes Gregory of Nazianzum as follows:

In this above quotation of Gregory of Nazianzum we hear and read expressions that we know to be Scriptural and are dear to our hearts. Of course, I refer to the idea of an intimate connection of the human race with Christ as its head. Christ ascended the cross and has taken me with Him; He nailed my sin to that cross. God became man, and died, that we might live; we have died with Him, to be purified; we are raised from the dead, since we have died with Him; we are glorified with Him, because we have risen with Him from the grave. It is true that the sentiment was also expressed that Christ suffered and died for the entire human race. However, the fathers did not enter into this question in a thorough sense of the word. That would come later. It would come when the enemies of the truth would compel the church of Christ to give a careful analysis and definition of the cross of Calvary. Indeed, when we say that we died, were buried, raised from the dead and glorified when Christ died, was buried, raised from the dead and glorified, we must come to the Scriptural truth that our Lord Jesus Christ suffered and died only for His own; otherwise these expressions simply do not make any sense. But to this we will call attention in later articles. 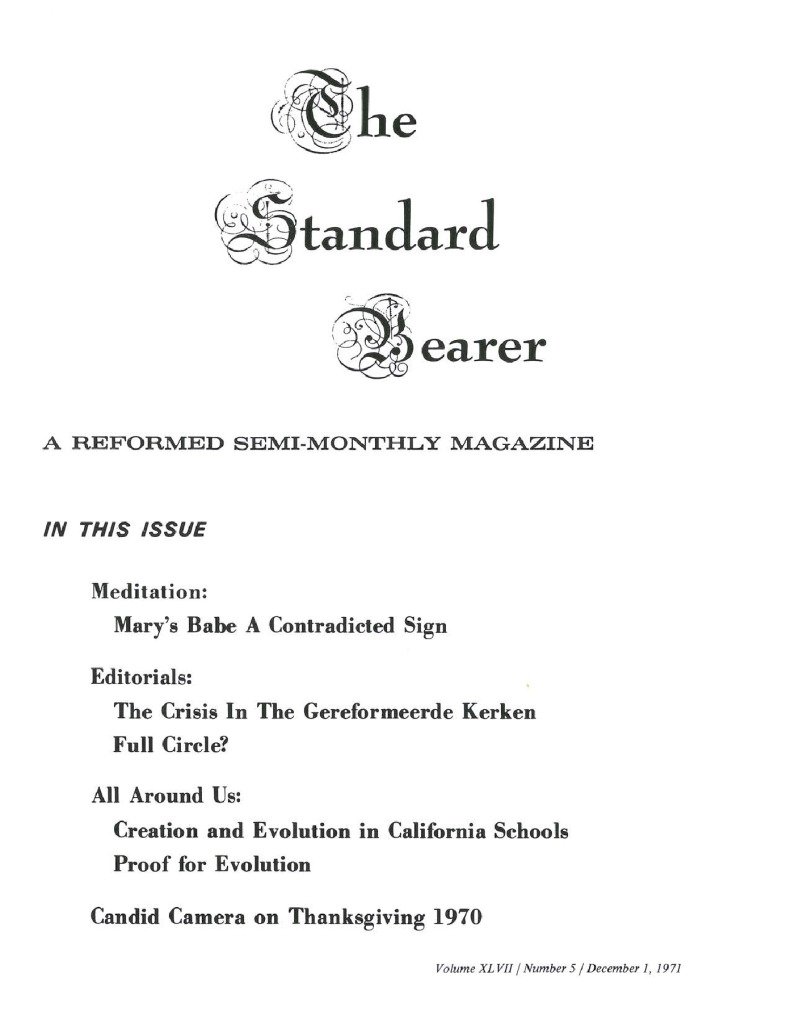