The Doctrine Of Atonement (Reformation Period)

The Doctrine Of Atonement (Reformation Period)

We were busy, in our preceding article, with a discussion of Art. V of the Rejection of Errors of Head II of the Canons. Let us quote this article again:

Who teach: That all men have been accepted unto the state of reconciliation and unto the grace of the covenant, so that no one is worthy of condemnation on account of original sin, and that no one shall be condemned because of it, but that all are free from the guilt of original sin. For this opinion is repugnant to Scripture which teaches that we are by nature children of wrath.

We concluded our preceding article by calling attention to two statements in this fifth article, namely, that all men have been accepted unto the grace of the covenant, and that no one is worthy of condemnation on account of original sin. No one shall be condemned because of it, but all are free from the guilt of original sin. These views of the Arminians follow inexorably from their teachings, and they are also very prevalent today. And we promised to call attention to this in this article.

Now we must understand that when the Arminians speak of all men as having been accepted unto the state of reconciliation and of being accepted unto the grace of the covenant, they mean something which is completely contrary to what the Reformed faith means and that which is set forth in the divine and infallible Scriptures. Indeed, the Remonstrants also speak of the sinner that he has been accepted into the state of reconciliation and into the grace of God’s covenant. But notice, if you please, what the Arminians believe as set forth here in these articles in this Rejection of Errors of Head II of our Canons. They believe that God the Father has ordained His Son i to the death of the cross without a certain and definite decree to save any, so that the necessity, profitableness, and worth of what Christ has merited by His death might have existed, and might remain in all its parts complete, perfect and intact, even if the merited redemption had never in fact been applied to any person. Then, they taught that it was not the purpose of the death of Christ that He should confirm the new covenant of grace through His blood, but only that He should acquire for the Father the mere right to establish with man such a covenant as He might please, whether of grace or of works. This means that Christ merely merited for the Father the right to enter into whatever negotiations with the sinner He would desire. In Article III we read that, according to the Arminians, Christ by His satisfaction did not merit either salvation itself for anyone, or faith whereby this satisfaction of Christ unto salvation is effectually appropriated. In other words, the salvation of the sinner is separated, divorced from the cross. Christ merely merited for the Father the authority or the perfect will to deal again with man, and to prescribe new conditions as He might desire, obedience to which, however, depended upon the free will of man, so that it therefore might have come to pass that either none or all should fulfill these conditions. And what these new conditions are is set forth in Article IV. This new covenant of grace, into which the sinner has been accepted by God through the death of Christ, does not consist herein that we by faith, in as much as it accepts the merits of Christ, are justified before God and are saved, but in the fact that God having revoked the demand of perfect obedience of the law, regards faith itself and the obedience of faith, although imperfect, as the perfect obedience of the law, and does esteem it worthy of the reward of eternal life through grace. O, yes, the Arminians speak of this covenant as the new covenant of grace. But they are merely playing with words. It is not really a covenant of grace, but another covenant of works. The sinner is not saved because Christ died for him, but only because he believes. God regards a sinner’s faith, although very imperfect, as worthy of everlasting life and glory. Faith is the new condition which the Lord now prescribes as the way of salvation.

And, according to the Arminians, all men have been accepted unto the grace of the covenant. How strikingly similar this view is to that which is being taught and proclaimed, today! All men are equally in the covenant of the Lord. All men are heirs of everlasting life and glory. All children receive this divine assurance at their baptism. Every child receives at baptism the assurance from the Lord that the Lord—loves him and desires to save him. All men have been accepted into the grace of the covenant. There is now salvation for all. The Lord would have all men be saved and come to the knowledge of salvation. And we do well to understand that this is Arminian heresy and condemned by our fathers of Dordt. How important it is that we understand our confessions and that we put forth every effort to familiarize ourselves with these confessions!

To this must be added that the Arminians, according to this fifth article, also taught that no one is worthy of condemnation on account of original sin, and that no one shall be condemned because of it, but that all are free from the guilt of original sin. This, too, the Remonstrants were compelled to believe. Also this is currently taught and proclaimed today. Years ago, in the Christian Reformed Church, they spoke of a special baptismal grace, a grace which was not regenerating, but it enables the recipient of it to be able to accept the offer of salvation when later in his life that offer of salvation was presented to him in the preaching of the gospel. They were compelled to teach this. You see, they taught that all the children were in the covenant of the Lord, heirs of the promise, objects of divine love and favor, and that the offer of salvation would be extended to him in the preaching of the gospel. But they were aware of the fact that the Scriptures taught that all are born dead in sins and in trespasses, and that a dead sinner was in no position to accept this offer that was extended to him. So they taught this special baptismal grace. This grace did not regenerate him, but it did enable him to accept this offer of salvation. This, we understand, was nothing else than Pelagianism, the teaching that the sinner is not dead in sins and in misery. A sinner that is able to accept salvation, without the renewal of the heart, is certainly not dead in sin and in misery.

The Remonstrant was compelled to teach what is held before us in this fifth article. After all, this new covenant, as we have already observed, is nothing else than a covenant of works. The new condition which the Lord now prescribes is the condition of faith. The Arminian was forced to teach this. Notice, please, that they taught that no one is worthy of condemnation on account of original sin. So, they denied the Scriptural truth of original guilt. The truth of original guilt means that the sin of Adam is imputed to the entire human race and that all men are held accountable for the sin of Adam. But this also implies the denial of original pollution. Of course! The truths of original guilt and original pollution are inseparably connected. The sinner is born in original pollution, is born dead in sins and in trespasses because of his original guilt. If he be not guilty when born, he cannot be born in pollution and corruption. And, of course, the Arminian was compelled to deny original pollution. The new covenant of grace into which all sinners have now entered through the death of Christ demands this. This is really another covenant of works. But then it follows that the sinner must also be able to fulfill this new condition. So, the sinner is not worthy of condemnation on account of original sin, and neither is he born in original pollution and corruption. This, we understand, is Pelagianism, the heresy that denies the Scriptural truth of original sin. How true it is that the denial of one truth must inexorably lead to the denial of all other fundamental truths of the Word of God. The denial of man’s corruption, also taught today, is not Reformed, but Arminian and Pelagian. Let us always bear this in mind.

However, the Arminians also deny, in this connection, another fundamental truth of the Word of God. Mind you, they say that all men have been accepted into the state of reconciliation. And then they teach that no one is worthy of condemnation on account of original sin, and they also taught that no one is born in original pollution and corruption. According to the Remonstrant, therefore, the sinner is held accountable only for his actual sins. He is not charged with the sin of Adam. That sin of Adam is not charged against him. That he perishes is only because of the actual sins he himself commits. But this is surely contrary to the Word of God. The Word of God teaches us that the blood of Christ has washed us of all sins and iniquity. The Arminian teaches that all men have been accepted into the state of reconciliation. Of course, we now understand that this expression, “accepted into the state of reconciliation,” has a meaning completely foreign to the Reformed faith and the Divine Scriptures. But the Word of God teaches us that the state of reconciliation implies the washing away of all sin. In the state of reconciliation, based upon the perfect work of Christ upon the cross of Calvary, we are free from all guilt, not only from our original guilt, but also from all the actual sins which we commit in the midst of our earthly tabernacle. The Arminians, therefore, make an unscriptural distinction between our original sin and our actual sins. It stands condemned, therefore, also upon the basis of this Scriptural truth. 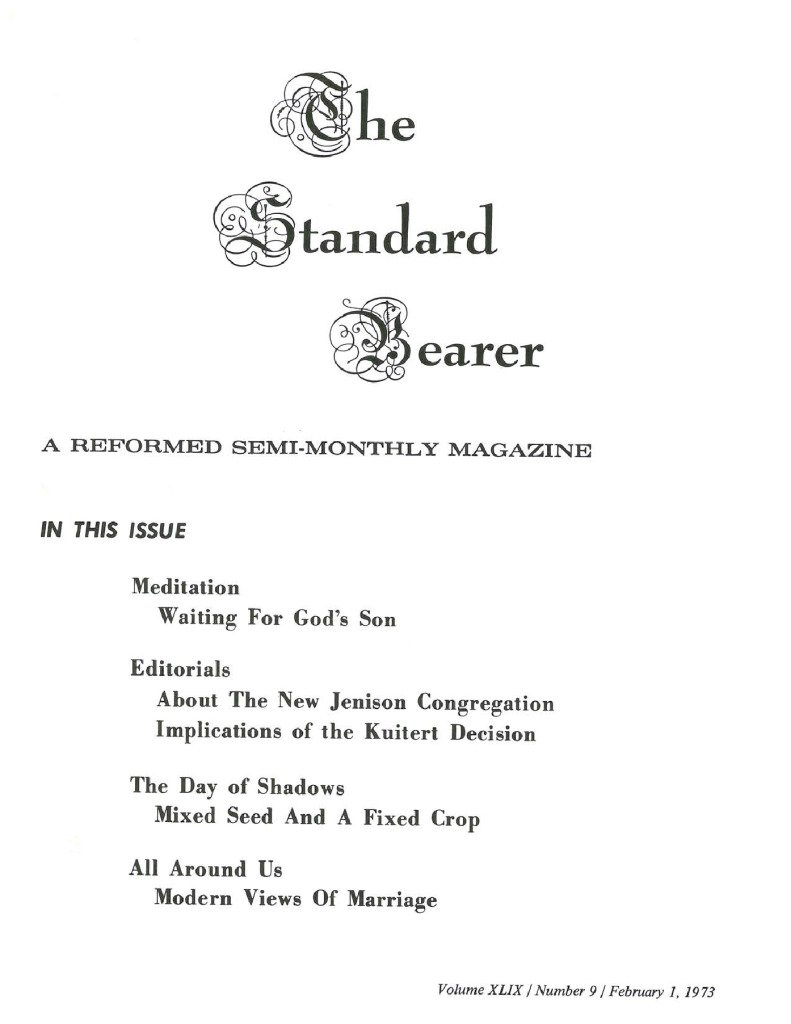