The Doctrine of Atonement (Reformation Period)

The Doctrine of Atonement (Reformation Period)

It is also of interest to read the reaction of the Netherlands professors to the position of the Remonstrants with respect to the atonement of Christ and their own view of the same. These professors were Gomarus, Polyander, Thysius and Walleus. Sybrandus Lubbertus, another professor, read this judgment of his colleagues and expressed his agreement with it.

First of all, these professors, in three propositions, set forth the greatness of the satisfaction of Christ and that this ransom of the cross must be proclaimed to all men without distinction.

We confess that the merit and the power of the death and the satisfaction of Christ is so worthy and of such great value, not only because of its completeness but also because of the infinite worthiness of His persons, that the same (a) is not only sufficient to blot out the sins of all men, even of the greatest, but. also to save all the descendants of Adam, even though there were many more, if they but embrace the same with a true faith.

God has purchased His Church with His own blood.

How much more shall the blood of Christ, who through the eternal Spirit offered Himself without spot to God, purge your conscience from dead works to serve the living God?

Forasmuch as ye know that, ye were not redeemed with corruptible things, as silver and gold, from your vain conversation received by tradition from your fathers; But with the precious blood of Christ, as of a lamb without blemish and without spot.

The blood of Christ cleanses us from all sins.

For God so loved the world, that He gave His only begotten Son, that whosoever believeth in Him should not perish, but have everlasting life.

Even the righteousness of God which is by faith of Jesus Christ unto all and upon all them that believe: for there is no difference.

And such were some of you (namely Idolaters, adulterers, thieves, covetous); but ye are washed, but ye are sanctified, but ye are justified in the name of the Lord Jesus, and by the Spirit of our God.

Neither need we doubt but that this has been the meaning and the purpose of God the Father, delivering His Son; and of Christ, delivering Himself, that He Should pay such a great ransom. For all that Christ has accomplished by His death, He has done that according to His Father’s and His own purpose and design.

a. I seek not My will, but the will of the Father, who has sent me;

As the Father gave Me commandment, even so I do;

And this has never been denied by those of orthodox sentiment, that to Christian peoples and to all those to whom the Gospel is proclaimed, this same ransom of Christ must be proclaimed as such and without distinction, and offered in the name of Christ, and this seriously and according to the counsel of the Father, in the meantime leaving His hidden judgments to God, Who distributes and appropriates this grace to as many and far as He wills, and to whom He wills.

Be it known unto you therefore, men and brethren, that through this man is preached unto you the forgiveness of sins: and by him all that believe are justified from all things, from which ye could not be justified by the law of Moses.

Now then we are ambassadors for Christ, as though God did beseech you by us: we pray you in Christ’s stead, be ye reconciled to God.

And some of them were men of Cyprus and Cyrene, which, when they were come to Antioch, spake unto the Grecians, preaching the Lord Jesus. And the hand of the Lord was with them: and a great number believed, and turned unto the Lord.

I have planted, Apollos watered; but God gave the increase.

The Spirit bloweth where it listeth.

No man can say that Jesus is the Lord, but by the Holy Ghost.

But if you view the peculiar and particular purpose, and the saving power of the death of Christ, then we declare that Jesus Christ, according to the counsel of the Father and His own, did not die effectually for the reprobates, but only for the elect and who shall believe, namely, in order that He would not only obtain for them the forgiveness of sins and reconciliation with God through His merits, but that He would also impart to them His powerful grace, by which He would actually make us partakers of them.

Having set forth these propositions, the Netherlands professors then proceed to base view upon Scripture and logical reasoning based upon the Scriptures. They quote Matt. 1:21, John 10, Acts 20:28, Eph. 5:25 and Rev. 5:8, 9. Their references to Matt. 1:21and John 10 are understandable. Interesting is their observation in connection with Rev. 5:8, 9: “And when he had taken the book, the four beasts and four and twenty elders fell down before the Lamb, having every one of them harps, and golden vials full of odors, which are the prayers of saints. And they sung a new song, saying, Thou art worthy to take the book, and to open the seals thereof: for thou wast slain, and hast redeemed us to God by thy blood out of every kindred, and tongue, and people, and nation.” Commenting upon this passage, the professors remark that it cannot be said of them for whom Christ died to have been redeemed out of all peoples and nations if the Lord died for all men, head for head.

Secondly, in support for their contention that Christ died only for His own elect, the Netherlands professors observe that Christ died for His own effectually, died for them as their Head; this implies that He died for them in the sense that He delivered them from the guilt of death. In support of this they remark that otherwise it would be impossible for God to condemn and punish them for their sins. This reasoning, too, cannot be refuted. It is surely easily understandable. If Christ died for all men, and He died atoningly, then He paid for the sins of all men. Then God, of course, cannot punish any man for sins committed, inasmuch as they have been blotted out by the blood of the cross. However, this also means that the doctrine of a universal atonement is a contradiction in terms. That Christ died for those who perish means that He did not atone for their sins. And this means that, according to the Arminian conception of the cross of Calvary, nothing really happened upon the cross of Golgotha.

Thirdly, these Netherlands professors make an interesting observation concerning the promises of Holy Writ. They speak of those to whom the promises were committed, namely the promises given in the Old Testament, that Christ would be delivered into death, and that the fruit of it and the saving benefits would accrue through Him to the Congregation. They declare that Christ died effectually only for them and that these promises were committed only to the elect. In support of this they refer to Rom. 9:7-8: “Neither, because they are the seed of Abraham, are they all children: but, in Isaac shall thy seed be called. That is, They which are the children of the flesh, these are not the children of God: but the children of the promise are counted for the seed.

Finally, in support of their contention that Christ died only for the elect, these professors quote several Scriptural passages. They declare, moreover, that, according to the Word of God, Christ never knew the reprobates, Matt. 7 and Matt. 25, is not merciful to them but hates them, Rom. 9, and also that the reprobates are all hardened. They also add that these expressions of Holy Writ permit but one interpretation. One may interpret these passages as gently as possible, according to these professors, but they cannot be interpreted in any other way than that Christ died exclusively for the elect.

These professors conclude their opinion by rejecting certain Arminian presentations of the death of Christ. We need not call attention to these Arminian views at this time. They taught, among other things, that Christ did not die specifically for the elect, but only for their good, that the possibility exists that none for whom Christ died would be saved, and that Christ did not arise from the dead for all for whom He died. We will have opportunity to call attention to these errors of the Remonstrants when we treat what the Canons have to teach us in their second head of doctrine. It is clear, however, generally speaking, that the delegates to the Great Synod of Dordt were opposed to any universal conception of the cross and death of Christ. 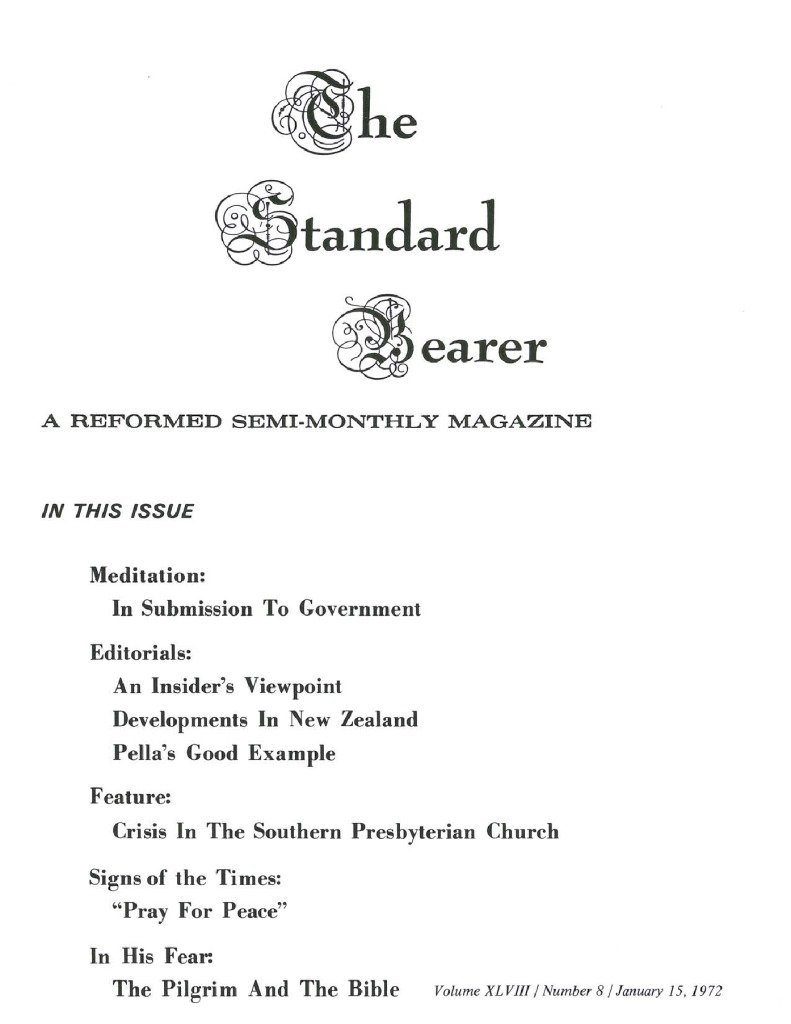