Continuing with the history of the doctrine of the atonement as set forth during the early years of the Church in the New Dispensation, in the years, 80-254, we would now call attention to Tertullian Concerning this Church Father, we read in Vol. III of the Ante-Nicene Fathers the following, and we would quote:

with apparent harshness, he applied to her people the epithet: dogs, with which the children of Israel had thought it piety to reproach them. When He accepted her faith and caused it to be recorded for our learning, He did something more: He reversed the curse of the Canaanite and showed that the Church was designed “for all people,” Catholic alike for all time and for all sorts and conditions of men.

Thus the North-African Church was loved before it was born: the Good Shepherd was gently leading those “that were with young.” Here was the charter of those Christians to be a Church, who were then Canaanites in the land of their father Ham. It is remarkable indeed that among these pilgrims and strangers to the West the first elements of Latin Christianity come into view. Even at the close of the Second Century the Church in Rome is an inconsiderable, though prominent, member of the great confederation of Christian Churches which has its chief seats in Alexandria and Antioch, and of which the entire Literature is Greek. It is an African presbyter who takes from Latin Christendom the reproach of theological and literary barrenness and begins the great work in which, upon his foundations, Cyprian and Augustine built up, with incomparable genius, that Carthaginian School of Christian thought by which Latin Theology was dominated for centuries. It is important to note (1.) that providentially not one of these illustrious doctors died in Communion with the Roman See, pure though it was and venerable at that time; and (2.) that to the works of Augustine the Reformation in Germany and Continental Europe, was largely due; while (3.) the specialties of the Anglican Reformation were, in like proportion, due to the writings of Tertullian and Cyprian. The hinges of great and controlling destinies for Western Europe and our own America are to be found in the period we are now approaching.

The merest school-boy knows much of the history of Carthage, and how the North Africans became Roman citizens. How they became Christians is not so clear. A melancholy destiny has enveloped Carthage from the outset, and its glory and greatness as a Christian See were transient indeed. It blazed out all at once in Tertullian, after about a century of missionary labors had been exerted upon its creation: and having given a Minucius Felix, an Arnobius and a Lactantius to adorn the earliest period of Western Ecclesiastical learning, in addition to its nobler luminaries, it rapidly declined. At the beginning of the Third Century, at a council presided over by Agrippinus, Bishop of Carthage, there were present not less than seventy bishops of the Province. A period of cruel persecutions followed, and the African Church received a baptism of blood.

Tertullian was born a heathen, and seems to have been educated at Rome, where he probably practiced as a jurisconsult. We may, perhaps, adopt most of the ideas of Allix, as conjecturally probable, and assign his birth to A.D. 145. He became a Christian about 185, and a presbyter about 190. The period of his strict orthodoxy very nearly expires with the century. He lived to an extreme old age, and some suppose even till A.D. 240. More probably we must adopt the date preferred by recent writers, A.D. 220.

The reader will notice, from the above quotation, that “the period of Tertullian’s orthodoxy very nearly expires with the century.” The writer of the above words states that it seems to be the fashion to treat of Tertullian as a Montanist and only incidentally to celebrate his services to the Catholic (not to be confused with Roman Catholic) Orthodoxy of Western Christendom; but he wishes to reverse this and emphasize Tertullian’s services and contributions to the Catholic Orthodoxy of Western Christendom. Be this as it may, he is recognized as a contributor to the defense of the gospel, and it is in these writings that we are interested.

We have already called attention to the fact that Reinhold Seeberg remarks that these early Church Fathers certainly emphasized that the sufferings and death of Christ were the fulfillment of prophecy. This also applies to the writings of Tertullian. In his writing against Marcion, Tertullian writes (Vol. III of the Ante-Nicene Fathers, in connection with the steps of the passion of the Saviour as predetermined prophecy):

In like manner does He also know the very time it behooved Him to suffer, since the law prefigures His passion. Accordingly, of all the festal days of the Jews He chose the Passover. In this Moses had declared that there was a sacred mystery (sacrament—H.V.): “It is the Lord’s Passover.” How earnestly, therefore, does He manifest the bent of His soul: “With desire have I desired to eat this Passover with you before I suffer.” What a destroyer of the law was this, who actually longed to keep its Passover! Could it be that He was so fond of Jewish lamb? But was it not because He had to be “led like a lamb to the slaughter; and because, as a sheep before her shearers is dumb, so was He not to open His mouth,” that He so profoundly wished to accomplish the symbol of His own redeeming blood? He might also have been betrayed by any stranger, did I not find that even here too He fulfilled a Psalm: “He who did eat bread with Me hath lifted up his heel against Me.” And without a price might He have been betrayed. For what need of a traitor was there in the case of one who offered Himself to the people openly, and might quite as easily have been captured by force as taken by treachery? This might no doubt have been well enough for another Christ, but would not have been suitable in One who was accomplishing prophecies. For it was written, “The righteous one did they sell for silver.” The very amount and the destination of the money, which on Judas’ remorse was recalled from its first purpose of a fee, and appropriated to the purchase of a potter’s field, as narrated in the Gospel of Matthew, were clearly foretold by Jeremiah: “And they took the thirty pieces of silver, the price of Him who was valued, and gave them for the potter’s field.”

In the rest of this quotation Tertullian opposes the teachings of a certain Marcion. Marcion distinguished between Christianity of the New Dispensation and Judaism of the Old Dispensation. He did not believe that there is only one supreme God Who rules over all, the evil as well as the good; and, as far as the Lord Jesus Christ is concerned, it was his contention that Christ merely appeared and that He did not really take upon himself the flesh and blood of men. Tertullian calls attention to the words of Christ in the upper room: “This is my body.” He maintains that the bread in Christ’s hand was a figure of His own body, but that there could not have been a figure unless there were first a veritable body. According to Tertullian, an empty thing, or phantom, is incapable of a figure.

Then, in a paragraph following upon the quotation above, Tertullian continues to show that the sufferings and death of Christ are the fulfillment of prophecy:

“Woe,” says He, “to that man by whom the Son of man is betrayed!” Now it is certain that in this woe must be understood the imprecation and threat of an angry and incensed Master, unless Judas was to escape with impunity after so vast a sin. If he were meant to escape with impunity, the “woe” was an idle word; if not, he was of course to be punished by Him against whom he had committed the sin of treachery. Now, if He knowingly permitted the man, whom He deliberately elected to be one of His companions, to plunge into so great a crime, you must no longer use an argument against the Creator in Adam’s case, which may now recoil on your own God: either that he was ignorant, and had no foresight to hinder the future sinner; or that he was unable to hinder him, even if he was ignorant; or else that he was unwilling, even if he had the foreknowledge and the ability; and so deserved the stigma of maliciousness, in having permitted the man of his own choice to perish in his sin.

This, and what immediately follows, incidentally, is an interesting passage. Tertullian would maintain in this quotation the truth that the Lord is God. He, evidently, wants no part of that conception that would present Christ as either being ignorant of Judas’ design or of being unable to hinder the son of perdition in his foul deed of betraying the Christ. And this church father also applies this truth to the case of Adam. But now we continue with this quotation:

I advise you therefore (willingly) to acknowledge the Creator in that god of yours (Tertullian is writing this against Marcion), rather than against your will to be assimilating your excellent god to Him. For in the case of Peter, too, he gives you proof that he is a jealous God, when He destined the apostle, after his presumptuous protestations of zeal, to a flat denial of him, rather than prevent his fall. The Christ of the prophets was destined, moreover, to be betrayed with a kiss, for He was the Son indeed of Him who was “honored with the lips” by the people. When led before the council, He is asked whether He is the Christ. Of what Christ could the Jews have inquired but their own? why, therefore, did He not, even at that moment, declare to them the rival (Christ)? You reply, In order that He might be able to suffer. In other words, that this most excellent god might plunge men into crime, whom he was still keeping in ignorance. But even if he had told them, he would yet have to suffer. For he said, “If I tell you, ye will not believe.” And refusing to believe, they would have continued to insist on his death. And would he not even more probably still have had to suffer, if he had announced himself as sent by the rival god, and as being, therefore, the enemy of the Creator? It was not, then, in order that He might suffer, that He at that critical moment refrained from proclaiming Himself the other Christ, but because they wanted to extort a confession from His mouth, which they did not mean to believe even if He had given it to them, whereas it was their bounded duty to have acknowledged Him in consequence of His works, which were fulfilling their Scriptures. . . . But yet for all this, He with a solemn gesture says, “Hereafter shall the Son of man sit on the right hand of the power of God.” For it was on the authority of the prophecy of Daniel that He intimated to them that He was “the Son of man,” and of David’s Psalm, that He would “sit at the right hand of God.”

It is evident from this passage also that Tertullian viewed the passion of Christ as the fulfillment of prophecy. However, this church father also has something to say about the nature of our Lord’s atonement on Calvary, although it is true that clarity of thought with respect to the cross is not fully developed until later. 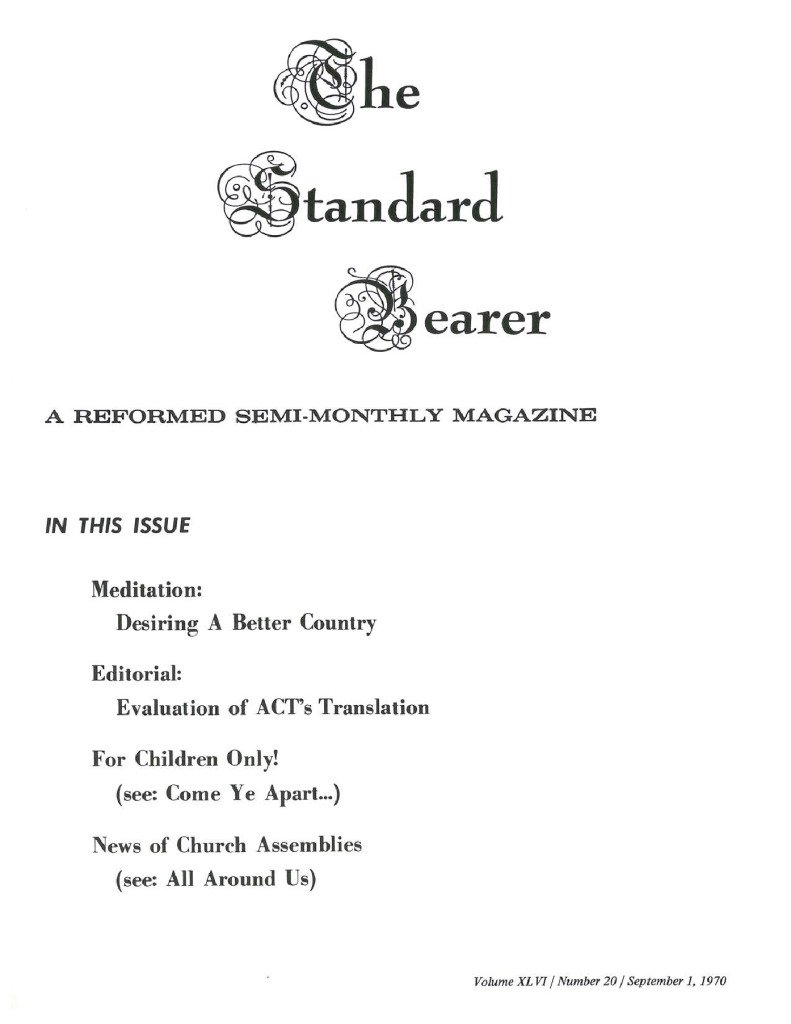