Continuing our brief discussion of the Canons in connection with the Second Head which treats the atonement of our Lord Jesus Christ, we now call attention to Article VI of the Second Head of these Canons:

And, whereas many who are called by the gospel, do not repent, nor believe in Christ, but perish in unbelief; this is not owing to any defect or insufficiency in the sacrifice offered by Christ upon the cross, but is wholly to be imputed to themselves.

Although it is true that these heads of doctrine in the Canons of Dordt are followed by a section in which the Synod rejects the errors of the Remonstrants, and that in these heads of doctrine the fathers first set forth the truth positively, yet also in these positive articles our fathers set themselves against the errors of the Arminians. This is also true of Article VI. The Arminians, we understand, accused the Reformed view of being unable to preach the gospel to all the hearers of it. In a way, the Remonstrants are correct. Of course, according to the Remonstrants the preaching of the gospel is an offer of salvation to all the hearers of it. And, if it be true that the preaching of the gospel be such an offer, then it must follow that, believing in the Reformed view of salvation, in sovereign predestination and particular atonement, we cannot preach such a gospel to all the hearers of it.

Be this as it may, is it true, as suggested in this sixth article, that the failure of many sinners to be saved is due to any defect or insufficiency in the sacrifice offered by Christ upon the cross? This, according to the Remonstrants, is a fault to be laid at the door of the Reformed view of salvation. According to the Arminian, the Reformed preacher of the gospel cannot admonish all his hearers to repent and believe in the Lord Jesus Christ. And this he cannot do because he believes in an unconditional election and particular atonement of Christ upon the cross of Calvary. How can a preacher command and urge all sinners to repent and believe when God has sovereignly predestinated only some unto salvation from before the foundations of the world and when Christ has died only for some and not for all? Imagine a sinner, if you please, who, upon hearing the gospel, should feel sorry for sins, desire salvation, and knock at God’s door pleading for mercy. Would not the Lord be compelled to say unto him: “I know that you are sorry for your sins and desire pardon and salvation, but I cannot give it to you because I have not loved you and Christ has died for you, and therefore there is no salvation for you?” This is the charge which the Remonstrant hurls at the Reformed preacher of the gospel. This Reformed view must ascribe the perishing of the sinner to the insufficiency of the cross of Jesus Christ.

This charge the fathers deny in this sixth article we are now discussing. They declare that the sinner’s perishing is to be imputed wholly to himself. Is this charge of the Remonstrant true? Is this the experience of the sinner when he does not repent and believe and perishes? Indeed, no sinner has ever knocked at God’s door only to be turned away empty-handed. “Whosoever cometh unto Me I will in no wise cast out,” is the clear teaching of Holy Writ and also the experience of every repentant sinner. The blood of Christ is not insufficient. In itself, as far as its value is concerned, it is surely sufficient to blot out all the sins of all mankind. Every sin confessed is certainly blotted out by that blood. Secondly, that the sinner perishes is to be ascribed to his unbelief. Viewed subjectively, from the viewpoint of the sinner, he despises the Christ and tramples His salvation under foot. Remember, the Christ, although not offered to everyone who hears the preaching of the gospel, is nevertheless set forth before him in that preaching of the gospel. And the perishing sinner responds to that preaching, reveals the attitude of his heart and mind to that Christ. He refuses to repent, because he loves the darkness rather than the light. He despises the salvation set before him, because he loves evil and corruption. He rejects the salvation of God’s fellowship and covenant, because he loves this world and the things that are below. This is the history of the wicked sinner throughout the ages, also of wicked and carnal Israel in the Old Dispensation. They could not enter into the promised land of Canaan because of their unbelief,Heb. 3:19. Their failure to enter into the promised land was not because of the terrible wilderness—God did deliver His people and carried them upon eagles’ wings. That they did not enter in was not because of the mighty heathen nations—God destroyed those nations. That they did not inherit the promise was not because they were few and weak—one of them could have set a thousand to flight. No, but viewed subjectively, from the viewpoint of the sinner, he does not repent and believe in the Christ because of his unbelief. And unbelief is never merely a matter of the mind, but also of the heart. The sinner hates God and His Christ, and it is this which prompts him in his rejection of the gospel. And it is this truth which the fathers maintain here in this sixth article. We cannot and may not preach a universal love of God; there is no universal love of God. We cannot and may not preach a universal atonement of Christ upon the cross of Calvary; Christ did not die for all men, but only for the sheep given Him of the Father from before the foundations of the world. We do and must command all men to repent and believe. And the sinner refuses to repent because of his unbelief. It is this truth which is clearly set forth in our Canons, in this sixth article of Head II.

The seventh article in this Second Head reads as follows:

But as many as truly believe, and are delivered and saved from sin and destruction through the death of Christ, are indebted for this benefit solely to the grace of God, given them in Christ from everlasting, and not to any merit of their own.

In this seventh article the fathers declare that they who believe are saved from destruction through the death of Christ. It is well to call attention to the fact that the fathers declare that they who are saved are those who believe. The Arminians, because of their wrong emphasis upon the importance of faith (according to them, a sinner is, not delivered from sin and death because of the death of Christ, inasmuch as Christ died for all men and therefore also for those who perish, but because of his faith) accused the Reformed preacher of the gospel of really having no place in his preaching for the activity of faith. According to them, the saved sinner is saved because God has elected him and because Christ has died for him, and therefore his calling to believe is relatively unimportant and without significance. The fathers, however, also in this seventh article, emphasize the importance of the activity of faith. They know very well that only they who believe in the Christ as set forth in the preaching of the gospel are saved. And they do not hesitate to state this repeatedly, also in this seventh article of Head II.

Now the fathers, in this article, speak of those whotruly believe. Do the fathers, using here the word “truly” refer to the superficial view which the Remonstrants entertain of the activity of faith? According to the Arminians, faith is a condition of salvation. According to them, faith is a condition for God’s work of salvation. After all, Christ died for every man, head for head. And the preaching of the gospel is an offer of salvation. God would have all men be saved. This means that the salvation of the sinner is dependent upon his believing, that the Lord must wait until the sinner believes, and that faith is a condition which man must fulfill prior to God’s work of salvation in him. This is the Remonstrants’ conception of faith. But the fathers must, of course, have nothing of this. And, therefore, they use the word, “truly,” emphasizing the true nature and character of faith.

The believers now are indebted for their faith, through which they are saved and delivered from sin and destruction, solely to the grace of God, given them in Christ from everlasting, and not to any merit of their own. That they believe does not in any sense of the word lie in themselves. It is not due to any merit of their own. If left to themselves they, too, would reject the gospel anti perish. Faith is not a condition of salvation, something we must fulfill before we can receive the benefits of Christ, but it is itself one of those gifts of Christ, bestowed upon God’s people in sovereign grace and mercy. The death of Christ upon the cross is not dependent for its efficacy upon the faith of a sinner, but it merited also the gift of faith. Really, we must understand, the cross does not save us because we believe, but we believed because the cross has redeemed and saved us. Faith is a fruit of the cross. And the fathers emphasize this when they speak in this article of faith as a benefit.

That we believe is to be ascribed only to the grace of God. This article emphasizes this truth. We may notice that the fathers here speak of the grace of God. This grace is the free gift of God. And we do well to note that the benefit of faith is set forth in this article as rooted in this grace, this free gift of God. This grace is the favor but also the power of the Lord whereby He bestows upon His own the benefit of faith; it is surely free. In the Scriptures it stands opposed to works, as we read it in Rom. 11:6: “And if by grace, then is it no more of works: otherwise grace is no more grace. But if it be of works, then is it no more grace: otherwise work is no more work.” So there is no merit in our salvation whatsoever.

And how the fathers emphasize that this benefit of faith is a free gift of God’s sovereign grace. We are indebted solely for this faith to the grace of God. In no sense of the word can a sinner ever boast of the fact that he believed. Besides, God gave us this grace in Christ. And notice, please, how the fathers connect our faith and salvation with our Lord Jesus Christ. It is all in Him and we receive it from Him as a free, sovereign gift. And, finally, the fathers also speak in this article of God’s eternal decree. We read that this benefit has been given us in Christ from everlasting, and this refers to Divine election. So, before we were born, from before the foundations of the world, God gave us this gift of faith in Christ. We surely had nothing to do with it! The grace of God, therefore, was ever upon us, even eternally, and there is nothing we could possibly do or need do to merit it. Salvation is of grace alone, without any merit on our part. This is the language of the fathers; this is the language of Holy Writ; and this is also the experience of every child of God as he is called out of darkness into God’s wonderful light. 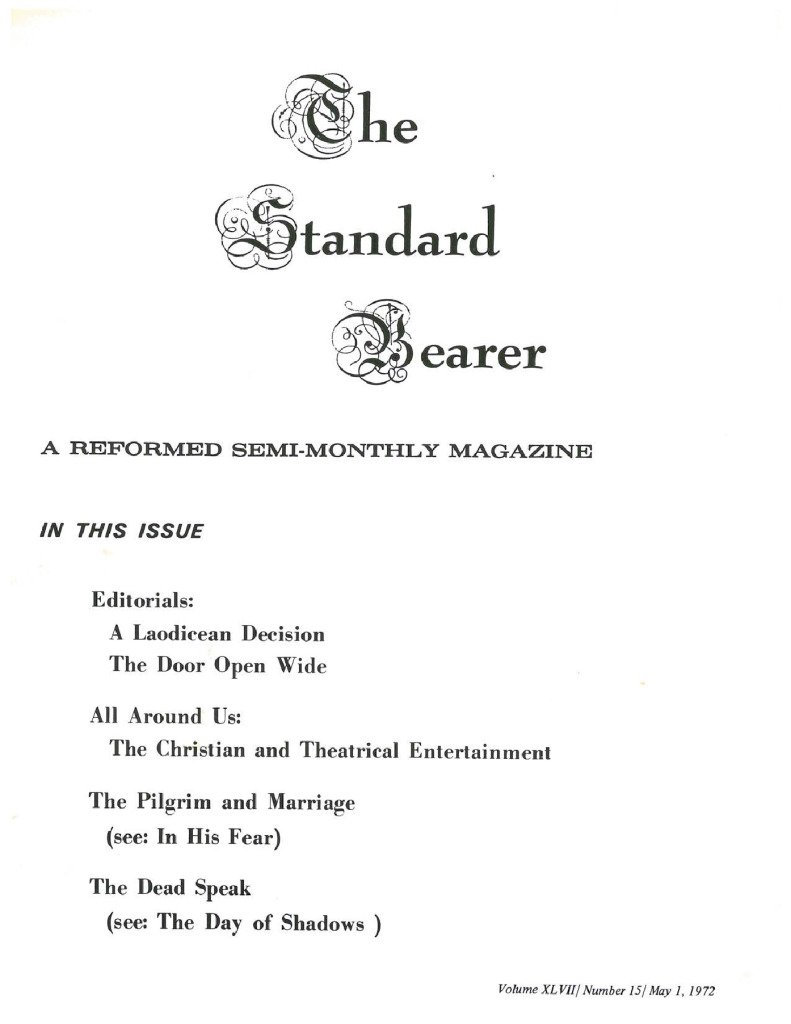