The Doctrinal Tensions “Down Under”

The Doctrinal Tensions “Down Under”

When we speak in the title of this article of doctrinal tensions “down under,” we refer to the Reformed Churches of New Zealand, to the Reformed Churches of Australia, which are also partly involved, and to the Reformed Theological College at Geelong, Australia, which is also partly involved. These three, though all related and though all involved in the doctrinal difficulties about which the Reformed and Presbyterian Fellowship of Australasia is concerned, are nevertheless distinct and separate organizations. Since we shall be referring to one or another of these organizations in the course of our discussion of these doctrinal tensions, it is necessary to get a little background information first.

The Reformed Churches of Australia (and remember that Australia, although usually considered the close neighbor of New Zealand, is some 1500 miles away) are a Reformed denomination formed chiefly of Reformed people who immigrated into Australia from the Netherlands after World War II and who had their background for the most part in the Gereformeerde Kerken of the Netherlands. These churches have the Reformed confessions, the Three Forms of Unity, as their doctrinal basis. They are sister churches of the Reformed Churches of New Zealand. Generally speaking, they might be said to be similar to the Christian Reformed denomination in our country, having also been helped during their formative years by the latter denomination. To this denomination Prof. Runia belongs. We may also mention that this denomination is distinct from the Reformed Churches of New Zealand in that it has only our Reformed confessions for a doctrinal basis, while the churches in New Zealand also acknowledge the Presbyterian creeds, the Westminster Confession and Catechisms. We may also mention in passing that there is now also a denomination in Australia known as the Presbyterian Reformed Church of Australia. This is a group of churches which separated from the Presbyterian Church of Australia in connection with the latter’s refusal to condemn a certain Professor L.G. Geering for his heresy. Our readers may recall that this was reported some time ago in All Around Us.

“It was in 1951 when several groups of young immigrants arrived in New Zealand. Contacts were made and meetings were held, some of which were of a social character, and some to meet the spiritual needs. Some of us had been unable to find a spiritual home in the churches of the land. Others never troubled to look.

“WHAT MUST WE DO?

“This was the question that was foremost in our minds.

“It was in August, 1951 when a group of immigrants from Reformed background produced their first publication. It was a simple circular informing the Dutch immigrants about the need of establishing a fellowship to be of spiritual help and guidance to one another.

“We made many friends in that time. We found many open homes, and of course there were many who did not understand us at all. But there was a desire on our part not to be isolated from the people of the land of our adoption.

“The 4th of April, 1953 became a crossroads for several of our Reformed people. The choice was before them, to either stay in or join the Presbyterian Church, or to establish the Reformed Churches of New Zealand.

“On that day the protocol was signed in Auckland by the majority of the people present. This was not a step to popularity, but a step taken in obedience to the Word of God. By taking this step we lost many friends in return for the blessing of God.”

In the same article from which the above quotation was taken, some extracts from the “protocol” are quoted. This protocol was evidently a kind of act of agreement drawn up when the Reformed Church in Auckland, New Zealand was constituted. Because these extracts furnish an insight into the origins of the Reformed Churches of New Zealand, we will also quote them:

“We have failed to find, however, a clear maintenance of Evangelical Truth of the Reformed Confessions. Particularly the Protestant Church to which we feel attracted as a result of historical union, viz. the Presbyterian Church of New Zealand, has disappointed us deeply in this respect. In this church, originally of Calvinistic origin, we have found such a freedom of teaching that much is lost of her original character.

“We are aware of the fact that many Presbyterian ministers are talented and hard working men, and that several of them are fully persuaded of the infallible truth, and divine authority of Holy Scripture, as given by inspiration of God to be the rule of faith and life, and cordially accept the subordinate standards of their church. We are convinced that in this respect the year 1901 has been a decisive year in the history of this church, and that the Declaratory Act of that year has opened the doors of the Presbyterian Church to various ‘winds of doctrine’ . . . . We are of the opinion that these doctrines, set forth in the Reformed symbols are, a.o., undeniably characteristic of the Reformed faith. . . . When we cannot trust the Words of the Bible, what in the world can we trust then? When we go on ways of such theological freedom (as in the Presbyterian Church of NZ) the standards of the church may be subordinated to the Scriptures, but then the Scriptures are subordinated to the various theological ideas of our more or less learned men.

“We realize that many people will not understand us and that we might be accused of having brought with us to NZ many church-prejudices; that we fail to appreciate the guidance of the Holy Spirit in the history of the Church, and that we are opposed to the reunion of the divided Protestant denominations.

“In reply to the first misunderstanding we state that the Church must be faithful to the Holy Scriptures and her own confessions. This is not only the way of our thinking. From the days of the Westminster Synod on, this opinion has had its convinced defenders everywhere in the English world as well. And we know that it has its advocates in New Zealand.

“If we might be accused that we do not believe the Holy Spirit is leading the Church, we like to state that that is exactly part of our faith, but only in the following interpretation: He is leading the church in Truth by means of the Scriptures as the only and infallible guide.

“That’s why we refuse to believe that the Holy Spirit could lead the church back to the errors, already known in the days when the Westminster Confession was composed. Because, by the guidance of the same Holy Spirit, they were distinguished and rejected by the composers of the said Confession.”

And thus it came about that the Reformed Churches of New Zealand were organized as a comparatively small denomination which bears partly a Reformed and partly a Presbyterian character. For the most part, these churches consist of Dutch immigrants and their descendants. Their ministers, especially at first, were mostly from the Netherlands or from the Orthodox Presbyterian Church of this country. Later they obtained ministers also from among the graduates of the Reformed Theological College at Geelong. Their form of church government is also Reformed and Presbyterian. They use the name “session” for what we call the “consistory” and the name “presbytery” for what we call the “classis.” Their broadest gathering, however, is called a “synod.” As was mentioned earlier, their confessions are not only the Heidelberg Catechism, the Belgic Confession, and the Canons of Dordrecht, but also the Westminster Confession of Faith and the Catechisms, which are of English Presbyterian origin. It is important to keep this fact in mind, partly because the Westminster Confession has a very strong and detailed chapter on the doctrine of Holy Scripture, and partly because the adherence of the New Zealand churches to the Westminster Confession plays a role in one of the points of controversy with Prof. Runia, namely, the “Sabbath question.”

It is fair to say, in the light of the above picture, that the Reformed Churches of New Zealand appear to have had a sound beginning, characterized by a genuine concern to remain true to the Reformed faith.

And now, after less than 20 years, some of the brethren in New Zealand see their Reformed heritage being threatened. They see it threatened especially by some of the public teachings of Prof. Runia. And they are especially concerned about this threat because of the fact that their future ministers are trained in part by Prof. Runia, so that they see a real danger that their churches will be corrupted if Prof. Runia is allowed to maintain these erroneous positions unhampered. Some—not all—of the brethren who are concerned about this threat have formed the Reformed and Presbyterian Fellowship of Australasia. Especially when the columns of Trowel and Sword (of which Prof. Runia is editor) were closed to their criticisms of Dr. Runia’s positions, they felt the need of sounding an alarm in the churches and of having an organization and a publication to enable them to sound such an alarm.

We expect to examine the doctrinal issues in detail in future articles. For the present, we will mention these issues as they are briefly stated in a resolution of the Fellowship at the time of its organization:

“Whereas there is indisputable evidence that Rev. Prof. K. Runia, Th.D., Professor of Systematic Theology, and Vice Principal of the Reformed Theological College, Geelong, Australia,

“1) objects to certain statements in the Confessions of the Reformed Churches of Australia (New Zealand? HCH), without presenting gravamina, (i.e. doctrine of reprobation, and the Sabbath)

“3) propounds innecessary and dangerous theses without qualification (i.e. Genesis 1-11 as ‘prophetic revelation’; Paul’s alleged Rabbinical methods of quotation and interpretation; ‘Even if we should discover that the Bible is not inerrant in every detail, we would still be faced with the message of Him Who made superhuman calims and Whose character, words and deeds attest the truth of those claims’, Calvin Theological Journal Vol. 4, No. 2, article, “Authority of Scripture”)

“THIS FELLOWSHIP DECLARES that is believes it is inconsistent with the demands of Holy Scripture to tolerate this uncertain sound in a leader of the Church of Jesus Christ, and a Professor of a Theological College to which has been committed the training of youth for the ministry.”

The Fellowship has already written much about these matters. And as might be expected, they have aroused both opposition and support. We believe that the Fellowship stands on solid ground. 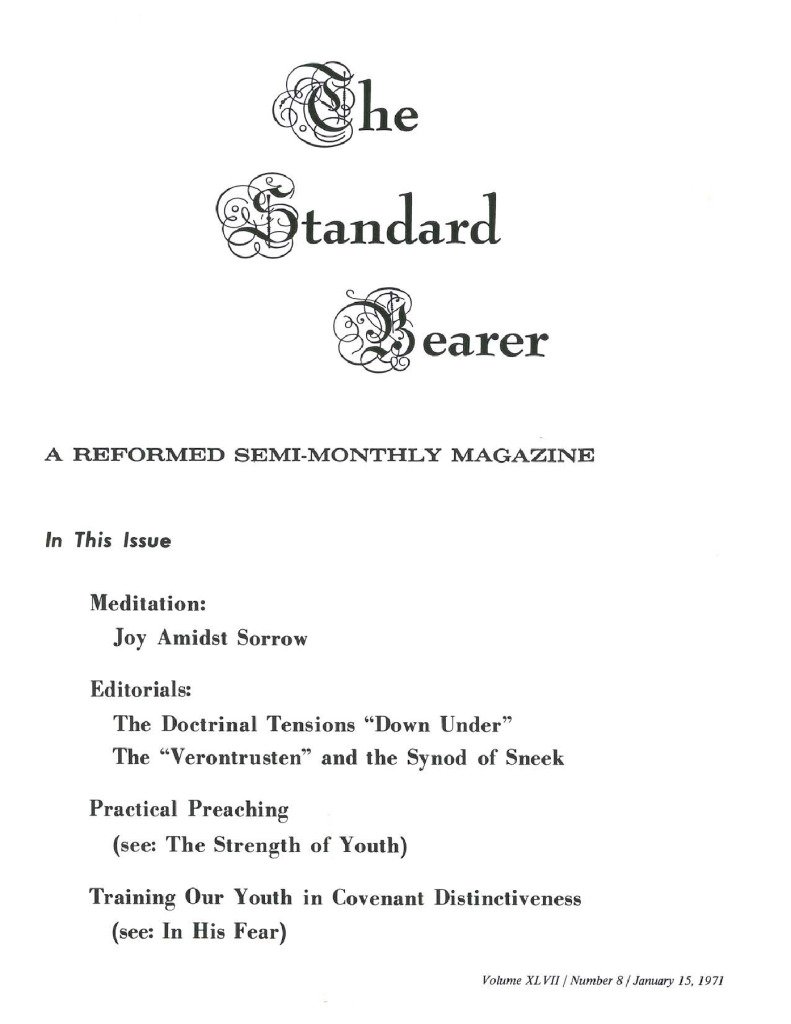