“The word which came to Jeremiah from the Lord, saying, Arise, and go down to the potter’s house, and there I will cause thee to hear My words. . . .”

The subject of the potter and the clay cannot be considered popular. It is unpopular for two reasons. In the first place, many always resents being called clay. And secondly, he resents the fact that God is called the Potter.

How difficult was Jeremiah’s called! He was called to the office of prophet by the Lord while still a youth (seeJer. 1:6), approximately at the age of twenty, in the thirteenth year of King Josiah (see Jer. 1:2, 25:3), and was active in this calling until the destruction of Jerusalem, 586 B.C. He prophesied, therefore, in an age of hopeless apostasy.

It is considered rather certain that the prophecy in this Scripture occurred before the fourth year of the reign of Jehoiakim, about twenty years before the final destruction of Jerusalem during the reign of Zedekiah. This word of God, expressed in the form of a figure, relates to Judah’s sin and impending captivity. We read that this word of the Lord comes to the house of Israel. O, Judah may complain that the Lord has no right to do what He threatened to do; however, God is the Potter and Israel has no right to appeal to the promise of God when they walk in ways of sin and iniquity.

What did Jeremiah see? He saw a potter working a work upon wheels. This figure of the potter was very common in the Old Dispensation and is still in use in Palestine and in Syria. We read of wheels because two wheels were in use, both of wood, an upper and smaller wheel on which the jar is shaped and a lower and larger wheel which was “kicked” by the potter. The same clay, usually a red clay, was used for the production of all kinds of jars and vessels which were made by the potter to suit his own purpose and fancy. And what was this potter doing? A vessel that had been made of clay was marred in the hands of the potter. It was spoiled. This potter now proceeds to make it again into another vessel, even as it seemed good to the potter to make it. This figure here, we understand, refers to the house of Israel. This is plain from verse 6. The house of Israel, Judah, the people of God in the Old Dispensation, the historical nation of Israel, is the vessel in the hands of this potter.

Now we must understand the distinction of this Scripture from Romans 9:19-21. In the first place, in Romans 9the apostle is speaking of individuals. It is clear. that those vessels of honor and dishonor are individual people. In this text in Jeremiah, however, the prophet is speaking of the nation of Israel. The vessel that had once been made, was marred, and is now being reshaped is the nation of Israel, called the house of Israel in this text. A second distinction, however, is more important. In Romans 9 the potter is represented as forming several vessels out of the same lump of clay, according to his good pleasure. Those vessels are not first marred and then reshaped into other vessels. They refer to the elect and reprobate whom God has sovereignly willed and sovereignly calls into existence. In Jeremiah, however, the one vessel is marred and then reshaped into another vessel. This is very important. The viewpoint of Jeremiah is quite different from that of Romans 9:19-21, and the purpose is also different. In Romans 9 the purpose of the apostle is to show or vindicate God’s absolute sovereignty in determining the final destiny of men, either to honor or to dishonor, to salvation and glory, or to everlasting desolation, without regard to their works. In this text, the purpose is evidently to show Israel that it has no. right to the promises of God when it walks in sin and iniquity. Israel, the broken, marred, spoiled vessel, wicked Israel had certainly merited rejection by Jehovah. It was changed, in the way of sin, from a vessel of honor into a vessel of dishonor. This is the difference between these two passages. We must remember, however, that they complement each other. They do not oppose or contradict each other. It is not true that God is sovereign in Romans 9 and that His shaping of the vessel in Jeremiah 18 is conditional. This can never be. They must be explained in the light of each other. Scripture never contradicts itself.

Indeed, God is sovereign. First, the truth of divine sovereignty is always expressed by the figure of the potter. This is surely true in Isaiah 64:8. And it is undeniably true in Romans 9:19-21. The same also applies in this text. Do we not read in verse 4: “as seemed good to the potter to make it”? And do we not read in verse 6: “Cannot the Lord do with Israel as this potter?”

In this light also this text must be understood. Indeed, the Lord had made Israel a beautiful vessel, had given it the promise to build and to plant it and give it everlasting salvation. The vessel, however, had been marred. Israel had sinned. And now the Lord will again shape it, make it a dishonorable vessel; the Lord will cast it off and destroy it.

In all this the Lord is sovereign. We must bear in mind that this text applies to Israel as a people. We read here of the house of Israel. Individual people of God can never perish. This can happen to a people. Nevertheless, whatever may be the course which is followed by a people which was a vessel of honor and becomes another vessel of dishonor, God is sovereign. God remains the Potter. God, Who sovereignly softens the most stubborn and obdurate heart, also hardens and drives the reprobate farther away from Himself; and this occurs according to His own unchangeable decree and through His irresistible will. However, when the Lord’s judgments fall upon wicked Israel, also the elect remnant, guilty with carnal Israel, suffer underneath these judgments of the Lord, but are saved through them by God’s almighty grace. Only, after the captivity Judah as a people of God was destroyed, never regained its independence, never became the people of God again.

God, however, is also righteous. Israel had sinned. True, God’s people always sin. But Israel or Judah had become corrupt as a people. The Lord now sends Jeremiah to them. He commands them to repent and also proclaims upon them the judgments of the Lord in their way of sin and evil. Israel, however, rebelled against Jehovah. They rebelled against His preaching. They objected that the Lord had given them His promises, had no right to proclaim doom upon them. Indeed, the sinner always complains against the Lord. In Romans 9 he complains: “Why doth He yet find fault? Who hath resisted His will?” In Jeremiah he appeals to the promises of God.

God, however, is the Righteous Potter. Notice carefully what we read in the verses 7-10. Do these verses emphasize a change in God? When the Lord, e.g., declares that He will destroy Nineveh because of its wickedness and later spares the penitent city, did He change? Indeed not! Nineveh changed! The Lord is unchangeable—see Isaiah 46:10, Acts 15:18, Romans 9:11. Or, do these verses speak of conditions for the divine Potter? Notice these “if” clauses here. This, however, is also impossible. Conditions for the heavenly Potter? But is He not the Potter? Does He not make of the clay whatever pleases Him? Is not our repentance His work alone? And, God should be determined by conditions? How impossible!

What do these verses mean? First, the change is not in God but in man! When the Lord declares that He will bless a church that walks in His ways and later threatens that church with His judgments when it walks in sin, is the change in God Who is holy and always blesses the righteous? Indeed, the change is in that church.

Secondly, we must bear in mind that God is addressing a people here. Indeed, the Lord does not do things tyrannically, but according to His righteousness. We must remember that what can never happen to an individual can happen to a church, also to us. Individuals cannot fall away from God; churches can fall away. A church can begin in the truth and later depart from that truth. When the Lord, then, declares to a righteous church that He will bless and curse it if it, depart from His ways, the change is not in the Lord but in that church.

Finally, this occurs according to the sovereign and unchangeable decree of Him Who is the sovereign Potter over all. When a people departs from the ways of the Lord this certainly occurs according to God’s counsel and by Him Who makes vessels of honor and dishonor. When a people turns from its evil way (as Judah did according to the remnant of election), this also surely occurs according to God’s counsel and through the power of His grace, because no man can ever repent of himself. We, however, be it according to’ the sovereign Lord Who never violates our moral-rational being but always operates sovereignly through it, are responsible beings and must give an account before the Judge of all the earth. What we are and have as churches we can lose, organically, in the line of generations. How the Scriptures emphasize this truth, as in Romans 11, in the history of Israel of the Old Dispensation!

May we, therefore, be and continue sober, watchful in prayer, that no man take our crown!

May we hold fast what we have, remain faithful even unto the end!

May the Lord preserve us by His grace according to His mercy. Preservation and perseverance . . . the latter only because of the former. And the crown of victory is sure! 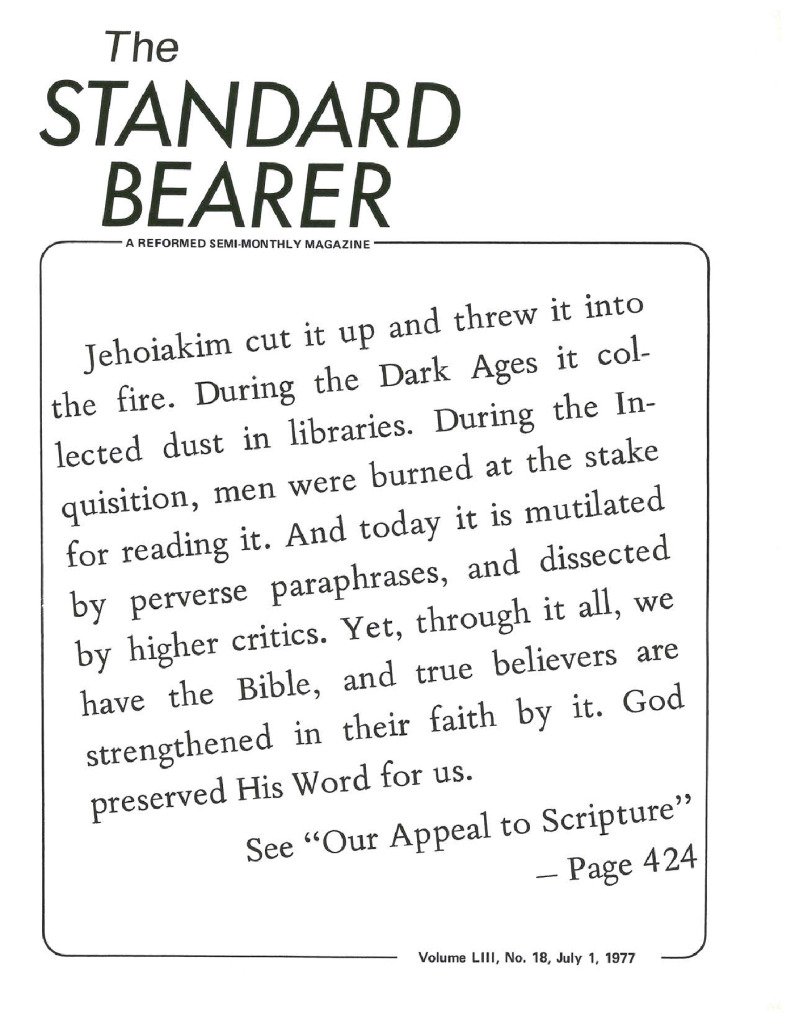