The Dignity And Authority Of Holy Scripture

The Dignity And Authority Of Holy Scripture

“We receive all these books, and these only, as holy and canonical, for the regulation, foundation, and confirmation of our faith; believing without any doubt, all things contained in them, not so much because the Church receives and approves them as such, but more especially because the Holy Ghost witnesseth in our hearts, that they are from God, whereof they carry the evidence in themselves. For the very blind are able to perceive that the things foretold in them are fulfilling.”

This faith also—and we might add, most emphatically—determines our attitude toward the Bible. We do not approach the Bible with a doubtful or questioning mind. We do not study the Scriptures to determine whether or not the things contained in them are true. Rather, rejecting without any reservation the assumptions of the higher critic we approach the Scriptures out of faith. We study the inexhaustible riches of God’s Word only to grow in our understanding and appreciation of the truth contained in them. This remains the one, glorious task of the Church, viz., to study prayerfully the Word of God in order to preach and teach that Word in all its power and beauty unto the salvation of the people of God, the destruction of the “wisdom of this world,” and the glory of God’s name! Our starting point with respect to the Holy Scriptures is that we believe “without any doubt, all things contained in them.” Any theologian (and there are many in our times!) and any denomination of churches which do not begin and end with this faith have no right to claim allegiance to the Belgic Confession.

The Creed goes on to express the ground upon which this faith of the church rests. We receive these books and these only, “not so much because the church receives and approves them as such.” This is evidently included as a statement against the Roman Catholic Church. Rome teaches that the church logically and historically precedes the Bible and thus can exist independently of the written Word. The results of this teaching are devastating. While Rome will often appeal to the authority of the Bible in defense of its teaching, the position of Rome differs radically from that of the Reformed faith. Rome has accorded (and Rome has not changed one iota from this position) tradition a place of equal honor with the Bible. Often, too, Rome appeals to tradition as the “last court of appeal.” Rome’s position is exactly the opposite of that stated in Article V. According to Rome the Biblical writings have authority only because the church receives them as holy and divine. Dr. P. Y. De Jong’s statement of nearly fifteen years ago remains true today: “The Romanists insisted that the Bible was dependent upon the church; the reformers claimed that the church was dependent upon the Bible. Here the paths parted radically and, judging by what we know today, seemingly irrevocably. Until Rome revises her conviction on this score (and a host of others, R.D.D.), all attempts at closer fellowship will suffer shipwreck.” (The Church’s Witness To The World, v. 1, p. 131)

By this statement, however, the Confession does not mean to deny either the fact or the significance of the fact that the church receives and approves of these books as Holy Scripture. In this connection we do well to face the question as to how the Canon was determined by the church. The Bible itself contains no information concerning the formation of the Canon or the fixing of it by the Church: Scripture simply asserts in clear language its divine origin and authority. We know that the thirty-nine books of the Old Testament Canon were recognized and accepted by the time of the ministry of Jesus. Christ and His disciples recognized the Canon of the Old Testament by referring to it as, “the law and the prophets.” Both Christ and the Apostles frequently quoted from the Old Testament with the words, “It is written. . .”; and they considered those Scriptures, the final authority. Thus, sometime prior to the coming of our Lord the Old Testament Canon was fixed, but not by any formal declaration of the Church. The law and the prophets were simply received spontaneously out of faith by God’s people. The late Dr. Edward J. Young, an excellent Bible-believing scholar and former Professor of Old Testament at Westminster Seminary, put it well when he said; “How the books were gathered we are not told. Apparently, no religious council in ancient Israel ever drew up a list of divine books. Rather, in the singular providence of God, His people recognized His Word and honored it from the time of its first appearance. Thus was formed the collection of inspired writings which are known as the canonical books of the Old Testament.” (An Introduction To The Old Testament, Eerdmans, pp. 39, 40) The twenty-seven books of the New Testament Canon were formally received by the early Church at its Synod of Carthage in A.D. 397. Little is known of the historical process which led to this declaration of Carthage. It is probable, that the original manuscripts were kept by the churches and individuals to whom they were addressed and that from these copies were made and distributed throughout the churches. We know too that the heretic, Marcion, played a role in all this. In support of his errant views this man rejected Matthew, Mark, John, the Acts of the Apostles, the pastoral and general epistles, and Revelation. He retained only Luke’s Gospel account and ten Pauline epistles and even these he revised. This forced the early fathers of the church to define more explicitly the canon of the New Testament. Eusebius faced the question which books the believer must recognize as holy and divine. His list of sacred writings is similar to our New Testament with the exception that he left open the question whether James, Jude, II Peter, and Revelation ought to be included. The great, orthodox father, Athanasius recognized the twenty-seven books as we have them today. Thus it was that the Church formally fixed the New Testament Canon at Carthage. We believe the Church did this as directed by the Holy Spirit which Christ promised would lead the Church into all the truth. (cf. John 14:26; John 16:13) The point, however, is that the Church did not and does not determine the Canon. The dignity and authority of the Holy Scriptures is not derived from the councils of the Church. The Church merely recognized and confessed formally and publicly the faith in God’s Word which lived in the hearts of His saints. The comment of Dr. Young concerning some modern views of the Bible expresses well what we are trying to say; “Historic Christianity, inasmuch as it is founded upon the Bible, teaches that the Bible is itself the authoritative Word of God. The Bible is authoritative, therefore, whether there is any Divine-human encounter or not. The Bible is authoritative whether or not its message is borne home to me in compelling power. It is authoritative whether I believe it or not; whether I believe in Jesus Christ or not. The Bible, according to the Christian position, is authoritative in itself; its authority resides in the fact that it is the Word of God.” (Thy Word Is Truth, Eerdmans, p. 241)

This is the emphasis of Article V when it states that we receive these books; “. . . not so much because the Church receives and approves them as such, but more especially because the Holy Ghost witnesseth in our hearts, that they are from God, whereof they carry the evidence in themselves.” The ground upon which we receive these books as the very Word of God is twofold: the Holy Spirit’s witness and the evidence which the Bible itself contains. The fact that the Church has recognized the Canon and publicly declared itself on this score only serves to strengthen the child of God in his conviction. But the deepest reason for his acceptance of the Scriptures as holy and divine, from God Himself, is the evidence contained in the Bible as that is applied in his heart by the Holy Spirit.

The evidence in the Bible itself is simply overwhelming. Anyone even vaguely familiar with the Scripture knows that the Word of God clearly witnesses to its divine origin, its dignity and authority. God spoke the ten Words of His Law and inscribed them with His finger on two tables of stone. The prophets spoke the Word of the Lord which came unto them and called the people to repentance and faith because, “thus saith the Lord.” Both Jesus and the Apostles, as we noted above, quoted the Old Testament Scriptures as the final authority. The apostles too were deeply conscious of the fact that their writings were the very Word of God. Peter, for example, ascribed divine authority to the epistles of Paul. (II Peter 3:16) Paul expresses his thanks to God concerning the Thessalonians; “. . . because, when ye received the word of God which ye heard of us, ye received it not as the word of men, but as it is in truth, the word of God, which effectually worketh also in you that believe.” (I Thess. 2:13) The same apostle confesses his and the church’s dependence upon the Holy Spirit: “And my speech, and my preaching was not with enticing words of man’s wisdom, but in demonstration of the Spirit and of power: that your faith should not stand in the wisdom of men, but in the power of God. . . . Now we have received, not the spirit of the world, but the spirit which is of God; that we might know the things that are freely given us of God. Which things we also speak, not in the words which man’s wisdom teacheth, but which the Holy Ghost teacheth. . .” (I Cor. 2:4, 5, 12, 13)

Still more, the creed asserts that the very blind are able to perceive that the things foretold in the Scriptures are fulfilling. How true that is. Before our very eyes in these last days we see the signs which herald our Lord’s return; the very events and phenomena which He and the other Scriptures foretold are happening. So it also was with the prophecies of old.

This is why Reformed believers “receive all these books . . . believing without any doubt all things contained in them.” 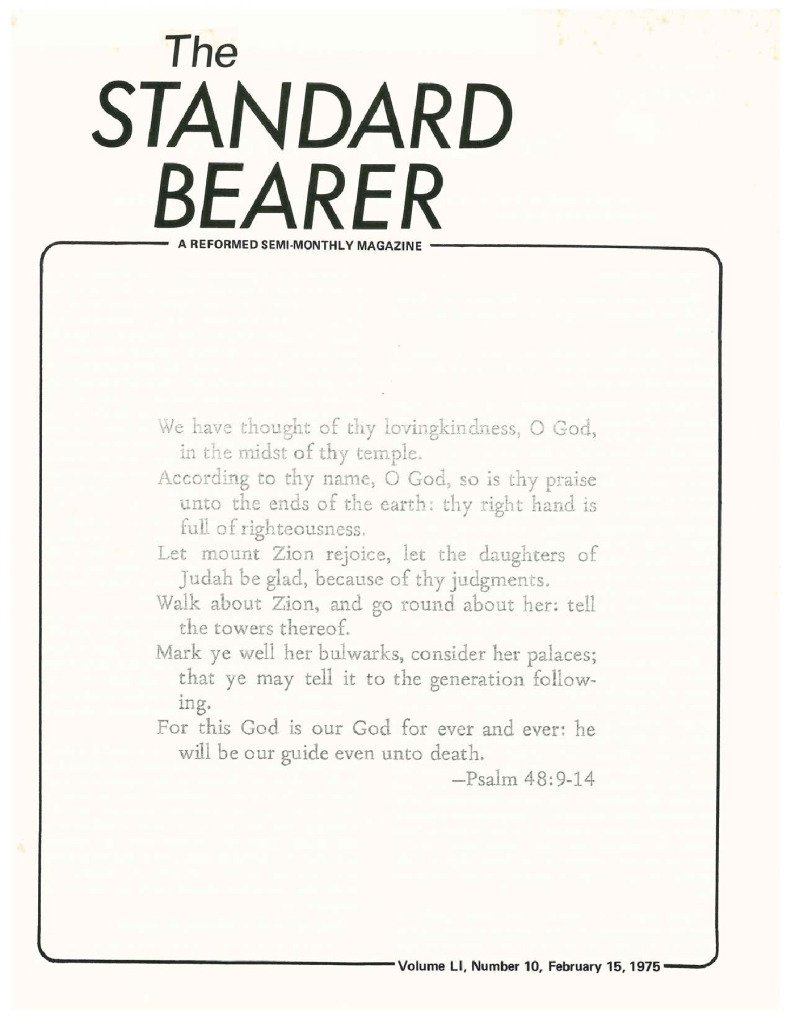